A quartet of losers, a hot chick and an alien Power Suit -- this crowd-funded action spoof is a midwinter surprise 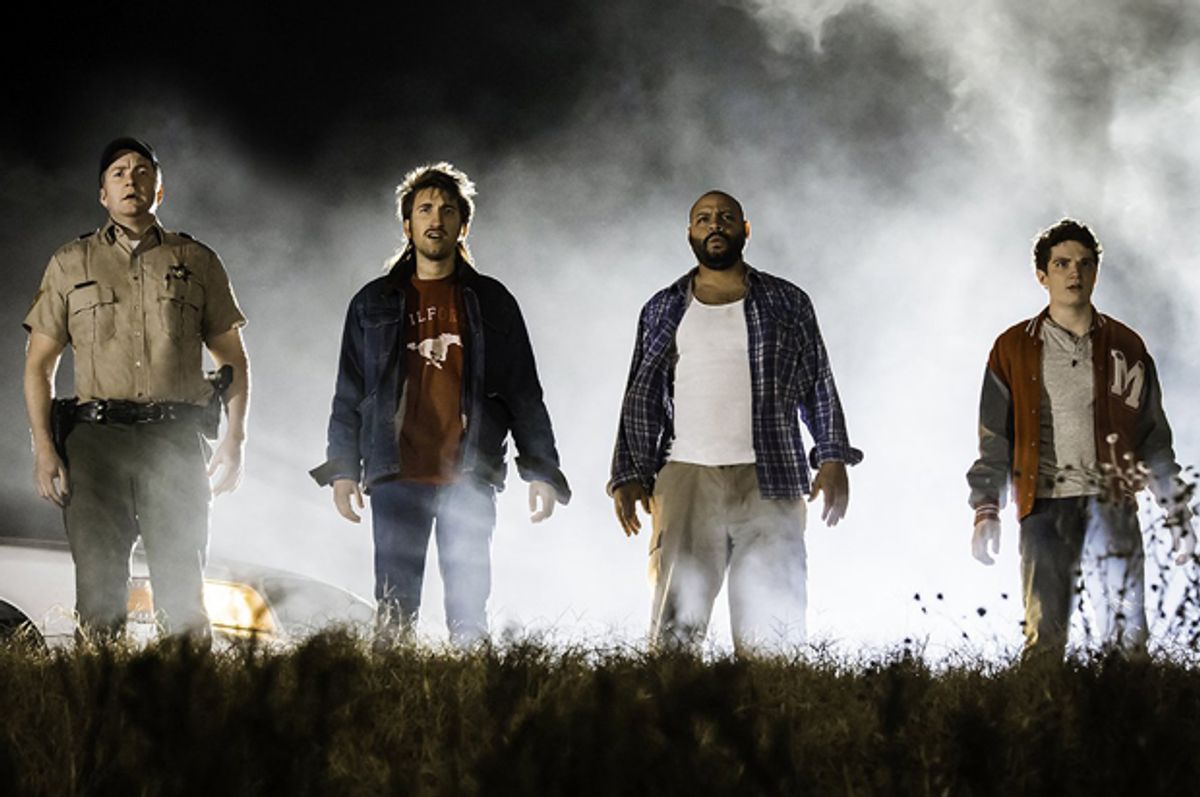 So for the first couple of minutes I thought “Lazer Team” was just so annoying and stupid I couldn’t stand it. Then I found my own safe space of annoying-ness and stupidity, right in the heart of this faux-‘80s alien-invasion movie made by — well, let’s get this out of the way; it was made by film-school comedy hipsters from Austin — and it was all OK from there. (At this stage of my life, my safe space only involved imaginary bong hits. But if you live in Colorado or Washington or any of the numerous other jurisdictions where marijuana prohibition is inconsistently enforced, I guess you’re entitled to make your own decisions.) If you need a break from the overarching idiocy of our political climate, the idiocy of “Lazer Team” is right on time.

All those characters are profoundly retrograde and offensive: four lovable but underachieving guys who are, at best, in the fourth IQ quintile (one of them being the token person of color), plus a misogynistic stereotype of young female sexuality? Well, yeah. As with all such things, it’s a question of whether you can make it work. For my money, director and co-writer Matt Hullum (a co-founder of the Austin production company Rooster Teeth, best known for the cult TV franchise “Red vs. Blue”) walks a fine and difficult line here with aplomb. “Lazer Team” is a pastiche based on a beloved pattern; it understands its own limitations but seeks to maximize its potential. All the characters are presented with immense affection and offered the chance to grow and develop, by which I mean to be gifted with inexplicable superpowers, to be repeatedly struck in the groin area by projectiles and to be mocked by others for their moments of vulnerability.

It will not aid in comprehension if I provide much of a synopsis for “Lazer Team,” which was written by Hullum along with Burnie Burns, another Rooster Teeth founder (he plays Hagan, the sad-sack Small-Town Cop), and editors Chris Demarais and Josh Flanagan. That’s a lot of writers for a script whose highlight moments include “That’s what you get for messin’ with Lazer Team, bitch!” Not to mention a plot that seems to have been borrowed intact from some straight-to-video Roger Corman film, or perhaps a Taiwanese-Italian co-production built around the star power of David Hasselhoff.

But OK, sure. These four losers in the middle of Texas who don’t much like each other accidentally come into possession of the Power Suit, which has been supplied to Earth by some supposedly friendly aliens to help us fight off an invasion from some other aliens, a lot less supposedly friendly. Alien Race No. 2 is sending their lizard-like champion down for a gladiatorial battle with the anointed Champion of Earth, an Aryan Superman type (Alan Ritchson) whom the U.S. military has bred in secret and raised from infancy. If this is starting to sound like that episode of “Star Trek: TOS” where Jim Kirk throws down with the rubbery reptilian killer known as the Gorn (“I will be swift and merciful!”), well, what’s your problem? Because that episode is awesome.

“Lazer Team” is a little bit that episode—which is called “Arena,” or so the Internet tells me—and a little bit “Hot Tub Time Machine” and “John Dies at the End” and “Cabin in the Woods,” and overall a lot funnier than most attempted spoofs made with more money. (I never got around to writing about “American Ultra,” because it was so depressing. If Kristen Stewart and Jesse Eisenberg could each surrender half their wealth—and granted, half of Jesse’s wealth is like 0.5 percent of K-Stew’s—to scrub that movie from our memories, I certainly hope they would.) This movie, built largely around the premise that any excuse to hear a grown man scream in terror like an 8-year-old girl is a good one, was largely crowd-funded via the Indiegogo platform. And for once I have to stuff all the sarcasm back in the can and say, wow, isn’t the Internet great? I so love it.

Extra kudos go to Colton Dunn, for making Herman, the onetime African-American football star turned town drunk, into a compelling and hilarious icon of self-destructive behavior, and to Gavin Free as the mullet-head maroon Woody, who gets the helmet of the Power Suit, which turns him into a genius with an English accent. (“Woody is a stupid person,” explains a lab-coated scientist. “That’s how stupid people think smart people sound.”) I’m not sure we needed the laborious male-bonding back-story about the football game Hagan and Herman lost 20 years earlier, and even in a movie made by reasonably cool people, the social media gags and celebrity cameos (Neil deGrasse Tyson! Seriously!) feel a little forced. But seriously, never mind. I think you already know by now whether you feel solidarity with the spirit of “Lazer Team,” or whether you are simply no fun at all.