TV might be more diverse than ever, but many women headlining acclaimed shows still make less money than men 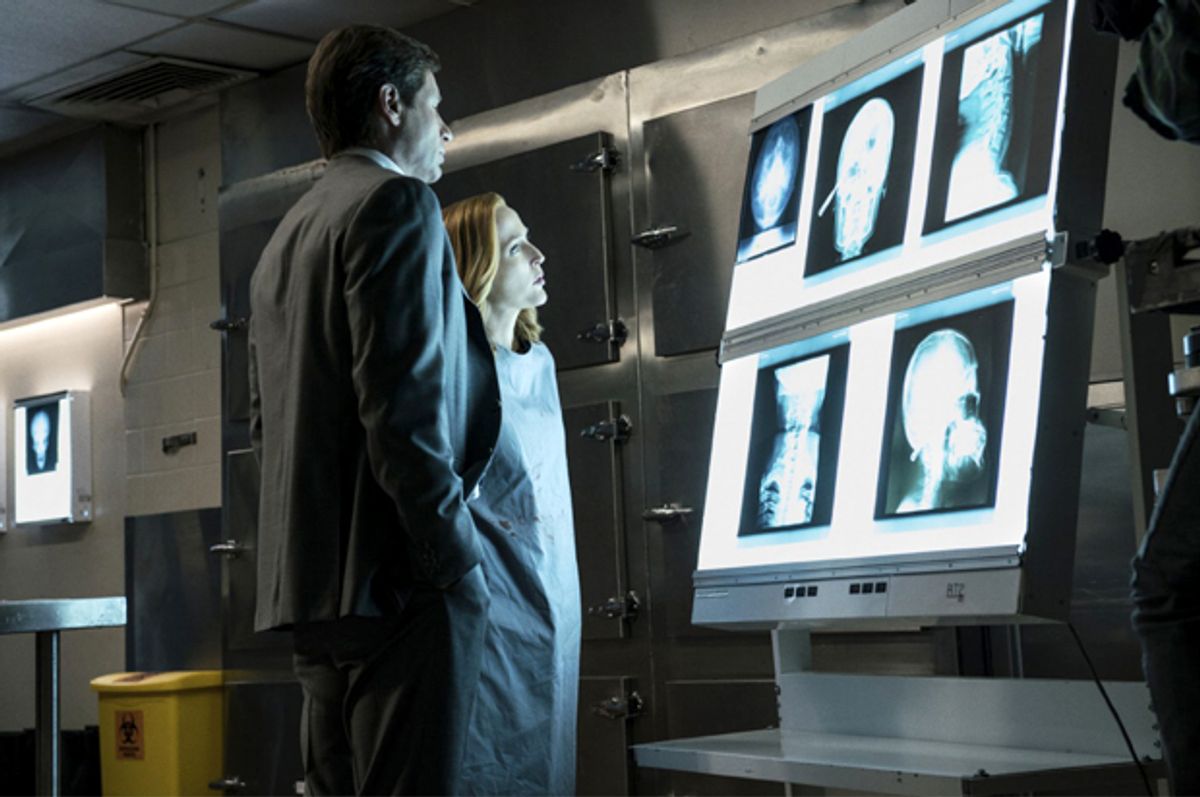 Gillian Anderson and David Duchovny in "The X-Files" (Fox)
--

It seems like a good time to be a woman on TV. While the film industry has been routinely criticized over the past year for its gender pay gap—in which male actors far outearn their female costars—and systemic racial bias, the small screen is flourishing precisely because of its surfeit of female leads and show-runners and actors of color. But if 2015 marked TV’s Golden Era of Diversity—with the successes of “Scandal,” “How to Get Away With Murder” and “Empire” showing the way—its glory days may not be as flaxen as we’d like to think.

In a recent article for the Daily Beast, Gillian Anderson discussed her long road to being paid equally for her work alongside David Duchovny on “The X-Files,” the 1990s cult phenomenon. “Anderson found herself fighting just to stand on (literal) equal ground with her male co-star,” the Daily Beast’s Melissa Leon writes. “The studio initially required Anderson to stand a few feet behind her male partner on camera, careful never to step side-by-side with him.” Her pay reflected that inequality—as she was paid just half of what Duchovny earned. It would take her three years to catch up to her costar’s salary.

Although Anderson claims “that was then, this is now,” sadly little has changed since the days when Scully was told to stand behind a man. Anderson alleged that when Fox executives proposed a reboot of the series, they tried to offer her less than Duchovny a second time.

Last year, Forbes reported that actresses working in film earn about 40 percent of what their male counterparts make, and it’s not much better on television. On the magazine’s 2015 list of the top-earning actors on television, only a handful of women crack the Top 10: “Modern Family” stars Sofia Vergara and Julie Bowen and Kaley Cuoco-Sweeting of “The Big Bang Theory.”

Vergara and Cuoco-Sweeting (who is soon to lose the hyphen) are two of the top earners on television, pulling in a massive $28.5 million in 2015. But these numbers don’t tell the whole story. Each of these enormously successful ladies is a one-woman industry—with their earnings boosted by a number of lucrative endorsement deals. Vergara is the face of campaigns for Diet Pepsi, CoverGirl, and Head and Shoulders, while Cuoco-Sweeting regularly appears in spots for Priceline and Toyota. But despite appearing in nearly every commercial on TV, they still lag behind Jim Parsons, who brought in $29 million.

The rest of the Forbes list wasn’t any more encouraging: 14 television actors make over $10 million each year, while just half the number of actresses (seven) cross that threshold. There isn’t a single woman of color in the $10 million club, and the only non-white actresses who rank among the TV industry’s top-earners are Mindy Kaling and Kerry Washington. (They barely make the top 10, and Kaling runs her own show in addition to starring in it.) In total, the 15 highest-banking men make an average of $16.2 million each year, while the women make just $11 million.

Thus, if federal averages indicate that women make 77 cents for every dollar a man earns, women on TV are pulling in even less. They take home just 68 cents for every buck their costars make.

According to “Orange Is the New Black” creator and executive producer Jenji Kohan, the story isn’t much better behind the scenes. In a 2014 interview with the Hollywood Reporter, Kohan expressed disappointment that Lionsgate—the production company that writes her checks—paid Matthew Weiner, the man behind “Mad Men,” $33 million a season for his work on the AMC show. In an interview with HuffPost Live, Weiner responded that her lower earnings isn’t a “gender issue.” Weiner said, “Jenji’s entitled to every dollar but you have to fight for it, male or female. No one gives you anything.”

As Time’s Megan Gibson pointed out at the time, this is an utterly ludicrous assertion. “Take a look at THR‘s list of the top 50 TV writer/producers of 2013: It features a total of 14 women on it, and many of them work as part of a team with a man,” she writes. “If you’re part of a vast minority working in a hugely competitive industry, it’s likely that you already had to work pretty damn hard to be there.”

If Weiner blames women for not doing more to negotiate their earnings, it’s because they have little wiggle room to do so; even those who have achieved as much as Kohan are often treated as expendable and replaceable. As British actress Joanna Lumley (TV’s “Absolutely Fabulous”) explained to the Guardian, there are still few positions for women at the top, which means that competition remains stiff. “They say, ‘Well, take it or leave it, the queue goes right around the block’ and you go, ‘Ooh, well, I’ll take it’ because most of us would rather work than not work,” Lumley said.

Thus, women in the industry have precious little job security. This is true whether you’re an actress, a writer, or running the whole damn show.

In a must-read essay for Slate, Aisha Harris writes that this is because women and minorities continue being treated as “diversity hires,” meaning that there’s often only room for one. “I was fighting every diversity person, of any ethnic diversity, for one spot,” Danielle Sanchez-Witzel, an executive producer on “New Girl,” told Harris. “The other 10 spots on the staffs I’ve been on, for the most part, have been for white male writers.”

Many of these candidates simply won’t get hired at all—as evidenced by the fact that shows like “Late Night With Stephen Colbert” have writing staffs that are overwhelmingly white and male. While shows like Shonda Rhimes’ “Grey’s Anatomy” should be credited for having diverse writing staffs made up of women and people of color (2011-2012 stats showed that 68 percent of the show’s writers were female), others are falling behind. During the same season, every single writer on “Veep” was a white man. For the IFC network, this was true of the entire channel—with programming penned solely by Caucasian dudes. Spike, Comedy Central, Cartoon Network and HBO were barely any better.

While television has made vast improvements in recent years, progress both behind and in front of the camera will continue to be slow. As Quartz’ Sonali Kohli indicates, the gender diversity of writers’ room has increased little since 2002 (up to just 30 percent in 2012), while female scribes, actors and executives continue to be undervalued and underrepresented. After all, this is an industry that routinely tells female directors that they aren’t necessary because, well, “we already hired a woman this season.”

TV might be more diverse than ever before, but as long as the small screen continues to treat equality as nothing more than a punch card, little will change.