When student writers tackle a sensitive topic without sensible guidance from adults on staff, this happens 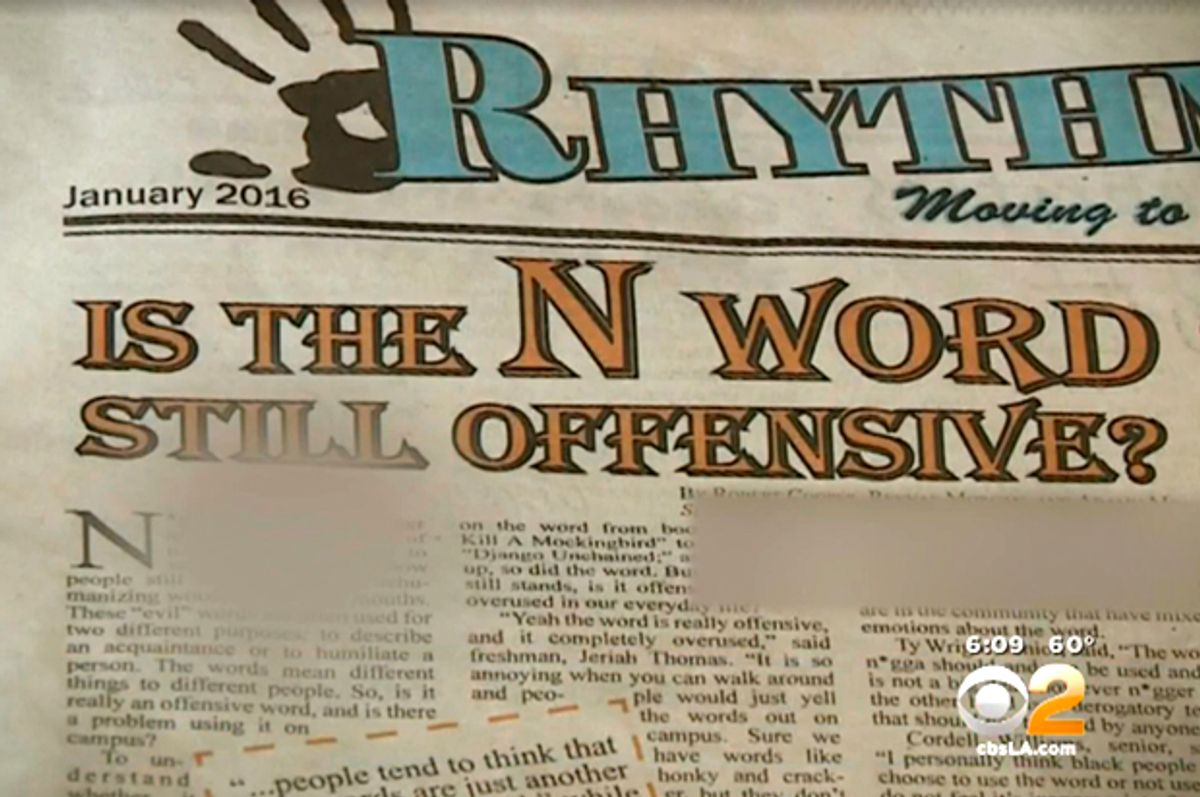 Yes, it's still early in the week, but let's see if we can't work together, America, to cool it with the high school students and racial slurs controversies. I believe in us!

Was it just Monday that a group of Arizona students found themselves the subject of international attention for their extremely ill-advised choice to pose, post senior photo session, in their lettered black t-shirts to spell out "NI**ER"? Why, yes it was. And while what's happened at California's Los Osos High School this week is definitely a less clearcut situation, it nevertheless is yet another shining example of how not to have a conversation about a sensitive issue.

As the local CBS News in Los Angeles reported Monday evening, some students and parents were surprised to see a headline in the school paper, next to one reporting on "A Night Underneath Eiffel for Grizzly Gals and Their Dads," asking, "Is the N Word Still Offensive?" Student Sheyenne Webber tells CBS, "First I read the title, and I was very confused." Her mother goes further, saying, "Even asking the question, 'Is the N-word offensive?' is an offensive newspaper title."

The CBS report notes that while the article, which "mentioned the N word and variations used in books, movies, rap songs and questioned if the words are overused and if there’s a problem using them on campus," had "edited most of the N words, replacing the I’s with asterisks, a few were left uncensored." As Webber's mother says, "I’m very offended that the adult coordinator of the newspaper didn’t edit the article at all."

On Twitter, the paper has defended itself, saying, "It's called Student Voice for a reason! We are for the students, because we are students!" And one of the school's teachers, Noel Arretche, also took to Twitter to say she's "Proud to call [Webber] my student" but also to urge, "All Osos students--read the article before forming an opinion. Be educated 1st."

That's excellent advice — we need to keep having conversations about race and language, and exploring the words we use, who gets to use them, and how. How are our kids going to know where they stand and what's the history and meaning behind those words unless they get to do that? That said, if you want teens to have that discussion, it needs to be guided by adults who can steer it in a way that isn't hurtful and offensive.

A story that notes that "African Americans are one of the minorities on campus" needs someone at the helm to decide if putting uncensored versions of the N word in a school editorial is a hot idea. (It isn't.) And if you want to get people to read the story, you should try to make sure the headline doesn't make them not want to.