Casting a white guy to play Michael Jackson, really?: In an industry rigged against minority actors, this is just the latest low

In the midst of industry attention to long-standing diversity issues, Joseph Fiennes signs on to play a Black icon 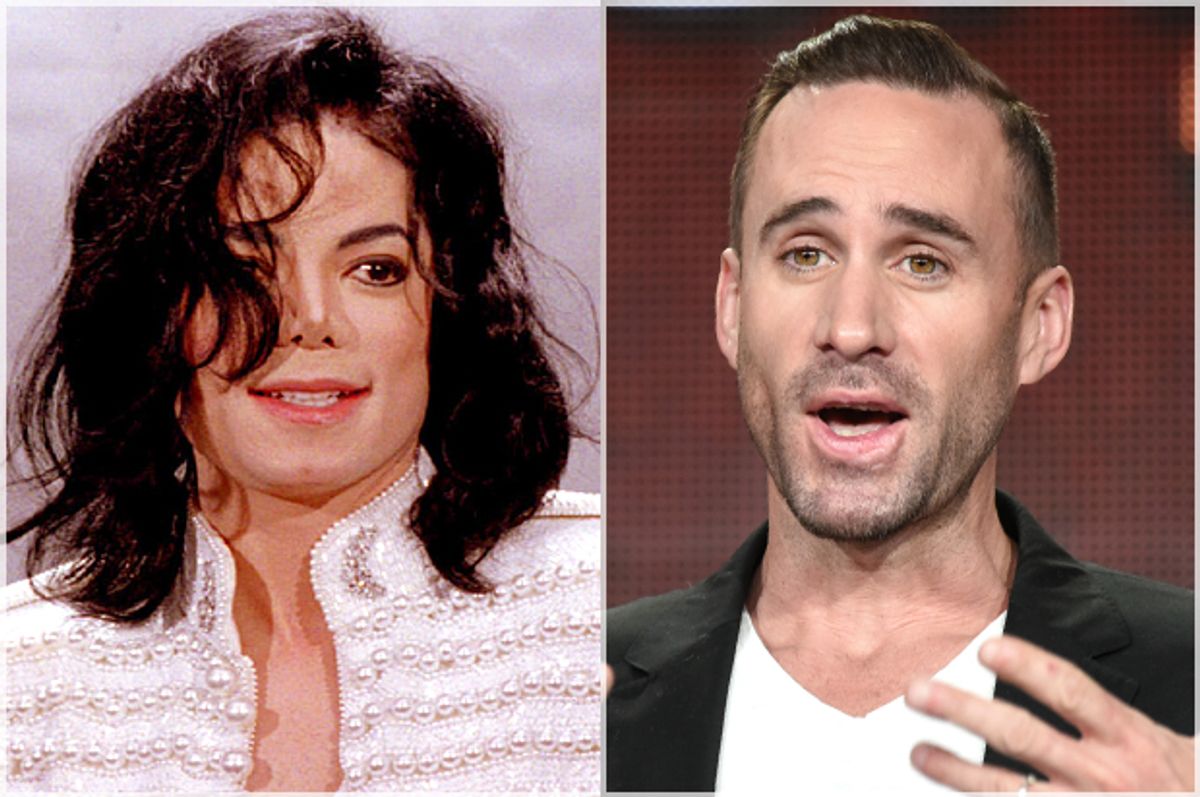 Well, this is awkward. Here we are, in the midst of a serious public conversation about how the entertainment industry treats people of color, and a long overdue backlash against the Academy Awards' habit of doling out its highest honors almost exclusively to white people. Here it was, Tuesday, when Variety unveiled a white upon white cover featuring the Oscar statuette and the words "Shame on us." And then, the same day, the announcement arrives that a white actor had been cast in the role of a famous African American entertainer. Oh dear.

I confess when I saw the announcement pop up on Tuesday evening that "British Actor Joseph Fiennes Cast as Michael Jackson in Road Trip Drama About 9/11" — and the subsequent mass bogglement on social media — I assumed the people expressing shock simply must have misread the news. Surely the announcement was about some other Michael Jackson — you know, like how there's the actress Michelle Williams and the Destiny's Child Michelle Williams, and the Beach Boys Brian Wilson and the ball player Brian Wilson. There has to be, I thought, some lesser known Michael Jackson cop or firefighter who had a significant role around the events of that tragic day. That's what I get for overestimating human beings again.

As the Guardian reported Tuesday, the drama "Elizabeth, Michael and Marlon," now in development with Sky Arts for British television, is based on an alleged road trip from New York to Ohio that Jackson took with Elizabeth Taylor and Marlon Brando as they tried to get home after the 2001 attacks. Anecdotally, just in case you're curious, the film is to be the first venture from a new production company created by actor Ralf Little, who is white, and written by journalist and author Neil Forsyth, who is also white.

The tale, first revealed in Vanity Fair five years ago, goes that Jackson, in town for two concerts at Madison Square Garden, had invited his buddies Taylor and Brando to his shows. Then a few days later the towers fell, and as one version of the story goes, "these three towering icons of American pop culture planned their escape, afraid that they would be the next target" and rented a car. A former Jackson employee told VF that "Brando allegedly annoyed his traveling companions by insisting on stopping at nearly every KFC and Burger King they passed along the highway."

One can certainly understand why such an anecdote — whether true or not — would capture the imagination as something ripe to dramatize. And the casting of Stockard Channing as Taylor and Brian Cox as Brando sounds about right. It's that third one we're all scratching our heads over.

Speaking with WENN, Fiennes confirmed the casting Tuesday saying, "I got the script the other day. It’s a challenge. It’s a comedy. It doesn’t poke mean fun but it’s a story, possibly urban legend… It’s a lovely thing about Michael’s relationship with Liz Taylor and Marlon Brando. It's a fun, light-hearted tongue in cheek road trip of what celebrity of that kind is like. But also it’s rather beautiful and poignant about their relationships as well." What Fiennes appears not to have mentioned is, hello, I shall be a white person portraying a black person. I really don't think this is meant by "colorblind casting," everybody.

So you want to make a comedy about three larger than life characters. An obvious punchline is that one of them spent the last several years of his career increasingly and dramatically changing his appearance — what could be wittier, the thinking apparently goes, than casting a white guy? At the time of his death in 2009, after all, Michael Jackson had an undeniably different — and considerably lighter — face than the one he came into the world with. (Jackson always firmly insisted that he didn't bleach his skin, and that his altered pigment was the result of vitiligo.)  The apparent deep-rooted body dysmorphia and self-hatred of a reputed sex abuser and drug addict who died of an anesthesia overdose? That's some gold right there.

But the choices about who gets to work and who gets represented do actually matter. And a lot of us don't know why this is so hard for certain segments of the casting and hiring population to grasp. Because it's not just about a stunt casting. It's about opportunity. It's about respect. It's about thinking through the choices, and taking a minute to ask, do we have so few white people working in entertainment right now that we need to cast them as black people? And then asking, isn't that a ridiculous question?