By not explaining and rebuking B.o.B's far-right, fascist views, the media is irresponsibly giving them a platform 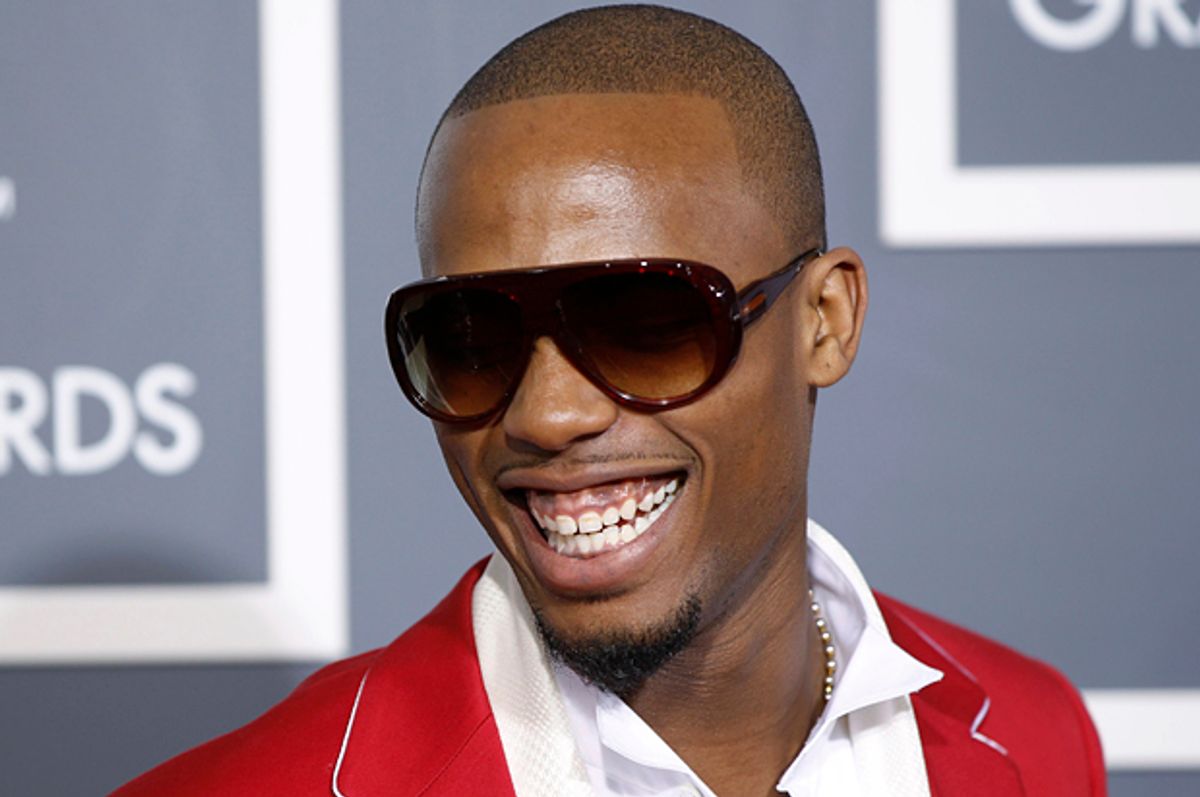 Chart-topping, conspiracy theory-touting American rapper B.o.B has been in the headlines this week, after getting into a Twitter argument — and subsequently a rap battle — with prominent physicist Neil deGrasse Tyson.

B.o.B believes the Earth is flat, you see. He wrote dozens of tweets to his more than 2 million Twitter followers on Sunday and Monday, arguing the world is being deceived in a giant, centuries-long conspiracy.

Neil deGrasse Tyson stepped in, criticizing B.o.B for "being five centuries regressed in reasoning" and "regressively basking in" pseudoscientific myths.

B.o.B responded, implying Tyson is a member of the Freemasons, referencing another conspiracy theory.

The rapper then released a song called "Flatline," in which he said "Neil Tyson need to loosen up his vest. They'll probably write that man one hell of a check."

The astrophysicist responded with his own rap, with the help of his nephew: "Flat to Fact."

"The ignorance you're spinning helps to keep people enslaved, I mean mentally," Stephen Tyson rapped. "I think it's very clear that Bobby didn't read enough," he added, referring to B.o.B. "And he's believing all this conspiracy theory stuff."

As comical as this episode was, the media was very lazy in its reporting. In their excited, tabloid-esque coverage of the celebrity spat, many news outlets unwittingly gave a platform for Holocaust denial and far-right conspiracy theories, without challenging them.

What was much less emphasized in B.o.B's diss track against Tyson were the dangerous, far-right views he espoused in it.

"Before you try to curve it, do your research on David Irving," he rapped in "Flatline."

"Stalin was way worse than Hitler," he added. "That's why the POTUS gotta wear a Kippa."

Irving is a pseudo-historian who has written books that argue the Holocaust is a myth and characterize Hitler as a victim of World War II. A British High Court judge ruled in 2000 that Irving "is anti-Semitic and racist and that he associates with right-wing extremists who promote neo-Nazism." In 2006, Irving, who called the Nazi gas chambers a "fairy tale," was imprisoned in Austria for writing propaganda that advocated Holocaust denial (Holocaust denial is a crime in some European countries).

Music magazine the Fader reached out to Irving. He told the website "[B.o.B] does not quite go along with what the media (and shortly, Hollywood) says about me, quite right." Irving's reference to "Hollywood" is likely a far-right code word for Jews, based on the anti-Semitic conspiracy that Jews control the media.

Irving said he "will now take a greater interest in American rap."

The Holocaust denier also insisted in his interview with the Fader that Stalin was significantly worse than Hitler. In the rapper's same insistence that "Stalin was way worse than Hitler," B.o.B and Irving demonstrate how right-wing, anti-communist red-baiting overlaps with Nazi apologism.

In a report on how the father of right-wing bankrollers the Koch Brothers and the patriarch of the Bush family worked with and profited from the Nazis, Salon noted that, despite their putative anti-government ideology, right-wing conspiracy theorists, far-right pundits and even some libertarians have ahistorically characterized the genocidal Nazis as victims because of their brutal defeat at the hands of the communists.

King's College, London historian Richard Vinen pointed out that, for much of World War II, "the eastern front was the scene of almost all the serious fighting." He adds that, between 1941 and 1943, Soviet "troops were the only ones to fight German forces on European soil."

Vinen estimates that the Red Army was responsible for approximately 75 percent of the Nazi soldiers killed, wounded or captured in World War II. Because it was actually the Soviet Union, and not the U.S. and U.K., that was responsible for the vast majority of the fighting against the Nazis, right-wing historical revisionists like B.o.B and David Irving portray the crushing of Nazism as a supposed crime of communism.

When B.o.B raps "the POTUS gotta wear a kippa," he is advancing the right-wing, anti-Semitic conspiracy theory that Jews secretly control the world's governments. A kippa is the small hat worn by some Jews, also known as a yarmulke.

Furthermore, when B.o.B raps in the refrain of the song "There's no superior blood line," he is referencing a right-wing conspiracy about the 13 bloodlines of the Illuminati, a supposed cabal of leaders that are trying to create the "New World Order." Many times, when the far-right talks about the "Illuminati," they are actually using the term as a thinly disguised reference to Jews.

These right-wing extremist, anti-Semitic references were immediately noticed by Jewish news outlets and organizations. The Anti-Defamation League released a statement on Wednesday — which also happened to be International Holocaust Remembrance Day — calling B.o.B's lyrics "unacceptable" and "deeply troubling" and asking him to apologize.

B.o.B removed "Flatline" from his SoundCloud account on Wednesday as well, amid backlash.

More subtle, but just as extreme, in B.o.B's lyrics in the song is when he raps "Globalists see me as a threat." Here, he is referencing a far-right conspiracy theory popular spread by pundits like Alex Jones, whose website InfoWars is popular among right-wing extremists.

"Globalist" is a far-right term used to refer to people and organizations who oppose hyper-nationalism and support migration and international, cross-cultural interchange. Right-wing conspiracy theorists like B.o.B and Jones claim "globalists" are trying to establish a tyrannical world government.

The "globalist" conspiracy theory derives from older anti-Semitic and anti-communist myths that claim Jews and communists control the world. Fascists often conflate Jews and communists together and describe Marxism was a Jewish conspiracy. This rhetoric has sometimes even been echoed by right-wing politicians in Western countries.

In his work, in fact, the Holocaust denier David Irving cites anti-Semitic anti-communist writings by Conservative British politician Winston Churchill — who would later become the U.K.'s prime minister during World War II — in order to try to justify his ahistorical, racist views.

As award-winning British historian Martin Gilbert documented, Churchill published an overtly anti-Semitic and anti-communist article titled "Zionism versus Bolshevism: A Struggle for the Soul of the Jewish People" in the Illustrated Sunday Herald in 1920. In the article, Churchill characterizes communism as a Jewish plot. The Conservative British leader calls the Bolsheviks the "bad Jews" and the Zionists, who wanted to establish the state of Israel in historic Palestine, the "good Jews."

"From the days of Spartacus-Weishaupt to those of Karl Marx, and down to Trotsky (Russia), Bela Kun (Hungary), Rosa Luxembourg (Germany), and Emma Goldman (United States), this world-wide conspiracy for the overthrow of civilisation and for the reconstitution of society on the basis of arrested development, of envious malevolence, and impossible equality," Churchill claimed, referencing revolutionary left-wing leaders who happened to be Jewish.

This anti-Semitic, anti-communist conspiracy continues to this day, but has mutated in various forms. B.o.B references many of the same fascist symbols, code words and ideas in his song "Flatline," but they have been largely ignored by the media.

By not explaining and rebuking these extreme, far-right views, and instead focusing on the pseudo-scientific, flat Earth kerfuffle B.o.B had with Tyson, many news outlets were irresponsibly giving them a platform.

The incident is strongly reminiscent of irresponsible media coverage of Donald Trump. Trump is beloved by neo-Nazis, fascists and white supremacists. The leading GOP presidential candidate frequently espouses far-right views that would normally not be given a mainstream platform.

Average people might not notice, but the fascists themselves sure have. This can be seen all over social media. Fascists regularly tweet positively of Trump. Trump has even manually retweeted several of them. Similarly, neo-Nazis have been tweeting and writing articles in support of B.o.B in response to his new song.

Yet the American media, desperate for more article clicks and shares, continues to fill headlines with the toxic, violent ideas and false claims people like Trump and B.o.B make, without adequately challenging them.