The Maine governor knows his French history, so he says, but has he forgotten the real lessons of the Terror? 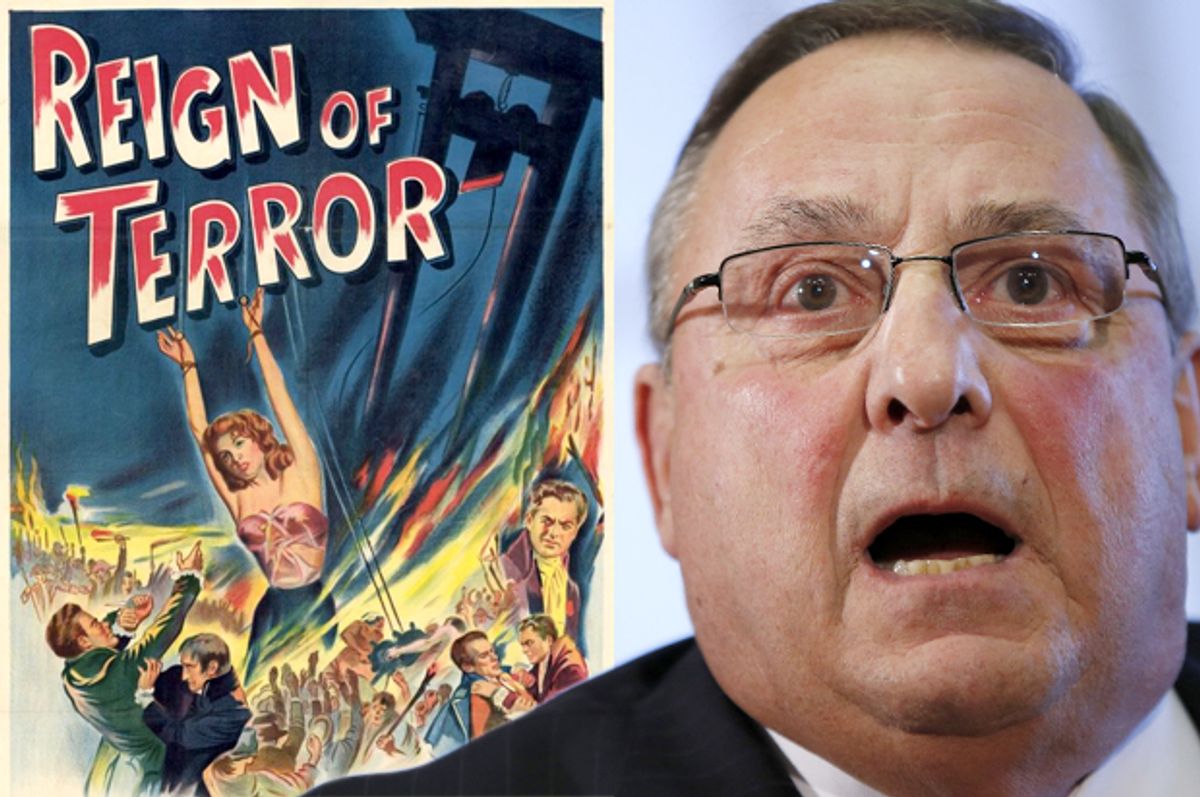 The Queen of Hearts from “Alice’s Adventures in Wonderland” had “only one way of settling all difficulties, great or small. ‘Off with his head!’ she said, without even looking round.” Now the bellicose governor of Maine, Paul LePage, is pulling a page from the Queen’s playbook and calling for the return of the guillotine.

“What I think we ought to do is bring the guillotine back,” he told WMOV. “We could have public executions and have, you know, we could even have (guessing) which hole it falls in.” Sounds a bit like the Queen of Heart’s other favorite hobby: playing croquet with live hedgehogs as balls. But LePage’s comments were made in jest, of course. A way to invoke his French ancestry. “I like French history,” LePage said.

LePage sneaks in French references often, sometimes so cleverly that hardly anyone notices. His remarks about the guillotine pick up on a thread started last year. He doesn’t want to (hypothetically) behead just anybody, but specifically out-of-state drug dealers. In previous comments that had landed him in the national spotlight, he’d named “guys with the name D-Money, Smoothie, Shifty. These type of guys. They come from Connecticut and New York, they come up here, they sell their heroin, then they go back home.”

“Smoothie” may refer to Dionhaywood “Smooth” Blackwell, 31, of New Haven, Connecticut, arrested in September 2015 for bringing heroin into the state and distributing it through a local drug ring. I don’t know who “Shifty” is, but when the governor speaks of “D-Money,” surely he’s invoking the “History of the World, Part 1,”--the film, that is? Mel Brooks created a character named Count de Monet--correctly pronounced Count de Mo-nay, but everyone calls him Count D-Money because money’s all he cares about. A variation of that joke gets repeated in “The Shawshank Redemption,” a film based on the work of Maine’s most famous writer, a man named King, who often finds himself quite upset with this Page. The inmates in that film Americanize the name of one of France’s most illustrious novelists, Alexandre Dumas, by pronouncing it “dumb-ass.”

The guillotine is a French invention too, made famous during the Revolution and used during a bloodthirsty period of ideological fervor known as the Terror. It is not medieval but Modern, the pre-eminent symbol of a newly-realized state power capable of imposing a swift, clinical, impassive, and above all else, standardized (hence “egalitarian”) death on the condemned. As a “machine for the production of rapid and discreet deaths,” Michel Foucault explained in his seminal work, “Discipline and Punish: The Birth of the Prison,” the guillotine “represented a new ethic of legal death” because it visibly killed without torture: no breaking of bones on the wheel, no drawing and quartering, no hanging, etc., all of which extracted a dying that could take all day or longer to complete. By contrast, the guillotine was instantaneous: the executioner’s version of drive-thu food. During the Terror, thousands and thousands were served.

Per Foucault, the guillotine of 1793-94 sits precisely on that juncture between “the disappearance of the tortured, dismembered, amputated body, symbolically branded on face or shoulder, exposed alive or dead to public view,” and the modern penal state, which focuses instead on removing wealth or rights as a way to punish offenders. This institutional work is abstract and passive, though the suffering is no less real for those rendered non-persons by the state. Today, it is understood that civilized people don’t execute but imprison, with an eye to rehabilitate those who’ve been rendered by the justice system.

Why would LePage want to bring back the public spectacle of execution? It may be a logical extension of this easily bored YouTube culture, as it contrasts the “civilized” hand of the state against the “savage” beheadings being performed by sword-wielding jihadists. The public execution was a highly ceremonial ritual charged with a political component because it reaffirmed the right of those in power to legally kill their enemies. It wasn’t the expression of individual rage but an instrument of control. By rendering transparent the impassive workings of the socio-political machine, execution directly removed the destabilizing principle—the criminal, the traitor—from the body politic, and restored order to the people.

Superficially, that doesn’t sound so terrible, and some might even think it’s great. But if LePage likes French history, he might want to read up on the last phase of the Terror. For those executed during the Terror were not criminals in the conventional sense. Their crimes were ideological. Initially, they were condemned as “enemies of the Revolution.” The king and queen of France lost their heads. The monarchy fell, followed by nobles of the same ilk as our hapless Count de Monet (aka “D-Money.”) But “enemy” was a fluid condition swallowed by paranoia, eventually coming to mean anyone who was insufficiently loyal to the cause of the Revolution. The condemned were now scientists, artists, beloved nuns…until finally, the people realized that no-one was safe from the guillotine’s blade, because the conditions of ideological purity could never be satisfied. And so the guillotine claimed the head of the leader of the Terror, Robespierre, who was condemned to death for having condemned so many others. His beheading brought the Terror—but not the Revolution--to its end.

“She never executes nobody, you know,” the Gryphon whispers conspiratorially in “Alice in Wonderland.” Yelling for heads, the Queen of Hearts sows fear among her people, who are unaware that the King secretly pardons her victims behind her back. By contrast, Maine’s King made sure that everyone knew what he was up to when he challenged LePage’s claim that he’d fled Maine to avoid paying state taxes. Stephen King tweeted that “much is owed from those to whom much has been given,” paraphrasing Luke 12:48, the Parable of the Faithful Servant. I'm guessing that King’s more than happy to pay his taxes because he's a horror writer with insights into the blackness of human souls. Chances are, he’s not only read up on his annotated Alice but also Vladimir Nabokov’s "Invitation to a Beheading" — a book that, in these weird times, seems like it could be written as tomorrow's headlines.