What John Kerry won't ever acknowledge: The U.S. relationship with Saudi Arabia is self-destructive — and even crazy

Secretary Kerry says U.S. friendship is as strong "as we ever had," but Saudi fuels, supports and exports extremism 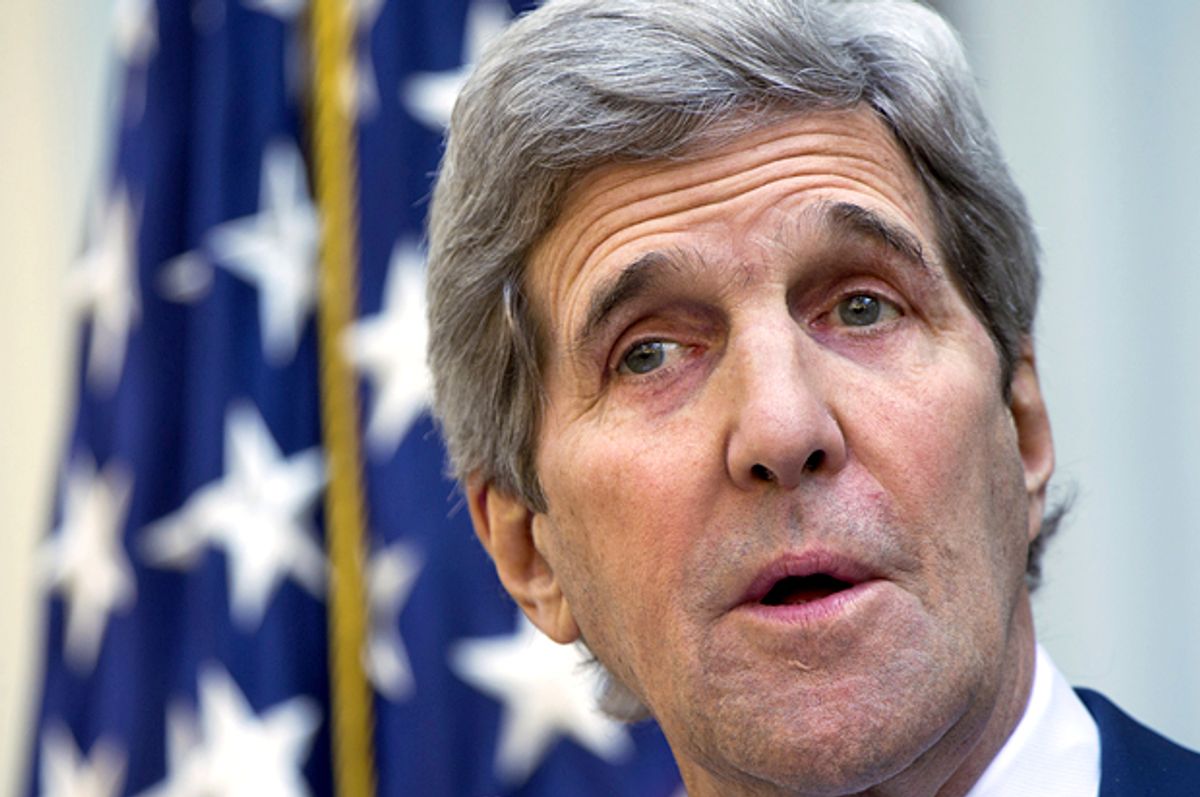 "Folks, we have as solid a relationship, as clear an alliance, and a strong friendship with the Kingdom of Saudi Arabia as we ever had," Secretary of State John Kerry insisted in the U.S. Embassy in Riyadh on Jan. 24, assuring any skeptical staff who might still harbor ill thoughts about the Iran nuclear deal.

Some Gulf regimes have worryingly speculated that, with the lifting of sanctions, the U.S. is warming its relations with Iran, potentially even moving toward rapprochement and turning their sworn enemy into a new ally. Kerry allayed any of such fears.

"Nothing has changed because we worked to eliminate a nuclear weapon with a country in the region," the secretary maintained.

Nothing has changed is right. The United States' close relationship with Saudi Arabia is as self-destructive as it has always been — self-destructive, and what some might even call crazy.

But the problem with calling it "crazy" is it implies the U.S. is unaware of the implications of its decision to cozy up to the world's leading supporter and exporter of Islamic extremism. On the contrary, America most certainly understands the consequences of its foreign alliances.

While the justification for the U.S.'s relationship with a theocratic, feudal authoritarian absolute monarchy that subjugates women and minorities and executes peaceful dissidents rests on particular discourses of stability and pragmatism, Washington is fully aware the actions of Saudi Arabia and other Gulf regimes actively defy its purported noble goals.

This relationship exposes more than any other the hollowness behind America's pledge to combat extremism and spread democracy.

It is precisely for this reason that the U.S.-Saudi relationship is so self-destructive — not to mention hypocritical.

Secretary of State John Kerry gave two speeches in Saudi Arabia over the weekend that illustrate exactly how destructive and dysfunctional this relationship is, and expose how many violent contradictions it creates.

"We're all in agreement," Kerry said of the Gulf states, in his remarks in the embassy on Jan. 24. "We're going to continue to do things that will help to bring stability and prosperity to this region."

"No one is looking for conflict; we are looking to resolve these conflicts," he claimed.

Yet the actual political actions of both the Gulf regimes and the U.S. flagrantly contradict this rhetoric.

"We agreed yesterday to work hard on Yemen," Kerry said. "We have new ideas about how we may be able to try to work to accelerate the effort to bring peace to Yemen."

There is actually a pretty simple way to bring peace to Yemen analysts might suggest to Kerry: Tell Saudi Arabia to stop bombing it. And stop arming the Saudi-led coalition that is brutally bombing Yemen. And stop coordinating with the Saudi military. Stop training Saudi bombers. Stop putting U.S. military officials in the rooms where the Saudi military is deciding which targets to bomb.

Yet, just two months before making these remarks, Kerry in fact applauded the authoritarian U.S.-allied monarchy in the UAE for invading and helping Saudi Arabia to bomb Yemen, insisting the actions were "helping "accomplish significant progress."

The U.N. estimates 6,000 Yemenis have been killed in the past 10 months, almost half civilians, and has identified the Saudi-led coalition as responsible for roughly two-thirds of civilian casualties.

Moreover, for over half a year, human rights organizations have warned that 80 percent of Yemenis — 21 million people — desperately need access to food, water, fuel and medical supplies, yet have been prevented from accessing them because of a Saudi blockade that the U.N. says has created a "humanitarian catastrophe."

On Syria, Kerry's rhetoric was even more unbelievable — and the hypocrisy of the U.S.-Saudi relationship became even more evident.

"Saudi Arabia is committed to work with us in the effort to try to stabilize Syria and calm down this hyped-up, exploited division between Sunni and Shia," Kerry insisted. "Nobody wants it."

If nobody wants it, why is the Saudi monarchy so actively encouraging and fostering it? Saudi Arabia is the world's leading sponsor and exporter of Sunni extremism. In Syria, it is supporting violently sectarian Sunni extremist groups like al-Qaeda affiliate al-Nusra and Ahrar al-Sham.

"Fifteen years ago, 10 years ago, nobody was spending their time defining people by, 'You're Shia,' or, 'You're Sunni.' That didn't happen," the secretary of state remarked. "And it's happening because there are some extremists who want to exploit it, and drive a wedge between people."

Kerry is right. There are some extremists who are exploiting is as a wedge — he is talking to them. The Saudi regime is, in fact, the progenitor of this religious sectarianism. It is hyper-sectarian, and the victims of its regular beheadings are disproportionately from the Shia minority community.

Yet the secretary of state maintained "We are determined to continue to work with the Kingdom of Saudi Arabia, with the Gulf States not to allow that to happen. That's why you're here. That’s why your work is so important."

"Aggressive actions in the region"

The day before, Kerry met with Saudi Foreign Minister Adel al-Jubeir, at the Royal Air Base in Riyadh.

"In Yemen, we face the Houthi insurgency and the ongoing threat that is posed by al-Qaida, threats to the territorial integrity of the Kingdom of Saudi Arabia," Kerry said, detailing the issues discussed in a meeting with the Gulf Cooperation Council.

"We have made it clear that we stand with our friends in Saudi Arabia," he added.

But Kerry's friends in Saudi Arabia are largely responsible for the threat posed by al-Qaida in Yemen. Just two weeks after the Saudi-led coalition began bombing Yemen in March, Secretary of Defense Ashton Carter warned in The New York Times that the chaos created by the Western-backed war was giving extremist groups like ISIS and al-Qaida an opportunity to grow.

Before the present war even broke out, experts had long warned that the U.S. drone war in Yemen was fueling extremism and strengthening al-Qaida.

In their discussion, the Saudi foreign minister described Iran as "the world's chief sponsor of terrorism," echoing points he made in a polemical, overtly anti-Iran op-ed published in The New York Times on Jan. 19.

The U.S. government's own secret documents, however, admit the opposite: It is in fact Saudi Arabia that is, to quote the State Department, "a critical financial support base for al-Qa'ida, the Taliban, LeT, and other terrorist groups."

A 2009 U.S. government cable released by WikiLeaks noted that "It has been an ongoing challenge to persuade Saudi officials to treat terrorist financing emanating from Saudi Arabia as a strategic priority," and revealed "Donors in Saudi Arabia constitute the most significant source of funding to Sunni terrorist groups worldwide."

The role of Iran in the war in Yemen is contested. Award-winning investigative journalist Gareth Porter has argued governments and the media have falsely blamed Iran for supporting the Houthi rebels, in order to justify the war.

Regardless of whether Iran is involved, Yemen is a sovereign country; what gives Saudi Arabia the right to decide its fate?

"We work with our American friends on trying to bring stability to Libya," al-Jubeir added. But it was the NATO war on Libya, led by Secretary of State Hillary Clinton and supported by the Saudi regime, that is responsible for that chaos in the first place.

"The work that we're doing is all designed to bring about peace, security and stability in the region," al-Jubeir insisted. "And much of that work involves pushing back Iran's aggressive actions in the region."

By doing so, Saudi Arabia is itself pursuing aggressive actions in the region — brutally bombing civilian areas in Yemen, supporting Sunni extremist groups in Syria, sending thousands of troops into Bahrain to crush a democratic uprising.

The world as a chessboard

These overt double standards and blatant contradictions expose the fault lines that lie under the U.S.-Saudi relationship.

Why does the contradiction-filled relationship continue? Why does Kerry reassure an extremist theocratic regime that the U.S.'s friendship is as strong "as we ever had."

It is about oil, of course. But not oil in the sense of buying oil.

The Gulf is the most oil-dense region of the planet, by far. Critics of this explanation correctly point out, however, that the U.S. only purchases approximately 20 percent of the oil it uses from Saudi Arabia. Part of this is because it is a good idea for a country to diversify the sources from which it buys, so it is not over-reliant on one source. Yet the answer goes even deeper.

In a recent interview, prominent scholar Vijay Prashad referred to Saudi Arabia as the U.S.'s "gas station." He explained that it is not just the Gulf's enormous oil reserves, but also Saudi Arabia's ability to control oil prices and its status as the leader of OPEC that makes it such an important ally.

This is in conjunction with the Saudi regime's role as a loyal customer for American weapons. In the past five years, the Saudi monarchy has bought more than $100 billion in arms from the U.S.

In short, the U.S.-Saudi relationship rests on oil and weapons sales and, ultimately, on the preservation of America empire.

It is indeed tempting to call the U.S.-Saudi relationship crazy. It sure is full of contradictions — ones that are often violent at times. But the U.S.-Saudi relationship is not predicated on regular logic that average people might employ for decision-making; rather, it is predicated on imperial logic, that sees the world as a chessboard, full of spaces for the taking, and everything in it as mere pieces.

This is precisely why it is self-destructive. The U.S.-Saudi relationship puts the interests of the 1 percent over those of the 99 percent — to put it in terms familiar today — sowing seeds of destruction, disaster and death throughout the Middle East in its wake. And those seeds bear fruit that have hit and will continue to hit Americans back home.