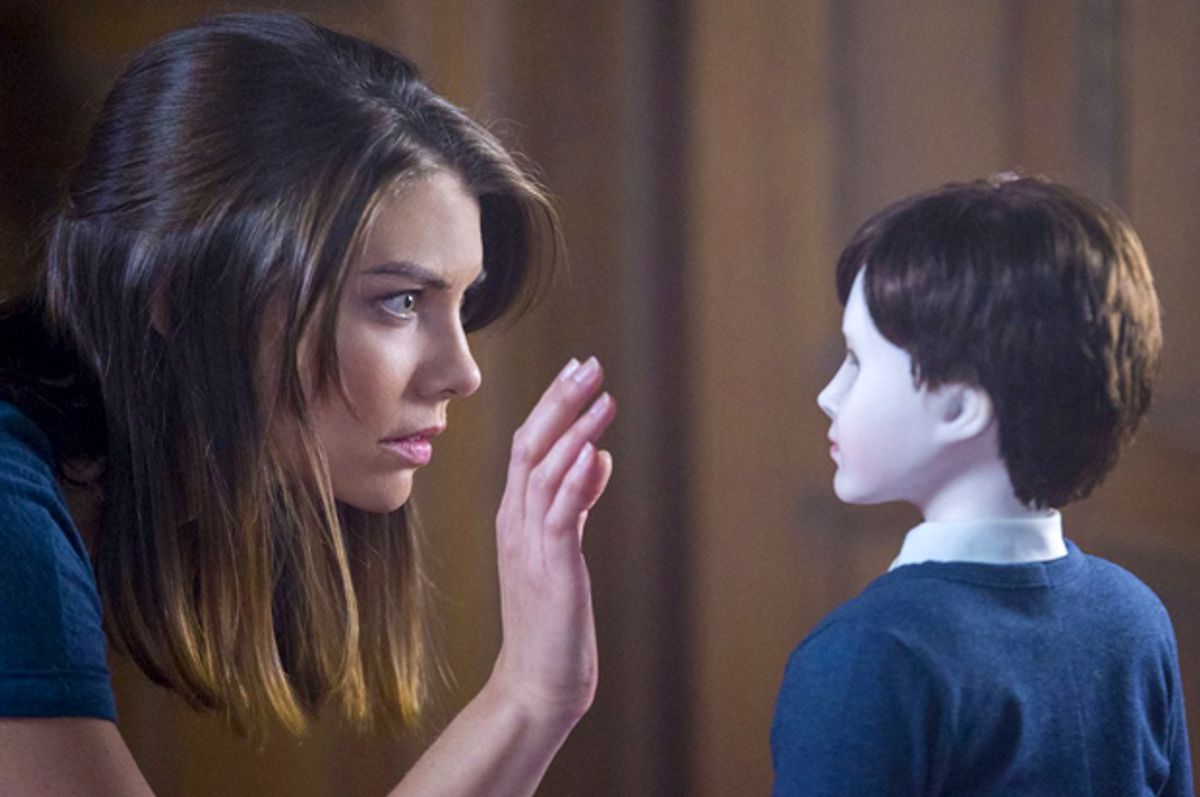 “The Boy” ostensibly sets out to combine the Creepy House and Creepy Doll subgenres for the series of delightful jump scares to be expected from anything star-free and scary. What you may not glean from the trailer, however, is that it is also the story of Creepy Men. Indeed, there is a reading of the film in which it’s an allegory for all of the nightmare boyfriends a woman might have. As “The Boy” unfolds, it twists all-too-typical heteronormative relationships into an actual horror movie.

Spoiler Alert! To get into this, we’re going to have to do some hefty plot summary. If you haven’t seen “The Boy,” and are deeply emotionally invested in whether or not that doll in the trailer is a real boy, please stop reading and save this for later.

The premise of “The Boy” centers around a woman named Greta, who escapes her monster of a boyfriend (Cole) by flying off to England to work as a nanny for the Heelshire family. When she arrives at their estate, she discovers that the child she will be watching is an impossibly spooky doll named Brahms and, oh, by the way, his “parents” are leaving on a trip, here’s a set of “rules,” goodbye. Greta is quickly left in isolation to contemplate a series of (seemingly!) supernatural events that lead her to question whether Brahms might actually be alive.

Greta’s clothes go missing, someone laughs playfully and leaves a peanut butter sandwich outside her door. Who could it be, if not Brahms? Greta begins to think she may be losing it. Outside of the occasional phone call to a friend on a landline, her only contact with reality is Malcolm, the grocery “man,” who delivers food once a week. She attempts to convince him that Brahms is more than just a doll, but he brushes her off, telling her she’s wrong about a spirit inhabiting the house. But also, by the way, if she’s not wrong, then she should leave immediately because it’s probably an evil boy that killed a girl 20 years ago and then died in a fire.

Greta ignores Malcolm — she had a miscarriage after one of Cole’s attacks, and feels an intense connection to the loss of a child. She begins reading to Brahms and kissing him goodnight, as the Heelshires’ rules stipulate. It seems as if Greta is truly enjoying her quality time with the doll / boy / spirit, when Cole, the ex, arrives and announces she is coming back home with him, whether she likes it or not.

It’s here that the plot mounts to a climax between the three male figures. Brahms writes “Get out” in rat blood over Cole’s sleeping body, Cole flies into a rage spiral, Greta tries to protect Brahms, Malcolm conveniently rushes in to rescue Greta and, finally, Cole smashes the doll on the floor. A glass eyeball rolls comically face-up as the walls begin to shake, the lights flicker and the paintings rattle. It seems like Brahms’ spirit is angry, but then he bursts out of a mirror and reveals himself: He didn’t die in that fire! He’s been living in the walls and working tirelessly to make the doll appear haunted for two decades, apparently!

As Malcolm, Cole and Brahms the grown-ass psychopath face off, the subtext of “The Boy” is cast in sharp relief. Each of the male characters represents a specifically disturbing type of abusive partner. Cole, of course, is the most obvious villain. He’s physically and emotionally abusive, intent to treat Greta like a possession that he can order about. Brahms is far more creative about keeping Greta in his grip. He engineers an extensive illusion of dependency in what is possibly the most elaborate case of gaslighting ever. And then there’s Malcolm. He’s cute and easily the lesser (least?) of the evils, but he also totally doubts Greta’s view of the world, and downplays her fears, insisting that she can simply pack up and leave the Heelshire estate whenever she wants.

Over the course of the film, the house reveals itself as a psychological prison on several levels. It was created by Cole, who compelled Greta to flee; maintained by Brahms, who created the “rules” to hold her in place; and dismissed by Malcolm, who discounts her perspective. Each of the male characters make up parts of one whole abusive boyfriend, terrifyingly personified into individuals. When they come together as an amalgamation, they represent the literal abuse, the manipulation required to maintain it and society’s frequent dismissal of its severity. The combination of Cole, Brahms and Malcolm are all necessary components in trapping Greta in the estate. It’s only when their destructive forces are turned against one another that she sees each for what it truly is and is finally able to escape.

It all ends with a physical fight — Cole killed with a porcelain doll cheek shard, Brahms stabbed with a wrench and Malcolm is nearly beaten to death, though Greta saves him. Cole is definitely dead. Brahms is maybe holding on for “The Boy 2: Adult Man,” but at least temporarily vanquished. And, while Malcolm survives, Greta flips the script by being the one to rescue him from the terrors she warned of all along. As the film draws to a close, the two drive off in a modern-looking SUV, which presents a stark contrast from the gothic aesthetics of the rest of the film. Greta is heading back into the safety of a reality that she controls, free from the hold of the Creepy House, the Creepy Doll and the Creepy Men it contained.

Lauren Duca is a writer, reporter and L.A. Press Club award-winner. Her work can be found in The Guardian and New York magazine, in addition to other places, including a weird scrap book her parents have been making since she was in kindergarten. Follow her on Twitter: @laurenduca.