David Daleiden's no journalist: His attack on Planned Parenthood was one thing — a failed takedown operation

David Daleiden is trying to defend himself legally by citing journalistic privilege, but he's not a journalist 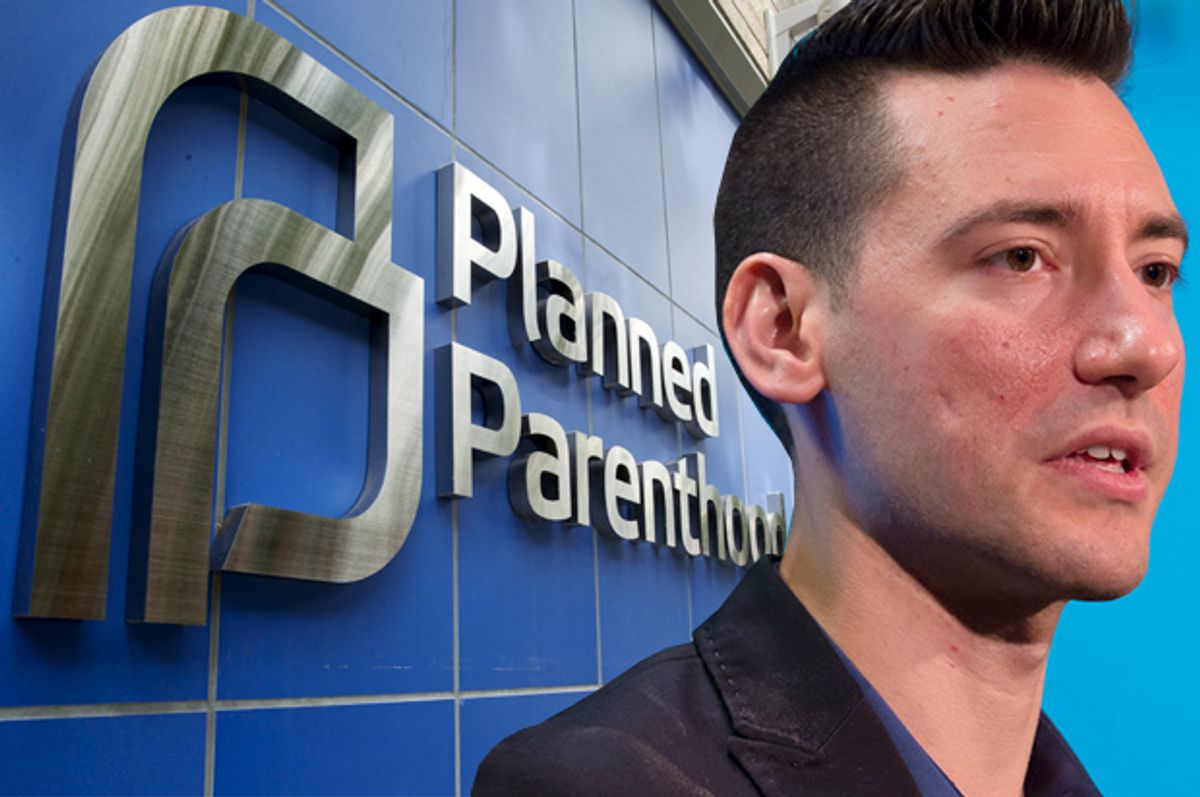 This week's announcement that David Daleiden and Sandra Merritt are being charged with falsifying government documents and attempting to buy human organs illegally is the latest round in a growing pile of legal headaches that have followed for these anti-choice activists in the wake of their creation of hoax videos falsely accusing Planned Parenthood of running a black market fetal tissue selling business.

The activists, who work for the misleadingly named Center for Medical Progress (CMP), are also being sued by Planned Parenthood and the National Abortion Federation (NAF). So far, that's not going well for them, as NAF is winning most early court battles over the issue of whether Daleiden has to turn his documents over for legal discovery.

In both the criminal and civil cases, however, it seems that Daleiden and CMP have landed on a legal defense: Arguing that his hoax videos are "journalism" and therefore should enjoy the enhanced legal protections that journalists get under the First Amendment. It's an argument that judges will hopefully throw out of court with haste, because Daleiden has no right to call himself a journalist.

"The Center for Medical Progress uses the same undercover techniques that investigative journalists have used for decades in exercising our First Amendment rights to freedom of speech and of the press," CMP's website declared, hinting at how they would argue journalistic privilege in the upcoming criminal battle in Texas.

This argument has been echoed in Daleiden's campaign to resist turning over evidence in the NAF lawsuit, where Daleiden argued that journalistic privilege should protect him from turning over sensitive documents showing how he managed to trick his way into private NAF meetings. This argument hasn't been doing well in court, but the anti-choice media, which has never been constrained by evidence or logic, continues to bleat that his "free speech" rights depend on letting him hide information about his methods.

To be clear, journalistic privilege — often known as "reporter's privilege" — is a very real and important aspect of free speech laws. As the Reporter's Committee for Freedom of the Press explains, there's a variety of laws and court cases that offer some amount of limited protection for reporters to refuse to reveal confidential sources and unpublished information. Being able to compel journalists to reveal sources too easily can put a chill on journalism, especially the sort that relies on whistleblowers.

However, there's a reason this is called a "privilege" or, at best, a qualified right. As the Reporter's Committee explains, the privilege has to be "balanced against other interests." In addition, the person invoking the privilege needs to make a convincing case that he or she is actually a journalist.

Daleiden is not a legitimate journalist, however, and he should not be allowed to pretend to be one in order to get special rights that other non-journalists don't have.

This isn't because Daleiden has a strong point of view. Plenty of legitimate journalists have strong opinions and use their journalism in order to get a wider hearing for those opinions. Investigative journalism in particular is often guided by a strong political viewpoint and a desire to unearth more information to support it.

No, the reason that Daleiden isn't a journalist is because of his relationship to the truth. Regardless of your political views, the truth should always be the trump card for a journalist. Daleiden, however, has never shown anything but utter contempt for the truth in his work. Whenever the truth and what he wishes were true collide, Daleiden has chosen to lie rather than tell the truth.

By his own account, Daleiden spent years investigating Planned Parenthood, trying to turn up evidence for this long-standing right wing rumor that they run a secret black market peddling fetal tissue for cash. But no matter how hard he worked — creating a fake business, falsifying his identification, and even trying to entrap workers by offering to buy said tissue —he couldn't turn up a scrap of evidence for his theory. On the contrary, the videos he took demonstrated the opposite, that Planned Parenthood is very careful to follow the law regarding tissue donation. His hidden cameras repeatedly captured employees clearly stating that they only work in tissue donations and that selling is against the non-profit's policies.

"This is a consistent theme throughout the 12 hours of video footage," Sarah Kliff of Vox, who sat through all 12 hours of (relatively) unedited footage that Daleiden captured in his quest, writes. "Planned Parenthood officials emphasize, repeatedly, that they do not see fetal tissue as a revenue stream, nor do they intend to make money off of fetal tissue procurement."

What do real journalists do when they start to dig into a story they thought was about corruption, only to find that, in reality, the people they're investigating are upstanding citizens who follow all legal and ethical guidelines?

"Usually you just kill the story," investigate journalist Lindsay Beyerstein told me when I asked her what she does in these situations. She went on to explain that most of the times, a journalist will discover early on in the process if there is no evidence of wrongdoing. "It's not newsworthy then," she said, and there's no reason to publish anything.

If you do screw up and publish "something is false or misleading," Beyerstein added, you would do a "follow-up story" explaining how you got it so wrong. Take, for instance, the Rolling Stone, which made the mistake of publishing what is likely a false story about a gang rape, and, rather than defend the untruth, published a lengthy mea culpa.

But what did Daleiden do when his lengthy investigation showed that Planned Parenthood follows the law regarding tissue donation? He allegedly falsified evidence, apparently with quite a bit of deliberation. Analysis shows that the short videos, which are all most people watched, were heavily edited to make it seem like the Planned Parenthood employees were saying things they didn't say. Even the supposedly unedited videos have a bunch of footage cut from them and that CMP provided transcripts that don't match to what is actually said on the videos.

Analysts even went so far as to suggest that the CMP staff made quotes up, as Irin Carmon of MSNBC explains:

The Fusion GPS report also takes issue with a quote anti-abortion activists and politicians have seized upon, where a medical staffer allegedly says off camera, “It’s a baby.” The transcription firm “found this dialog to be unintelligible.” The analysts, led by a former Wall Street Journal reporter, go further. “In our view, CMP created the purported statement, ‘it’s a baby,’ either through transcription error or intentional fabrication.”

No one should participate in behavior like this, of course, but this behavior should disqualify Daleiden from calling himself a journalist or comparing anything he does to journalism. No court should entertain this notion that a man who falsifies evidence should be able to hide behind journalistic privilege. To earn that privilege, you have to act like an actual journalist.