Giving Noam Chomsky the platform he deserves: Media only pays attention when he's uncontroversial, not when he talks about what really matters

Chomsky is only covered when he discusses partisan politics; his foreign policy criticism is ignored. He agrees 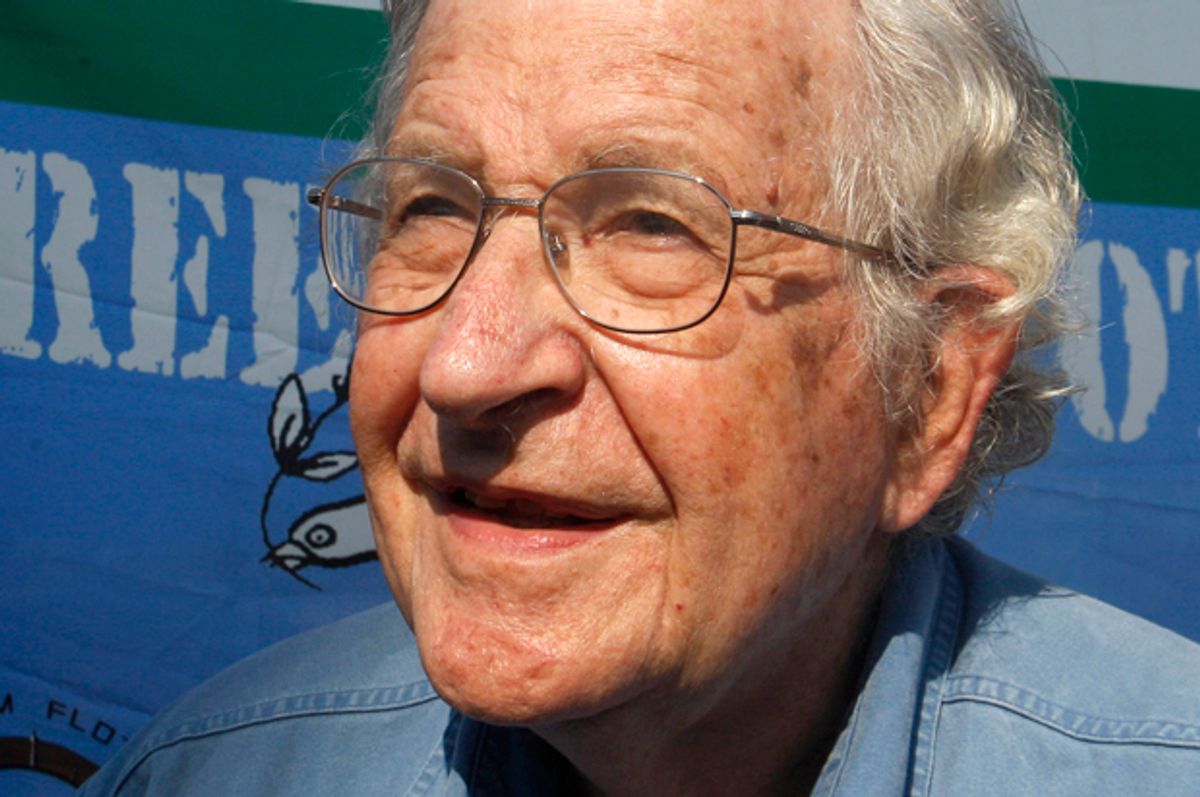 For decades, the renowned public intellectual and an author of more than 100 books has condemned the U.S. media for obediently echoing power.

In his 1988 opus "Manufacturing Consent: The Political Economy of the Mass Media," Chomsky — along with co-author Edward Herman, a seasoned media critic and formidable left-wing dissident intellectual in his own right — detailed how American news outlets frequently serve as a handmaiden of U.S. corporate, military and imperial interests.

Chomsky and Herman articulated in the book what they call a "propaganda model." They famously wrote "the media serve, and propagandize on behalf of, the powerful societal interests that control and finance them. The representatives of these interests have important agendas and principles that they want to advance, and they are well positioned to shape and constrain media policy."

They also cited structural factors that influence media coverage, namely ownership, funding, advertisements and personal relationships. "The same underlying power sources that own the media and fund them as advertisers, that serve as primary definers of the news, and that produce flak and proper-thinking experts, also, play a key role in fixing basic principles and the dominant ideologies," Chomsky and Herman argued.

Perhaps unsurprisingly, then, for many years, the media that Chomsky vociferously criticized largely refused to give him a platform. He was seen as an outspoken pariah, and was virtually never quoted in pieces or invited on air.

That is, until recently. In the past few years, the renowned left-wing dissident has become cited more and more in the U.S. media.

Optimists and technophiles have cited the increasing prominence of Chomsky in establishment media outlets as a sign of the alleged opening up of the U.S. media. They argue that, with the rise of more Web-based independent outlets, an opportunity has emerged for Chomsky to express views that, in the past would have been marginalized.

On Jan. 26 and 27, Chomsky was in fact trending on Facebook, in response to remarks he made about the Republican Party and Hillary Clinton. (A screenshot of Chomsky trending on Facebook on Jan. 27)[/caption]

Chomsky warned that the GOP has become "ideologically extreme, scornful of facts and compromise, and dismissive of the legitimacy of its political opposition."

"Today, the Republican Party has drifted off the rails," Chomsky remarked. And its extreme policies, particularly its denial of climate change, pose "a serious danger to decent human survival."

He also said that, although he is much more supportive of Bernie Sanders' left-wing policies, if he lived in a swing state, he would vote for Hillary Clinton over a Republican, despite her many right-wing policies.

His comments were featured in a variety of relatively large internet media outlets, including Politico, Huffington Post and more.

Salon reached out to Chomsky and inquired about the popularity of his remarks on the GOP. He characterized his statements as uncontroversial.

"Odd that they should pay attention to these comments," Chomsky said. "Do they really think it's surprising for someone to say that the leading Republican candidates are a serious danger?"

The optimists do have a small point: Chomsky is being featured in the media in ways that wouldn't have happened in the past. But this is not necessarily because media is suddenly opening up. There is good reason to remain skeptical.

Essentially the only time Chomsky gets mainstream platform in the media is when he is talking about partisan politics.

Every four years, Chomsky offers the same advice: He tells voters in swing states to vote Democrat, and says voters in blue states can comfortably vote third-party. And every time Chomsky offers this advice, he is featured in news outlets that rarely if ever feature him.

Chomsky's criticism of American foreign policy, crimes and war, on the other hand — the work for which he is most well-known throughout the world — is still largely ignored by major corporate news outlets.

When the renowned scholar and dissident refers to the Obama administration's drone program as an "extreme terrorist campaign," his remarks are not trending on Facebook. When Chomsky argues that, "If we use the term in accord with its official definitions, then, uncontroversially, Israel (like the US, Britain, Turkey and others) is a terrorist state by the standards we apply to official enemies," his point is glossed over.

That is to say, the changes in the media are largely exaggerated and superficial, because only its form has changed, not its hegemonic ideology. There is a new space that has opened in the media for voices like Chomsky's, but the actual ideological substance of what they say is filtered in a way that still reinforces power — just as it long has.

Chomsky himself agrees. Salon reached out to him and asked about his being featured in larger media outlets and trending on Facebook.

"I haven't noticed it," Chomsky said. "My impression is the opposite," he insisted.

"I've had about 50 op-eds distributed by the NYT [New York Times] syndicate, but not one has appeared in the U.S." Chomsky explained. "I'm rarely on TV or national radio, but when I am, it's Fox."

"Myself aside, I'm not aware of much of a general change in the media, except insofar as the country has changed, including the corporate world," Chomsky said, citing corporations' willingness to accept gay rights.

In fact, despite the rise of numerous Internet media outlets, in many ways, things have gotten worse.

In 1983 — around the time Chomsky was studying media coverage and formulating the propaganda model — 50 corporations controlled 90 percent of the U.S. media.

And the ideological conformity of the media vis-à-vis U.S. foreign policy in particular has remained strong.

Spaces have opened up for liberal discussions of social issues like LGBTQ rights, racism and equality, but the structures of power of capitalism and U.S. empire that Chomsky has challenged for decades remain largely unquestioned (it is in fact still seen as controversial to refer to the U.S. as an imperial power).

In the U.S. media, "you'll find quite a remarkable degree of civility and subordination to established power," Chomsky remarked in a speech in 1989, just after his book was released. He emphasized that this is "particularly remarkable because there is no force... this is willing subservience, not compelled subservience."

A controversial, dissenting viewpoint, "however well confirmed it is, it cannot be part of the discussion; it's got to remain outside of the spectrum of debate in respectable circles, maybe with some very marginal exceptions," Chomsky said. He cited scholarly studies of media narratives and stressed that there was almost complete uniformity in much of the discussion of U.S. foreign policy.

And, although Chomsky may now have a platform in some Internet print media outlets, on the television networks, where millions upon millions of Americans still get much of their news and political analysis, Chomsky is practically nowhere to be seen.

As one of the most important scholars alive, Chomsky has frequently been asked about his thoughts on his virtual blacklisting from the American media. He has long been regularly featured in international media outlets — yet, in his own country, he was often ignored. In a segment on the University of California program "Conversations in History" in the early 2000s, Chomsky explained that one of the ways media outlets justified this was with the requisite of "concision."

Chomsky joked that he could never be on ABC's "Nightline," because "the structure of the news production system is you can’t produce evidence." He recalled "Nightline's" Jeff Greenfield, who, when asked why Chomsky was never featured on the show, said it was because the scholar "lacks concision."

"Therefore you lack concision; therefore you can't talk," he continued. "That's a terrific technique of propaganda. To impose concision is a way of virtually guaranteeing that the party line gets repeated over and over again and that nothing else is heard."

These kinds of problems still exist.

Technological development in media and the rise of Internet news has not changed the internal structural impediments to dissent. Chomsky may now be given some opportunities to express some of his political views to larger audiences, but the views he is allowed to share are overwhelmingly the less subversive ones.

(This article was updated with remarks from Professor Chomsky.)