Kanye needs to leave Amber Rose and her child alone: She has nothing to be ashamed of, and she knows it

Rose is open about her past, when she worked as a stripper, but West still thinks it's a grave insult to lob 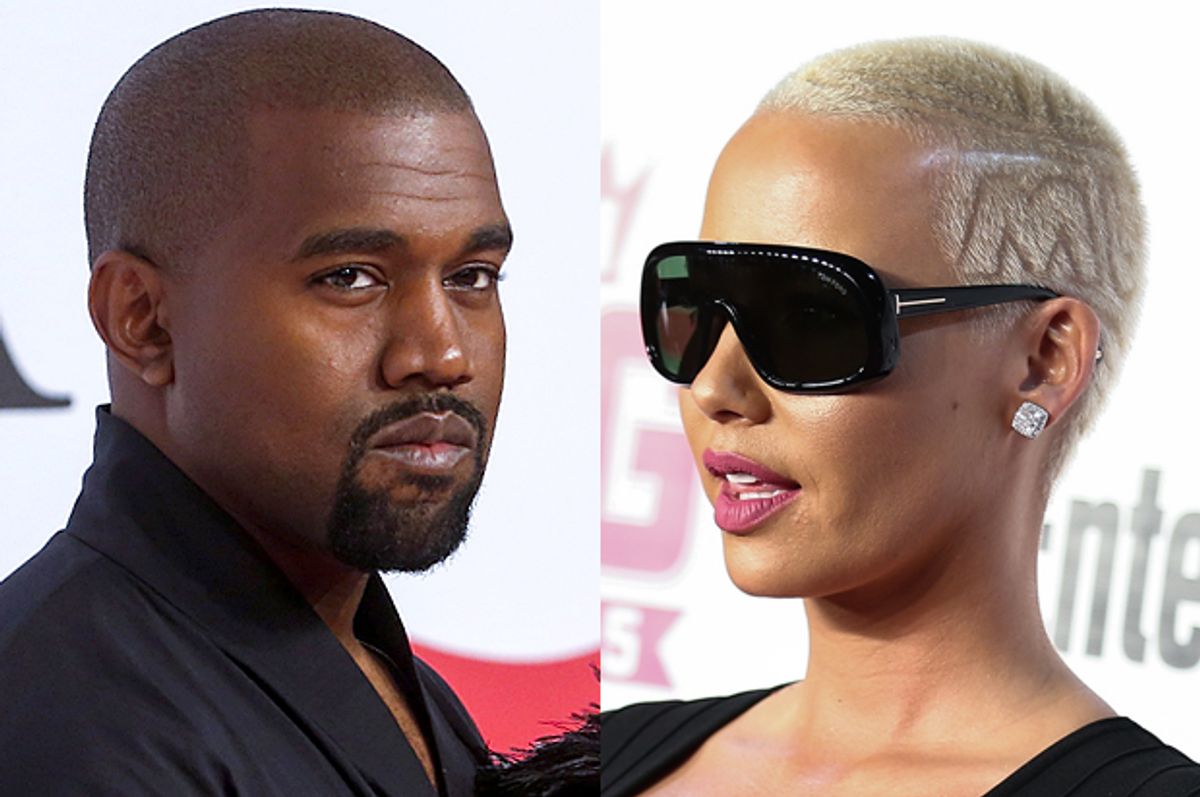 For a few minutes during his epic — and now deleted — tweet storm Wednesday, Kanye West was just plain hilarious, in his uniquely Kanye way.  Raging at his fellow artist Wiz Khalifa, who had committed the crime of publicly expressing a lack of enthusiasm for the new name of West's forthcoming album, "WAVES," he issued proclamations seemingly begging to be turned t-shirts. "You have distracted from my creative process," he railed. "Maybe I couldn't be skinny and tall but I'll settle for being the greatest artist of all time for consolation." But then, as a bonus, he went and proved himself a world class jackass when it comes to talking about women.

As West continued to go nuclear, he took a pause from commenting on Khalifa's music ("corny as f__k")  and pants ("cool"), to add other bullet points to his list of the man's apparent shortcomings. "4th you let a stripper trap you. 5th I know you mad every time you look at your child that this girl got you for 18 years," he wrote, and later, "12th You wouldn’t have a child if it wasn’t for me." The references, as even those who can't follow the incredibly tangled system of former and current relationships orbiting the Kardashian sisters will recognize, were to model, entrepreneur and provocateur extraordinaire Amber Rose. Before moving on to other relationships, Rose and West dated for two years. She now has a nearly three year-old son with estranged husband Khalifa. Oh, and she started stripping as a teenager.

In an interview with Cosmopolitan last year, Rose discussed how she started out as an exotic dancer at age 15 to make money. "I did it and I was like, 'Oh, hell no, I cannot do this,'" she said. "I was a kid. I think I was still a virgin at the time. Being onstage with my boobs out, it was like, 'Oh my god, this is not for me.'" But she soon grew to appreciate the job, continuing to dance until she was 25. "That was the best time of my life!" she said.  "Oh my god, I had so much fun. I really did. All the girls were really cool. The guys weren't allowed to touch you. I was never sexually assaulted or [anything]. I was young, beautiful, I was onstage, I wasn't really ashamed of my body. I made lifelong friends."  Let's just repeat that pertinent line: "I wasn't ashamed."

Unfortunately, for a woman to not be ashamed is an unacceptable condition in many parts, and Rose has certainly spent the last several years enduring the taunts of those who'd try to hoist embarrassment upon her. Last year, Kanye's sister-in-law Khloe Kardashian called out Rose over her comments about Kylie Jenner, saying, ''I was a stripper since I was 15 years old,' Amber Rose told Foxx. Please don't worry about my sister who has a career & her s__t together at only 17." The implication, clearly, is that one cannot be a stripper and have her s__t together.

Around the same time, West jumped in the fray, saying on "The Breakfast Club" that "It's very hard for a woman to want to be with someone who's been with Amber Rose. I had to take 30 showers before I got with Kim."

But Rose didn't care, firing back at critics taking issue with her for posting bikini pictures of herself on Instagram, now that she's the mother of a young son. Or as she put it, "Kiss my MILFY ass bitches," In August she showed up with Blac Chyna at VMAs in outfits defiantly festooned with sexist slurs aimed at women just like them.

Rose can, obviously, take care of herself just fine. And on Wednesday, she shot back at Kanye West with a mic dropping and incredibly NSFW response that, in the process, laughed at him for "getting bodied by a stripper."  But as long as West brought it all up, let's just unpack the thorough grossness of what he said before deleting it all and explaining, "All I want is peace and positive energy." We can even do this Kanye style.

First: He presumed that the word "stripper" is a pejorative, spitting out Rose's former occupation as if it somehow is an insult to call a former stripper a stripper. (It is not.) Second: He suggested that Rose somehow "trapped" Khalifa, because they have a child together. Third, and frankly this one's the worst: West went after the guy's toddler, narcissistically quoting his own "Gold Digger" in the process, suggesting that when he looks at his young son he feels not, say, parental pride, but the weary resignation of a man stuck with the boy's stripper mom. It's quite the trifecta of classic sexist BS. There's the trying to shame a man by pointing at his woman, because, right, this is really about the boys and the ladies are just there as symbols of their status in the world. There's the assumption that  a man would have to have been "trapped" to love and have a child with a former stripper, and of course, there's the continued straight up attempting to humiliate a woman for ever having a job that involved her body.

When I talked on Thursday  to my friend Lily Burana, who like Rose spent the better part of  a decade as a stripper and authored  the memoir "Strip City," we were both still agog. "From Kanye to Tina Fey to 'Family Guy,'" she told me, "knocking strippers is a perennial dis. It's misogyny; it's sex worker phobia; it's completely anti-feminist. That time is over. Take a seat." She added that being a stripper is "not an insult. It's a resume bullet point." And seriously, man, if you have issues with women who use their sexuality to advance their careers, you sure picked an interesting family to marry into.