Rand Paul's last stand: He can't win, so he might as well cause hell for everyone else at the Fox News debate

Thursday night's debate might be Rand Paul's last chance to have an impact, so he should go down swinging 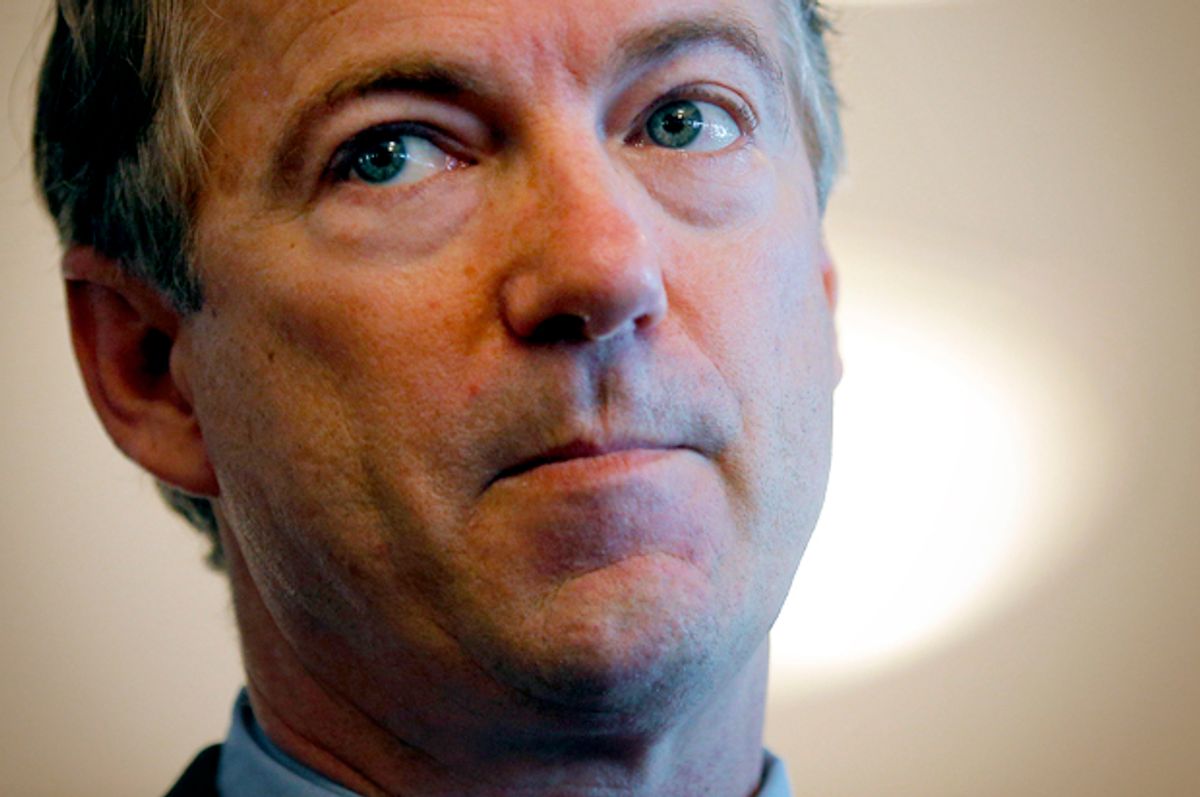 It's debate night in America, folks. In just a few unmercifully short hours, the Republican candidates for the presidency will get together for one last opportunity to scare the living b'jeezus out of Iowa residents before next week's caucus. In keeping with the larger theme of the 2016 race, the big story heading into the debate is Donald Trump: specifically, his decision not to participate as a protest against whatever Fox News did to insult his masculinity. But somewhat lost amid the incessant Trump coverage is the fact that the main debate stage will once again be graced by everyone's favorite hard-luck Keebler Elf of a candidate: Kentucky Sen. Rand Paul.

Rand got bumped from the last prime-time debate because his poll numbers were, in the technical jargon of elite political scientists, "bad." But rather than slumming it with Rick Santorum and the other hopeless dreamers in the JV debate, Rand went to the Twitter headquarters in New York to preside over some online town hall thing and tweet out a bunch of sassy hashtags. That actually wasn't the worst strategy in the world -- if you don't want to be viewed as a loser also-ran, don't show up at the event created specifically for loser also-rans. And even though his polls are still in the latrine (2 percent nationally, just ahead of last-place Santorum), Fox News’ rules were lax enough to just barely grant him entry thanks to a well-timed twitch in his Iowa numbers.

The question now, of course, is what Rand Paul does with this unexpected opportunity. The Republican electorate long ago made clear that they have little interest in or patience for Paul’s strange brew of conservative-libertarian politics. By having a foot in both the conservative and libertarian camps, he’s succeeded only in alienating both groups. And the Republican race’s focus on national security issues has left him at a huge disadvantage, given that the GOP base is yearning more for the neocon aggressiveness of, say, Marco Rubio than the measured non-interventionism Paul brings to the table. So what does a man with little to lose do with what is probably his last big chance to make an impact?

Go nuts, Rand. Let that libertarian freak flag fly. Unleash the hostile college-dorm debater inside of you. He can’t win, but he can sure as hell play spoiler for some of the candidates who have treated him brusquely in past debates. Trump won’t be there, which is just as well for Paul given how badly the front-runner has manhandled him in the past, but he can certainly take the fight to candidates like Chris Christie and Marco Rubio, who are both angling for the second-place spot in New Hampshire as a springboard to future campaign success. Some of Paul’s best debate moments in the past have come during scraps with Christie and Rubio as they’ve defended government surveillance and huge military expenditures. Before he sold out his principles to run for president, Paul was a hard-charging opponent of bloated defense budgets and cast them as antithetical to conservative principles. If he recommits to that idea, he could press candidates like Rubio on the contradiction between fearmongering about the national debt while also proposing huge tax cuts and massive increases to military spending.

That probably won’t win Rand any popularity contests, but he’s already losing the presidential popularity contest, so he may as well go down swinging. And, even if Paul doesn’t want to admit it, he does have better things to be doing than running for the White House. He’s up for reelection to the Senate this year, and while there’s no real danger of the Democrats pulling off an upset, Rand still has to tend to his political situation back home. As the New York Times reported last week, state Republicans are weary of what they rightly see as Paul’s hopeless presidential distraction. He already stepped on some toes and churned up some bad blood in his push to convince the Kentucky GOP to change its presidential primary to a caucus (which allows him to sneak past a state law prohibiting candidates from appearing twice on one ballot), and at this point it seems reasonable to wonder if Rand would even win the Kentucky caucus if he were to make it that deep into the nominating contest.

So if I’m Rand Paul, I use this debate opportunity to throw as many elbows as I can, put a few of the more popular candidates on the spot, and finish strong by annoying the ever-loving hell out of Chris Christie. He’ll have performed a valuable service and secured a small measure of redemption for a campaign that has never had much to celebrate.