What Paul Krugman gets wrong about Bernie Sanders

The NYT columnist has criticized Sanders for what he views as an overly idealistic politics. He misses the point 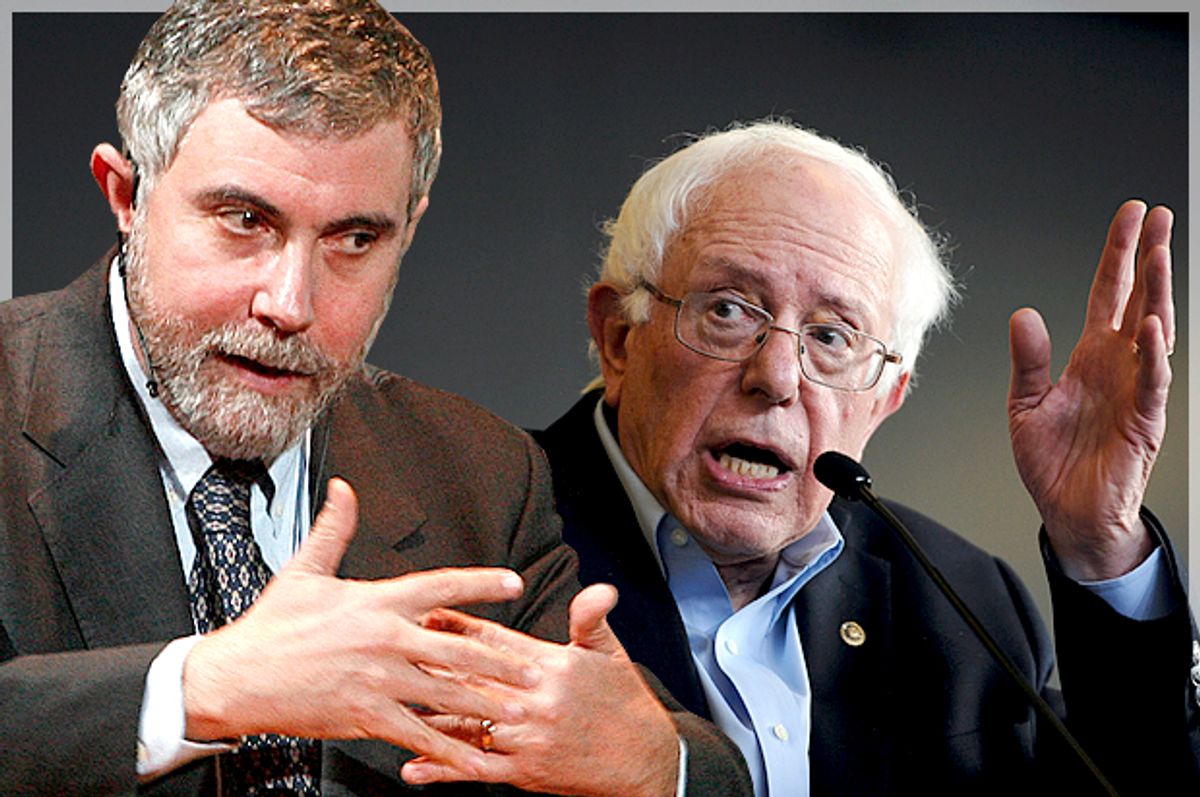 As everyone knows by now, Paul Krugman is not “feeling the Bern.” After the fourth Democratic debate -- which most pundits believed Sen. Bernie Sanders won -- the New York Times columnist went on a bit of an anti-Sanders spree, with a critical blog post on the candidate's “unrealistic” health care plan (released the night of the debate), a column on his faulty and idealistic view of change, and a rather bizarre blog post arguing that a Sanders nomination and an independent run from former New York Mayor Michael Bloomberg would ensure Donald Trump a “yuuuge victory.” This deluge of criticism, from one of America’s most well regarded progressives, resulted in backlash from some Sanders supporters and progressives in general. According to Krugman, he has been receiving some pretty nasty mail:

“Right now I’m getting the kind of correspondence I usually get from Rush Limbaugh listeners, although this time it’s from the left — I’m a crook, I’m a Hillary crony, etc., etc..”

This is an unfortunate, though not entirely surprising response. Such scathing criticism for the truly progressive candidate, from a revered progressive writer, came as a shock to many. But anyone familiar with Krugman’s past work should know that he has always been reproachful of anything he views as being overly idealistic. “In an ideal world, I’d be a single-payer guy,” he wrote in 2007. “But I see the chance of getting universal care, imperfect but fixable, just a couple of years from now. And I want to grab that chance.” Seven years ago, Krugman was also very critical of then-presidential candidate Barack Obama -- and especially of his supporters:

“Most of the venom I see is coming from supporters of Mr. Obama, who want their hero or nobody. I’m not the first to point out that the Obama campaign seems dangerously close to becoming a cult of personality.”

So then, Krugman’s criticisms of Sanders are in line with his past views (though other “wonk” critiques of Sanders, like Ezra Klein’s, appear to be more duplicitous). Krugman is no shill, but this does not mean he’s not wrong in his broad critique. “The question Sanders supporters should ask,” writes Krugman, “is When has their theory of change ever worked?”

But what exactly is Sanders’ theory of change? According to Krugman, it is the belief that a “sufficiently high-minded leader can conjure up the better angels of America’s nature and persuade the broad public to support a radical overhaul of our institutions.” But this is a straw man. While there are no doubt that some naive Sanders supporters who believe that, if elected president, Sanders could transform America from above with his noble ideals (one of the great things about Sanders is that you actually know what his ideals are), this is certainly not Sanders’ own theory of change, nor has he given this kind of impression over the past six months. After the Obama years, it is hard to believe anyone would still indulge in such fanciful thinking.

The Sanders campaign is not about conjuring up the better angels of America’s nature. It is about creating a nationwide movement demanding real change. Clinton is running to play within the current broken system -- the system she has thrived in. Sanders is running to overhaul it, which he regularly admits will not happen without a “political revolution” in the same vein as past protest movements. Former Secretary of Labor (under the Clinton administration), Robert Reich, summed it up succinctly on Facebook:

What Sanders supporters and Americans at large should really ask is, when has any truly significant political change come about without the people becoming politically active and demanding it? Did civil rights legislation make it through Congress because LBJ and other old white men thought it was the right thing to do, or because millions of people decided to stand up and resist? Did the political reforms of the Progressive Era happen because Theodore Roosevelt believed in the virtues of democracy, or because the agrarian populists, labor organizations, and radical movements threatened the status quo? Would the right to vote have finally been given to women if not for several decades of organizing and campaigning? As Noam Chomsky’s favorite anarcho-syndicalist, Rudolf Rocker, wrote many years ago:

“What is important is not that governments have decided to concede certain rights to the people, but the reason why they have had to do this.”

Sanders is certainly an idealist, in that he has a central vision of what a better America would look like. But he is an idealist who understands how real systemic change comes about. He is an idealist who has attracted massive crowds across the country, broken fundraising records once held by Obama, and mobilized millions of Americans -- especially young Americans. He is also an idealist who understands politics and the basic fact that if you start the negotiating process in the center of the road, so as not to be “contentious,” you are not going to accomplish very much. Paul Krugman seems to understand this; at least he did back in 2011, when he wrote:

Finally, it should be noted that the last truly idealistic individual to become president was Ronald Reagan. And guess what? Since the “Reagan revolution,” American politics has shifted steadily to the right.

Sanders has made our corrupt political system the cornerstone of his campaign, and his rhetoric is not hyperbole. According to a Princeton University study that examined decades worth of policies that became law in America and policies that Americans broadly supported -- based on decades of public polling data -- it was found that the “preferences of the average American appear to have only a minuscule, near-zero, statistically non-significant impact upon public policy.” On the other hand, economic elites “have far more independent impact upon policy change.”

Relying on a presidential election for fundamental change is hopelessly naive, and this is the point of the Sanders campaign (a point that has been lost on many). As someone who was active during the Civil Rights era, Sanders is quite serious about this whole political revolution. Whether Americans are actually ready for such boldness is doubtful, but the 2016 primaries have shown that the status quo is wearing thin.