Endless war will destroy us all: The U.S. military is the imperial hammer that sees every problem as a nail

A new war in Libya would be just as disastrous, and won't sate the military-industrial complex's ravenous appetite 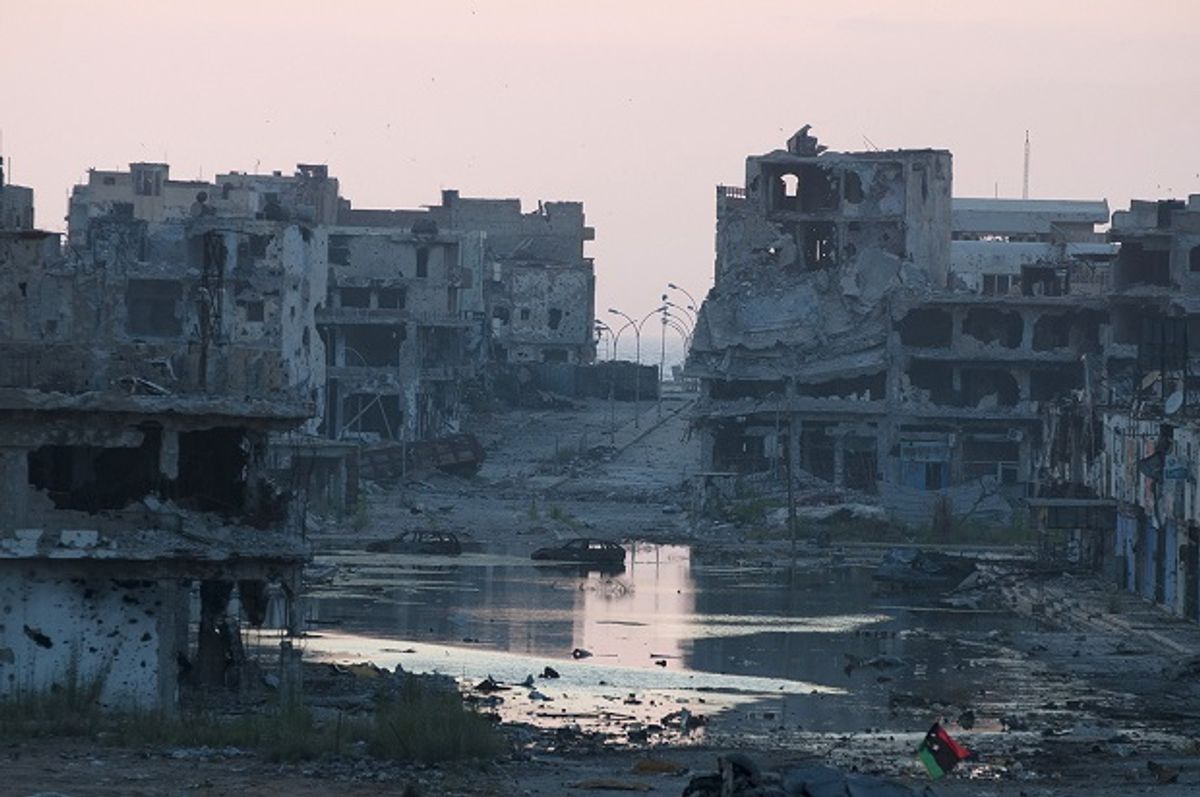 The ruins of Benghazi today, in the wake of the U.S.-backed NATO war, as Libyan pro-government forces fight the Shura Council of Libyan Revolutionaries and extremist group Ansar al-Sharia (Reuters)
--

History shows that the U.S. government earnestly believes military intervention and war can solve any problem.

This was perhaps most ludicrously illustrated when the New York Times reported that the U.S. military would "commit up to 3,000 troops to fight Ebola in Africa." (One could almost see it — thousands of bulletproof vest-clad soldiers, armed to the teeth, bravely shooting at the microscopic virus.) The Obama administration subsequently deployed 1,000 more.

"If all you have is a hammer, everything looks like a nail," stipulates the unbreakable Law of the Instrument. The military is the imperial hammer; any problem empire sees, it crushes with that hammer.

Even while it is presently waging wars (some of which have not officially been declared) in Syria, Iraq, Afghanistan, Yemen, Pakistan and Somalia, the U.S. military is itching to crush a few more nails in Libya, just over four years after it pummeled the North African nation.

"The Pentagon is ramping up intelligence-gathering in Libya as the Obama administration draws up plans to open a third front in the war against the Islamic State," the New York Times reported this week. "This significant escalation is being planned without a meaningful debate in Congress about the merits and risks of a military campaign that is expected to include airstrikes and raids by elite American troops."

"That is deeply troubling," the Times editorial board conceded. "A new military intervention in Libya would represent a significant progression of a war that could easily spread to other countries on the continent. It is being planned as the American military burrows more deeply into battlegrounds in Syria and Iraq, where American ground troops are being asked to play an increasingly hands-on role in the fight."

The chairman of the Joint Chiefs of Staff told the Times that military officials are "looking to take decisive military action" against the growing presence of ISIS in Libya.

But in order to defeat ISIS, we should be asking ourselves: Why is ISIS even there in the first place? The answer, of course, is the 2011 U.S.-backed NATO war on Libya, which was led by Hillary Clinton.

The Obama administration authorized the military to wage war on Libya on shaky legal grounds. Lawyer turned Pulitzer Prize-winning journalist Glenn Greenwald argued at the time that it was illegal. Former congresswoman Cynthia McKinney wrote an entire book detailing why.

The NATO war overthrew dictator Muammar Qadhafi and destroyed the government, leaving a power vacuum, large chunks of which were — surprise, surprise — filled by extremist groups including ISIS.

Numerous militant groups are fighting for control of the country. Some of the extremist rebel groups the U.S. previously supported have turned against it. The internationally recognized government in the east is fighting ISIS affiliates in the north, along with numerous Islamist rebels in the west and tribal militias in the southwest.

The project Libya Body Count, which creates very conservatives estimates of casualty figures based on media reports, documented more than 4,300 deaths in 2014 and 2015.

Clinton was grilled by Republicans for her response to the 2012 attack on the U.S. consulate in Benghazi, but what was largely ignored is the fact that downtown Benghazi is now in ruins; enormous swaths of the city are under the control of Ansar al-Sharia, an extremist Salafi Islamist militia that the U.S. deems a terrorist organization.

Before the U.S.'s first war in Libya, ISIS was not present in the country. That is to say, it was the disastrous U.S.-backed NATO war that brought ISIS into Libya. What would possibly make the military think another war is a good idea?

The same is true of Iraq. It was the U.S. war on Iraq — which the U.N. explicitly said was illegal — that led to the rise of ISIS. Al-Qaida was not even in ISIS before American troops invaded. Now not just al-Qaida, but its even more violent and demented sibling has metastasized throughout the region like a cancer.

There is a term for all of this: mission creep. There are countless examples — and one need not look far back historically.

The trajectory in the disastrous U.S. war in Afghanistan has been the same. President Obama promised countless times he would end the war in Afghanistan by 2014. He was reelected on the promise — which he subsequently broke, twice, expanding the war in 2014 and then, in 2015, announcing that U.S. troops would remain until 2017.

Some politicians, such as Sen. John McCain, want a permanent U.S. military presence in Afghanistan — which it must be noted has critical geo-strategical importance, will be part of the TAPI natural gas pipeline and contains trillions of dollars worth of natural resources.

In the meantime, more than 220,000 Afghans were killed in the first 12 years of the U.S. war, according to a report conducted by the Nobel Prize-winning International Physicians for the Prevention of Nuclear War.

And, according to the same report, in what is admitted to be a conservative estimate, more than 1 million people died in the U.S. war in Iraq. Today, the body count continues to grow.

Libya is simply the next in line.

The gift that keeps on giving

This process can and will only continue ad infinitum.

The reasons used to justify these wars constantly change, and yet war continues to remain unpopular — for good reason.

War, so we are told, is "good for the economy"; such is the cornerstone of "military Keynesianism," a dubious economic ideology if there ever were one — particularly considering Keynes himself wrote an open letter to President Roosevelt in 1933, imploring him "to engage in the interests of peace and prosperity," not for "the purposes of war and destruction."

Such a yearning for endless military intervention appears to be a pathology of the highest degree. And it is. But there are of course external factors, ulterior motivations for endless war.

It is impossible to satiate the bottomless appetite of the military-industrial complex. Arms manufacturers and other military corporate contractors are guaranteed to rake in many millions on a new war in Libya.

There could be a cat stuck in a tree, and one could imagine the U.S. calling in some troops — at the behest of weapons manufacturer lobbyists.

It must not go unnoticed that, although the Times editorial board now acknowledges a new U.S. war in Libya is a bad idea, it gleefully cheerleaded for the first one.

The newspaper of record published glowing Op-Eds that waxed poetic on the supposed boons of the war. Applauding "NATO's success in Libya," the U.S. permanent representative to NATO and Europe's supreme allied commander (surely there are no conflicts of interest here) wrote of how NATO helped transform Libya "from an international pariah into a nation with the potential to become a productive partner with the West."

What they really meant, of course, is that, if a country is not a Western ally, it is OK for the West to bomb it into submission, to violently overthrow its leader — whom extremist rebels it backs later sodomizes with a bayonet — and to destroy its government. Future candidates for heads of state can then gloat on large televised media programs, "We came, we saw, he died."

Qadhafi was no doubt a brutal and corrupt dictator (who collaborated with CIA torture, one might add). But in what sense was Libya any more of an "international pariah" than the U.S., which is very unpopular in the world? And not because they hate us because of our freedoms, as President George W. Bush infamously insisted, but rather because they hate our violent foreign policy.

Noam Chomsky has often quipped that the U.S. defines the "international community" as itself and its allies. In a 2002 article in Foreign Policy, the intellectual juggernaut noted that, "Accordingly, it is a logical impossibility for the United States to defy the international community."

The Times now appears to have actually learned its lesson. The U.S. clearly has not.

The burning question remains: How much longer will the U.S. continue to see the world as a nail?

The answer is simple: As long as it remains an imperial hammer.