Megyn Kelly is no better than Fox News: Her racist question about Muslims puts her on par with GOP candidates

Megyn Kelly has a reputation as Fox's "good" journalist, but her racist questions at the debate show otherwise 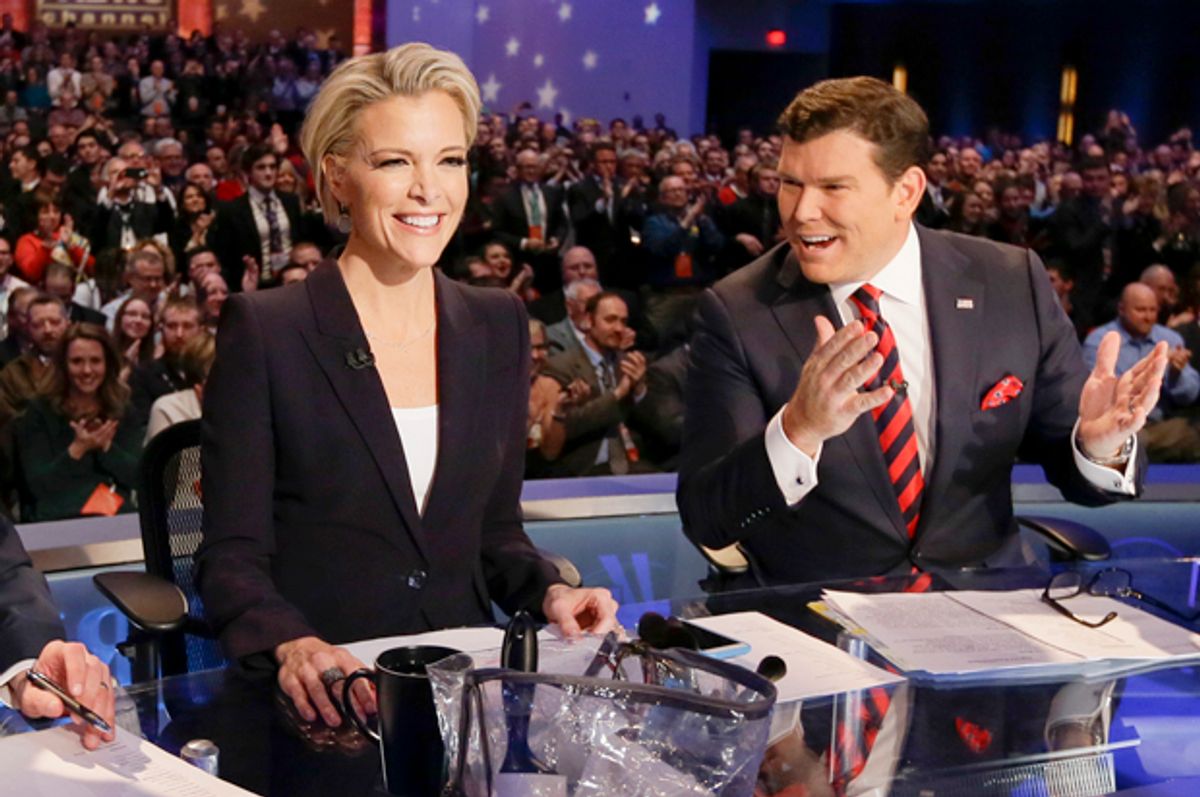 Thursday night's Republican debate on Fox News was a cornucopia of politicians saying vile and untrue things. Keeping up with what these fools who think they deserve a seat in the White House are saying is hard enough, so it's no surprise that one of the most wretched moments of the night, courtesy of moderator Megyn Kelly, got a bit lost in the media coverage of the debate. But it's worth taking another look, because the moment demonstrated why Kelly most certainly doesn't deserve the glowing reputation she has in much of the mainstream and liberal press.

The moment came when Kelly was trying to portray Chris Christie — Chris Christie, who spent most of the debate competing with Marco Rubio for who can be the hysterical over terrorism — as somehow soft on terrorism because he won't endorse racial profiling as a tactic.

"In December, two radical Muslims killed 14 people in San Bernardino, California," she began. "Neighbors of the terrorists said that they did not report the couple to law enforcement prior to the crime, because they were afraid that they would be accused of profiling."

Christie, in one of his few sensible moments of the night, pointed out that using "facts" and collecting intelligence instead of abusing everyone in a hijab is more effective as a law enforcement technique, but Kelly wasn't having it.

"The neighbors said they saw men going in and out of the garage," she countered. "They saw packages being delivered. They saw Muslims, and they did not think that was enough to call the cops. Do you?"

It was a jaw-dropping moment of pure, unadulterated racism. Kelly's argument was that behaviors that would never raise an eyebrow if performed by white Christians — receiving packages, having friends over to your house — become suspicious and reason enough to call 911 if being performed by people you suspect are Muslims.

It's tough not to wonder if Kelly actually buys her own nonsense. She does, after all, live in New York City, where people of every race and ethnicity you can imagine fill the streets. Does she flip out and call the cops every time she thinks she sees a Muslim? "Yes, officer, I see two people that look like Muslims drinking coffee at Starbucks. Yes, I get that there's nothing suspicious about drinking coffee, but you know, those San Bernardino shooters seemed normal, too, and look what happened there!"

And no, despite Kelly's implication, the fact that these two were up to something doesn't justify treating every Muslim who gets a package in the mail or has a friend over for tea like they are plotting a terrorist attack. That was Christie's point about focusing on facts over inchoate suspicions based on racial stereotypes. Out of every million package deliveries or visits from friends, there might be one incident that's more nefarious than it seems. Forcing law enforcement to harass every single Muslim who does either every single time isn't just a violation of basic human rights, but it's a massive waste of law enforcement resources.

The moment really highlighted, however, the sheer illogic at the heart of conservative hysteria over the threat of Muslim terrorism. After all, we live in a country where it's downright routine for angry people to take their resentments out on the world by going into a crowded area and shooting the place up. In the annals of mass shooters, however, the San Bernardino shooters stand out because of how atypical they are. Almost all mass shooters are men and nearly all of them are single. But if you suggested profiling single white men the way that Kelly suggested profiling Muslims, Kelly herself would be the first to have an aneurysm and start throwing out accusations of bigotry.

This wasn't just Kelly toying with Christie, either. She kept pushing this profiling agenda with Ben Carson, who, unlike Christie, isn't burdened by professional experience and therefore is free to push the ridiculous notion that harassing random Muslims is effective law enforcement. After Kelly asked if he thinks "GOP messaging on Muslims has stoked the flames of bias," he dismissed that idea out of hand, saying we "need to stop allowing political correctness to dictate our policies, because it's going to kill us if we don't."

Kelly did not dog Carson about this answer the way she dogged Christie for his anti-profiling answer.

This all matters, and not just because you have a major network peddling odiously racist ideas that would even make a 19th century colonialist say they're going too far. Kelly has a reputation in the media for being a hard-nosed journalist, and gets glowing accolades after debates like this for supposedly being so good at her job.

But, as this exchange shows, Kelly's not actually a good journalist. She's quick on her feet and doesn't back down from a line of questioning, and people mistake that for good journalism. But, at the end of the day, her ability to do her job correctly is hobbled by her crippling lack of basic critical thinking skills. This isn't even really about her politics, but about her failure to root her questions in basic logic and facts.

Asking if law enforcement should waste its time investigating every time one of the almost 2 million Muslim adults in this country gets a package or visits with a friend isn't just astoundingly racist, it's stupid. It shows she hasn't given this question a moment's thought. It's made worse by the fact that she wants to target people based on an atypical case instead of looking at more likely scenarios.

Not that any of this should be a surprise. Kelly has a long and ugly history of saying racist things that manage to be even more stupid than they are offensive. (My personal favorite was when she went off insisting that Santa Claus "just is white," even though Santa Claus is not actually a real person, but a made-up character who can have any traits you want him to have.) People really need to stop mistaking Kelly's ability to act tough on TV for actual skills as a journalist.