The evolution of Leo: His punishing, paternal "Revenant" is the penance that will erase his party-boy past 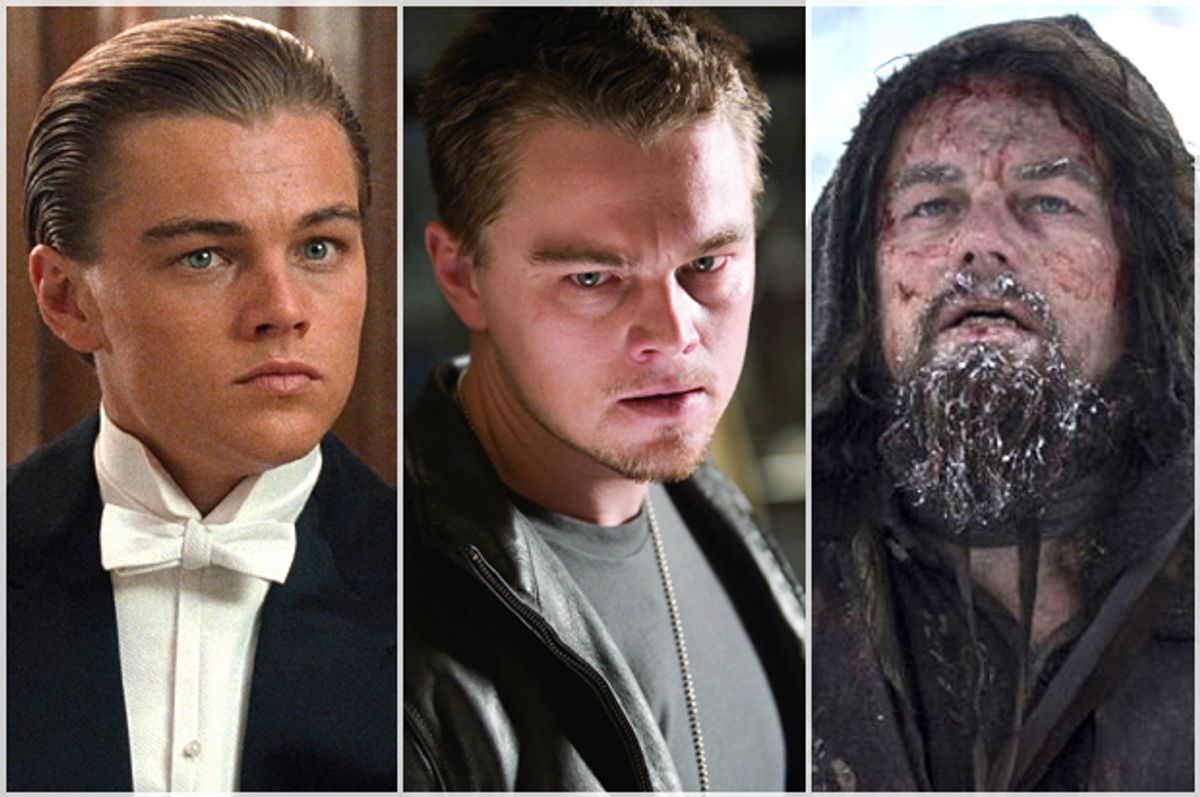 Leonardo DiCaprio in "Titanic," "The Departed," "The Revenant"
--

“They bring kids in and portray ’em as the next cute guy,” reflected a feckless Leonardo DiCaprio in an interview following 1993’s “What’s Eating Gilbert Grape?”

“But then what happens to that guy when the next face comes in? What happens to his career?" he asked. "It's more important to be a long-lasting actor than any kind of idol.”

Out of the mouths of babes—in this case the unparalleled babe of the late 1990s, the one unironically dubbed “Prince of the City” by columnist Nancy Jo Sales in her seminal 1998 feature for New York Magazine. The one who, in a 2000 cover story for Time, Joel Stein called “so self-aware, it’s paralyzing.” The one whose putative “Pussy Posse” arguably inspired an HBO comedy franchise. The one whose fame outweighed his acting the way his button-down dress shirts swallowed his frame.

Of course, Sales’s story wasn’t really about Leo—whom she never actually met during the course of her profile—but rather the cult of Leo, the rampant Leomania that engulfed Manhattan and put off so many parents, teachers and aging politicians. What followed was a time in which many, quite reasonably, did not wish to see the actor as ship-helming king any more. Perhaps it was 9/11 and the newfound solemnity (and sobriety) of the early aughts. Perhaps it was a growing awareness of date-rape culture and a sharper distaste for white-guy misogyny, no matter how cute (or rich or famous) that white guy happened to be (take the infamously unreleased “Don’s Plum” as but one piece of proof). Or perhaps it was simply that Leo’s lifestyle began to resemble a bygone era of go-for-broke bachelorhood—one in which panty-chasing and motorcycling themselves display vocational rigor.

Accusations of effeminacy trailed him all the same. And his surefire way to ditch the “androgynous wimp” rep? Star in movies directed by the world’s unwimpiest director: Martin Scorsese. There’s “Gangs of New York,” where Leo robs corpses, starts petty fights and does a lot of killing; “The Aviator,” where he bones movie stars and grapples with OCD; “The Departed,” where he (again) racks up a creative list of assault charges throughout his temp work for the mob; or “Shutter Island,” where (spoiler alert) he turns out to be a patient at a mental hospital, locked up for killing his wife. And then of course there’s “The Wolf of Wall Street,” where he trades manipulated stocks, abuses Quaaludes, and ensures the financial solvency of innumerable sex workers.

As “wolf” Jordan Belfort, perhaps even more so than in his other roles, Leo was easily misconstrued as just “playing himself,” rather than embodying some indictment of late-century hedonism (“…what these characters represent in this film are ultimately everything that’s wrong with the world we live in,” said DiCaprio after the movie’s release — funny, given how central he himself seemed to be to that very ’90s zeitgeist). Surrounded by his team of loyal, if homely, penny-stock pushers, Belfort calls up memories of Leo’s real-life late-’90s entourage who, as Sales put it, served as “unofficial bodyguards, although it’s unclear sometimes whether this is for his benefit or for theirs.”

If art imitates life, DiCaprio’s onscreen oeuvre started to resemble a bloated parody of the cocky A-list lifestyle that he and his hormonal bro-pals once collectively defined. Tie in a string of supermodel girlfriends across a decade (and then half a catwalk across the next), and it’s easy to see how Leo’s acting talent has been outshined by an outsized reputation for cross-continent womanizing, his performances codified into a predictable set of default brow lifts and “pretty crumply cry faces.”

Enter Alejandro González Iñárritu, the Mexican writer and director with a knack for lyric gravitas that rivals Scorsese’s grit. For his lead role in “The Revenant” as nineteenth-century fur trapper Hugh Glass, DiCaprio has fetched his fifth nomination for an Oscar (the first was for "Gilbert Grape," at 18), and critics have consistently posited that this could be his year. Hailed by Vulture as a “spittle-speckled, blood-soaked revenge turn that successfully exterminates every last vestige of [DiCaprio’s] teen-dream twinkdom,” the film’s take on vengeance seems less “Cape Fear” than an introspective spiritual pilgrimage (the kind that calls for a whole lot of carnage).

It is here that Iñárritu’s advised rejection of irony plays a vital role in bringing out the actor’s best. For all the attention and flak the film has garnered for its “extreme” violence and conditions of filming, Leo’s full-throttle performance is central to the film’s endurability over its 2.5 hours (in a similar way that he has ably carried many an interminable Scorsese feature). “You feel the intimacy of both man and beast, you feel the sweat and the heat coming off of the animal,” the actor has said of the now iconic scene in which Mama Bear makes minestrone out of Glass’s flailing body. It’s as though the nine months the actor suffered through the making of the film proved a penance for his party-boy past—early, ludicrous online rumors that he was “raped” by the bear exposing a collective sadistic appetite for all-out Leo defilement.

“I like to do things that scare me,” said DiCaprio 20 years ago, after a scrape with a stubborn parachute over the California desert. In this (natural) light, Glass’s penchant in “The Revenant” for sub-zero wilderness parkour might seem like just another demonstration of the actor’s persistent belief in his own invincibility. “I ain’t afraid to die anymore. I done it already,” grumbles Glass from the depths of a self-cauterized throat, the same channel from which he hocks a loogie of bison liver later in the film.

But Iñárritu’s Glass is ultimately a Romantic hero, which makes sense given that the director (unlike Blake before him) claims that “innocence is much more powerful than experience.” Never mind all the swimming upstream in frozen waters or couch-surfing in the carcass of a fallen horse: Leo’s unflappable trapper might reestablish his manhood through Sisyphean feats against nature, but his virtue lies more in an unshakeable, nearly childlike belief that true justice is possible. Here, Leo’s history as pure-of-heart vigilante (think “Titanic” or even Baz Luhrmann’s “Romeo + Juliet”) merge with Scorsesean scrap to render a masculine hero appealing to the ethos of 2016. He might not be as pretty—dodging rumors of a flea-invested beard, no less—but in this lack of pulchritude rings a character at once earnest and more profound, a commingling of Leo’s early innocence with a new physiognomic humility, a patent lack of vanity only so impressive because the guy has been feminized for decades. Evidently, in order to drop the sex-idol status once and for all, he needed to star in a film not only absent a real female presence, but ostensibly too “brutal” for women audience members to endure.

The difference between big-R and little-r Romantic in this context is paramount: Leo had to lose any remnants of latter in order to be taken seriously as the former (ironically, the best-selling biography of the actor was titled “Leonardo DiCaprio, Romantic Hero” back in 1998, priceless for its paperback cover alone, on which a facial resemblance to a young Jodie Foster is striking). It’s no accident that there is no romantic female costar in “The Revenant” to remind us of his time as Tiger Beat bait; his late wife may haunt him with breathy arboreal adages till the end, but in the few times she appears onscreen, Glass’s behavior toward her (as that toward any female character in the film) is more paternalistic than libidinous.

And this turn matters. In prior movies where Leo plays papa (“Inception,” “Shutter Island,” “Revolutionary Road,” “Wolf of Wall Street”), any bond with the wife and kids feels so fraught with either dark pathos or outright apathy that it’s hard to take any of it seriously. By contrast, the first shot of “The Revenant” depicts a sleeping Leo snuggled with wife and son in a hut of mud and twigs. In a tender move minutes before the bear attack, Glass puts his hand on his son’s shoulder and says, “You are my son” (conceivably a manly, 1820s version of “I love you”). Throughout, this abiding loyalty to his family, even after their slaughter, proves the emotional crux of the film; if you don’t buy it, you’re not going to buy the next two hours of plotting (plodding?) revenge.

To be seen as a Serious Actor, it can’t hurt to be seen as a Serious Person, and Leo hasn’t fared as well in that department. Among male A-listers today, the actor still seems a touch, well… douchier than the rest. Ryan Gosling’s lukewarm feminist gruel has launched a thousand memes; Matt Damon fêtes his 10-year marriage with a wholesome non-celeb wife and narrates angsty documentaries whilst daddying part-time; Bradley Cooper demands better pay for his (more talented) female costars. As ’90s playboy Brad Pitt grows up to father six kids and produce a cache of socially conscious films, and even Clooney settles down with human rights maverick Amal Alamuddin, DiCaprio has coasted into his forties still unattached and surprisingly reclusive for someone supposedly feening for the public eye. Botching a recent sermon on climate change, the actor’s perpetual arrested development is thrown into starker relief when considering that the rest of his former “posse” (Tobey Maguire, Jay Ferguson, Ethan Suplee, even enfant terrible Harmony Korine) have all settled down, and presumably stopped chasing what made them mildly controversial in the first place.

But maybe he’s finally manning up, or, rather, reminding us of what we loved about him long ago. As Leo put it 22 years back when he was cast in “Gilbert Grape”: “They were looking for a kid that was not only vulnerable but confident, you know? I just tried to be myself, ’cause that's what I am—vulnerable, confident." Playing the titular revenant, DiCaprio resurrects that signature blend of fragility and bravado; no more clippy rejoinders, no more overconfident soap-box platitudes. When Leo wins the Oscar this year, let’s hope he drops the insouciant posturing and displays the humility that his “Revenant” role so grippingly nails—to which many of us might respond like Vera Farmiga’s character toward the end of “The Departed,” after a bedraggled Leo shows up at her door desperate for companionship: “I have to say, your vulnerability is really freaking me out right now. Is it real?”