For candidates, the Iowa caucus is all about getting to know everyday Americans -- or is it?

The fact is, candidates' most meaningful contact is with party activists -- who aren't just like their neighbors 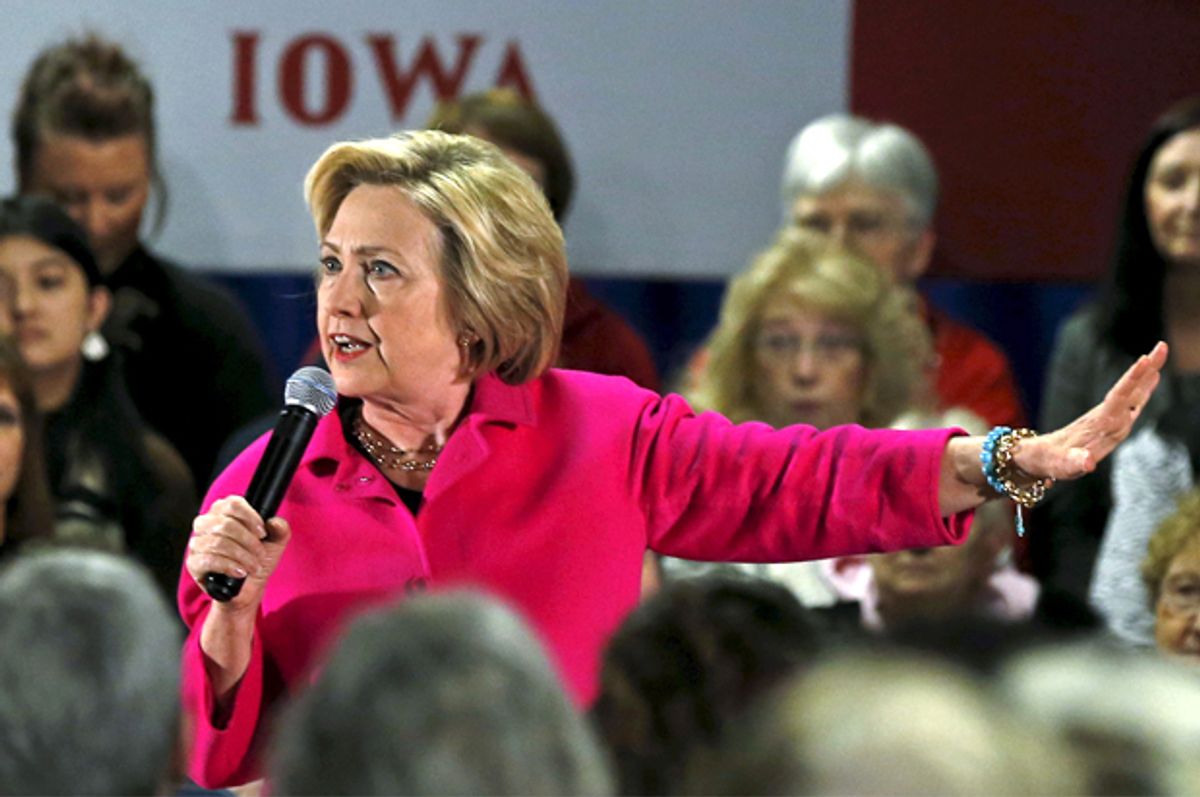 In 2007, I found myself in the balcony section of a college stadium, watching one of Barack Obama’s early Iowa caucus rallies take shape at center court. Like the sweat pants-clad father of three seated next to me, many attendees were taking a break from Sunday chores. They chatted with neighbors, only slowly filling in the folding chairs assembled below. But behind the scenes, the county’s Democratic activists—the stagehands of American politics—were nervously at work setting up chairs, directing the crowd and blaring Bruce Springsteen over the PA system to signal the rally’s beginning. The county’s Democratic chair introduced an opening speaker who frequently headlined at local party events: a repentant Republican with sons serving in Iraq who said that the GOP betrayed him. Obama then mounted the makeshift stage to thunderous applause and pledged to end the Iraq War, rein in healthcare costs, provide quality education, and—most of all—change Washington’s broken politics. The speech was followed by audience questions, many from Democratic activists bird-dogging, or working in concert with PACs to get candidates’ policy pledges into the public record. One asked Obama if he supported scrapping the F-22 Raptor aircraft program. Obama maneuvered politely, saying he would look into it. Afterward, Obama hung around for a bit, signing photos, T-shirts and one man’s sneakers. As he finished, another activist ushered him to a waiting car, which drove him to a campaign bus where Obama spent an hour crossing cornfields to another rally.

Whoever wins the 2016 election will have spent a good deal of time at such Iowa events, and the jury is out on whether this is a positive or a negative for American democracy. Iowa enthusiasts argue that the caucuses are less about the rallies than about forcing candidates to learn about everyday Americans. Iowans say that anyone can attend a backyard barbecue with a presidential candidate, who may even sweep out one’s garage in exchange for caucus support. Iowa’s Republican and Democratic parties regularly issue a joint statement portraying the caucuses as a grass-roots antidote to special interest politics, an opportunity for political outsiders to vet politicians. Elsewhere, politicians talk, but Iowa forces them to listen—but to whom?

I spent the 2008 and 2012 election cycles researching the caucuses and concluded that for all their town-hall pageantry, candidates' most meaningful contacts are with party activists. That is, the backyard barbecues with candidates happen, but they are largely attended by grass-roots volunteers with a track record of organizing presidential campaigns. Candidates’ efforts to woo Iowans also focus on the latter. One activist told me that she accidentally called a sitting senator from the checkout line at Wal-Mart, who—undeterred—lobbied her for 15 minutes. Even in the political offseason, D.C. insiders sometimes jet in for an activist’s 25th wedding anniversary or funeral. Presidential candidates’ fixation with activists is understandable given the Democratic and Republican National Committees' lack of local organization, which forces candidates to rely on volunteers to file the appropriate paperwork, organize rallies and get out the vote. Such dependence breeds familiarity and common outlook. Activists greet candidates at the airport, share meals and drive them to rallies, where candidates repeat the same hometown anecdotes and jokes that activists relate en route. Candidates learn about everyday life largely through the eyes of these activist chaperones.

Grass-roots activists’ access to candidates distorts American politics, because in Iowa and elsewhere activists have grown unlike their neighbors since the 1970s. Contrary to conventional wisdom, social scientists’ surveys find little evidence of a growing ideological rift between a red and blue state mentality within American society. A division has occurred, but largely among a minority who identify strongly with a party, particularly both parties’ activists, whose influence over primaries regularly produces politicians more extreme than their district’s voters. A randomly selected American is not more likely to have extreme views on immigrants, guns or taxes than one decades ago, but a GOP activist likely has strong Republican views on all three.

Changes in Iowa’s grass-roots activists are undeniable. GOP candidates were once hosted at the Chamber of Commerce by captains of local industry who played leading roles in civic life. Republican activists originated from this local business class and complained of entitlements, unions and regulation, but were also moderated by their experiences addressing real community problems. Many believed in public safety nets and had ambivalent feelings about guns, abortion and immigration. They saw the evangelical Christians who later captured their party as embarrassingly low-class. Democratic activists came mostly from the labor movement. I sat at one retired Democratic activist's kitchen table, looking through grainy photos from the 1970s and '80s that showed area labor leaders meeting there to discuss their members’ pocketbook issues with Gephardt, Mondale, Dukakis, Biden and Gore.

Such traditional activists disappeared during the merger movement of the 1980s, the 20th century’s most intense period of corporate consolidation, during which outside corporations acquired meatpacking houses, factories and municipal utilities across the Rust Belt. The suit-clad Chamber leaders who once anchored the GOP lost their businesses and retired to the Sun Belt. Remaining business leaders complained that the corporate managers who replaced them care only about moving up the corporate ladder and buying condos in New York and San Francisco, thus leaving no time for local civic engagement—political or otherwise. Unions too lost ground against the corporate subsidiaries that now employed them and could not support the full-time representatives who once formed their movement’s backbone. Into this vacuum of local leadership stepped new community leaders adapted to the challenges of contemporary American cities: technically minded professionals like city managers and economic development planners, who are officially nonpartisan and preoccupied with wooing corporate subsidiaries or obtaining grants to redevelop broken-down industrial districts. Community leaders left the reins of grass-roots parties unattended and successive waves of sign-waving activists took over.

By the time I arrived in Iowa, grass-roots parties were largely in the hands of political junkies who otherwise played little role in community affairs. Activists were particularly impressed by peers like a GOP “firecracker”: a homemaker who hosted monthly lunches with other activists, watched Fox News religiously, and called the White House whenever something struck her as objectionable. With such activists at the helm, grass-roots parties functioned as echo chambers for hyper-partisan media stories, driving Republicans especially into frequent conflicts with other community groups. Non-activists gritted their teeth while passing Republican pickets at Planned Parenthood or a downtown sex shop and ridiculed activists for making their cities appear populated by a bunch of hicks in the sticks. In this context, one sees why GOP activists self-present as underdogs and support bitter populist campaigns like Trump’s. During this election cycle, we are likely to hear that the Iowa caucuses counteract our nation’s polarized politics by forcing politicians to connect with regular people, but candidates’ deepest connections are with activists who echo polarized campaign rhetoric. But the issue is not the Iowa caucuses, per se. Iowa is a microcosm of deeper shift in grass-roots American politics.

Josh Pacewicz is assistant professor of sociology and urban studies at Brown University.