How con$ervatives betray conservatives: A conservative explains how grifters, buck-rakers and scoundrels have poisoned his movement

The Con$ervative Movement has turned a cause into profiteering, exploited worst impulse of grassroots conservatives 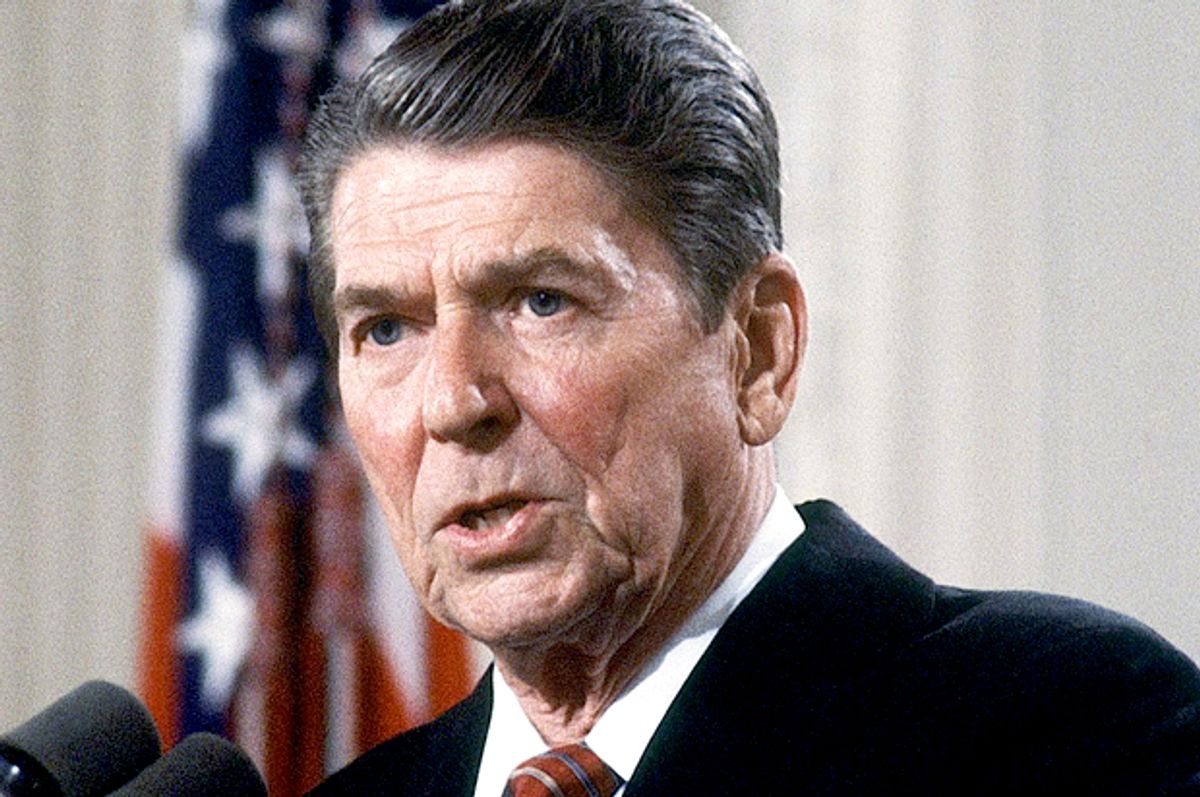 Excerpted from "TOO DUMB TO FAIL:  How the GOP Betrayed the Reagan Revolution to Win Elections (and How It Can Reclaim Its Conservative Roots"

“The best lack all conviction, while the worst are full of passionate intensity.”
—W. B. Yeats, “The Second Coming”

“Every great cause begins as a movement, becomes a business, and eventually degenerates into a racket.”
—Eric Hoffer

If you’re unfamiliar with the problem, in May of 2015, I wrote a piece for the Wall Street Journal titled “The ‘Conservative’ PACs Trolling for Your Money.” In the column, I reported on a group called the Conservative Action Fund who wanted to draft former Florida representative Allen West to run for the US Senate there. “With Marco Rubio running for the White House, this seat is even more vulnerable,” the April 17, 2015, solicitation said before asking recipients to “make a generous gift of $15, $25, $35, or even $50” to circulate a petition. There was just one problem: West was unlikely to run for the Florida Senate seat, because, as I noted in the column, he had moved to Texas.

The same group also sent out a fundraising e-mail asking people to donate money and sign a petition to draft Condi Rice to run for California’s senate seat (it’s unclear which African American Republican—West or Rice—was less likely to run for senate in 2016). Around the same time, Conservative America Now, yet another group with an innocuous sounding name, was raising money to “draft Arizona representative Matt Salmon to challenge Senator John McCain.” In February of 2015, Salmon’s spokesman suggested the email “appears to intentionally mislead potential donors.”

But the problem isn’t limited to groups raising money ostensibly to support hypothetical candidates. According to FEC reports, the Conservative Action Fund (a group we referenced earlier), spent less than 20 percent of funds they raised during the 2014 cycle supporting candidates and campaigns. As is often the case, most of the money went to consultants and overhead. Again, these findings are not unique.

In 2013, Ken Cuccinelli, a staunch conservative who now heads the Senate Conservatives Fund (SCF), narrowly lost his gubernatorial race in Virginia. Rather than sit idly by, he filed a lawsuit alleging that much of the $2.2 million raised in 2013 by an outside group called Conservative StrikeForce PAC was the result of using Cuccinelli’s name—yet the political action committee (PAC) contributed “less than one‑half of one percent” of that amount to his campaign. The PAC’s treasurer, Scott B. Mackenzie, responded to a request for comment in my Wall Street Journal column and conceded the group “fell short of our expectations and we were unable to spend as much on the race as we would have liked.” In May of 2015, a settlement was reached between the parties that appeared to observers to be very favorable for Cuccinelli. Only time will tell if this has a chilling effect on this kind of activity.

The good news is that several media outlets—mainstream as well as ideological—have begun sounding the alarm. In February 2015, conservative blogger John Hawkins published a study of seventeen political action committees. His RightWingNews website found that the bottom ten PACs he examined contributed less than 10 percent of the money they raised on independent expenditures or direct contributions to campaigns. Hawkins then asked a series of depressing rhetorical questions: “How many conservative candidates lost in 2014 because of a lack of funds? How many of them came up short in primaries, lost winnable seats, or desperately tried to fight off better‑funded challengers? How much of a difference would another $50 million have made last year? That’s a very relevant question because the ten PACs at the bottom of this list spent $54,318,498 and only paid out $3,621,896 to help get Republicans elected.”

So why do they do it? In some cases, we need to understand that fledgling groups require a lot of overhead to get started. But that excuse certainly doesn’t account for all of this. Another answer might simply be incompetence. But it’s also likely that some of these groups are simply bad actors whose work is a net negative for the conservative movement. Some might have started with bad motives. But many, I suspect, began with noble intentions and were seduced into the dark side. (If you’re looking to make money and can’t cut it in the business world or as a candidate or political operative, then this is a pretty good gig.)

And for former politicians, who says cashing in at some lobbying firm is the only way to go? Creating your own gig in the Con$ervative Movement is a great way to build a retirement nest egg. Consider the case of former House Majority Leader Dick Armey, who was essentially forced out of his position as chairman of the Tea Party group FreedomWorks in late 2012. Armey lost an internal power struggle with then FreedomWorks president Matt Kibbe, a bespectacled libertarian known for his ridiculously long sideburns, after Armey raised concerns over royalties paid to Kibbe for his ironically titled book Hostile Takeover. (Armey argued FreedomWorks’ resources were used to write and market Kibbe’s book and that Kibbe was personally profiting at the expense of the organization.) But it’s hard to feel sorry for Armey. He landed softly thanks to a golden parachute. As ABC News reported, “Under the terms of the deal, Armey will receive $400,000 a year until he is 92—a total of $8 million—to be a consultant.”

Even though the examples I’ve cited undoubtedly harm the conservative cause, sucking up resources that might otherwise be spent on electing conservative candidates, few are illegal. And it’s not just the Tea Party groups, either. Conservative consultants and vendors have aroused suspicion, too. In July of 2014, a Fox affiliate in Detroit, WJBK‑TV, ran an investigative report package on conservative direct mail firms that were raising money from elderly and often ill conservatives, in some cases to fill the coffers of candidates who weren’t even running for office. “Campaign finance experts say there’s no law against raising money for people who don’t end up running for office, and it’s okay for fundraisers to pay themselves almost all of the funds they raise as long as they fill out the proper paperwork,” the report said.

Nobody should begrudge conservative candidates or organizations for paying their employees well, and it’s impossible to eliminate all overhead (it takes money to make money, as they say). Nor should we criticize political consultants for earning a living. (Disclosure: As mentioned earlier, my wife is a political fundraiser who has consulted for conservative candidates such as Ted Cruz, Rick Perry, and Ken Cuccinelli. She’s damn good, and worth every penny.) But judging appropriate behavior from inappropriate behavior is sort of like the old line about pornography: you can’t define it, but you know it when you see it.

The question is, at what point do these things become a net negative for the conservative movement? If you’re adding value, you should, by all means, be compensated well. But the problem is that, as the Eric Hoffer epigraph at the start of this chapter suggests, this has gone from a “movement” to a “business” to a “racket” for far too many people.

And it’s a racket with consequences. Even if you put aside the moral and ethical questions of lining your pockets by taking the last twenty-five dollars from an old lady who just wants to defend the life of an unborn baby, consider the possible bottom line consequences for a conservative movement whose resources are going to enrich political operatives. These groups and consultants are taking points off of the scoreboard. It’s hard to quantify how much money is wasted—money that could have been used to fund an ad for a conservative candidate or to keep the phones turned on at a pregnancy crisis center. But as the aforementioned study conducted by Right-WingNews suggested, the worst ten PACs alone cost the conservative movement $50 million in just one election cycle.

The Pander and the Damage Done

In order to raise money from the masses, organizations and consultants are also helping dumb down conservatism. In some cases, this consists of rhetoric about taking down the establishment and the “ruling class.” In other cases, it is accomplished by stirring up paranoia and anger among the base, often to get them to sign petitions (and almost every online petition is a ruse to get you on e‑mail lists that can then be sold) or to clog the phone lines of House members so that reasonably conservative Congressmen can be lectured to about why shutting down the government is, in fact, a good idea that will work “if only they have the guts and courage to try.”

The irony is that the people who tell the base what they want to hear are characterized as courageous, while the people willing to stand up to them are labeled cowards. And some of us have our conservatism questioned and are labeled RINOs (Republicans In Name Only).

But it’s not just outside groups and venders pocketing money that should be spent on candidates. In 2013, a reporter for ProPublica, a nonprofit organization that specializes in investigative journalism, alleged all sorts of unethical practices by a group ostensibly set up to help support the troops. According to reporter Kim Barker, “an examination of its fund‑raising appeals, tax records, and other documents shows that Move America Forward has repeatedly misled donors and inflated its charitable accomplishments, while funneling millions of dollars in revenue to the men behind the group and their political consulting firms.” One of the men behind the group is Sal Russo, a longtime political consultant who is chief strategist for the Tea Party Express.

Excerpted from "TOO DUMB TO FAIL:  How the GOP Betrayed the Reagan Revolution to Win Elections (and How It Can Reclaim Its Conservative Roots" by Matt K. Lewis, with permission from Hachette Books, a division of Hachette Book Group.  Copyright 2016 by Matt K. Lewis. All rights reserved.

Matt K. Lewis is a senior contributor for The Daily Caller, a contributing editor at TheWeek.com, and a frequent columnist at The Daily Beast and The Telegraph (UK). He records a weekly podcast, “Matt Lewis and the News.” Business Insider listed him as one of the 50 “Pundits You Need To Pay Attention To,” and in 2012, the American Conservative Union honored Matt as their CPAC “Blogger of the Year.” He lives in Alexandria, Virginia.