"It's not a guilty pleasure": "American Crime Story" faces the complexities of the O.J. trial head-on

The cast of Ryan Murphy's new show discuss O.J Simpson, race, justice and where they watched the white Bronco chase 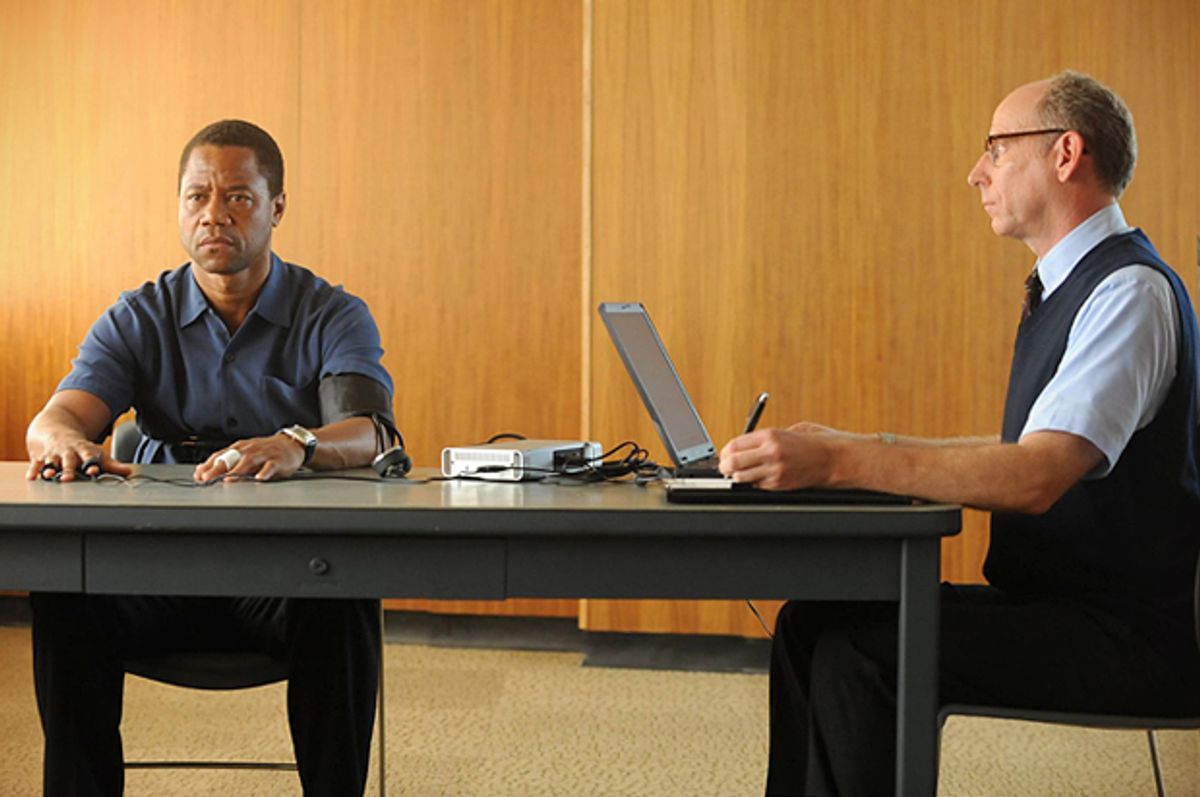 Cuba Gooding Jr. was watching the New York Knicks take on the Houston Rockets in Game 5 of the NBA Finals, when it happened.

Sterling K. Brown was watching the big game too, but he was in St. Louis.

Sarah Paulson remembers being at a friend’s house in Brooklyn Heights. “It was this sort of funny thing … whatever we were watching, it kept interrupting,” she recalls.

David Schwimmer watched it in his Los Angeles apartment. “That whole chunk of time was an unusual time for me personally,” he recalled. “I was living in L.A. and highly aware of the tension here, but just got one of the biggest breaks of my career: We’d just shot the ‘Friends’ pilot. So it was this crazy experience of entering the dizzying world of first real celebrity … while also being very attuned to the real world.”

Most people, including the stars of FX’s “American Crime Story: The People v. O.J. Simpson,” remember where they were when Simpson – football legend, Hall of Famer, actor and Hertz pitchman -- led cops on a low-speed freeway chase in a white Bronco. Days after his ex-wife Nicole Simpson and her friend Ronald Goldman were found stabbed to death outside of Nicole’s home, Simpson was charged with two counts of murder and had agreed to turn himself in.

Instead, on June 17, 1994, Simpson fled while threatening to kill himself with a gun. His best friend Al Cowlings drove the vehicle for hours as police maintained a safe distance behind them. Some 95 million viewers tuned in to watch the pursuit live, filmed from helicopters hovering above the highway.

The incident interrupted that year’s NBA Finals, along with all other previously scheduled national programming. Ultimately it would change television forever. “There was no way to know what was going to happen,” Paulson says, “and what this was preparing the country for, this sort of inception of tabloid television.”

We now know that the case ended up being about so much more than that. O.J. Simpson’s murder trial dominated news headlines for more than a year, touching off heated discussions about race relations, fame and privilege, domestic violence and a biased justice system.

These elements play out within “The People v. O.J. Simpson’s” 10 episodes, the first of which premieres at 10 p.m. Tuesday on FX. But the series also explores other hot-button topics such as gender and cultural bias in the workplace, as well as intraracial tension the case provoked within the African-American community.

“That’s what’s sort of remarkable about the case, that there are these issues sort of vying for dominance,” observes Nina Jacobson, one of the series’ executive producers. “Of course, issues of race ended up trumping all the others. But the other issues were quite present, and we tried to explore all of them.”

“The People v. O.J. Simpson” is the first installment in FX’s new “American Crime Story” anthology franchise, with Jacobson producing along with Ryan Murphy and Brad Simpson. The idea of “American Crime Story” is to examine modern historical turning points through a scripted narrative. (The second installment reportedly will look at Hurricane Katrina and its aftermath.)

Here, intimate portrayals of the O.J. Simpson trial’s better-known personalities are woven together, resulting in an incredibly addictive story – one largely based on Jeffrey Toobin’s book “The Run of His Life: The People v. O.J. Simpson.”

This being a Ryan Murphy production—albeit one executed with a restraint not typical of his other productions -- an all-star cast was recruited for the key roles. Prosecutors Marcia Clark and Christopher Darden are portrayed by Paulson and Brown; defense attorneys Johnnie Cochran, Robert Kardashian and Robert Shapiro are played by Courtney B. Vance, David Schwimmer and John Travolta, respectively. Gooding embodies the role of O.J., ably capturing his emotional peaks and valleys as the trial wears on.

What most Americans knew about the prosecutors, defense attorneys and others tangential to the case was based upon the images filtered through tabloid articles or edited news footage. To the average person, these men and women were playing fascinating roles in an unscripted drama that was more exciting that any fiction on daytime television.

Taking that notion a step further, “The People v. O.J. Simpson” transforms them into complicated characters dealing with personal challenges at home while navigating each other’s outsize egos and reputations in public. The goal, Brad Simpson explains, was to humanize them more than live new coverage ever did.

“Our hope for the show is that if you watch it, and if you’re one of those people who really hated Johnnie Cochran, you come out with him contextualized,” he continues. “If you don’t love him, you at least understand who he was. And that’s the same for every character.”

This is the reason that Paulson found herself taking tremendous care in portraying Clark, who was relentlessly vilified in the press. “I remember sort of buying into this notion, and this idea that I was being fed by the media, about …what kind of woman she was,” Paulson said. “Strident. Overly earnest. Bitch. Just all sorts of negative, rather hideous ways of describing what I now have come to believe is a very powerful, strong woman who was under more scrutiny than I think anyone should be expected to survive.”

The writers depict Clark as a driven woman balancing the demands of being a top prosecutor in the district attorney’s office with being a single mom navigating a poisonous divorce. Of course, those who followed the trial’s coverage all those years ago may recall the cruel commentary about her personal style, urging her to change her hair and her clothes. She eventually did, with disastrous results.

“I had developed quite a brain crush on her, just revering her and not really being able to fathom how she managed, dealing with that ex-husband and that public custody trial, and raising those 3- and 5-year-old boys. You know, I just think it was a very Herculean task,” Paulson says, later adding, “It rained in her bedroom the entire time during the trial. She was always so sick. There was so much stuff we couldn’t even put in. But yes, she was run ragged.”

Brown also wanted to do right by Darden, a lesser-known figure before the Simpson trial, surmising, “I believe he was one of the more traumatized people at the outcome and the acquittal, probably even more than Marcia. He’s a black man, a proud black man who loved his community greatly, and who no longer felt welcome in that community.”

Citing a media poll conducted at the time, which revealed that a majority of African-Americans viewed Darden as a “sellout,” “It was heartbreaking,” Brown says. “And to hear him talk about it on Charlie Rose, and I’ve heard him talk about it on Oprah as well … that specter sort of hung over him for quite some time, if it’s not even still hanging over him today.”

While “The People v. O.J. Simpson” was filming, producers banned the actors from contacting any of the people their characters were based on until the production had nearly ended, to prevent them from overly influencing their performances. Once the ban was lifted, Paulson did manage to spend time with Clark. Brown reached out to Darden twice, but received no response.

Gooding chose not to visit Simpson in the Nevada prison where he’s serving out a 33-year conviction, for a robbery he led in 2007. “I didn’t want that man’s psyche to affect my performance,” he explains. “I’m playing him at a time when he was charismatic, arrogantly egotistical, flamboyant, not only a movie star but a marquee sports figure superstar. And that’s the physical demeanor that I had to try to capture.”

In some cases, of course, meeting the real person was impossible: Robert Kardashian died in 2003, and Johnnie Cochran passed away in 2005. Schwimmer did speak with Kris Jenner about Robert, expressing gratitude that her input helped him find a way into portraying a man most of us knew next to nothing about. Beyond, that is, being O.J.’s best friend who reactivated his license to serve on his defense team as well as being the father of Kim, Khloe and Kourtney and Rob.

“In a way, the whole thing is about hubris,” Schwimmer observes. “And Robert’s the only person who had nothing to gain. … You know, Jeffrey [Toobin] and I have met a few times. And after doing my research and talking to Kris and thinking about Robert, I took issue with how he portrays Robert in the book. He doesn’t talk about him a lot, but the little he does, it feels like it was a little self-serving.

“In talking about it with him, years later, [Toobin] realizes …that was probably unfair, because he didn’t really know about who Robert was or what his motivations were,” Schwimmer adds. “But who knows?”

Vance faced a similar challenge in building the role of Cochran. Although he and his wife, Angela Bassett, met the attorney at a party at the attorney’s house more than a decade ago, he said they didn’t interact very much. But he says the image we have of Cochran based on the trial – a man given to flamboyant suits and speeches delivered, at times, as if from a pulpit – tells only a sliver of the story.

Robert Shapiro, meanwhile is alive and well and hawking LegalZoom on TV. Even so, Travolta declined to meet him. “I could have if I wanted to, but I was advised not to for a few different reasons. I did get a letter from him at one point, saying he was very happy I was playing him.”

“And let’s face it,” he adds, “it is a questionable concept when a lawyer wants to get famous from a case, versus serving a case. I find that they were all guilty of that … I have to use lawyers to help me survive. I don’t want them to use my tragedy to become famous. So that’s an interesting thing that we had to explore: Who are these people that would put themselves in this position?”

Beyond these characterizations, the producers and actors in “The People v. O.J. Simpson” each hope that viewers can appreciate the story’s relevance in the context of race relations today.

“It is a before and after moment, in terms of our ability to consume tragedy as entertainment as a culture. Certainly we hope people will talk about that,” Jacobson said. “But if you thought that you could be over hearing people having complicated conversations about race, about gender, about class -- about all the things that have or haven’t changed – well, it would feel like an incredible accomplishment if just we got people talking.”

Gooding also hopes a central element in the story won’t be overlooked. “There was a day I wept in my trailer, because of my embarrassment and guilt at feeling jubilation for the ‘not guilty’ verdict. Not because I felt that [O.J.] is guilty now, but it was more about, these two families lost their loved ones.”

“I just felt like, ‘Shit…how could I get so caught up in race relations when this violent crime happened?’”