The Clintons' sordid race game: No one will say it, but the Clintons' rise was premised on repudiating black voters

Here's what Bill and Hillary mean to me: Sister Souljah, welfare reform, Ricky Ray Rector and the crime bill 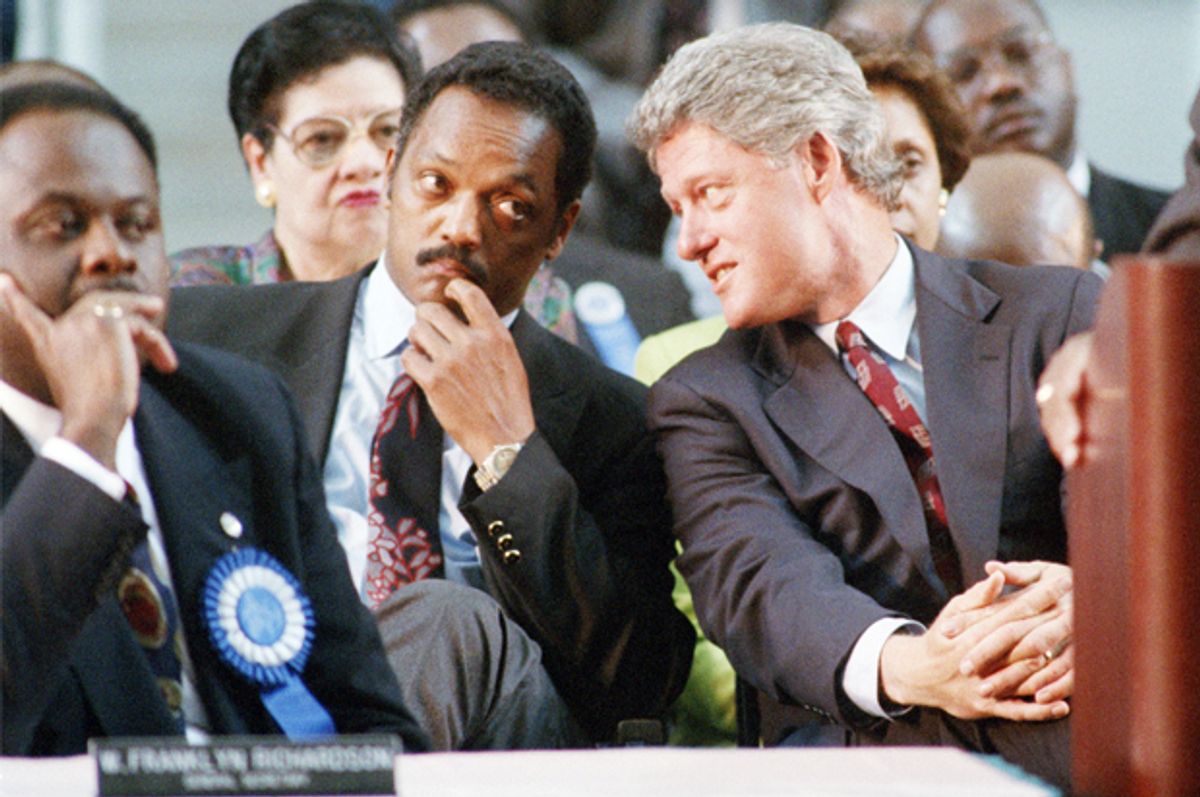 It may be a generational thing—I was born in 1967—but this is what Hillary and Bill Clinton will always mean to me: Sister Souljah, Ricky Ray Rector, welfare reform, and the crime bill. And beyond—really, behind—all that, the desperate desire to win over white voters by declaring to the American electorate: We are not the Party of Jesse Jackson, we are not the Rainbow Coalition.

Many of the liberal journalists who are supporting Hillary Clinton’s candidacy are too young to remember what the Clintons did to American politics and the Democratic Party in the 1990s. But even journalists who are old enough seem to have forgotten just how much the Clintons’ national ascendancy was premised on the repudiation of black voters and black interests. This was a move that was both inspired and applauded by a small but influential group of Beltway journalists and party strategists, who believed making the Democrats a white middle-class party was the only path back to the White House after wandering for 12 years in the Republican wilderness.

But for me, it’s as vivid as yesterday. I still remember Clinton pollster Stanley Greenberg’s American Prospect article (reposted in 2005), which claimed that the Democrats were “too identified with minorities and special interests to speak for average Americans.” Black people not being average Americans, you see. This article, American Prospect co-editor Paul Starr proudly proclaimed last year, is “widely recognized for its influence on Bill Clinton’s presidential campaign” in 1992. Starr, incidentally, just penned a defense in Politico of Hillary Clinton as the only serious Democratic candidate.

Maybe I remember this all because it happened at a formative period of my life, during my first years in graduate school. My roommate and closest friend throughout those years was Paul Frymer, who’s now a political science professor at Princeton. Paul’s dissertation—which he began to write in the apartment we shared on Canner Street in New Haven, and which formed the basis for his now classic book "Uneasy Alliances," which shows how the combination of racism and the two-party system encourages African-American voters to be “captured” (taken for granted) by one of the parties—was born out of the tremendous frustration and anger many of us felt about the wrenching transformation the Clintons imposed upon the Democratic Party.

I was recently rereading some of Paul’s book, and it brought back that whole moment in all its sordid detail. Like the fact, according to an article by Andrew Hacker, which Paul cites, that “for the first time in almost half a century, the party’s [1992] platform made no mention of redressing racial injustice.” (I reread the platform: It does mention affirmative action and civil rights in passing, but it’s cursory.)

Or the fact that in their 1992 book, "Putting People First," Bill Clinton and Al Gore only mentioned race once. And that was to oppose the idea of racial quotas.

Or the fact that their chapter on civil rights was mostly about people with disabilities.

Or the fact that Clinton’s real target in his Sister Souljah speech was Jesse Jackson, who was blind-sided and humiliated by Clinton’s tirade as he sat next to Clinton on the dais. (So embedded in the Clinton psyche is this Jesse Jackson boogeyman that Bill couldn’t resist calling it up in 2008, when Hillary was tanking in South Carolina. And why not? It had worked in 1992.)

Or the fact, which Frymer doesn’t mention in his book, that Hillary Clinton in 1996 resorted to the worst sort of animal imagery to describe teenage criminals:

They are not just gangs of kids anymore. They are often the kinds of kids that are called ‘super-predators.’ No conscience, no empathy. We can talk about why they ended up that way but first we have to bring them to heel.

As one wag said on Facebook the other night—in response to the question “Bring them to heel? Who says that shit out loud?”—“Dog trainers.”

And not just me. As Michelle Alexander, author of "The New Jim Crow," which helped galvanize the movement against mass incarceration in this country, posted on Facebook on Thursday night:

If anyone doubts that the mainstream media fails to tell the truth about our political system (and its true winners and losers), the spectacle of large majorities of black folks supporting Hillary Clinton in the primary races ought to be proof enough. I can't believe Hillary would be coasting into the primaries with her current margin of black support if most people knew how much damage the Clintons have done - the millions of families that were destroyed the last time they were in the White House thanks to their boastful embrace of the mass incarceration machine and their total capitulation to the right-wing narrative on race, crime, welfare and taxes. There's so much more to say on this topic and it's a shame that more people aren't saying it. I think it's time we have that conversation.

Lest we think this is just Bill or ancient history, we saw the ghost of elections past on Monday night at the Iowa town hall event. Asked which president most inspired her, Hillary Clinton said it was Lincoln. And then went on to say this:

Lincoln was willing to reconcile and forgive. And I don’t know what our country might have been like had he not been murdered, but I bet that it might have been a little less rancorous, a little more forgiving and tolerant, that might possibly have brought people back together more quickly.

But instead, you know, we had Reconstruction, we had the re-instigation of segregation and Jim Crow. We had people in the South feeling totally discouraged and defiant. So, I really do believe he could have very well put us on a different path.… let’s also think about how we do try to summon up those better angels, and to treat each other, even when we disagree, fundamentally disagree, treat each other with more respect, and agree to disagree more civilly, and try to be inspired by, I think, the greatest of our presidents.

That comment is straight-up Dunning School, a Southern apologist account of the Civil War, Reconstruction and Jim Crow, which dominated history textbooks and American politics more generally throughout the 20th century. It holds that the great mistake of the Northern anti-slavery forces was that they pushed too hard, that instead of taking on the slaveholders’ revanchism they should have accommodated it.

But Clinton’s comment reflects less, I suspect, the history lessons she learned in school in the 1950s and 1960s than it does the political lessons she learned in the Arkansas governor’s mansion in the 1970s and 1980s. Namely, that in the face of white reactionary intransigence, the best thing to do is nip and tuck, compromise, conciliate, mollify, appease. In other words, be a Clinton. And not a Sanders.

In 1858, Lincoln was running for Senate in Illinois. His opponent was Stephen Douglas, whom Lincoln debated in a series of famous confrontations. Opposition to the expansion of slavery was the fundamental question dividing them.

By all rights, Lincoln should have received the support of opponents of slavery like Horace Greeley, the famed newspaperman. He finally would in 1860, but in 1858, Greeley backed Douglas. Which raised questions for many of Lincoln’s supporters of whether Greeley was on the take.

In a famous letter to Charles Wilson, Lincoln tried to damp down on that speculation. It wasn’t money that led Greeley to Douglas, Lincoln wrote. It was a more corrupting lure: the desire to be practical, calculated, sophisticated, realistic. That’s what led Greeley to his pact with the devil.

It is because he thinks Douglas’ superior position, reputation, experience and ability, if you please, would more than compensate for his lack of a pure republican position, and therefore, his reelection do the general cause of republicanism more good than would the election of any one of our better undistinguished pure republicans.