Turning Texas blue?: 3 trends could undo the 20 years of Republican rule Texas has endured since the days of Ann Richards

It will take some doing, but if Democrats can capitalize on the GOP's weaknesses, there might be hope for Texas 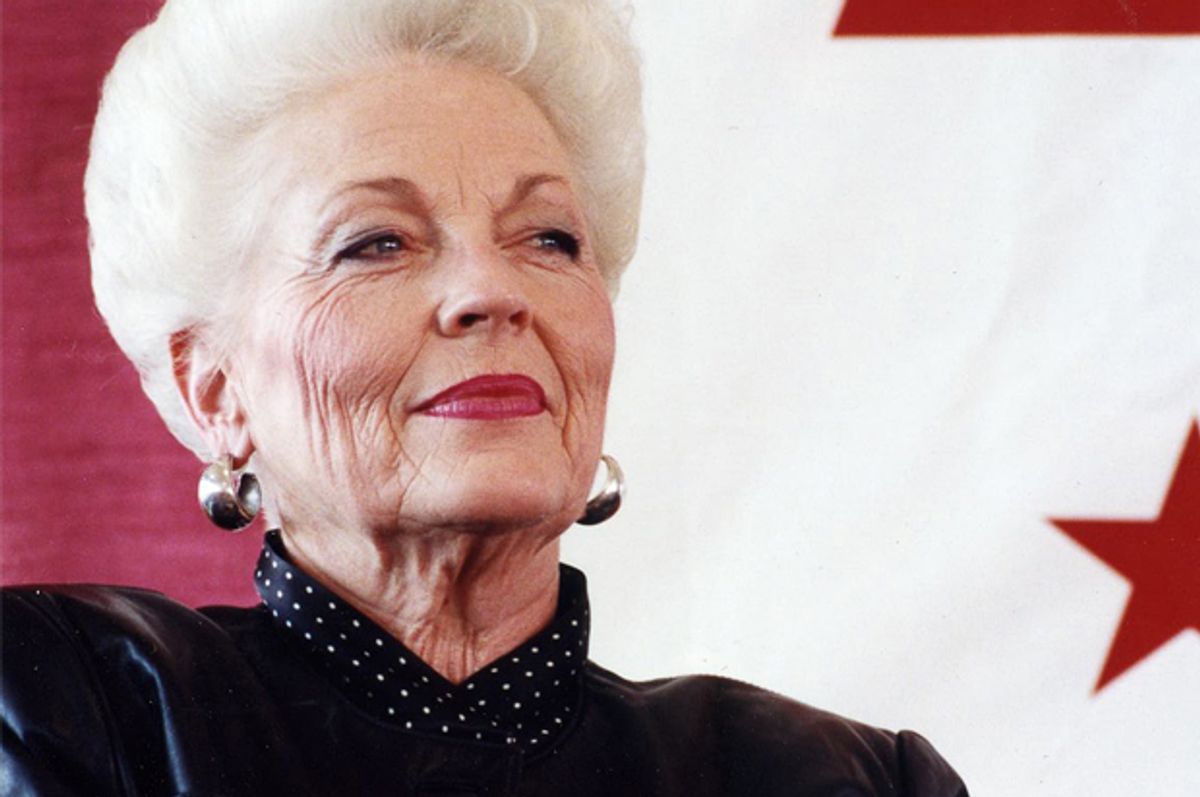 Today Texas is the reddest of the red-hot states, covered by a big bubble of hot air that protects the most reactionary, radical and rabid set of officeholders that much of the country has ever seen. Hot red winds escape the bubble every once in a while and blow out of Texas onto the rest of you.  You’ve already been singed by the fire and fury of Texas Sen. Ted Cruz, whose emergence as an alternative to presidential candidate Donald Trump creates fear and trepidation among Republicans and Democrats alike. And although you might have had a few laughs when former Gov. Rick Perry flopped again nationally, you’ve had to endure the follies of the other presidential seekers who grew up here: Jeb Bush, Rand Paul and Carly Fiorina.

Yes, we tend to export our craziness.  The latest bizarre news is that Gov. Greg Abbott, who hovers on the extreme edge of the lunatic fringe, has called for a national convention to throw out our 229-year-old constitution and allow the states to nullify federal laws and override Supreme Court decisions – issues that were settled in the violence of the Civil War. It won’t be long before the crazies in other states start clamoring for a constitutional do-over, too. So, don’t think we don’t matter just because our 38 presidential electoral votes may not be in serious play in 2016. Texas is going to wield influence over the rest of you, like it or not.

The funny thing is that if Democrats could get their act together, we might give you some hope along with the craziness. That big red bubble that covers Texas is beginning to sprout a few leaks.

Three trends are underway here that could undo the 20 years of Republican rule we have endured since George W. Bush defeated the most dynamic and progressive governor Texas ever had – the late Ann Richards. Without her there’s been little humor or light coming from either our hapless left or our crazy right. But change is possible – even though Texas Dems got crushed along with the rest of the national party in 2014.

The first indication of the potential shift here is that Republicans have finally reached their peak voting strength. They can’t win more white votes than the 75 percent they got in the 2014 governor’s race against the ill-fated Wendy Davis campaign. The percentage of eligible white voters among the Texas electorate is declining. With that decline we are beginning to see a drop in Republican vote margins in areas of their greatest strength  -- the seven big suburbs that surround Dallas, Houston, San Antonio and Austin.  One of those once-reliable Republican suburbs outside of Houston has already moved into swing vote territory. Others will follow because Texas suburbs are no longer the sole domains of white voters. Over the past decade, an influx of African-American, Hispanic, and Asian homeowners has moved into Texas suburbs to create increasingly diverse communities. With the organic growth of traditional Democratic voters among African-Americans and Latinos who live in the cities, plus the in-migration of culturally progressive millennials who are flocking to Austin and Dallas, Republican dominance will soon diminish.

The second trend that bodes ill for Texas Republicans is the intensity of their internal battles against each other. The war is on between pragmatic Republicans and Tea Party extremists. The upcoming March primary elections could blow the party wide open. While the national media will focus on the Republican convention delegate vote counts for Trump or Cruz, the real significance for the future of the Republican Party in Texas will come in local races.

There are almost two-dozen Republican primary races for the 150-member state Legislature that will determine if Texas is merely conservative or crackpot crazy. Ultra-right candidates are challenging traditional Republicans who, in turn, have recruited candidates to challenge far-right incumbents. The infighting reaches to the highest levels of the GOP. One reason we are seeing such bizarre eruptions from Gov. Abbott is that he lives in fear that Tea Party favorite Lt. Gov. Dan Patrick will challenge his 2018 reelection bid. Abbott’s maneuvers are designed to move him to the right of Patrick, and for now the top two officeholders just keep outdoing each other in wacko words and deeds.

Finally, the third trend that could damage the GOP is growing public awareness of the corruption, cronyism and hypocrisy that have become rampant among the current crop of statewide officeholders. Republican Attorney General Ken Paxton has indictments for felony securities law violations hanging over his head and he is subject of another criminal investigation about some of his real estate dealings. Cronyism is rampant in the awarding of multimillion-dollar state contracts to political friends and contributors. Watchdog groups and mainstream investigative reporters are having a field day digging up dirt. And officeholders who have made fiscal conservatism their clarion call have handed out so many tax-funded cash bonuses to their top staffers that you would think they were Wall Street bankers.

Coupled with these trends – and little noticed for political impact by activists in either party – is the precipitous drop in the price of oil. Republicans have bragged about how they created the great “Texas Miracle” of phenomenal job growth that led the nation for almost a decade. But Texas’ job growth was built on the price of oil at $100 a barrel  – and not much else. When the oil sector booms, so does the rest of Texas. In the past 18 months, there has been a 70 percent drop in the price of oil, now hovering below $30 a barrel. When oil prices plummet so rapidly, Texas workers lose jobs in many sectors of the economy– and so do statewide incumbent officeholders – even Republicans. It has happened before and will happen again.

The question is whether Democrats can see and act on the emerging trends that they misunderstood and ignored in the disastrous rout of 2014.

Until now, Dems have done little to capitalize on the new opportunities, partly because they’ve lacked dynamic leadership. But they’ve also ignored political reality about their own situation. Activists have been wallowing in wishful thinking, assuming that all they have to do is wait for the exploding Hispanic demographics to kick in and bring new voters to their cause. That’s not going to happen automatically. Democrats are going to have to work harder than ever to woo and win Texas’ diverse Hispanic community, instead of taking it for granted as they have been inclined to do in the past two elections for governor.

But that’s not all they have to do. Texas progressives, like Democrats nationally, are going to have to start competing for middle- and working-class white voters instead of ignoring them as they did in the 2014 races. Texas’ white voters still make up about 65 percent of those who actually cast a ballot on Election Day. And no Democrat can win statewide without making inroads among white voters, something they have not even attempted in almost 20 years.

In 2008 and 2012, Barack Obama lost Texas, even though he carried the African-American vote by 98 percent and won four of the six biggest cities. But he only got 26 percent of the white vote. If he had managed to win more than 30 percent of the white vote in Texas as he did in other Southern states like Virginia, Florida and North Carolina, and if he had invested as heavily in a get-out-the-vote effort among traditional Democratic base voters as he did in those states, he might have won Texas too. Hard to believe, isn’t it?

There is a path for Democrats out of this morass. They just have to look at their world with fresh eyes, settle on a strong leader, motivate their base voters, and figure out how to expand their share of white voters from 25 percent to at least 35 percent of the electorate. They need to get ready because it won’t be long until the suburbs no longer automatically deliver huge vote margins for Republicans. And GOP officials will be occupied for several years trying to bring the party together after its candidates finish cannibalizing each other in 2016 and 2018. That’s when Texas' 38 electoral votes will finally come into play. When Republicans can no longer rely on a reliable Red State Texas, the whole dynamic of presidential elections will change. Each party will have to cobble together different state-by-state strategies to reach the magic 270 votes for victory in the Electoral College. So, don’t write us off just yet. Texas is still going to matter – one way or another.

Mary Beth Rogers is the last person to successfully campaign manage a Democrat to the statehouse in Austin. Rogers previously held the Lloyd M. Bentsen Chair in Business and Public Policy at the Lyndon B. Johnson School of Public Affairs at the University of Texas at Austin before becoming president and CEO of the PBS affiliate in Austin. Her latest book, "Turning Texas Blue: What It Will Take to Break the GOP Grip on America's Reddest State," is out now from St. Martin’s Press.