Don't put Obama on the Court: Even if confirmed (unlikely), Justice Obama would be a waste

He'd be underpaid, bored, and have to recuse himself on Obamacare cases. Obama on the Supreme Court is a bad idea 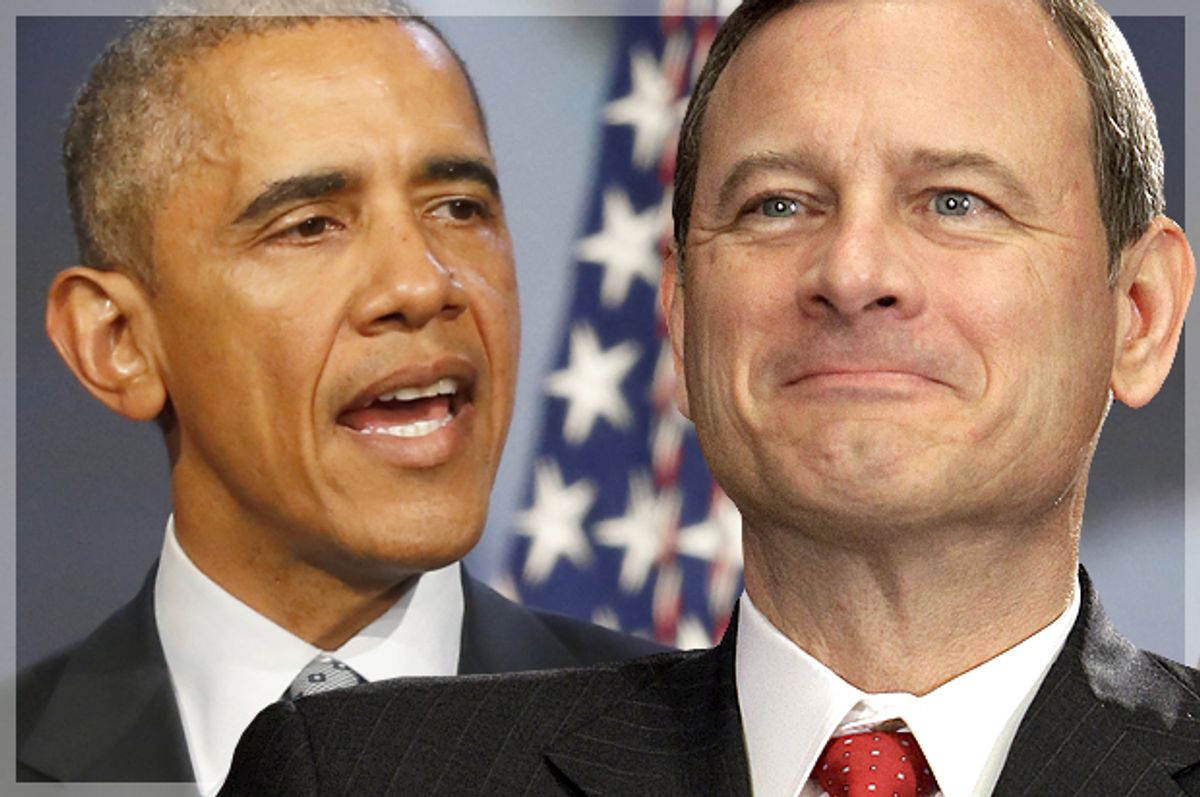 At a campaign event last Tuesday, Hillary Clinton was asked if she would consider appointing Barack Obama to the Supreme Court. "Wow, what a great idea. No one has ever suggested that to me, I love that, wow," she replied. "He may have a few other things to do, but I tell you that's a great idea."

This hypothetical raises three questions: Would putting Obama on the Court be a good thing for President Clinton to do, would his nomination be approved by the Senate, and would he take the job?

As to the first question, the answer is clearly “maybe.” Obama has what have come to be thought of as typical qualifications for being on the Court – he was the head of the Harvard Law Review, he taught constitutional law at an elite university – but he also has something else: significant experience as an elected official.

It used to be considered a major plus for Supreme Court nominees to have personal experience in electoral politics. For example, Earl Warren, considered by many to be the greatest justice of the 20th century, was governor of California before joining the Court. And there’s even a precedent for the appointment a former president: William Howard Taft was Chief Justice during the 1920s.

In recent decades, the practice of appointing former politicians to the Court has lapsed: the last justice with any experience in elected office was Sandra Day O’Connor, who joined the Court 35 years ago. Nominating Obama would be a good way of moving back toward the healthy custom of having at least one justice on the Court who has seen the political world from the inside.

But putting Obama on the Court has downsides for progressives as well.   Justice Obama wouldn’t be able to campaign for candidates; he couldn’t play the role of an ambassador for the Democrats; he wouldn’t, in short, be able to do all sorts of things that ex-presidents can do to help the political causes they support.

Furthermore, he would have to recuse himself – not vote – in cases involving decisions he had taken while president. (Consider the irony of Obama not being able to provide the deciding vote to keep the Affordable Care Act from being gutted by yet another lawsuit attacking it, because he had signed the original legislation).

Would the nomination of Obama get through the Senate? This seems doubtful. When the Senate changed the filibuster rules for executive appointments, it kept the old rules – requiring 60 votes – in place for Supreme Court nominations.

Since Republicans have spent much of the last seven years working themselves into a lather about how Obama is at best a Constitution-trashing leftist quasi-dictator, if not actually a foreign-born Muslim usurper, it’s hard to imagine the Senate confirming Obama unless it has something close to 60 Democrats, which is unlikely to be the case any time in the near future.

Finally, assuming it’s a good enough idea, and that he could be confirmed, would Obama take the job? I doubt it. First, while Obama doesn’t seem like a money-obsessed guy, especially by the standards of our new gilded age, the fact remains that going onto the Court would require him to make a big financial sacrifice, relatively speaking.

For example, federal judges can’t for the most part accept speaking fees. If he’s not on the Court, Obama could easily rake in millions of dollars per year just by giving a couple of speeches a month (Bill Clinton has made more than $100 million giving speeches since he left the presidency).

Second, my guess is that Obama would consider being a Supreme Court justice, given his previous job, simply too boring. Most of the work justices do is, in fact, quite boring. The typical case before the Court doesn’t involve the death penalty or gay marriage or for that matter Obamacare: it’s much more likely to involve reviewing an appellate court’s decision regarding an administrative regulation interpreting a subsection of a statute delegating regulatory oversight of an executive agency’s . . . sorry, I nodded off there for a minute.

So in the end I don’t think we’ll ever be talking about Justice Obama’s opinions. Ex-president Obama’s considerable talents are more likely to be better employed elsewhere.