Highly topical and filled with stars, C.K.'s new webseries will fill the hole on-hiatus "Louie" left in your life 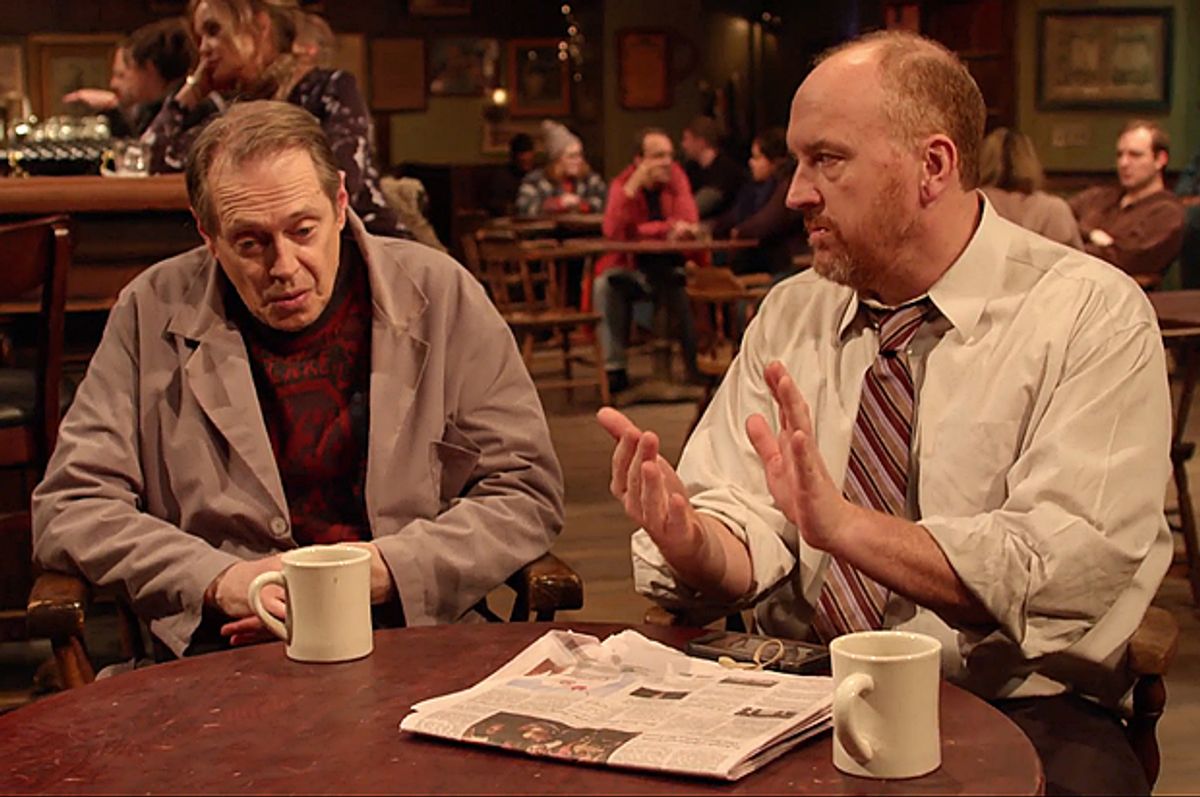 Steve Buscemi and Louis C.K. in "Horace and Pete" (louisck.net)
--

On Saturday morning, comedian Louis C.K. posted a short message on his personal website introducing a “brand new thing,” the first episode of something titled “Horace And Pete,” available to view for five dollars. That’s it. No plot summary, no hint as to who’s starring in it, no schedule for upcoming episodes, no further comments from the writer/director/star. It’s almost comically terse, but coming from Louis C.K., it’s part of the promise he offers his fans: Unvarnished art that speaks for itself with one single no-frills price. In an era where studios routinely send to press the full season of an upcoming show—along with the immediately disposable publicity junk, like a flash drive full of information that’s also on the show’s website, or an accompanying hardcover book full of glossy press photos that no one bothers to look at, or some requisite mildly useful gift such as a branded tote bag—C.K.’s approach is by contrast beautifully and maddeningly simple. It can’t be planned for, and because it’s so niche, it’ll fly under most audiences’ radars—but on the other hand, “Horace And Pete” feels special and precious as a result, unexpected in every way.

The first episode is almost feature-length—67 minutes long, a good 20 minutes longer than most TV drama episodes but still 10 or so minutes shy of a short film. That’s because it is not really an episode or a film, but instead, a stage play, right down to a built-in (short) intermission and the preoccupation theater has with setting. “Horace And Pete” takes place in a bar called Horace and Pete’s, which is both the site and subject of some longstanding grief between the family that runs it. To divulge more details on who exactly all those family members are wouldn’t quite be fair, because one of the things that is so lovely about “Horace And Pete” is that it savors the setup, taking its time with allowing all the pieces of the drama to become known. But the audience is immediately confronted with the odd texture of the relationship between Horace (Louis C.K.), Pete (Steve Buscemi), and Uncle Pete (Alan Alda). Other cast members include Jessica Lange, Aidy Bryant, and Edie Falco. (None of the actors are teased in the opening credits; they just walk in when they walk in, and you say, “Oh, that’s Edie Falco!”) Again, just like theater, the showcasing of such dynamite character performances is a hallmark of the New York stage—though in this first episode, it’s mostly Alda that steals the scene, in a blood-curdling rendition of history’s biggest asshole.

As someone who knows extremely little about the American theater canon, even I can spot that the inspiration for “Horace And Pete” is a loving homage to Eugene O’Neill’s body of work—you’ve got an unstable, drunk grande dame, in Lange, and a angry old crank spewing poison in Uncle Pete. C.K., Buscemi, and others take the roles of the indecisive younger generation, moored between the family duty of misery and individual adventures tinged with even more misery. Whiskey is watered down and mental illness is barely dealt with as the major players come together to decide what to do about this building that has existed in their lives for so long; it is a recollection of the ignorance and intimacy and tragedy at the heart of “Long Day’s Journey Into Night.”

In between the family’s friction, the audience is directed to listen to the casual bickering of drunks and barflies—conversations that wander through the political landscape and social norms, such as a lot of the discussions in C.K.’s other show, “Louie.” It might sound distracting, but it’s riveting. “Horace And Pete” is absurdly topical; the events of the play happen just a day or two before the Iowa caucuses where Trump and Cruz are battling for dominance, and a week before the Super Bowl; in other words, it takes place on the day that it was released, more or less: January 30, 2016. Without any information to go off of about the show’s taping, it’s hard to tell if future episodes will do something similar. But perhaps this ultra-relevance is a tell that the show is being taped, edited, and released with a very short turnaround, more like a late-night show than a TV drama.

And indeed that’s the takeaway of “Horace And Pete”: It’s not easily definable as a format, being the love child of a passion for O’Neill, stand-up comedy, and the most available format C.K. has—a webseries. That makes for a strange and sublime episode, one that is gripping in both how different it is and how familiar it feels. I wasn’t expecting a stage-homage serial drama from Louis C.K.—but trust C.K. to be able to drop something unconventional like this onto the internet with no salesmanship whatsoever and have it land beautifully.