The bloodless coup of “Billions”: This “Game of Thrones” for the hedge-fund set nails the psychological violence of our times 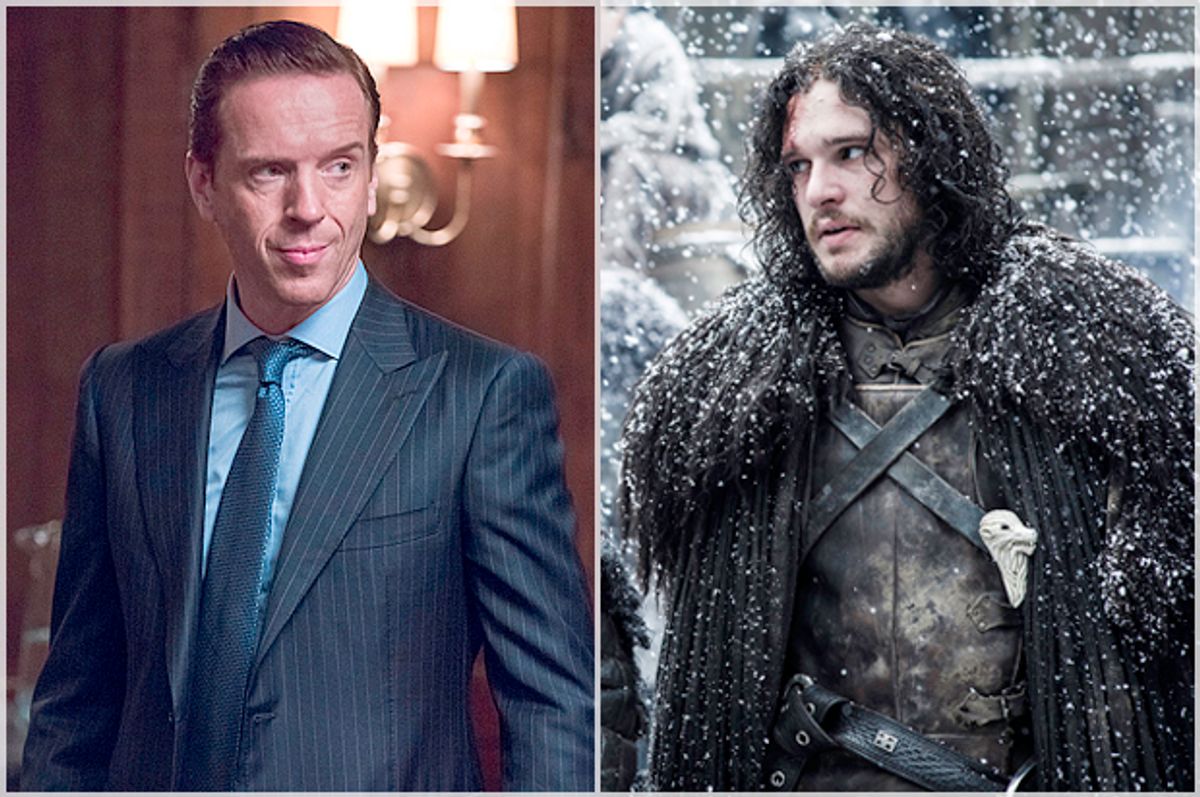 “Game of Thrones” has become famous for its beheadings and notorious for its rapes. “Homeland” offers bloody terrorist attacks and the constant threat of bombs going off in crowded marketplaces. “The Americans” has a beating or shooting in just about every episode. Flash-eating zombies are still all over the place in television and movies – from “The Walking Dead” to the upcoming “Pride and Prejudice and Zombies.” Even the genteel “Downton Abbey” turned to bloody-vomit carnage last night (see the Tarantino-esque gif here).

Showtime’s financial-shenanigans show, “Billions,” seems to be set in a very different, more realistic world. But it’s right there with these other programs. It’s as violent as any of these, but its violence is mostly psychological. Compare it to similarly themed movies – “The Wolf of Wall Street,” “The Big Short” – and it’s clear that it's meaner: It packs loads of offensive behavior into a single hour. “Billions” shows that you don’t have to draw blood to show how cruel people can be. It’s “House of Cards” with money, but without a single likable character or innocent exchange – no trip to the barbecue joint to unwind -- and no need to toss characters in front of subway trains. Forget heroism: Even the little moments of kindness are wrapped in conspiracy.

Last night’s episode, which aired right after the gleeful good nature of “Grease: Live,” made for a shock to the system for anyone switching channels. It opened with Paul Giamatti’s character, Chuck Rhoades, forcing a strolling man to pick up his dog’s excrement with his hands, after a speech with so much coiled violence he never needed to ball a fist. In just an hour’s time, Rhoades has confronted a man at his son’s little league baseball game and spent the rest of the show scheming to bring down Damian Lewis’ hedge-fund hero Bobby “Axe” Axelrod. Before the end of the episode. David Costabile’s character, Mike Wagner, has discussed his interest in sexually dominating women. Even the sex in the show is about power.

Axe is no better: He destroys the leadership of a company, partly because of his hatred of inherited wealth. He clearly did something nefarious around 9/11, but we don’t quite know what yet. His wife does, and Malin Akerman, who plays her, is as brutal and scheming as Claire Underwood. Like Axe, she wasn’t born into money, and she’s full of rage and resentment for those who were. When a 9/11 widow crosses her, she demolishes the chance for the widow's son to get into Stanford, humiliates her in front her of friends, and then passive-aggressively humiliates her in private.

“Billions” touches on the sacred, with the Sept. 11 attacks as a recurring bassline throughout. But most of the show is about the violence of upper-middle-class life: Walking dogs, college admissions, ripping off investors. The scariest thing of all is that this one is based on a real case: The campaign by the U.S. attorney Preet Bharara to nail Steven A. Cohen, the hedge-fund criminal. The lesson may be that Wall Street shenanigans are nastier than anything a zombie -- or Washington power couple -- can do.

Some critics have called “Billions” a Wall Street soap opera, and in some ways it is. But those shows had, alongside the blow-dried hair and power plays, a sense of romance around the edges. Love was real, even if it was hard to find and could lead you down dangerous avenues.

Here, we mostly get raw hatred, the corrupting influence of money, and class resentment. As we head into a race for president in which the Republican primary has already become a blood sport, it’s hard to avoid thinking: “Billions” may not be the best show on television, but it’s the one that tells us the most about where the country is now. This is 21st century America, not Westeros, and some of it is too close for comfort.