The "electability" argument is bogus: Why Bernie Sanders isn't the second coming of George McGovern

Establishment dems have for months warned that a Bernie nomination would be disaster. Here's why they're wrong 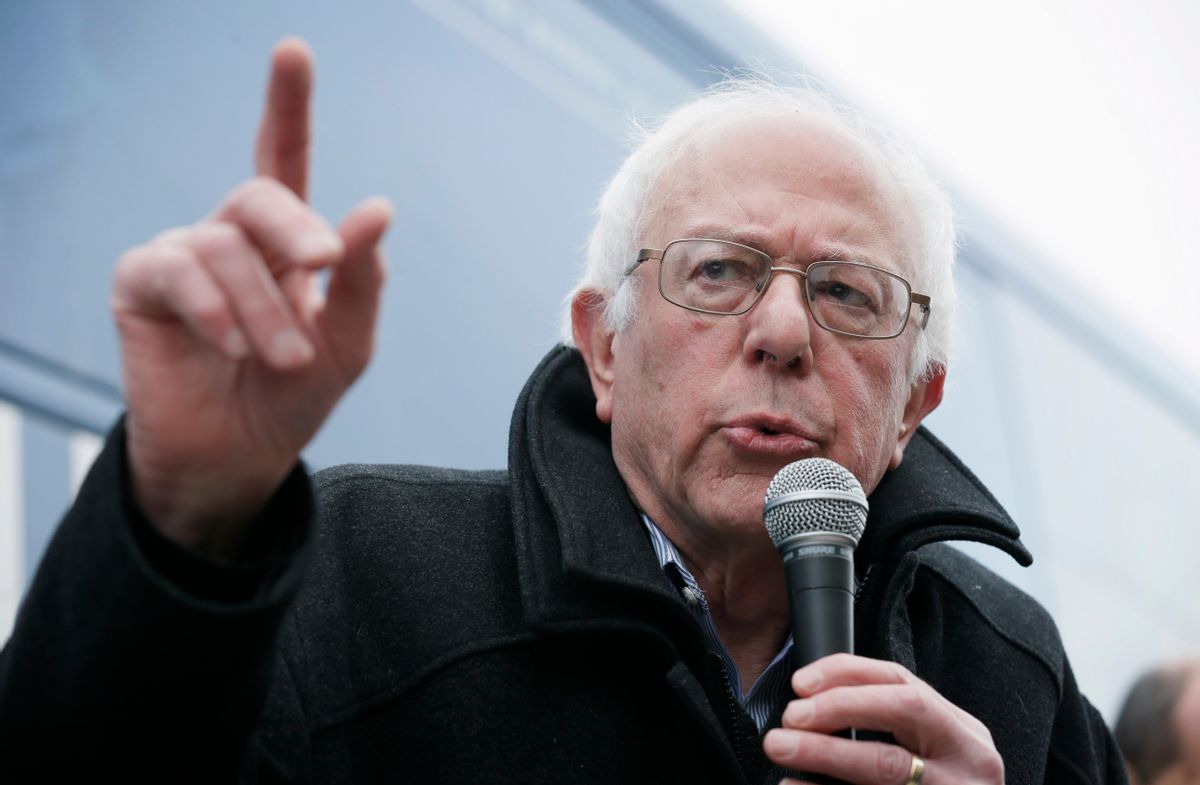 Bernie Sanders' rising fortunes have for months been sowing establishment alarm about his electability and its down-ticket implications. This includes a lot of pointed and unflattering comparisons to failed Democratic nominee George McGovern. As the Vermont senator has narrowed the gap with Hillary Clinton leading into today's Iowa caucuses, such warnings have reached a fever pitch.

The viewpoint is neatly encapsulated by columnist Eric Zorn:

“[H]is will be the fate of all movement candidates whose presidential bids are fueled by the passions of true believers — think Ron Paul, Ross Perot, Jesse Jackson, George Wallace, George McGovern, Ralph Nader and so on. He'll fall short. The only question is whether he'll fall short after a noble effort and some early successes in the nominating process, which begins with Monday's Iowa caucuses, or whether he'll make it to November and cause a clean sweep for Republicans.”

First, a look back at the relevant history: In 1972, Richard Nixon won every single state save for Massachusetts and a 23.2 point margin of the popular vote, crushing McGovern, the New Left-backed anti-war insurgent and inscribing what seemed like a clear message deep into the annals of conventional wisdom: Democrats lose with a left-wing candidate.

Similarities between McGovern and Sanders indeed abound. Like McGovern, Sanders is to the party establishment's left, a senator from a heavily-white and thinly-populated state drawing huge enthusiastic crowds, who is valued for plainspoken sincerity and passionate commitment to a single issue.

University at Albany political scientist Bruce Miroff says that this remarkably long list of family resemblances add up to precisely what the establishment fears: a losing Democratic nominee.

"Look, we've never had a successful radical be elected president," says Miroff, the author of "The Liberals' Moment: The McGovern Insurgency and the Identity Crisis of the Democratic Party." "I think historically that's something that Democrats would have to fear if Sanders were the nominee."

“The more Sanders is taken seriously,” he says, the more “that radical label, and that extremist label, would be relentless attached to him.” After all, “it was effective against McGovern,” a decorated World War II pilot who unlike Sanders was not a real-life socialist.

Miroff also notes that the stakes are higher today: In 1972, Democrats comfortably retained their long-running control over Congress. Today, ousting Republicans from the House seems like an impossibility in the short run, so losing the presidency would likely deliver Republicans full control of the government's three branches.

But Miroff acknowledges that today's political dynamics are far different than in 1972, when Nixon deployed his dirty tricks, a Democratic old guard fought to undermine their nominee, and white Democrats were being wooed en masse to the right. That's why I disagree with Miroff's conclusions. As historian Rick Perlstein put it in 2008, “McGovern lost within a context about as foreign to our current political debates as the French Revolution.”

The Democratic Party is today far more unified than it was in 1972, four years after a convention that witnessed police violence in the streets and chaos on the floor as New Left activists fought to dislodge the establishment. It was really, really bad. AFL-CIO head George Meany turned labor against McGovern, calling him “an apologist for the Communist world." Sore loser Democrat Hubert Humphrey, congratulating Nixon after his reelection, suggested that he had worked to defeat his own party's nominee. Today, party establishment figures like Ed Rendell might defect to support a third-party run by a neoliberal technocrat like Michael Bloomberg. But whereas in 1972 Democratic voters were deeply split, the Sanders' candidacy has exposed a new and different gap: the enormous abyss between party voters and officials. The vast majority of rank-and-file Clinton voters would likely back Sanders as the nominee. The same was not at all true of McGovern.

The Republican Party was very different as well. Nixon, who was fighting off George Wallace supporters and Reaganites to his right, “was relatively moderate compared to the Republican Party of today,” says Miroff, compared not only to extremists like Trump and Cruz but also to so-called establishment figures like Bush. Today, the two leading Republican candidates' extremism is a really big problem given the shifting demographic patterns beneficial to Democrats, which have helped the party win five of the last six popular votes.

There are also critical differences with regard to the shifting party coalitions.

In 1968 and 1972, Nixon pit white laborers against the image of black welfare layabouts, and rallied patriotic Americans against purported traitors advocating defeat in Vietnam. A generation of whites benefiting from New Deal programs had taken to the suburbs, creating new forms of segregation that shut black people into cities, and out from jobs and good schools; as the post-war economic engine began to stall, the liberal establishment that provided for white middle-class affluence became identified with a morally loose welfare state enabling counterculture weirdness, civil rights militancy, street crime and riots.

At the same time, the Vietnam War raged but Nixon cannily managed to put himself forward as the best candidate for peace, reducing American casualties while continuing heavy bombing and undercutting the moral imperative of the McGovern campaign. White supremacist George Wallace rallied legions of Democrats to his cause. McGovern rallied the New Left while Humphrey mobilized labor—much of the latter going to Nixon after McGovern won the nomination. After the 1972 convention, the AFL-CIO's Meany neatly encapsulated the state of open warfare between the party's two wings:

If you think that was bad, consider that an anonymous Democratic official warned journalists that “the people don’t know McGovern is for amnesty, abortion, and legalization of pot. Once Middle America–Catholic Middle America, in particular–finds this out, he’s dead.” That source, it turns out, was Thomas Eagleton, the man McGovern disastrously chose to be his running mate and then infamously pushed out to pasture after his troubled psychiatric history was revealed.

The New Deal coalition was fracturing and Nixon adroitly picked up the pieces. Today, things are quite different: Many of the hard hats that aren't rioting toward Donald Trump appear to be mobilizing around democratic socialist Bernie Sanders. Today's electorate is once again undergoing a big-time churn but in a totally new way. Sanders' campaign, as Matt Karp writes at Jacobin, has united working-class whites and young people while Clinton is attracting support from the affluent and voters of color. In 2008, Obama added overwhelming black and Latino support to the standard affluent and educated Dean/Bradley insurgent coalition, while Clinton held on to the white working class. Today, everything is scrambled.

For this reason, Sanders seems best poised to take on Trump's support among the sort of union-member, working class whites won to the right under Nixon and Reagan. Clinton's hold on a large majority of black voters poses a big problem for Sanders in the primary (though one that could very well diminish, given Clinton's slide in the polls and the growing number of high-profile black activists feeling the Bern). In the general election, however, either Democratic candidate would win overwhelming black support. What Sanders can likely do in a way that Clinton cannot is win over genuine swing voters, crafting a true Rainbow Coalition that for the first time includes white working class voters.

“The really big difference though, and I think this also helps Sanders, is that he is not the candidate of the counter culture,” emails Labor historian Jefferson Cowie. “He is the candidate of counter economics. And I think that makes him less vulnerable then McGovern. It was the three A’s—Amnesty, Acid, and Abortion that did him in more than his fuzzy economics.”

Cowie told Joan Walsh in 2012 that “the 1972 decision by organized labor…to destroy McGovern” constituted the key moment in the party's post-1960s crisis, “because that solidified a moment. He continued:

"It said, ‘We can’t work with the unions,’ to the left and to the women’s movement and the rest. It said organized labor is just about guys like George Meany, and Mayor Daley, it’s really the same monster, we can’t deal with them. And that creates a natural alliance between the New Left and the New Democrats, who were much more sympathetic to important issues of diversity than to labor."

The possibility of a left alliance between labor and the New Left was destroyed, and a new, business-friendly order emerged to rule the party, turning welfare reform and mass incarceration against black people with no other party to turn to and leaving white working class voters to Republican demagoguery and dog whistles.

“A young Bill and Hillary Clinton got their start on the McGovern campaign, and it’s hard not to see the impact of McGovern’s defeat on Clinton’s careful centrism and Democratic Leadership Council politics,” wrote Walsh. “The DLC was formed in direct reaction to Walter Mondale’s 1984 loss, which was even more lop-sided than McGovern’s. But it was designed to eradicate McGovernism from the party – to define Democrats as tough on crime and welfare, friendly to business, hawkish on defense – everything McGovern supposedly was not. It also involved the party running away from its proud New Deal legacy, and defining itself more as what it wasn’t than what it was.”

Today, uniting what was divided in 1972 could overthrow the Clintonite Democratic Party order and pit multi-racial left-wing populism against racially exclusionary right-wing populism in the general election. As Ian Haney-López and Heather McGhee argue at The Nation, Sanders needs to clearly attack racism not only in terms of the direct harms it has visited upon people of color but to make it clear that “politicians have used racial dog whistles to transmute white anxiety into support for conservative economic policies that have harmed us all.”

At the end of the day, it's impossible to predict how a general election would shake out. And I don't pretend to have the hubris to do so here. But seeking historical parallels to predict how a general election would play out is particularly unwise during an election cycle that has roundly shattered conventional wisdom about both parties' primaries and proven the pundit class wrong at every turn.

As Brian Beutler writes at The New Republic,

“nobody has yet made a convincing case that Sanders would be more likely to lose than win...if Sanders’s candidacy is genuinely reckless, his critics must be more persuasive than they have been on that point. Otherwise, the fact that the Sanders bloc is large and growing simply reflects ideological divisions within a party that is structurally favored to win the presidency anyhow. And if that’s the case, going all-in for a progressive champion might just be worth it.”

It's entirely revealing that the most powerful arguments in Clinton's favor hector liberals to be “realistic” rather than arguing that there is much appealing about her big business-and-bomb-friendly agenda. One argument is that Sanders would never get any of his legislation through a Republican Congress, ergo support Clinton. That one makes no sense because, as the Obama era has made clear, today's Republicans won't compromise with any Democratic administration. It is, however, fair to contend that a socialist would face a very difficult time in the general election. But the party elites and self-described serious centrists who often make this case—one that carries the strong implication that you should support the candidate they prefer—have not yet made it remotely clear that they are right.