The genius of "Infinite Jest": How David Foster Wallace's masterpiece saved the "big" novel — and why it's not "a thousand-page suicide note" 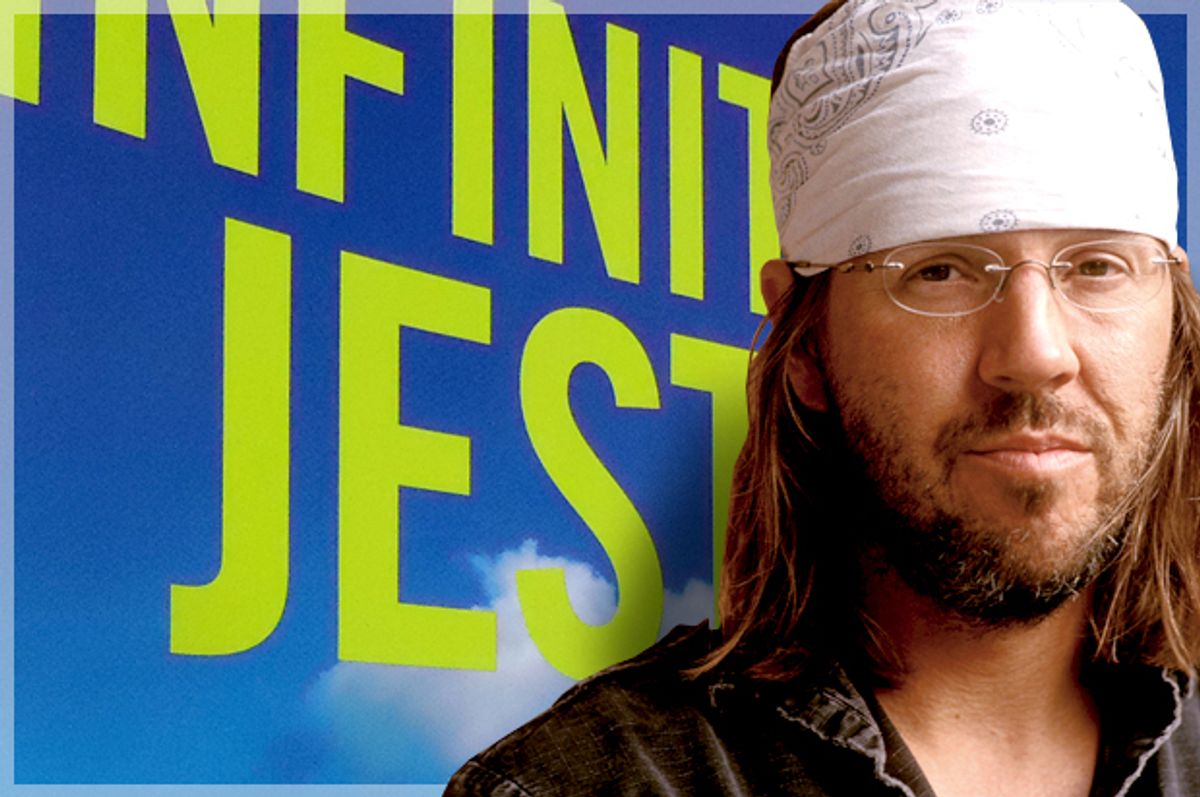 Nearly the size of a phone book, with dozens of pages of endnotes on subjects from Quebecois separatists to methadone clinics, the novel “Infinite Jest” landed 20 years ago today. An encyclopedic, oddly structured, grimly funny novel, it was met with both enthusiasm and frustration: Entertainment Weekly ran a piece despairing that it was impossible to finish.

The novel -- set in a hyper-commercialized near-future in which the years have been auctioned to corporate sponsors -- takes place mostly at a Massachusetts tennis academy and a nearby halfway house for recovering addicts.

Author David Foster Wallace became one of the most admired writers alive, but the melancholy that ran through the novel never left him: He killed himself in 2008. Wallace’s cult status grew among readers, even as some who’d known him pointed out that he could be a difficult person. (Mary Karr has said that Wallace was never “St. David.”)

Two decades later, how has “Infinite Jest” fared? And how do we read the novel now, eight year after Wallace’s tragic end?

Salon spoke to Samuel Cohen, who teaches literature at the University of Missouri and co-edited “The Legacy of David Foster Wallace.” The interview has been lightly edited for clarity.

It took Wallace nearly a decade to finish the novel. What was his life like in the years he was working on “Infinite Jest,” and what was his reputation like when it was released?

He had written a first novel, “The Broom of the System,” that hadn’t made the splash he had hoped. So he was teaching and trying to finish “Infinite Jest” for a long time; he had a great struggle with it.

He’d had personal and psychological problems along the way, I think.

I’ve made the argument that [those] can be related to the problems he was having with the writing of the book … A lot of it was about the problem of how to write: How to get free of his influences and write the way he wanted to.

The book is a kind of Oedipal struggle, then?

I don’t know if I’d say Oedipal. But in addition to trying to be different from the minimalists – I think of the book as a response to [Raymond] Carver-style writing – he’s also trying to get out from under Pynchon and DeLillo and the people who overshadowed him. If you read Hal as the Wallace figure, he’s trying to figure out how to be, how to move forward, how to create.

That’s actually what I love about this book: A lot of people are talking around this anniversary that it’s the greatest novel of the 20th century, or the greatest novel they’ve ever read. I think it’s a great novel, but it’s at least as great for the struggle it shows with its influences, and its characters' struggles with addiction, as it is for being a great success. [Its strength] actually comes from the way it’s struggling.

The book was heavily marketed when it came out: It was a new novel by a promising young novelist. How did readers and the press receive it in 1996?

Its landing was prepared for – there was a postcard pre-publication campaign, a lot of buzz created by  and everyone at [publisher Little, Brown.] So people were sort of primed to receive a book by a great young novelist who’d done an amazing thing. A lot of people agreed.

There was some skepticism about it: Some said, “That’s a little bit long for me.” Some found it self-indulgent. It’s a certain kind of sense of humor and way of thinking which I don’t think is for everyone.

Wallace was born in 1962, before the usual start-date for Generation X. But is it in some ways a quintessentially Gen X book?

That depends on your definition of Gen X, which demographer you agree with: A lot of them start it at 1960, which sort of slides him in there.

I think it’s very much a Gen X novel – I’m writing a book about that now, about Gen X and fiction. I think the feeling of trying to get free of the past, which you came to too late to be part of, and uncertainty of how to move into the future… Because for Gen X in a particular way, the future is an uncertain and scary thing – I think the book is all about that. Even down to the structure, the way it begins at the end. It’s all about how to get out of this historical rut.

In some ways it’s a very generational book, and that could work against its timelessness, whatever that means. But in other ways it’s a universal young person’s book. Length aside, it’ll be a “Catcher in the Rye” for the next however-many decades. In that it really just captures that trying-to-be-in-the-world feeling. What Wallace called “What it’s like to be a fucking human being,” if I recall.

At this point there’s a Wallace cult. At what point did that shape up, and what made it happen?

It quickly became the book to be seen on the subway reading. Which didn’t require reading it, really.

I know with his death I became aware of [the cult] being much more of a thing. I did a panel at the [Modern Language Association] in 2009, I think, with Michael Pietsch and other Wallace people, and the room was packed, it was standing room only. I had no idea it was going to be so much of a thing.

It’s impossible to think of Wallace and “Infinite Jest” at this point without thinking of his suicide. How does the book read differently now? Did the book give clues as to how its author might end up?

You can’t help but do it. I’m very wary of doing that to a novel – it doesn’t seem to be fair to it. But it’s so hard not to do with that book.

I think if you’re reading it carefully you see what it’s about without that big flashing light of his suicide. It does make it sadder, if you feel attached to the people who write the books that you love. But I don’t think it should be read as a thousand-page suicide note.

I think in some ways “The Pale King” is even more interesting to read in light of the sad thing that happened to him. It’s so explicitly about the need to stay in the moment, to keep your head down and work hard, to be patient and pay attention … And he was unable to do it in the end.

Has the book had a serious long-term influence on other writers, or was it a one-off, an anomaly?

I think there are other people trying to do it. He sparked a resurgence of people trying to do big, maximalist meta-fictional kinds of things. I think it’s hard to do. So I think the successful cases of influence are people who have incorporated a sense of fun – not the well-wrought-urn but the exploding gyroscope or whatever.

I think there are writers, contemporaries of his, who benefited from the challenge of it. I know Jonathan Lethem has talked about it, and Jonathan Franzen.

It raised the bar for the novel among his generation?

And made it more central. People were talking about the death of the novel all the time – that’s a little dramatic. But its cultural importance had waned a little bit. Over the last couple of decades, that has reversed somewhat.

So I think the novel is not the red-headed stepchild it was.