Hudgens stole the show on "Grease: Live," just a day after her dad's death -- because that's how grief works 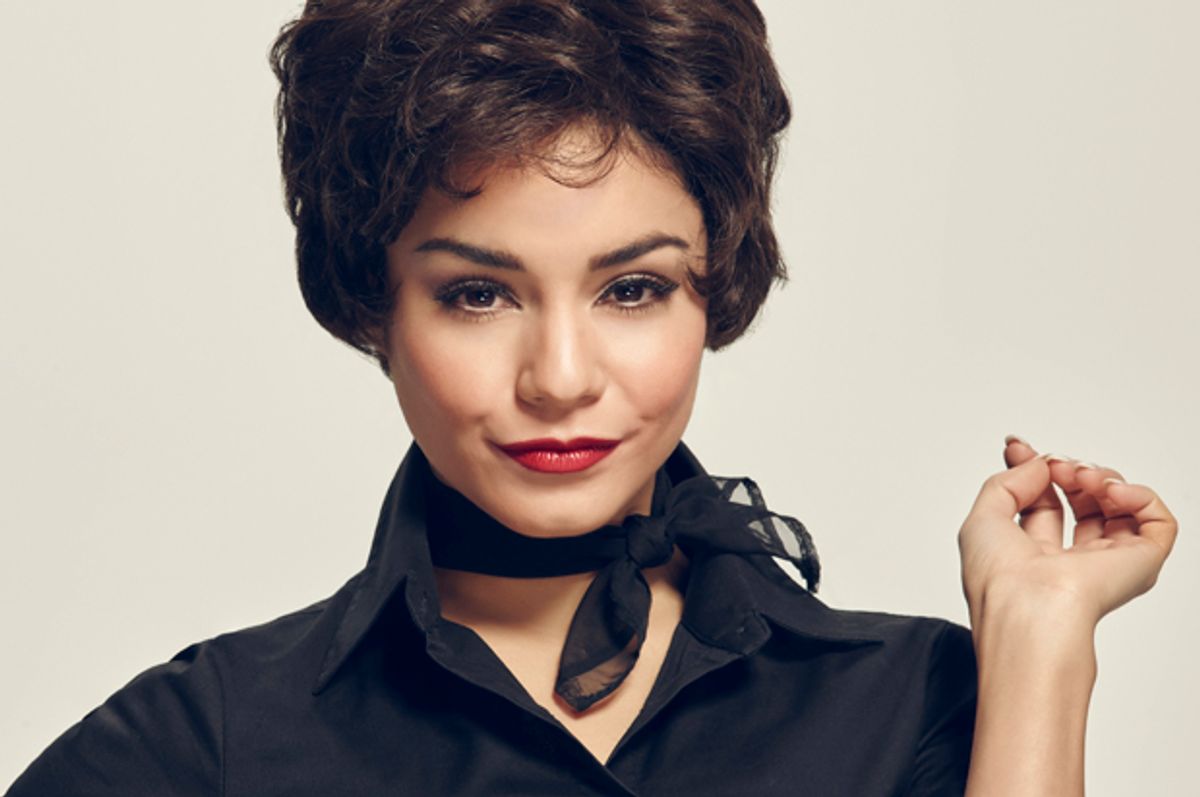 This is what it looks like when you've lost your father to Stage 4 cancer, not even 24 hours earlier. It looks like jumping on a bed in pajamas, belting out show tunes.

On Sunday morning, Vanessa Hudgens tweeted out an announcement, just hours ahead of her performance as the iconic Rizzo in Fox's live staging of "Grease." She wrote, "I am so sad to say that last night my daddy, Greg passed away from stage 4 cancer. Thank you to everyone who kept him in your prayers." And she added, "Tonight, I do the show in his honor."

Just a short time later, she was tweeting, "TONIGHT'S THE NIGHT!!!!!! YOU DON'T WANT TO MISS THIS! Tune in 7/6c on FOX," tips on "The Beauty Trend That Can Accidentally Ruin Your Eyebrows," and a quiz on "Which Pink Lady would be your bestie?" Moments into the broadcast, she posted a clip of herself and her fellow Pink Ladies, singing the film's original theme song with Jessie J and smiling brightly. And over the next three hours, she strutted, she flirted, she flounced to "Look At Me, I'm Sandra Dee" and she torched to "There Are Worse Things I Could Do." She left it all on the proverbial floor, from the opening number through the end credits, which offered an "In loving memory of Greg Hudgens, June 22, 1950 - January 30, 2016."

Writing in Billboard Sunday evening, Joe Lynch and Erin Strecker praised Hudgens as "the live musical's MVP -- an even more impressive feat since she was pushing through the recent, tragic loss of her father to deliver one of the funniest, most nuanced performances of the show." The New York Times' Neil Genzlinger declared that she "deserves some kind of prize for gutting through Rizzo," while Deadline's verdict was that she "stole the show." And on social media, her peers, like Ashley Tisdale, who wrote, "I wouldn't expect anything less @VanessaHudgens is killing it! So proud of my girl," were equally wowed.

How did she manage to pull it off? How did she not, as one might expect — and totally understand if she had — simply call for a postponement and immediately take to grieving in private? The answer is likely a combination of elements. For starters, Hudgens, who first rose to fame a decade ago in "High School Musical," is a talented, hard working pro who clearly adheres to the entertainer's "show must go on" creed. But there's perhaps something else, too. Perhaps it's simply that going on is what we do. And that it's often somehow easier when the loss is fresh than when the true absence kicks in.

In 2010, Lily Rabe got right back to work as Portia in the Broadway production of "The Merchant of Venice," one day after her mother, Jill Clayburgh, died of leukemia. Last year, Facebook COO Sheryl Sandberg opted not to take a leave of absence but return to work 10 days after her husband, David Goldberg, died suddenly during a vacation. At the time, re/code noted Sandberg's family, and that she'd chosen to get back to work "on advice from child psychologists who suggested that kids often benefit by trying to get back to typical routines quickly." Last June, Vice President Joe Biden grieved for his late son Beau, but he also enthusiastically celebrated marriage equality. And Celine Dion, who lost both her husband and brother mere days apart last month, has already announced her return to her current singing gig in Las Vegas later in February.

Grief doesn't confine itself to the space immediately following the event. It also doesn't, by the way, move in neat, linear stages. It zigzags all over the place. It punts you instantly back into your routines and obligations and at times makes you feel grateful they are there to distract you. And then, long after the casseroles have stopped appearing at your doorstep, it randomly kicks you in the stomach when you hear a snippet of a song or smell the whiff of a remembered fragrance. As writer and fellow widow Lindsay Nicholson wrote for the Telegraph last year after Sandberg's loss, "There is a welcome relief in thinking about something other than your almost unbearable loss." Sometimes the best work is wrung out of the worst shock. And Hudgens' fierce, show-stopping performance on Sunday likely wasn't something that she pulled together in spite of her grief — instead, it looked for all the world like it was informed by it.