Female music journalists, fans and musicians themselves deal with these false and stupid assumptions all the time 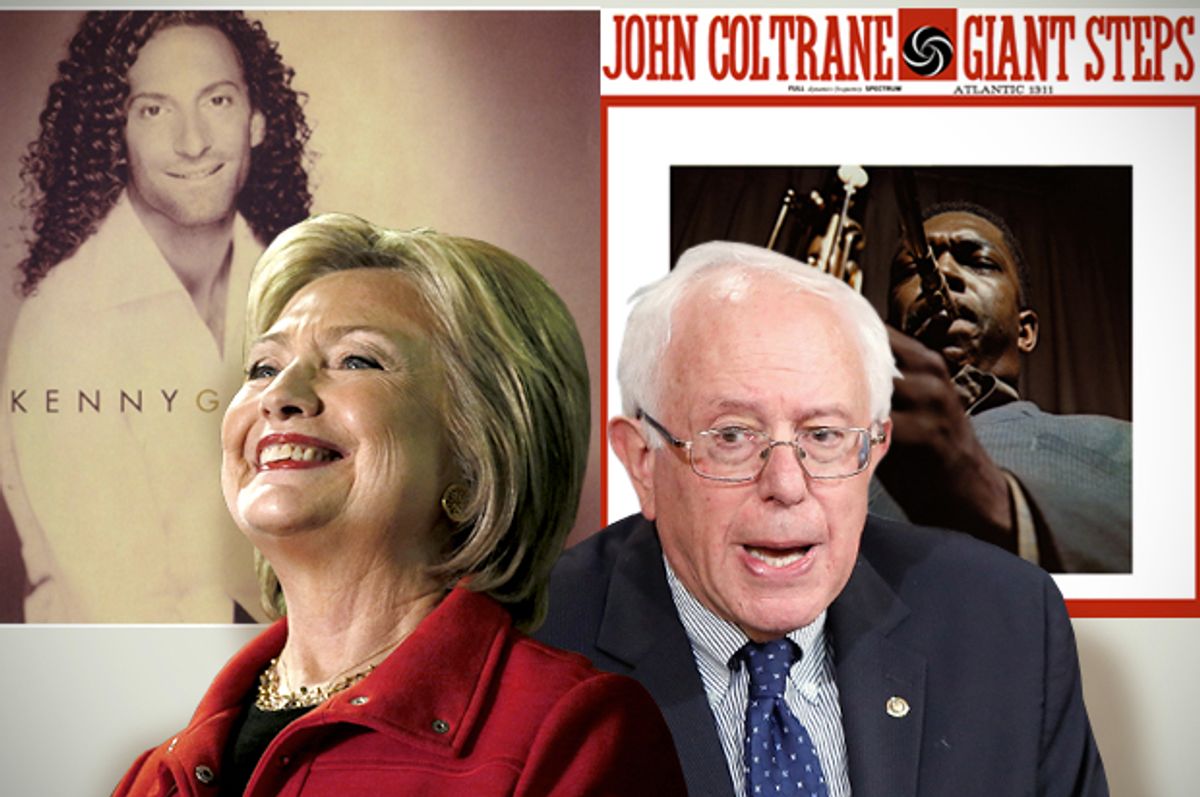 In the week leading up to the Iowa caucus, the internet was abuzz with a Bernie Sanders/Hillary Clinton meme that highlighted the pair's ideological differences. Although the poster-like graphic was mocked up to look official—from the patriotic blue background to the tagline, "Be informed. Compare them on the issues that matter"—it employed decidedly non-political matters (e.g., wolves, sleeping, caves, jetskis, Pokémon) to demonstrate their opposing viewpoints. The obvious goal was to play up Sanders' perceived complexity and contrast it with Clinton's supposed #basic nature, in order to illustrate why the former was a better, hipper candidate.

Translated to internet humor: Compared to Sanders, Clinton isn't as evolved in her tastes and approaches. And so graphics popped up which imagined what the candidates might say about Olive Garden (Sanders: "Only when I'm high." Clinton: "An authentic Italian restaurant for the whole family") or lizards (Sanders: "[covered in lizards] 'Hell yeah! I love these little guys!'" Clinton: "No"). The meme's absurdity wasn't quite as successful (or humorous) once it ventured into pop culture territory, however: Clinton was portrayed as being oblivious to the nuances of "Star Wars," anime and "Harry Potter," as well as a philistine when it comes to jazz ("It's not Christmas until I put on Kenny G's Christmas album"), Iggy Azalea, industrial music ("Marilyn Manson, Rob Zombie, the list could go on"), Radiohead ("I love 'Creep'") and the Grateful Dead ("I like 'Touch of Grey'").

Radiohead and the Dead have zero to do with the election or candidate platforms, which of course is the point—it's all speculative humor meant for social media virality and a Facebook chuckle or two. Still, the meme's subtext has uncomfortable parallels to the authenticity wars that continue to rage in rock circles, the idea that certain acts and genres are more real because they don't employ an army of songwriters or laptops. It's also reminiscent of the indie-vs.-mainstream music dichotomy of the '80s and '90s—when the idea of "selling out" and going overground was often anathema—and the negative perceptions around the concept of a "casual fan": Liking only the big single or a band's surface output is often considered hopelessly uncool.

These jabs at Clinton's imagined sonic preferences reinforce the tired idea that the tastes of non-cis-male cultural consumers—from teenagers on through boomers and beyond—are something to be mocked and disrespected. It's seen in the way the term "fangirl" has become a term of derision directed at supporters of any band with an adolescent fanbase—everyone from My Chemical Romance and Fall Out Boy to One Direction and 5 Seconds Of Summer—or the way having the musical taste of a "soccer mom" is worthy of an eyeroll. Women of all ages have their favorite artists or genres mansplained to them online every day, when they're not having their expert opinions or reviews viewed with condescension. See: Jessica Hopper noting a dude asking her, "So you making sketches?" as she took notes while reviewing a Lorde show for Rolling Stone.

And then there's the ongoing pressure for women to appear young, or at least be relatable to a youthful demographic. After all, it's likely no accident Clinton's official Spotify playlist received a modern, hit-based refresh to appeal to millennial constituents—even though the music in her iPod hewed toward classic rock back in 2008—and that she's aligned herself with Katy Perry. It's all symptomatic of the ingrained daily sexism faced by women in music. As has been covered numerous times, this bias is pervasive and ingrained; it's not just fans and journalists on the receiving end of disrespect and misogyny. In mid-January, Dirty Projectors member Amber Coffman accused music publicist Heathcliff Berru of sexual harassment—a revelation that led to multiple other women coming forward with their own tales of Berru assaulting or harassing them.

In a new issue of Lena Dunham's newsletter, Lenny, Best Coast's Bethany Cosentino spoke out about her own experience: "When I saw [Amber's] tweets, I knew I had to speak up, because Heathcliff has sexually harassed me too. I had never shared my story publicly because I was afraid of the backlash that I might receive or that I would come across like some kind of wrathful bitch." Cosentino went on to write an impassioned, powerful essay calling for an end to the double standards rampant in the music industry: "People need to stop calling women 'bitches' because they’re strong and empowered. People need to stop calling me a 'slut' for my public support of Planned Parenthood, an organization that has saved my life as well as many other men’s and women’s lives. People need to stop calling me a 'whiny baby' because I write songs about heartache and my feelings. Did anyone call The Beatles 'whiny babies' for singing the lyrics 'This boy wants you back again'?"

At another juncture, Cosentino posed the question, "Why has it become acceptable for 'criticism' to take the form of abusive online commentary or vulgar, inappropriate heckling?" It's a good question, because she's absolutely right. And nowhere is this more obvious (and pernicious) than the 2016 election season, where the name-calling and malicious tone from all political sides feel like a giant, country-wide game of "Lord Of The Flies," where everyone's an enemy and an "other" to be mocked and shamed. And so naturally a Sanders vs. Clinton meme portrays the latter as dimwitted, because mean-spirited characterizations not based in reality are the dominant form of discourse.

But portraying Clinton as ignorant and clueless is infuriating because it's indicative of another ugly subtext of the 2016 election season: that a strong, intelligent woman needs to be put in her place simply because she exists. Women shouldn't feel compelled to support Clinton simply out of solidarity, of course. However, disagreements with her policies and platforms also shouldn't immediately devolve into personal attacks or digs at her smarts. Constantly reducing Clinton to a robotic caricature or a reductive meme underscores the pervasive, persistent sense that women are second-class citizens whose opinions simply don't matter.