How Alexander Chee wrote "The Queen of the Night": "'Buffy' reruns daily. The need to watch all of 'Six Feet Under' in a week. So much Internet" 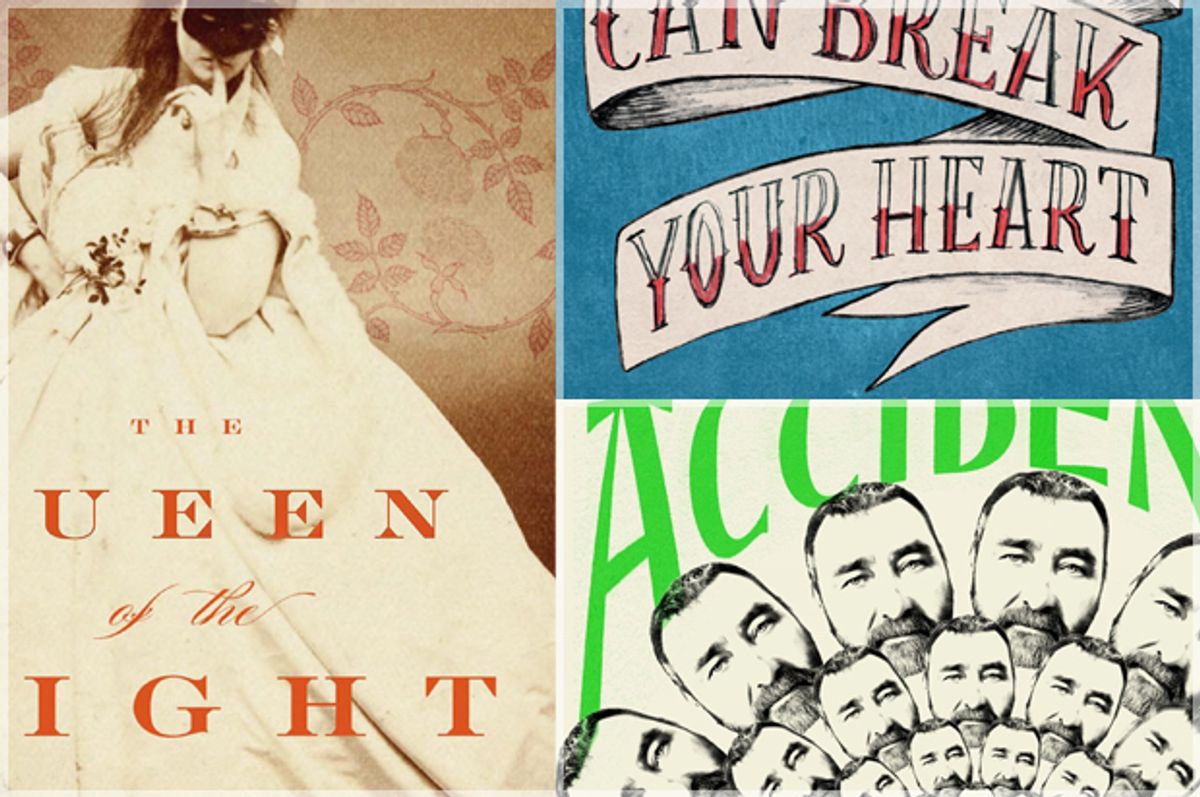 For February, I posed a series of questions — with, as always, a few verbal restrictions — to five authors with new books: Alexander Chee ("The Queen of the Night"), Sara Majka ("Cities I’ve Never Lived In"), Belinda McKeon ("Tender"), Ed Tarkington ("Only Love Can Break Your Heart") and John Wray ("The Lost Time Accidents").

MCKEON: Love, obsession and internalized prejudice, and what a dangerous cocktail those three are. Also: friendship, sexuality, art, the grimness and fun of 1990s Dublin, and the line “What happens in the heart simply happens,” from Ted Hughes’s "Birthday Letters."

CHEE: Fate and free will, sex, war, love, money, spies, and a lot of dresses. And, sometimes, some really gigantic hair.

TARKINGTON: It’s sort of a mash-up of Cain and Abel, the Prodigal Son, The Graduate, To Kill a Mockingbird, Helter Skelter, and “A Rose for Emily,” set in the small-town Upper South of the late ‘70s and early ‘80s, with a soundtrack by Neil Young and Joni Mitchell.

TARKINGTON: When I was nine years old, I saw my father cry for the first time, on the night my half-sister attempted suicide—as I later learned, for the third time. Everything in the book flows from the powerful impact of that night, the revelations of the ensuing years, and the discovery that love can be as troubling and terrifying as it is wonderful.

MCKEON: The memory of being young and overwhelmed in Dublin; it’s burned into my soul. Nan Goldin’s The Ballad of Sexual Dependency; even just the name of it. The songs from Radiohead’s OK Computer. The beautiful song “Sea Creatures” by the young Northern Irish singer-songwriter Soak, which assured me that in the aching-ground of the heart, things don't much change. The photography of Wolfgang Tillmans and Zoe Strauss. Andy Warhol’s Silver Clouds. Angela Chase and Rickie Vasquez.

MAJKA: I was influenced mostly by places: the mysteries of coastal Maine, the anonymity of New York, and then Provincetown bars, out-of-season.

CHEE: Dance battles, standing splits, Chopin's habit of playing well only in private. Verdi's long marriage but also his affairs. Joan Didion and Oscar Wilde both saying that what you write in your fiction comes true. And a night when I ran away from what I loved and ran into it instead.

WRAY: Relativity, '60s pulp sci fi, gothic romances, the Marx Brothers (Harpo especially), Bellow's concept of 'serious fun', something Haruki Murakami once said to me that I might have misinterpreted, the Legendary Stardust Cowboy, a film about David Bowie from the '70's entitled Cracked Actor, black hole research.

TARKINGTON: A double life: teacher, coach, dad, and husband by day, novelist in pre-dawn darkness. Early morning coffee and a few hours alone each day with my imaginary friends.

CHEE: Los Angeles, Rochester, Amherst, New York. "Buffy" reruns daily. The need to watch all of "Six Feet Under" in a week. Halo, Jade Empire, Ninja Gaiden Black. So much Internet. A capitalist death machine called "America" with people burning their furniture for heat and living in their cars, taking pharmaceuticals with or without prescriptions. A country that had become someplace I would never have agreed to move to and yet still love.

MAJKA: Divorce, trying to make ends meet, really poor, really a struggle, a lot of odd jobs, a bit at loose ends, dated men much younger than me, younger than my sister who I helped take care of as a baby, therapy, didn’t like to be at home at night, went to a lot of experimental music shows, that seems strange to me now, moved to New York City, worked to pull my life together.

MCKEON: They can say what they want. That’s the deal.

MAJKA: I would be a major league baseball player. I wouldn’t even have to be that good—just good enough to sit in the dugout and joke around. I was an athlete growing up, and I hated that it was physically painful, but loved being a part of a team. Baseball seems to solve that quandary.

TARKINGTON: I’m not comfortable yet accepting that I have any particular strengths; every sentence still terrifies me. I do have confidence in my ability, with a bit of distance, to see the errors in my writing—especially the places where I’m saying things I needed to know at the time but which are ultimately superfluous. I’d like to be better at everything, but my first wish would be a greater control over my impulse to summarize and explain.

WRAY: Tone is my strong suit. I'd like to be better at writing from a woman's perspective. But I'm working on it.

CHEE: I think I do well at metaphor. I would like to be better at the description of faces.

MCKEON: I’m good (I think) at dialogue, and there’s a certain state I can get into, after long immersion, when the rhythm of a piece just begins to unfold on the page without my having to do anything. I’d like to be better at structure, though I also think it’s intuitive and there’s not much I can do (apart from reading) to develop that.

MAJKA: Perhaps I’m good at a sense of place and mood, of creating characters that feel real, of making quick movements. I’m trying not to disparage myself by saying I need to be better at everything else... I really wish I was better at writing longer. Everything gets shorter.

CHEE: Like anyone, I wait to be punished. And I keep writing.

MAJKA: I think I had that hubris when I was younger and it would probably serve me well to have it back. It’s helpful as a writer. What life events makes one lose hubris, makes one lose that kind of belief—that’s interesting to me. Why is it gone? What happened?

MCKEON: Contend with it? I have good Irish genes: one-third gossiping monster, one-third paranoiac weepfest, one-third narcissistic personality disorder. It’s not hubris if you sprinkle it on your breakfast cereal, is it?

TARKINGTON: To begin with: I believe that almost everyone has something of interest to say about the world. For most of us, success in writing is much less about talent or vision than about dogged persistence. And I know for a fact that there are many, many worthwhile stories out there that will never be picked up by an agent or a traditional publisher, simply because there isn’t enough room in the marketplace. So I approach my identity as a published novelist with a far greater measure of humility and gratitude than of vanity. Furthermore, in the years since I began working seriously at writing fiction, something remarkable happened: the daily practice of writing and reading as a writer became both an unbreakable habit and a kind of religious practice. Exercising my imagination, thinking about people and meditating on their desires and their problems, wrestling with language, reading diverse voices and learning both from their techniques and their unique perspectives—these are the rituals that sustain me and enlarge my capacity for all of the human qualities to which I aspire. Having my work published and read is a dream come true, but if it hadn’t happened, I’d still be writing—and reading—every day.

WRAY: Why, that's for all you puny mortals to contend with—not the mighty ZARGG. <<MEGALOMANIACAL LAUGHTER>>