Iowa makes it a 3-person race for GOP: Cruz pulls out the upset, but Trump and Rubio have reason for optimism

Trump should feel good about his standing despite Cruz taking state. But watch out for revitalized Rubio 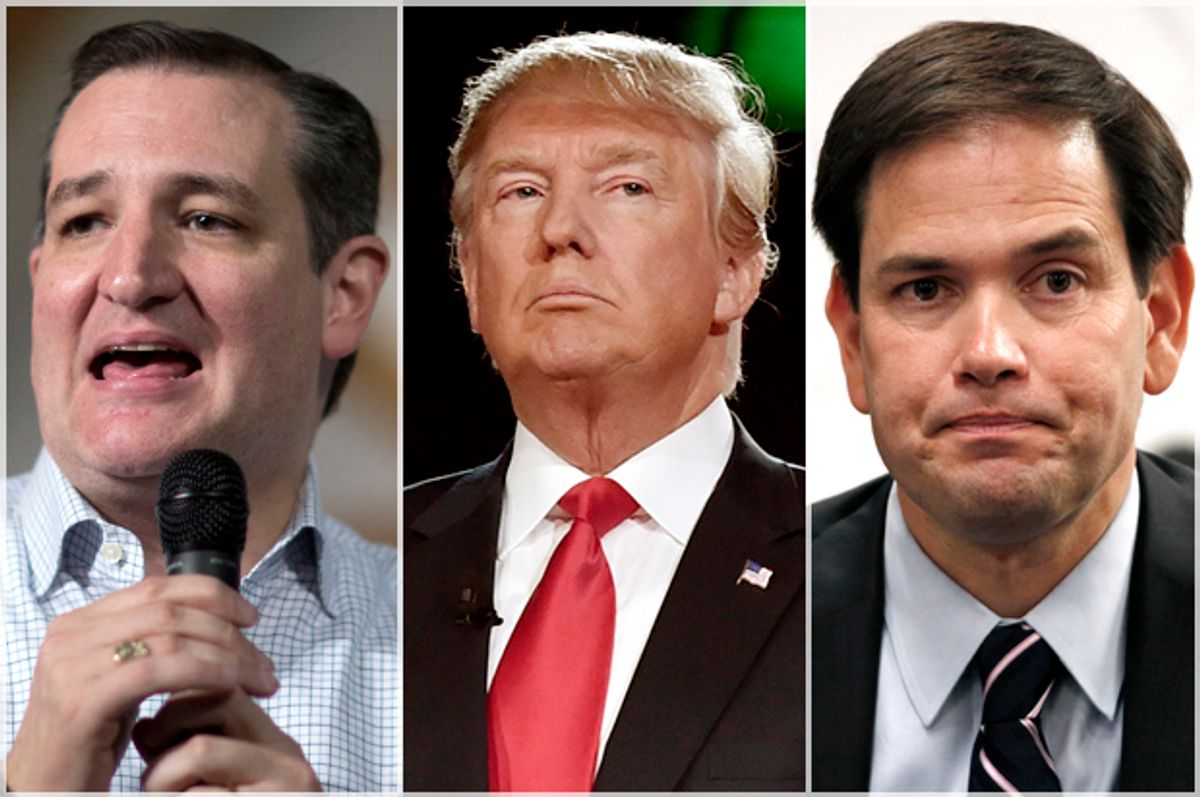 Twitter is enjoying Donald Trump's loss of the Iowa Republican caucus to Ted Cruz, but, if you're working for the Trump campaign, there is really no reason to sweat Monday night's results. The real story of the night is that there's no real change in the way things looked from the day before. It's still a three-way split, with Trump having a slight edge. Cruz and Marco Rubio, however, are well-positioned to grab the nomination from the man who really should have never had a shot in the first place.

The fact is that the Iowa caucus has very little predictive power when it comes to the eventual Republican nominee. Instead, the state has a history of crowning go-nowhere candidates that make the Bible-thumpers feel good, but who eventually lose, on the grounds of unelectability, later in the Republican primary. The last two winners of the Iowa caucus were, after all, Rick Santorum and Mike Huckabee.

While Trump's big ego might be hurt by not being the "winner" he perceives himself as, his campaign should actually feel good about Monday's results. He came extremely close to Cruz in a state dominated by evangelical voters, showing that he has a shocking ability to pull voters who should, by all accounts, dislike this thrice-married former pro-choicer. Once the primary moves on to states where there's more of a split between the hardline Christian vote and people who say they're Christian but are more moved by secular concerns, he should do better. Trump has every reason to believe hanging in will work out for him.

Don't count Cruz out, however. As the results in Iowa show, he has lasting power with the evangelical vote. Right now, he's splitting that with the other Bible-wavers in the contest, but that won't last long. Mike Huckabee dropped out Monday night, and now we're looking at the imminent demise of the Ben Carson campaign.

While the campaign denies that Carson is out, they did admit that he's going home to Florida instead of turning immediately to New Hampshire. "It’s not like he’s going home, he’s stopping back for 12 hours," campaign spokesperson Mike Nason told The New York Times. "He’s getting a change of clothes." But the winding-down tone of the campaign, including Carson asking "was it worth it" during his evening's speech, suggests that the end is nigh.

This is big for the Cruz campaign. While Trump has been polling higher with self-declared evangelicals than expected, the results of the Iowa caucus suggest that, when the rubber hits the road, the organized evangelical movement is still going to want someone who knows better than to put money on a communion plate. Carson's base of support has always been the sort of people who know his name from Christian bookstores, and they are likely to be more drawn to Cruz's more Bible-centric campaign than Trump's. Winning Iowa may not mean much, but Huckabee and Carson have about 10 points between them, and it would not be surprising to see those voters decamp to Cruz.

Cruz has a real chance now to push hard on this, as well. As Michelle Goldberg wrote in Slate, a Trump win would signal to the religious right that they really are losing influence. Cruz is well-positioned to make a deal with evangelical leaders, many of whom are already supporting him: Help push him over Trump, and he will make the case to the larger party that the religious right is still the most important force in the Republican Party.

The other big story is Marco Rubio's performance. It's easy to scoff because he came in third, but between the Iowa's history of failing to predict the eventual nominee and Rubio's better-than-expected performance, the blunt fact of the matter is that this outcome means Rubio's still in this.

To be blunt, the argument against Trump has long been that voters will flirt with him right up until they reach the polls where many of them will be suddenly gripped by the realization that they are about to vote for Donald Trump, they'll panic, and they'll vote for the safe choice that might actually beat the Democrat, widely believed to be Rubio. Rubio's recent surge in the Iowa polls supports this argument, but his final numbers were even higher than the polls predicted. RealClearPolitics had Rubio at 17 percent, but he ended up with 23 percent of the vote, a not-insignificant 6 percentage points over what the polls would have predicted. Not mind-blowing, but suggests that there are indeed a number of Republicans who are getting cold feet at the last minute and choosing a reliable candidate like Rubio over the exciting but unpredictable Trump.

Rubio spun it as an outright win, too, gloating about how "they" said he couldn't do it, and yet here he is. You would think he's won it, he came out so strong in his victory-style post-caucus speech.

Rubio's not wrong to be confident, as other candidates that are a bit more establishment — or at least seem like they have some kind of selling point to the portion of America that isn't a screaming right-wing nut – are probably going to fold soon, handing their base of support to him.  Jeb Bush, of course had a pathetic showing.  falling behind even silly vanity candidates like Rand Paul and Ben Carson to get a whopping 6th place. It won't be long before he gives up humiliating himself at debates and instead joins his father and brother in the pleasures of retirement.

Similar candidates who feel less crazy, and therefore, more electable — Carly Fiorina, Chris Christie, even Rand Paul — may have tiny voting bases, but as they drop out, Rubio will probably pick them up. It's a nickel-and-dime campaign, but it could work, especially if Trump and Cruz get in a shootout that damages both of them.

Looking over the Iowa caucus, it's hard not to see it as a three-way split between the religious right, the Republican establishment and the populist vote. Unfortunately for both the Republicans and, frankly, the rest of the nation, there's no reason to think that three-way tie is going to get resolved anytime soon. It might be a long primary season, folks.