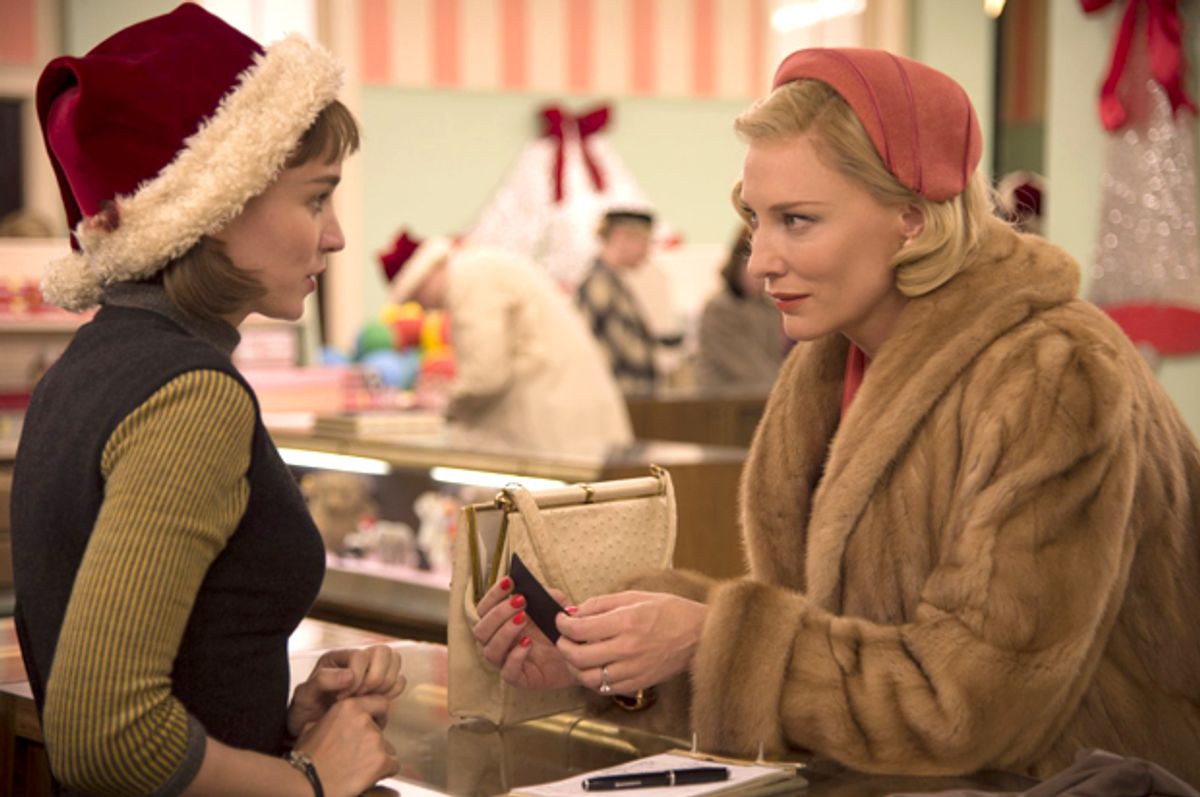 Cate Blanchett and Rooney Mara in "Carol" (The Weinstein Company)
--

The Vikanderssance is upon us.

After winning best supporting actress prizes at the Critics Choice Awards and the Screen Actors Guild awards, Swedish actress Alicia Vikander looks poised to repeat on Oscar night for her performance in “The Danish Girl.” (Note: Due to category confusion, she was placed in lead at the Globes, where she lost to Brie Larson for “Room.”) The 28-year-old plays Gerda Wegener, the wife of trans painter Lili Elbe (cisgender actor Eddie Redmayne), the first person to ever undergo gender confirmation surgery in the 1930s.

Between her acclaimed roles in “Ex Machina,” “Testament of Youth” and “The Man From U.N.C.L.E.,” Vikander had quite a 2015, and she isn’t slowing down any time soon. This year, Vikander will be featured in the fifth entry in the Bourne franchise (featuring Matt Damon’s return to the action series) and Derek Cianfrance’s “The Light Between Oceans,” co-starring her current beau, Irish actor Michael Fassbender.

But what’s notable about Vikander’s awards dominance is that this wasn’t supposed to be her Oscar year. After winning the best actress prize at Cannes, Rooney Mara (“Carol”) was poised to sweep the season (in the supporting actress category, at least). As recently as a few weeks ago, Mara was considered the front-runner in the race on Oscar predictor websites like Gurus of Gold and Gold Derby. On Jan. 11, just three days before this year’s Academy Awards nominations were announced, pundits favored Rooney Mara in the supporting actress race by 11 points.

Of course, something unusual happened that morning: Mara’s film was left out of the best picture category, while her director (Todd Haynes) was omitted from best director consideration. It seems that Rooney Mara may follow by being passed over on Oscar night. While Mara’s altered fortunes might be seen as a result of her film’s shocking snub (thus, losing momentum in the face), the actress’s falling star is more likely indicative of the academy’s male-centric politics.

In the past 25 years of the best supporting actress category, a surprising pattern emerges among winners. Everyone knows the old myth that pregnant women win supporting trophies (see: Catherine Zeta-Jones, Rachel Weisz), but there’s a much simpler trick to winning a trophy: Get cast opposite a man.

Since Whoopi Goldberg won her first Oscar for “Ghost” in 1990, 19 best supporting actress winners took home a trophy for supporting a male lead. These include Rachel Weisz in “The Constant Gardener” (playing Ralph Fiennes’ romantic interest) and Mira Sorvino for “Mighty Aphrodite” (paired up with Woody Allen). Only six winners—Anna Paquin, Angelina Jolie, Catherine Zeta-Jones, Renée Zellweger, Mo’nique, and Octavia Spencer—won for performances where their chief screen partner was a woman.

Two examples, however, require further examination. Rebecca Hall and Scarlett Johansson play the title characters in Woody Allen’s “Vicky Cristina Barcelona,” but Penelope Cruz trades a majority of her lines with Javier Bardem, who plays her husband. You could argue Beyoncé is the lead in “Dreamgirls,” but Jamie Foxx gets top billing on the movie’s poster, as well as IMDb.

In these cases, ownership of the narrative is implicit—and somewhat debatable. Hey, maybe you think Jimmy “Thunder” Early is the secret protagonist of “Dreamgirls.” (I’d be willing to hear it.) Most of the time, however, the fact that these are men’s movies is so obvious that it’s on the box. Examples include “Shakespeare in Love,” “Pollock,” “Michael Clayton” and even “Boyhood”—which makes it clear that the film isn’t about Patricia Arquette’s journey. The title refers to her son.

Why does sharing the screen with a man mean Oscar gold? It’s not just because there are simply more roles available to women who might be the only prominent female character in the film (see: Marisa Tomei, Kim Basinger), but because the academy gives men’s stories more weight. If an actress’s performance is in service of a man’s story, it’s more likely to be taken seriously. After all, not a single one of last year’s best picture nominees boasted a female lead.

But as Autostraddle’s Heather Hogan explains, “Carol” poses a challenge to that system, precisely because it dismisses its male characters at every turn. They are depicted as “bumbling, fumbling, entitled” oafs who stand in the way of its central couple’s blossoming queer happiness. After Therese (Rooney Mara) abandons her clueless ex (played by Jake Lacy, cinema’s Baxter-in-residence) to run off with Carol (Cate Blanchett), her older paramour asks if Therese regrets it. “No, I haven’t thought about him all day!” she exclaims with ecstasy.

“The joke’s on Richard, and men everywhere who feel entitled to a world that revolves around their whims,” Hogan writes. “Unfortunately, encouraging women to forget men isn’t a great strategy when you’re trying to convince an organization historically dominated by masculinity to acknowledge your genius.” According to Hogan, numerous men have even walked out of the screening she’s attended.

If Hogan suggests that the “end of men” ethos in “Carol” led to the film being all but ignored by an Academy Awards voting body that’s 76 percent male and predominantly over 60, Mara’s performance is unlikely to fare any better with the same group—despite being one of the most critically lauded of the year.

After all, Alicia Vikander’s performance (on top of being very good) is the exact type of thing the academy loves: a long-suffering wife who sacrifices everything for her partner. These roles have been a favorite of the Oscars for years—from Jennifer Connelly’s award-winning turn in “A Beautiful Mind” to Felicity Jones’ best actress nomination last year as Jane Hawking in “The Theory of Everything.”

But while no one can say the incredibly talented Vikander didn’t work her ass off for it, there’s a reason that she wasn’t nominated for her far, far superior performance in “Ex Machina.” Alex Garland’s film is a boldly feminist sci-fi thriller in which a female sex robot (Vikander) turns on her chauvinistic creator (Oscar Isaac of “The Force Awakens), who created her to be expendable. Vikander’s amazing performance got nods at the Golden Globes and BAFTAs, but the Oscars favored her more conventional role.

The message is fairly clear. The academy doesn’t like movies that challenge the patriarchy—or that suggest queer women can fall in love all on their own, thank you, without needing a man to validate the importance of their story. Love might conquer all, but clearly it’s no match for the academy.