Ted Cruz's radical supporters: He won Iowa on the back of the scariest Bible-thumpers in the business 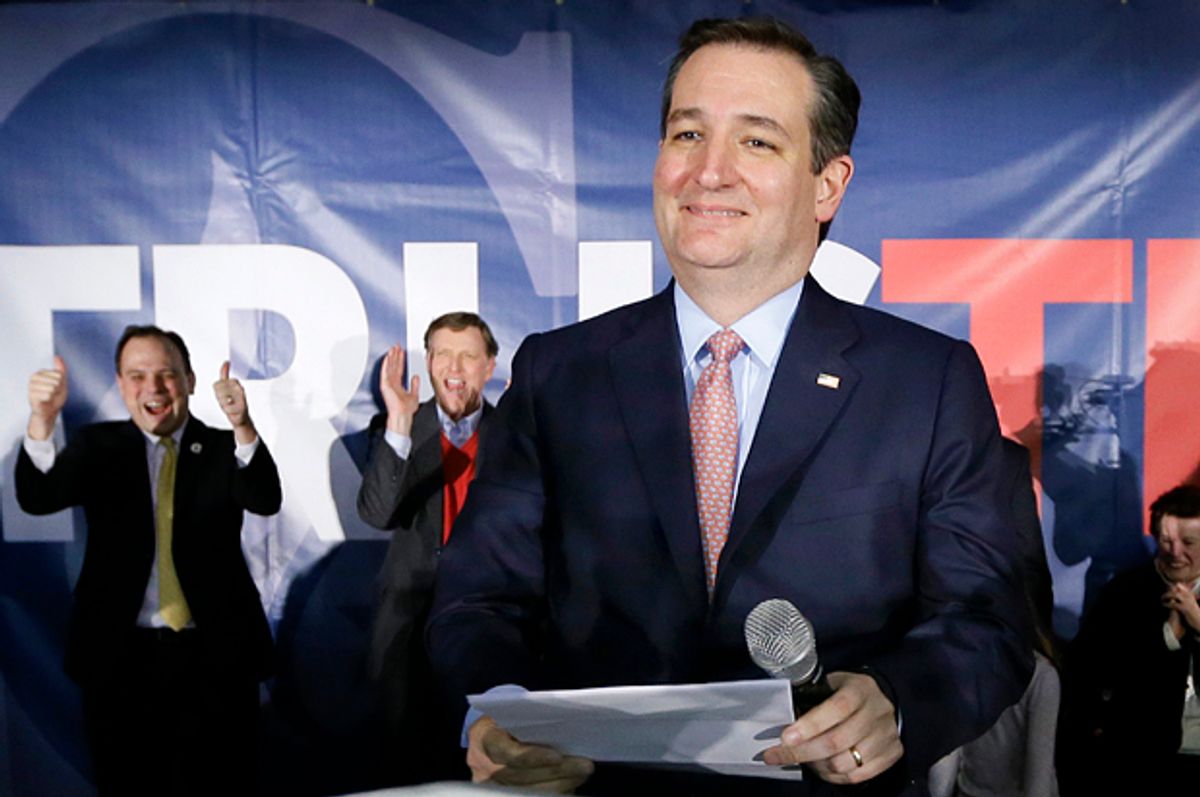 Ted Cruz's victory in Iowa doesn't mean he'll get the nomination — history shows the Republican caucus in that state is a poor predictor of eventual outcome — but for the religious right, especially the most skin-crawlingly creepy folks in the religious right, Cruz's edging Donald Trump out at the polls represents a huge victory. Because Monday night meant that while their influence might seem to be on the decline, the religious right proved, once again, that they are still a powerful force on the right. Unfortunately, the Republican Party will still have to pay tribute to the nasty crews that use Jesus as a cover to push their lifelong obsession with controlling other people's sex lives, especially if those people are female or queer.

A lot of attention has been paid to Trump's oversized ego, but Cruz's may be even worse. While Trump likes to portray himself as a "winner," Cruz clawed his way to victory in Iowa by implying — well, more than implying — that he's a religious messiah, a prophet who is the next best thing to the second coming of Jesus. While denouncing Barack Obama for his supposed "messiah complex," Cruz has been suggesting that he is the real deal, and that he will win because "the body of Christ" will "rise up to pull us back from the abyss."

Cruz has been portraying his campaign, in fact, as a religious war in which the true believers will assert themselves as the rightful rulers of this nation. "Strap on the full armor of God, get ready for the attacks that are coming," he told supporters, who are treated more like believers, at a campaign stop in Iowa.

Cruz's father, Rafael Cruz, has gone even further in suggesting that his son is quite literally God's emissary sent to turn America into a Christian nation (which tends to be defined as a nation that keeps heavy tabs on what you're doing with your genitals, instead of one that makes sure there's enough loaves and fishes for everyone). In an interview on Glenn Beck's show, the senior Cruz and Beck both pushed this notion that Cruz is a prophetic figure come to save us all.

"Everybody was born for a reason," Beck told Rafael Cruz, while sitting in — no joke — a replica of the Oval Office built for his show. "As I learned your story and saw the fruit of that story, now in your son, I am more and more convinced in the hand of divine providence."

"Oh, absolutely," Cruz replied. Who doesn't want to be the father of the messiah? The last one was literally God himself, after all.

This Jesus-walks act of Ted Cruz's worked like a charm, as Cruz sucked up a veritable rogue's gallery of every creepy straight guy who claims he loves Jesus but has his eyes fixed firmly on the crotches of America. As Cruz noted in his victory speech Monday night, Bob Vander Plaats and Rep. Steve King are national co-chairs for his campaign. King, of course, is a notoriously loony right wing nut who has argued that legalizing same-sex marriage means people will now marry lawnmowers and has equated undocumented immigration with the Holocaust.

Vander Plaats, who heads up Iowa's religious right behemoth, the Family Leader , has argued that his interpretation of "God's law" should trump the actual laws of our country, that gay marriage will lead to parents marrying their children, and that Vladimir Putin was right to sign a law criminalizing those who speak out for gay rights.

Right before the caucus, Cruz launched "Pro-Lifers for Cruz," a group that is also a magnet for the most radical elements of the Christian right. It's chaired by Tony Perkins of the Family Research Council, a group that is so virulently anti-gay that the Southern Poverty Law Center (SPLC) has declared it a hate group.

Troy Newman, the head of Operation Rescue, is on the board as well. Newman is beyond a radical anti-choicer, a man who believe that abortion doctors should be executed and women who abort pregnancies, which is about 30 percent of American women by age 45, should be jailed for murder. Newman's single-minded obsession with abortion has led him to blame everything from the California drought to HIV to 9/11 on the fact that we have legal abortion.

Cruz also enjoys the support of David Barton, a powerful crank who rose in the ranks of the religious right by feeding the masses totally false but pleasing stories about American history, designed to create the illusion that our country was basically formed as a theocracy. Barton's willingness to lie and deceive on behalf of this claim is truly breath-taking, as the SPLC demonstrates:

Another Barton whopper is his repeated claim that John Adams supported religious control of the U.S. government. To make that point, Barton quoted the following Adams passage: “There is no authority, civil or religious — there can be no legitimate government — but what is administered by this Holy Ghost. There can be no salvation without it — all without it is rebellion and perdition or, in more orthodox words, damnation.” But Barton conveniently omits the next part of the quote, in which Adams makes it crystal clear he is mocking those with this belief.

Barton loves to do things like claim the Bible forbids progressive income taxes or the capital gains tax, or that Jesus forbade the minimum wage. Which we should care about because, in his opinion, what he thinks Jesus said should be treated as law, since he rejects out of hand the facts and history (and the First Amendment's clear meaning) that show this is a secular nation.

And so on and so forth. Cruz has been rolling out a dizzying array of endorsements of the absolute worst of the religious right, which was enough to help push him over the top in Iowa.

None of this means that Cruz will be the eventual nominee. But, as history shows, campaigns like his — and like Mike Huckabee's and Rick Santorum's in the past — show that the fire-breathing fundies have a lot of political power. This, in turn, means that the Republican Party will still feel obliged to pay fealty to  those who believe that it's the government's solemn, Jesus-instructed duty to punish you for having sex outside of their very narrow prescription of what it should look like (straight, married, only for procreation).

If there was one good thing to come out of Trump's candidacy, it was that his apparent pull with evangelical voters suggested that the single-minded obsession with the underpants of America was finally starting to fade on the right. But the fact that Iowa voters, who are heavily evangelical, broke at the last minute to support the guy who is supported by the sex police shows that we are not quite done with these lunatics. Which is something they'll be happy to remind party leaders of, even if Cruz eventually loses the nomination.