The pro-Rubio spin is the result of largely bogus expectations, while some downplay Bernie's achievement 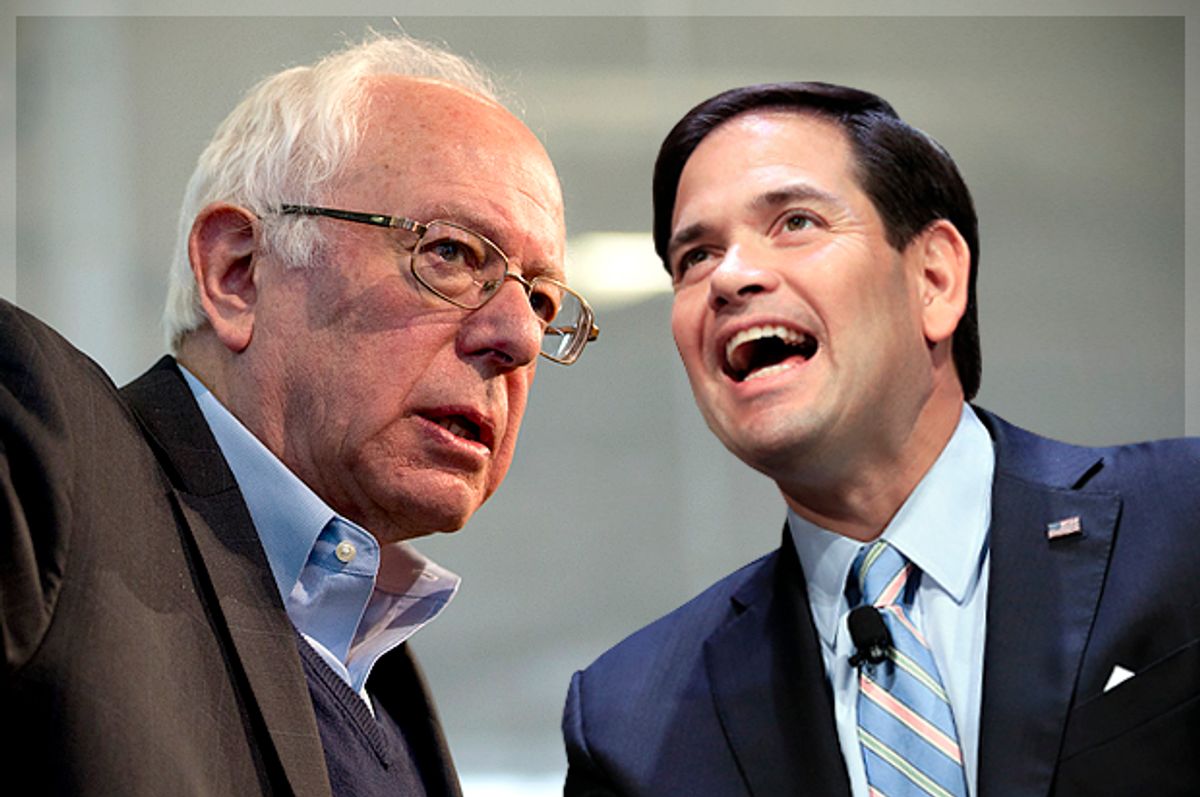 There's a curious contrast in the way the Republican and Democratic caucuses in Iowa are being interpreted, both before and after Monday night. Everyone in the media plays the expectations game one way or the other – myself included. “Horse race” journalism is an unfortunate but unavoidable reality in this business. But the ways in which expectations are set and used to frame narratives are often arbitrary.

The post-Iowa coverage this year is an interesting example. On the Republican side, Marco Rubio has been declared the big winner in Iowa, despite finishing in third place (which is exactly where he's been in the Iowa polls for weeks). But why? Third place is hardly impressive, particularly with hucksters like Cruz and Trump finishing first and second.

The pro-Rubio spin is the result of largely bogus expectations heading into Iowa, most of which originated with Rubio's campaign. A Politico report from two days explains what happened:

“Somehow, against all evidence, Rubio has successfully spun that he's gunning only for third place here [Iowa]. In sharp contrast, Cruz's campaign, touting its superior ground game, has openly pined for and predicted victory. The result: In the closing hours before Monday's caucuses, Iowa is suddenly fraught with risk for Cruz while Rubio, who sits comfortably in third in most public and private polling, is almost guaranteed to meet or beat diminished expectations.”

So Rubio is winner not because he won but because he convinced the media he didn't want to. Rubio's story is that he's really running against Bush and Christie and Kasich, not the two actual front-runners in the race. Rubio is smart to play this game, but he's only able to declare victory insofar as the media accepts the benchmark he set. And that's the problem.

Cruz won the Iowa caucuses, and he did it with an enormous ground operation that generated a record turnout. And yet because he “blew the expectations game,” Cruz is basically an afterthought. Similarly, Trump is seen as a loser even though he came in second and finished within the margin of error. And he pulled this off in a state where, as I noted yesterday, his campaign strategy was least likely to succeed. Trump's obsession with “winning” is partly to blame for this, but it also has to do with commentators embracing false narratives about the race. Trump is still leading in practically all of the upcoming primary states, and Monday's result in no way diminishes that.

The expectations game seems not to matter as much on the Democratic side, however. Hillary Clinton won in Iowa by the narrowest of margins, and she deserves credit for that, but the fact that Sanders kept it as close as he did is remarkable. Even reasonable and evenhanded pieces like Peter Weber's at The Week still downplay what Sanders accomplished in Iowa.

As Ezra Klein argued, Sanders' virtual tie ought to be the leading story of the Iowa caucuses:

“A tie for Bernie Sanders is a genuinely remarkable achievement...In 2008, Barack Obama beat Clinton in Iowa. His campaign was powered by liberal anger over the war in Iraq – anger Clinton was on the wrong side of – as well as real institutional support from the Democratic Party. Sanders had much less to work with in terms of issue differences or Democratic Party fissures, and was facing Clinton in a year she was much stronger.”

If Rubio was a “winner” Monday night, Sanders was the star. There's no question the electoral map still favors Clinton, but Sanders began with no money and no name recognition and nearly upset the machine that is Team Clinton. Indeed, the race was sufficiently close that a coin toss was needed to award the final delegates. Given the expectations, Sanders' performance in Iowa was as impressive as any in recent memory. And if Sanders pretended winning wasn't a priority Monday night, as Rubio did, the narrative today would be different.