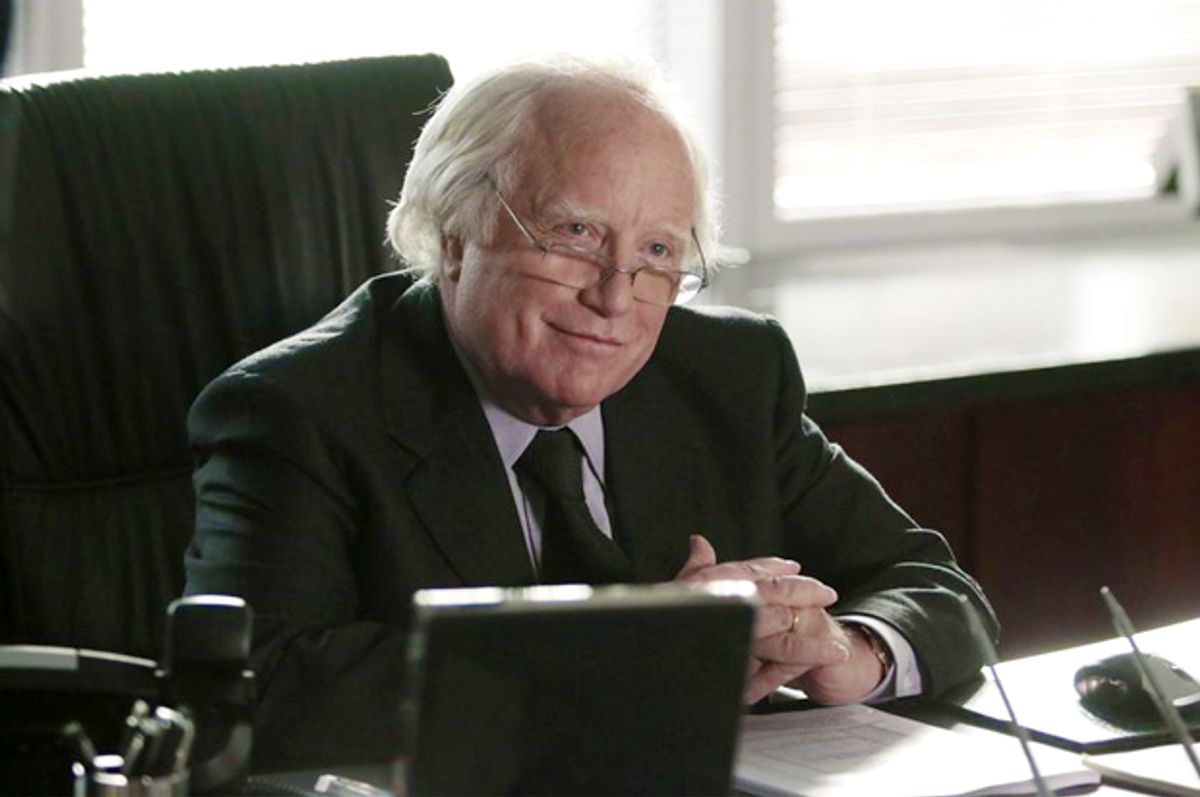 In an era of outrage about the 2008 financial crisis—and that crisis’ larger implications about the institutional irresponsibility of Wall Street—“Madoff” is a miss, quite unable to measure up either on the outrage/explanation quotient (“The Big Short,” “Too Big to Fail”) or the reveling in billions quotient (“Billions,” naturally, as well as “Wolf of Wall Street”). As a piece of history, the miniseries is hard to follow and a bit too sordid; as a piece of fiction, “Madoff” feels rushed-off and incomplete. The ABC miniseries, airing in totality over two nights — tonight and tomorrow — stars Richard Dreyfuss as über-villain Bernie Madoff, a con-man who engineered the biggest Ponzi scheme in history, valued an estimated $65 billion.

The real-life results of Madoff’s scam were the subject of regular coverage in the news: Life savings eradicated, fortunes that disappeared overnight, and suicides, including Madoff’s own son, Mark. Madoff was dealing in billions, but he was not some kind of Robin Hood figure; investors in his “fund” included union pension funds, charities, and universities. The financial crisis of 2008 triggered several investors to pull out their holdings, and as a result, Madoff became a symbol of Wall Street greed, despite operating outside of financial system.

As a character study, Madoff is a seductive quarry, and “Madoff” wants to tell the story of this inexplicably selfish man from his own point-of-view. Madoff built his fortune through trust, and swindled or lied to both far-off investors and those closest to him, including his wife, brother, and two sons. The Madoff family was Jewish, and held that identity proudly and seriously. But that also meant that Bernie Madoff’s victims were culled from the Jewish community. And running through the men in the Madoff family is a propensity for cancer—“the poisoned heirloom,” Dreyfuss’ Madoff calls it in the miniseries. Andrew Madoff—the Madoff son that didn’t kill himself—died from it in 2014, after successfully battling it to remission in 2003. Andrew Madoff told People in 2013: “One way to think of this is the scandal and everything that happened killed my brother very quickly… And it's killing me slowly.”

There’s a lot there—a psychological profile that would have Dr. Jennifer Melfi rolling up her sleeves. But though Dreyfuss is inspired in the role, teasing apart what makes Bernie Madoff tick proves too difficult of a task for the miniseries. “Madoff” has Dreyfuss directly address the camera and voiceover through certain scenes in order to reveal Madoff’s internal workings, but though this is often compelling, it’s an unreliable narrative. The miniseries depicts Madoff obsessively checking his luxury watches and suffering from possibly psychosomatic back pain as the scheme begins to crumble—but Madoff himself is unable to articulate what’s happening to him. That’s reasonable—that a sociopath would be self-delusional—but it’s not that useful for the audience.

Furthermore, the miniseries only begins to use timestamps and location placeholders towards the very end of the four hours, and even then, sporadically, meaning that I, for one, was constantly unmoored. It was only in the third hour that I realized about a decade had transpired in the timeline of the miniseries, with more yet to go. Certain complexities, as a result, are just skipped until they’re found useful to be deployed—like Mark (Tom Lipinski)’s kids, or Andrew (Danny Deferrari)’s relationship with a woman Bernie Madoff derisively dismisses as a “shiksa goddess.”

What does work about “Madoff,” counter-intuitively, is that it feels like a splashy “Behind The Music” piece. There are a few elements where the miniseries’ trashy TV-movie roots are allowed to shine—such as the introduction of certain Madoff conspirators with cutaways that allow each to give the camera a sinister, lip-curling glare as the camera arcs around them. Madoff himself is cartoonishly evil, narrating to himself with all the glee of a Bond villain explaining his evil plan, practically rubbing his hands together like a parody of Scrooge McDuck, all set to dive in his vault of money. Blythe Danner plays Madoff’s beleaguered and/or clueless wife Ruth at a pitch somewhere between drunk housewife and fairy princess, which ends up striking the perfect note of tragedy as the series goes on. Erin Cummins plays assistant Eleanor Squillari with an overwrought New York accent and heavy makeup. And mafia-movie and “The Sopranos” veteran Michael Rispoli plays to type as Frank DiPascali, Bernie’s right-hand man in the criminal enterprise. His office is always filled with smoke, and apparently has no windows; he lords over a dark lair of secrecy, walls lined with files. He speaks to “Madoff”’s true aspirations. This is a miniseries that wants to be a horror movie.