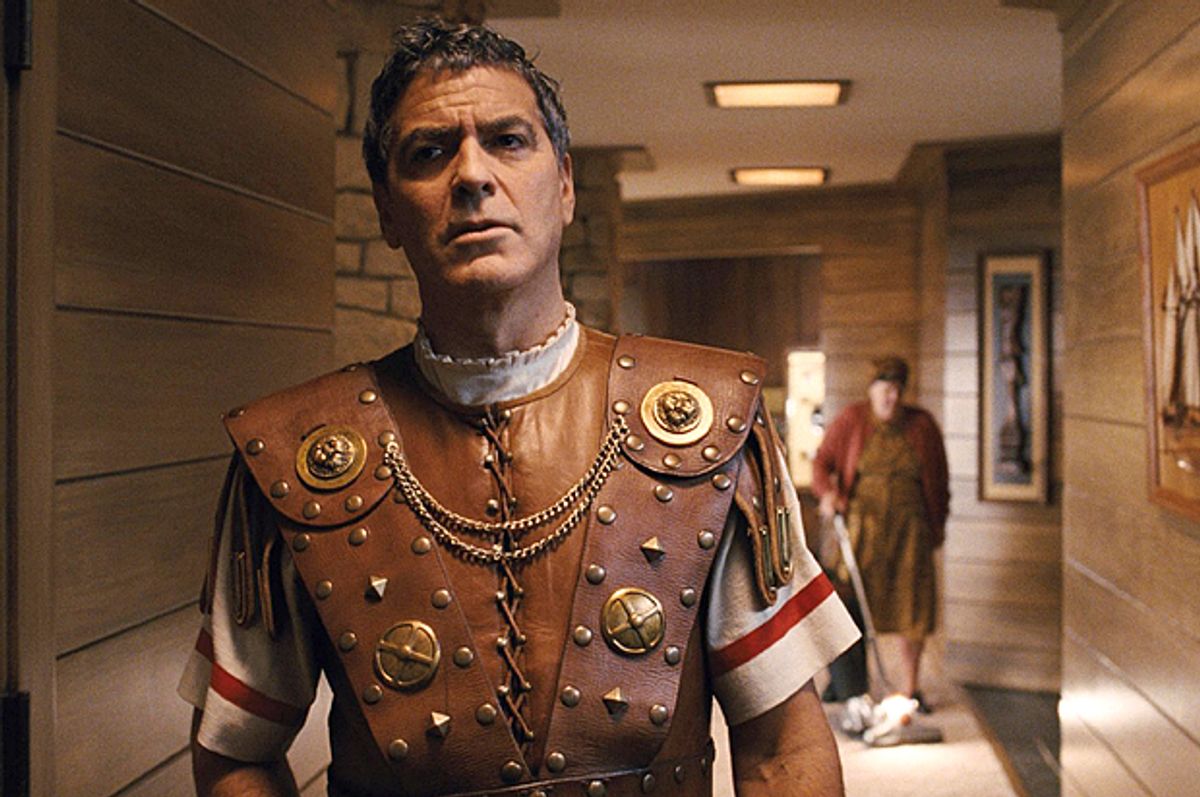 There’s already some tendency to pitch “Hail, Caesar!” as a Coen brothers movie made in the duo’s “lighter,” more welcoming and more Hollywood-friendly mode. That’s true up to a point, and that characterization suits the needs of Universal Pictures, which has positioned this star-packed midwinter comedy as a box-office bonanza. But there’s much more to “Hail, Caesar!” than a period showbiz farce in the Mel Brooks school, although I’d be willing to bet that Joel and Ethan Coen have obsessively absorbed Brooks’ movies and method. Underneath the laff-riot and the Hollywood satire, “Hail, Caesar!” is a curiously delicate film built on profound affection for American movies and the illusions they build, and loaded with in-jokes the mainstream audience will grasp incompletely or not at all.

Sure, some of “Hail, Caesar!” is not subtle in the least. It features George Clooney as a manly movie star of the early 1950s named Baird Whitlock, who plays the lead in a deadly sword-and-sandal epic set in the time of Jesus. (Yeah, it’s called “Hail, Caesar!” The subtitle is “A Story of the Christ.”) Baird is one of those postwar actors who became huge by doing exactly what he was told and is now almost forgotten; he isn’t anyone specific from Hollywood history but he’s a little bit Kirk Douglas (except worse), a little bit Victor Mature (except better) and a little bit John Wayne (except not as much of a dick). But don’t assume this is a “Clooney movie”: Baird is not a hero, a villain or even a buffoon, and remains pretty much a cipher throughout the film. It takes him quite a while to figure out that he’s been kidnapped, let alone why or by whom.

Clooney in fact plays the MacGuffin in this movie, to use Hitchcock’s terminology; he’s a plot device around whom the main characters revolve. With considerably less screen time than Clooney, Channing Tatum actually makes a stronger impression, playing a charismatic, faintly metrosexual song-and-dance man in the Gene Kelly vein, who has a secret that goes much deeper than the obvious secret everyone knows about. Tatum’s show-stopping production number, with a chorus of sailors in a waterfront bar (yes, the “nautical musical” was a thing, as in “Anchors Aweigh” and “Crest of the Wave,” both Kelly vehicles), begins as camp or kitsch and almost immediately pushes past that, until it’s simply flat-out awesome. That’s the level on which “Hail, Caesar!” transcends the slapdash Mel Brooks tradition; if the Coens decide to shoot five minutes of a nautical musical, they’re gonna make damn sure it’s the best nautical musical anybody’s ever seen.

Go beyond those two big names, and the movie gets better still. Since we’re exploring the "Jeopardy" category of “forgotten movie genres of the ‘50s,” Alden Ehrenreich, a supremely talented 26-year-old actor who’s been waiting for his big break — you might have seen him in “Stoker” or “Beautiful Creatures,” but probably not — plays an irresistible “singing cowboy” star named Hobie Doyle. The Coens pull off the same trick with Hobie as with the tap-dancing sailors: At first he seems like an ignorant rube with an Okie accent, who has been hopelessly miscast in a Lubitsch-style sex farce directed by a foppish European called Laurence Laurentz (Ralph Fiennes, coming as close to playing Lord Voldemort again as he ever will). But that too gets turned upside down: Hobie is both sincere and talented, and his musical “Lazy Ol’ Moon” looks a lot more fun than Laurentz’s third-rate imitation of Oscar Wilde or Noel Coward.

And I haven’t even gotten to Eddie Mannix, the strangely heroic and self-sacrificing studio executive played by Josh Brolin. Amid all the more obvious levels of inversion and subversion and satire at work in “Hail, Caesar!” Eddie may be the most extraordinary of all. Has any movie about Hollywood, ever, depicted a studio boss as a selfless and idealistic figure, and explicitly compared him to Jesus Christ? Only the Coens, I suspect, could come up with such a peculiar and brilliant counter-narrative.

If you think I’m kidding about the Christ part, or if you suspect the Coens would only employ a devout Catholic protagonist as an object of scorn and derision, well, I’m totally not and they actually wouldn’t. Not because the Jewish brothers from St. Louis Park, Minnesota (setting of “A Serious Man,” their most autobiographical and most Jewish film), are all that interested in Roman Catholic faith as such. But it presents an intriguing narrative challenge, and mockery is way too easy. The first shot of the film (if I remember correctly) is the image of Christ on the cross, above the altar where Eddie makes confession — every single day. Even Eddie’s priest tells him that it’s way too often and that his sins barely register, and that’s about as snarky as the movie gets on that issue.

Baird Whitlock’s mysterious disappearance from the set of “Hail, Caesar!” — at first attributed to a daylong bender, or a “chippie” in some hotel room — is the biggest problem Eddie faces on the soundstages and back lot of Capitol Pictures. But not the only one. Laurentz despises Hobie; the Esther Williams-style water ballet star played by Scarlett Johansson (really just a cameo) is having a baby with no visible dad; the twin Hedda Hopper-style gossip columnists played by Tilda Swinton have gotten their fangs into an ancient Baird Whitlock scandal about how he got the leading role in a notorious picture called “On Wings of Eagles.” (Whose title, when uttered aloud, is always accompanied by a distant cawing sound.) And Eddie himself is being courted for a lucrative job in the aircraft industry. As the recruiter for Lockheed observes, reasonably enough: “What’s gonna happen to the pictures when everybody buys a television set?”

I’m not super religious when it comes to spoilers (or when it comes to religion), but it wouldn’t be fair to tell you much about Baird’s kidnapping or what it’s all about. Except — I can’t help myself! — that Herbert Marcuse is involved, and that I believe he is the only real-world individual to be named and portrayed in this movie. If you’re already laughing about that you’re in good shape, but if you don’t know who that is it totally does not matter. (On the other hand, if you’re warming up your blogging fingers for an irate diatribe about how this movie’s portrayal of Hollywood leftism is scurrilous, neo-McCarthyite slander, you’re on your own.) “Hail, Caesar!” is the only movie anyone will ever make that features both Marcuse and Saul of Tarsus as characters, along with a scene that perfectly captures the look and feeling of late Stalinist Soviet propaganda films. Apparently Dolph Lundgren plays a submarine captain, though I’m not going to tell you where he comes in or how, and I didn’t know that until I read through the credits. Dolph Lundgren, uncredited, at the helm of the Red October. This movie is exactly that great.