Let's stop talking to our kids: I know communication between parents and children is important, but can we also learn to occasionally shut up?

Growing up, silence meant anger. I vowed to do things differently with my own daughter, but have I gone too far? 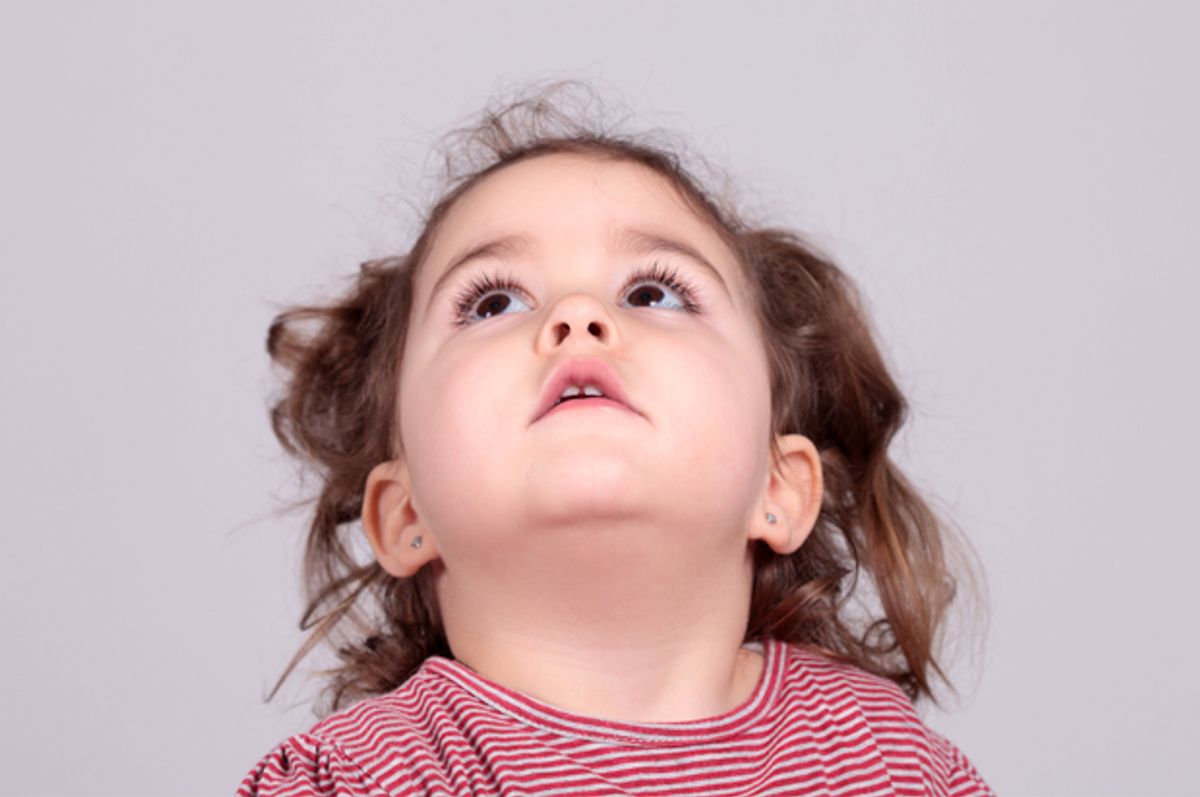 “Look at the traffic light,” I said to my 3-year-old daughter, Zelda, desperate for conversation, my voice hoarse from chatting. It was 8 a.m. but it had already been a long morning of cerebral gymnastics as I arranged every minute, meal and movement for a preschooler and a baby, while making sense of my hectic freelance working day ahead. And, serving oatmeal. Jon was an involved father, but I was the planner, always organizing, hovering above.

Which is why, normally, I loved my strolls to preschool with Zelda, when I was not distracted and could focus on her company. I enjoyed this window into her developing perspective, delighted by her surprising senses of wonder and humor. I’d felt absent from Zelda after an exhausting high-risk pregnancy with her little sister and a demanding work schedule. So I’d made sure to carve out this sacred time for us -- time to talk. Each morning, we pounded through New York’s honking, caffeinated streets, our whole environment an education, a chance for mutual enrichment.

But not today. Today I was talked out. We’d already discussed the foliage, seasons, how some people were short and others tall; we’d done the “whys” and gone through all the prohibitive signs along our path, including the no-liquor in the park. “Grown-ups,” Zelda had sighed.

“What about--” I drew a blank and panicked. I had nothing left to say.

In the past year Zelda had lost a cat and three great-relatives and gained a baby sister who usurped my attention. I’d been inundated with advice on how to talk to her -- about birth, death, sharing, separation, urination. Parents in my middle-class, fauxhemian milieu were always being encouraged to chat to show our awareness and concern; we were taught the lingo and tone to best discuss every single social interaction, from playground politics to sex. When our 3-year-old neighbor tantrumed about a sprinkle cookie, I watched her father lean down and repeat it would be so wonderful to eat a treat right now. “It’s important,” he told me afterward, “to acknowledge emotions and express empathy in the moment.” A colleague complained that her New Year’s fete had been screeched to a halt by a 5-year-old altercation; the adults grouped off to discuss hurt feelings with both parties before brokering a verbal reconciliation. My social media feed was recently overrun by a post that listed specific questions to ask your kid so she would open up and tell you about her day at school. I studied the queries (What was the funniest thing that happened today? Who did you want to sit next to?) as if I was training to be an investigative reporter.

Conversation kept our children alert, linguistically sharp, perhaps even entertained. I often overheard my fellow moms and dads loudly praising or instructing their toddlers – Good walking! I love you more than anyone! You really shouldn’t be eating dried fruit because it’s not ideal for oral hygiene!  Hemp milk, we drink only hemp milk! I can never help wondering whom these conversations are really being performed for.

Zelda’s preschool director once confided in me that sometimes, at drop-off, she heard a parent offer 12 different directives just as the child walked down the stairs to their class. “I’m afraid they’ll fall over! Kids don’t even listen after two or three words.” When I asked her why parents engaged in these running monologues, literally praising or critiquing each step, she right away answered that we levied constant verbal attention because we didn’t trust that our children could succeed without us. “With so many conflicting parenting philosophies readily available, parents can feel insecure. No one knows what to do. Google was never a parent.” I thought of my own upbringing, how I’d been trained to be a cultural critic rather than a diaper-changer. I applied those academic skills to my mothering, nervous about the more physical, instinctive actions required of a parent.   Those of us who worked feel a particular pressure to engage in the “talking cure,” as if our utterances helped concretize and maximize these fleeting moments with our ever-evolving kids.

But amid all these conversational and cultural tips, no one offered advice on one of the most basic things of all: how to be silent.

My Jewish background, with its excess of festivals and calories, didn’t help. We didn’t have Buddhist meditation, Hindu yoga, Sufist wordless worship, Christian monk muteness or Quaker silent services. I was from a people known for babble and volume, complementing our culture’s constantly loud media barrage. I had no rituals for stillness. Silence scared me.

The leaves crunched under our feet, crackling, cackling. Quiet was always a bad sign with my own mother.

Born on my Jewish grandmother Zelda’s flight from the Nazis, Mom was a depressed hoarder. I’d spent my childhood feeling physically and emotionally blocked from her by her piles of newspapers and laundry bins. She left for her government job before I woke up in the morning and was asleep on the couch when I came home – which was a relief. She was prone to mood swings, exploding at random utterances. I’d learned to associate her hush with bottomless sadness or her buried anger about to erupt. When she was awake and quiet, I felt nervous. I didn’t know where she was inside, or what would emerge.

But in those rare moments when she was energized and chatty, asking about my teachers or unpacking for me the double entendres in Gilbert and Sullivan lyrics, my stomach unclenched. Words, at least, showed me where things stood. Conversation guaranteed connection, an acknowledgment of presence, a check-in about mood. When I eagerly left home at 19, we developed a new relationship by phone, the distance beneficial. Our newfound connection was verbal and I hinged onto every syllable, my lingual link to love.

Now I urgently scanned our surroundings, wishing for a similar connection, something to break the silence with my own daughter. “What color is the bakery awning?”

We got to an intersection and I grabbed Zelda’s hand. I squeezed. “Ouch, Mommy.” I suddenly remembered how it was my Bubbie Zelda who walked me home from school each day. She raised me, cooked for me, shepherded me to ballet and drama and judo class. Montreal was freezing in the winter, and as we walked, I’d slip my hand into Bubbie’s pocket, or slide my fingers into her leather gloves, our digits melding. At school I’d been embarrassed by hunchbacked Bubbie who arrived howling in Yiddish, donning her babushka headscarf and flinging plastic bags of fresh vegetables and brisket. I’d walked ahead of her, pretending to myself I was heading to our Jaguar, which just happened to be parked far away. But the more we trudged eastward, the more I would step into pace with Bubbie and slip into a different genre of narrative, a historical one, imagining I was foraging through a Siberian work camp or sneaking across the frozen Vistula or something else she might have done during the war.

“What, Mommy?” Zelda prodded. “What about the special awning?”

“Oh, nothing.” We stepped onto the curb.

Zelda scurried ahead. “Don’t step on the crocodile!” she called back.

“The lines are crocodiles and the cigarettes are monsters, and the hoses are snakes and you have to step over them or they’ll eat you.”

All I’d seen was a sidewalk overcrowded with coffee vendors.

The truth was that, as with her namesake, Zelda and I are not fused. Silence marks our separation, but also, allows her to move forward, in her own way. Her imagination could grow in the space of my pauses.

So could our bond.

Now, it struck me, I could not recall a single conversation I’d ever had with Bubbie. But boy, did she love me.

Minutes later, we approached the school, where we arrived early -- super early -- of course, in reaction to my own mom’s perpetual lateness. But was rushing to show up before the doors opened any less stress-inducing? I noted my urge to fill these blank minutes with mindless chatter – Don’t forget your hat! Remember to drink your yogurt smoothie! – but I stopped myself. In the quiet hall, my phrases would have echoed, empty. Then again, I couldn’t just leave Zelda without a word. We parents are perched on the fulcrum of the generations, negotiating desires to reiterate and oppose. In overcompensating for my past, in trying not to fail my kids as my mom had failed me, I could so easily repeat similar mistakes. My stillness was not Mom’s quiet sadness. My words were not my daughter’s lifeline. I had to figure out my own way.

So I said, “I love you,” and punctuated it with a kiss.

“Too wet, Mommy,” Zelda replied, then scampered off to her class, leaving me in silence.