The GOP has no use for Rand Paul: How he became the former future of the Republican Party

His Libertarianism was supposed to help the GOP reach young voters & minorities. But things turned out differently 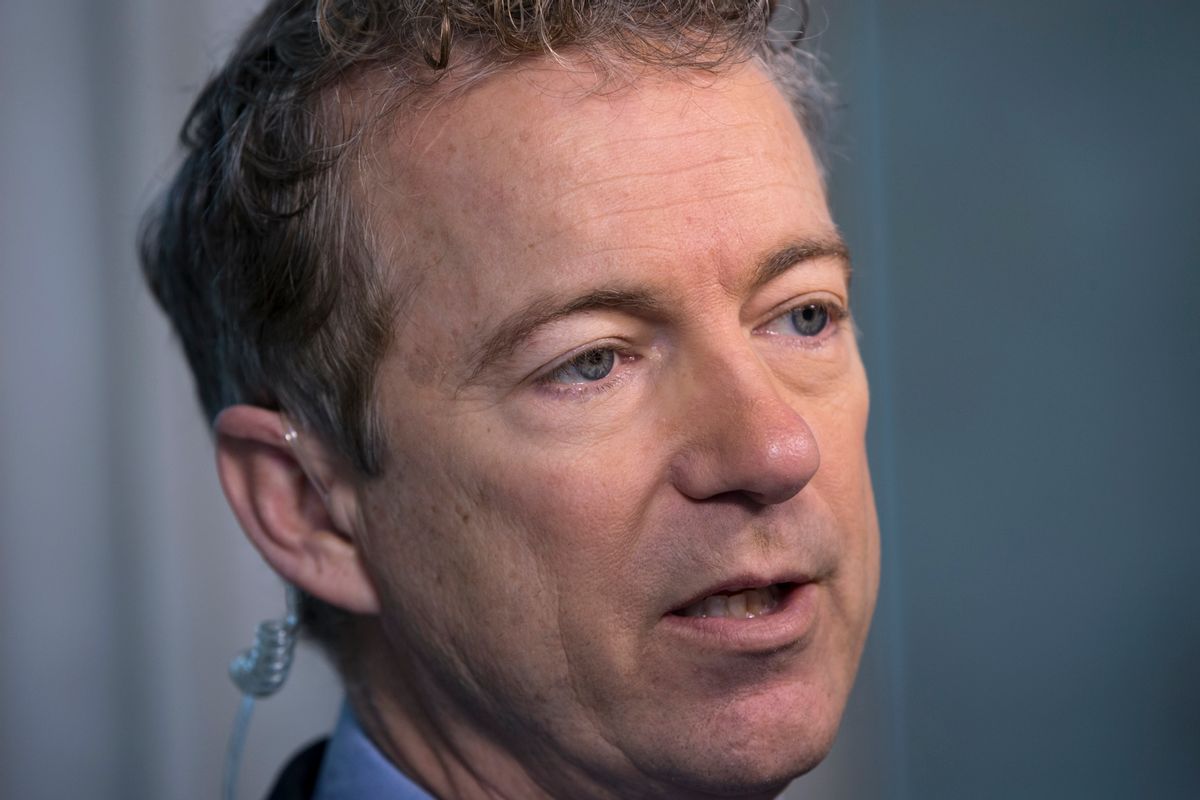 Rand Paul dropped out of the presidential race yesterday after coming up very short in Iowa and being told by the Kentucky GOP and Mitch McConnell that he'd better attend to his Senate race if he planned to stay in politics:

GOP leaders in Washington, including Senate Majority Leader Mitch McConnell (R-Ky.), had grown increasingly concerned about how little Paul was raising for his Senate race while running for president. Paul raised just $156,000 for the reelection race at home in the third quarter, a paltry sum that would not be enough for a competitive House race.

They went to a lot of trouble in Kentucky to change the process so that Paul could run for president while also running for the Senate and now that he's clearly going nowhere fast they would like to see him start to ding his supporters for money to keep himself in the job he already has. Undoubtedly, McConnell would like him to raise a few bucks for his fellow senators too. It's bad enough that Cruz and Rubio are sucking the donors dry -- and at least they have a chance to win the presidency.

There were many requiems for the Paul campaign yesterday and for good reason. There was a time when he was seen as the inevitable future of the Republican Party, a "different kind of Republican"who could appeal to "the youth" and bring a whole new constituency for what was assumed to be, for reasons never spelled out, an embrace of social liberalism and a return to isolationism among Republican voters. Where they got the idea that this philosophy transforming the GOP of 2015 remains a mystery.

Ian Millhiser at ThinkProgress wrote one of the best "Rand, we hardly knew ye" pieces yesterday, in which he examined his strategy and explained something that many people may not have fully understood before. Despite his history of opposition to some of the most important civil rights laws in our history, including the Civil Rights Act itself, Paul was actually trying to recruit racial minorities to his side by offering a deal that nobody really understood on the left and nobody cared about on the right.

Millhiser describes it this way:

If you shrink the government, Paul promises, you will shrink the criminal justice system too. And Paul has offered more than simply rhetoric in support of his idea that less government is the solution #BlackLivesMatter is looking for. He’s also sponsored criminal justice reform legislation, including a bill that would restore voting rights to many people convicted of non-violent offenses.

Paul’s call for less overbearing police forces, however, comes at a high price — and not just to people of color who risk being excluded from hotels and lunch counters. In his speech praising the Buchanan decision, Paul also likened this case to another Supreme Court precedent that he would like to restore: the Court’s 1905 decision in Lochner v. New York.

Lochner is anti-precedent, a decision that is literally taught in law schools as an example of how judges should not behave. Relying on a fabricated “right to contract,” Lochner gave employers broad immunity from laws intended to protect workers from exploitation. The Lochner decision itself struck down a law limiting New York bakery workers to a 60 hour work week. Subsequent decisions applying this fabricated right invalidated minimum wage laws and laws protecting workers’ right to organize.

According to Paul, this is the way things should be.

Unsurprisingly, this bargain did not catch on with African-Americans or anyone else. It's great that he would end the War on Drugs and support criminal justice reform. One hopes he continues to do so in the Senate if he wins reelection. But his desire to return to the antediluvian Lochner era, which allows businesses to exploit their workers at will and discriminate against anyone they choose is not an acceptable trade, particularly since no such trade is necessary. A decent society would simply end the War on Drugs and enact criminal justice reform while maintaining its commitment to workers; rights. This is not a zero sum game.

I wrote about Paul's inevitable demise back in August when it was clear that he had bought into the Village hype about his presidential prospects and had thus decided to run as a hardcore Republican with a few eccentric quirks, rather than a principled libertarian. He was flogging the Planned Parenthood hoax videos as if they were proof of women's inherent evil, and his alleged isolationism was nowhere to be found. He was being a regular old Republican "running to the right," and it sunk him. Nobody's quite sure where all his young male followers went but they sure didn't show up for him.

Perhaps they recognized what Libertarian writer Justin Raimondo saw when he said,

"The “libertarian-ish” Senator from Kentucky is just another Ted Cruz, albeit less loud (and with less book sales) than the Canadian performance artist-cum-politician."

The real Ted Cruz, as it happens, is doing quite well.

So Paul is now headed back to Kentucky, where he will be fighting to retain his seat against the mayor of Lexington, a self-financed gay millionaire, which should be fun.

The real question about Rand Paul is why so many political observers were convinced that he was leading a new Republican Party in the first place. Back in 2014, he was on the cover of Time magazine, touted as "The Most Interesting Man in Politics," who has been embraced by his party because they realized that they would need to grapple with "emerging demographics, the young minorities, the urban shifting away from older generations and embracing of more libertarian views on privacy, drug sentencing and foreign intervention." The New York Times Magazine published a piece by Robert Draper titled "Has the Libertarian Moment Finally Arrived?" in which he observed:

After eight years out of the White House, Republicans would seem well positioned to cast themselves as the fresh alternative, though perhaps only if the party first reappraises stances that young voters, in particular, regard as outdated. Emily Ekins, a pollster for the Reason Foundation, says: “Unlike with previous generations, we’re seeing a newer dimension emerge where they agree with Democrats on social issues, and on economic issues lean more to the right. It’s possible that Democrats will have to shift to the right on economic issues. But the Republicans will definitely have to move to the left on social issues. They just don’t have the numbers otherwise.” A G.O.P. more flexible on social issues might also appeal to another traditionally Democratic group with a libertarian tilt: the high-tech communities in Silicon Valley and elsewhere, whose mounting disdain for taxes, regulations and unions has become increasingly dissonant with their voting habits...

The party went in a different direction, to say the least. Their "fresh alternative" is a white nationalist billionaire. And his strongest competitors are hardcore social and economic conservatives of the kind who have populated the right wing of the party for decades. The libertarian moment, if it ever existed, turned out to be fleeting indeed.

And that's really because there just aren't very many libertarians out there. This Pew Poll from 2014 found that only 11 percent of Americans are libertarians. And the young millennials the libertarian moment was supposed to produce for the GOP turn out to be much more interested in the socialism of Bernie Sanders.

According to Michael Lind, Milton Friedman's grandson Patri, reluctantly accepting that libertarians are such a small minority, has tapped billionaire Peter Thiel to fund something called the Seasteading Institute to create city-states at sea that could be colonized by libertarians running from the horrors of reasonable taxation. Apparently, this is just the latest on a long line of failed efforts over the course of many decades to create "Liberland," a utopia somewhere in the world outside of existing governments.

If Donald Trump or Ted Cruz somehow make it to the White House, Liberland may end up dealing with a refugee crisis of its own. Libertarian exiles won't be the only ones looking for a sanctuary.