A fortified bonanza of white men and manhood: What the hell was I doing at the biggest gun trade show in the world?

630,000 square feet of wall-to-wall gun supporters, who think more guns are the answer: Welcome to the SHOT Show 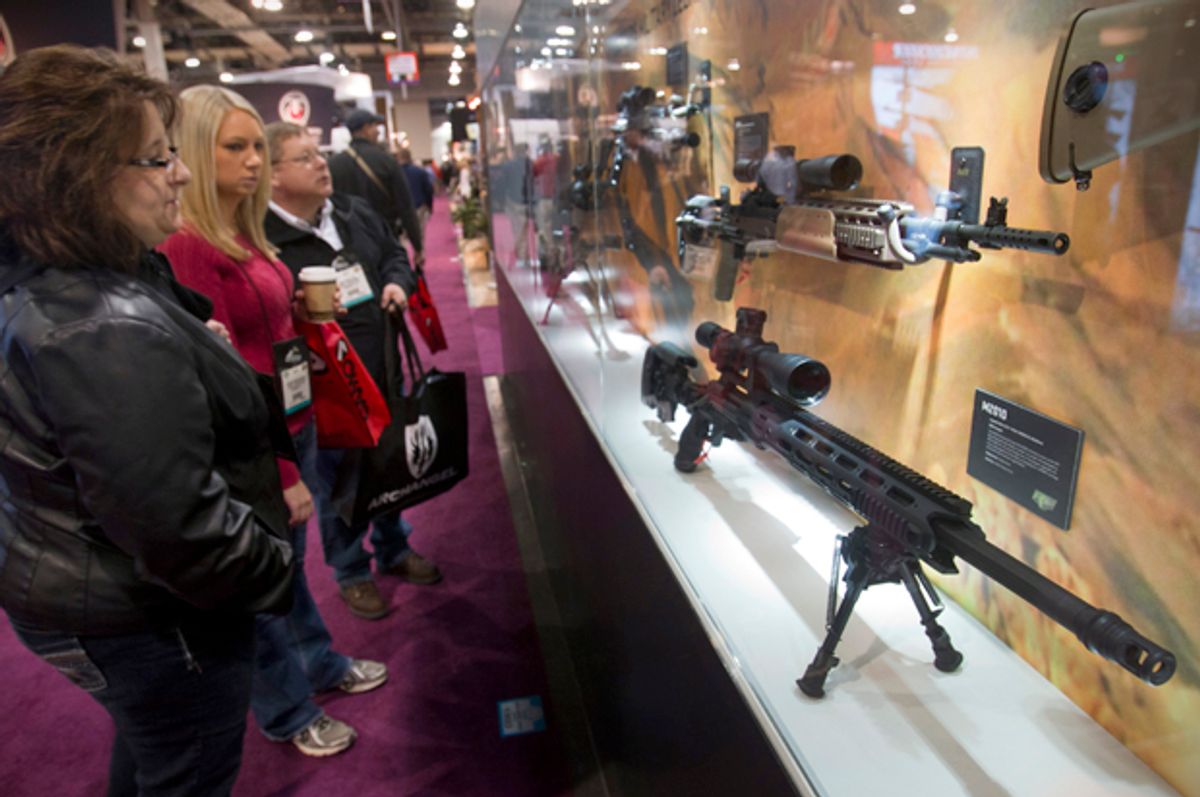 The 2016 SHOT Show was held this past week in the cross hairs of the Las Vegas Strip. It’s the biggest gun trade show in the world with 62,000 attendees and industry dealers from 100 countries showing the latest in firearms technology. Every possible gun, bullet, sight, silencer and ballistic pogo stick you could imagine was on display. The “SHOT” in SHOT Show stands for Shooting, Hunting, Outdoor Trade Show. Because these are people who may occasionally mow down deer with assault rifles.

The SHOT Show is run by the National Shooting Sports Foundation, a trade association for the firearms industry based out of Newtown, Connecticut, three miles from Sandy Hook Elementary. Next to the NRA, it's America’s other big gun lobby. The NSSF says its mission is: "To promote, protect, and preserve hunting and the shooting sports." Meaning, it's argued against limits on high-capacity magazines and supports legislation allowing concealed carry. It's also tried to keep the Environmental Protection Agency from regulating chemicals in ammunition.

The NSSF doesn’t want you using the words “assault rifle.” It’s just a rifle to them. AR actually stands for ArmaLite rifle, which is the company that first developed them in the 1950s.

It was made clear I was not to ask any of the exhibitors about gun control. Nor was I to ask questions like, “Is this the same kind of gun that shot the kids at Sandy Hook Elementary?”

Strolling into the immense grid layout, I entered Sands Expo Center’s 630,000-square-foot vortex of testosterone and power. A fortified bonanza of white men and manhood.

My initial conversations with exhibitors were about smart gun technology -- the use of fingerprint recognition or transmitters to unlock the trigger mechanisms of a gun. Some were OK with it, some were not. Vendor Omer Kiyani of Smart Tech was there from Detroit with his IDENTILOCK fingerprint-access trigger lock system. He’s a parent, who wants his kids to be safe from the gun he got to keep them safe.

Those against smart guns have problems with their reliability. They say the fingerprint access won’t work if a hand is covered in blood, possibly at the moment the gun is needed most. Lots of smart guns also rely on batteries, and a dead battery could render a gun useless as well. A few gun owners I spoke to didn’t like the smart gun technology because they don’t like the idea that the government could potentially “disable all the guns with the touch of a button.”

Further down the carpet was a display of gloved mannequin hands with hypodermic needles stuck up against them. This was TurtleSkin, from New Ipswich, New Hampshire, which make needle-proof gloves. “Think about police officers having to search pockets and bags,” the rep said. “HIV, hepatitis C and other blood borne diseases can be transmitted from needles pricking skin. It’s a real danger. We can protect up to a 28-gauge hypodermic needle.”

Next, a bullet booth caught my eye. ICC Ammo out of Reynoldsville, Pennsylvania. They make lead-free bullets that don’t ricochet. The representative said, “You wouldn’t believe how many people are injured every year from ricocheting bullets. Anywhere you’re firing guns in close confines, these bullets are safer.” The technology is called frangibility. A frangible bullet breaks into smaller pieces when it strikes an object harder than it. The drawback? These bullets cost 30 percent more. “In 2006, New Jersey was going to have their law enforcement go lead-free,” the rep said, “but when they saw the cost, they backed off.”

After a couple of hours of wandering, the tactical Law Enforcement and Armed Forces sections became indistinguishable from the hunting sections. The SHOT Show’s motto is “gear up.” Guns were everywhere, rifles the size of station wagons.

It all devolved in my head.

There were AR-15’s near the sporting section. Gear Up, for people who might like to spray automatic rounds at fowl and pheasants? You never know when that trumpeter swan is going to unload its M50 Mega-Cannon at you from the reeds.

Guns bigger than barges were in the duck/buck booths. “Really, what ducks are you hunting with these things?” I asked. “A duck that’s a tank?”

Made a stop at the SHOT Show beer bar and had a light beer. Overheard someone say, “Guns need alcohol almost as much as they do bullets."

You ever heard of a red-breasted merganser? They’re large, thin diving ducks with orange to red-orange bills. Two men in a booth for sights discussed a hunt, but I thought they were saying "mansplainer," not merganser. The taxidermy and mounting of a mansplainer, so I moved closer where I realized it was a bird they mounted not a man.

People in the infrared section were the most normal. They just want to see at night.

Here is how to get kicked out of the pistol section: inspect a Glock for eight minutes. When the rep approaches, turn away quickly, like he’s trying to steal your slice of cake.

Everyone I talked to there was voting Republican. They don’t want Democrats in office, yet Democrats politicking for stricter gun laws cause gun sales to spike. What benefits the firearms industry goes against their beliefs. Fear is their ally.

I felt like I needed protection, so I found Miguel Caballero’s booth, the bulletproof tailor from Bogotá, Colombia. He’s the king of discreet, wearable, bulletproof fashion, from military grade down to casual suede. At some point, we will all be bulletproofed. (A few weeks earlier, Caballero had shot me with a .38 at his warehouse in Bogotá.) In Vegas he was excited to unveil a new vest, combining riot-proof, bulletproof and stab-resistant elements. He said his objective at the show was to find new distribution channels in the U.S. The SHOT Show has a list of 110,000 gun shops in America, where his products could potentially be sold. Caballero stores will open in China this April.

I asked Caballero what the future of bulletproof technology is. “Liquid armor,” he said. “It will get thinner, lighter, stronger and more discreet.” He also talked about developing sound waves to the point where they could be deployed to alter and slow approaching bullets. “It’s way, way in the future, but maybe it could be.”

What Caballero is talking about with the sound waves is basically a force field. You heard that right. Force fields and deflector shields are coming.

The end of the SHOT Show was a Trump-voting stampede spilling through the corridors of the Sands Center into the early evening air of the Vegas Strip. Like sperm getting shot out of the vast sparkling gonad in the desert toward gambling and the golden egg. All these people, wall-to-wall gun supporters, who think more guns are the answer. I had all the infrared sights and moose-call whistles I could carry. Run for your lives.

Trent Moorman is an Atlanta-born writer and drummer living in Seattle. His work has appeared in VICE, Rolling Stone,Tape Op and Motherboard. For five years he has had a music column in print with Seattle’s The Stranger Weekly. He was once kicked out of a Yanni teleconference. Recently, he was shot by a bulletproof tailor in Bogotá, Colombia.