Salon talks to the "Daily Show" alum on the set of her new TBS show, where she has no plans to hold back 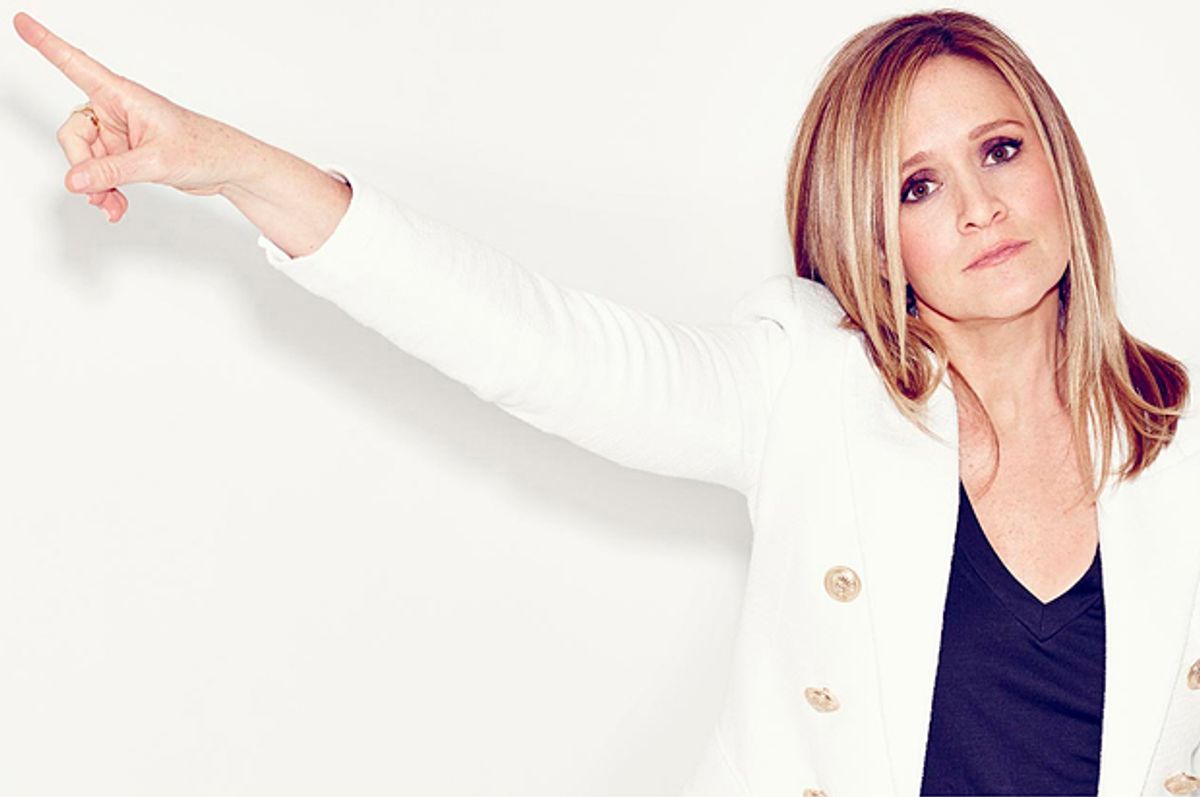 In the first episode of “Full Frontal,” Samantha Bee goes to Jordan to “investigate” Syrian refugees. The “Daily Show” alum became a legend on her previous show for field segments that interrogated idiots, liars and hypocrites through the winning combination of feigned ignorance and a willingness to do basically anything; Jon Stewart’s goodbye to her, last May, is a portfolio of some of her finest work. So for her new weekly late-night show—the first news satire show to be helmed by a woman, and one of just a handful of late-night shows in TV history with a frontwoman—one of its major distinguishing features is getting Bee out into the real world, interacting with the populace with her own special brand of curiosity and snark.

Jordan is really far afield, but Bee wanted to explore the screening process Syrian refugees go through before they are repatriated to other countries, including the United States. She ends up in a makeshift classroom full of refugee children learning geography in a tent. During recess, she gives them an American football, and then scolds them for “playing wrong.” She falls asleep during the lengthy explanation the aid worker gives her for what a Syrian refugee needs to do in order to find another home. And when she decides to help the refugees become better acquainted with America, Bee leads a whole class of adults through some helpful phrases, starting with “I… can’t… have… gluten.”

Bee is a 46-year-old blonde woman with a bit of a Canadian drawl and strategically deployed vocal fry that captures your attention almost without trying, on-screen and off-. She’s a physical, energetic comedian—so much so that she’s ditching the traditional anchor’s desk for her show, because she didn’t want to be encumbered when connecting to the material or the audience. Speaking with her this past Tuesday on the set of TBS’s “Full Frontal,” it’s immediately obvious why Bee is so successful in the field. She’s present, interested and warm, while maintaining a frankly breathtaking stream of sharp, inviting jokes.

Bee’s an unabashed feminist—she tells me she is “so confused” by people who don’t describe themselves that way—and a lot of the appeal of “Full Frontal” is that, like Amy Schumer, she is both feminine and funny onstage, equally comfortable with cracking woman-centric topics like abortion and sexism while making just as many jokes about boners and erections as she wants to. “Full Frontal” taped a test episode last week, and showed the press Bee’s opening monologue, where she took a stab at post-debate coverage. She channeled both Kate McKinnon’s robotic, desperate-to-please interpretation of Clinton—the manic, mechanical laughter—and Schumer’s not-safe-for-primetime vulgarity, including jokes about both “the bone-deep sexism of the American people” and the last time Bernie Sanders had a full erection.

Of course, Bee has been doing this longer than any of them. A sketch comedian from Toronto, Bee started working as a correspondent at “The Daily Show” in 2003, when Schumer was 21 and McKinnon just a teenager. She stayed there until Stewart first announced his retirement and then announced his successor, 31-year-old Trevor Noah. Bee was never approached for the position, which her husband Jason Jones (also a former “Daily Show” correspondent, and an executive producer of “Full Frontal”) called “a little shocking, to say the least”—Bee was the longest-running correspondent on the show and one of its most recognizable faces, a natural choice to pass the torch to. John Oliver has gotten his own show on HBO, “Last Week Tonight,” Stephen Colbert got first his own Comedy Central show and then David Letterman’s “The Late Show,” and Steve Carrell has become an Oscar-nominated A-list actor. But as executive producer Miles Kahn pointed out to me, Bee was there first.

“I don’t want to take anything away from Colbert, or Carrell, or guys who were there maybe a little bit before, and achieved bigger fame. At this point in their career, they’re big stars now," said Kahn. "But Sam did it longer. Jason Jones did more field pieces than anyone else. Those guys are pros at this.”

“Full Frontal” is stepping into a crowded market. Noah, Oliver, Colbert, Larry Wilmore and Seth Meyers are all in the same game, give or take a few format shifts. The difference is Bee, and based on what I saw Tuesday, that difference could be enough to cut through the exclusively male late-night market. It’s not just that she’s female—though Bee acknowledged, tongue firmly in cheek, that “I’m steeped in, you know, my woman-ness”—it’s that Bee is the right combination of skills and interests, coupled with a wide-ranging, empathetic perspective. In many ways, she channels the same frustration and outrage that drew viewers to Jon Stewart on “The Daily Show” in the early 2000s.

Take, for example, the segment Bee did for her test audience on Kansas State Senator Mitch Holmes, who became the topic of some news late in January when a dress code he wrote for female members of the legislature came to light. The best way to describe Bee’s take on the topic is that she reads him for filth. The righteous indignation that inspired a whole party takes on new life in Bee, as she goes for not just Holmes’ dress code—she exposes his terrible voting record, tears apart his state’s fiscal health, and ridicules him for not being able to do his job over the sound of his own hard-ons.

“I mean, who can write a budget when all the blood is rushing from your brains to your engorged penii because Shelly wore skinny jeans on Arbor Day?” she asks. She finishes with a remark about a glory hole that is probably unprintable, but I think you get the picture; Bee is merciless.

And Bee is not afraid of being angry onscreen. “Watch or you’re sexist,” reads the tagline for “Full Frontal.” The ads show Bee with one finger up, mid-admonition, with an open-mouthed look of irritation on her face. It’s a one-shot attack ad, so brilliant it hurts.

“Full Frontal” will air weekly, like “Last Week Tonight,” which both gives Bee work-life balance and allows for the show to be better thought-out than the average episode of a daily comedy show. And along with the desk, Bee is jettisoning regular guests, too. When it’s “germane,” she’ll happily invite people onto her show, but, she says, “We’re not seeking to have guests on to just talk about their movies. I’m not—I can’t really do that convincingly.” The rest is still being figured out. “I’m not saying there will be black box theater, but I’m not saying there won’t be, either.”

There are, of course, potential pitfalls. “Full Frontal” feels a lot like “The Daily Show,” because Bee, executive producer Kahn, and showrunner Jo Miller are all “Daily Show” alums; a purple set and a missing stage can’t quite shake that feeling. And for good or ill, Bee is, in her words, “flying by the seat of my pants.” Several reporters, including myself, asked her about her process, her persona, or her code-switching—from conspiratorial fellow idiot to outraged feminist to dumb ditz, all of which she accesses with great ease. Bee’s best response is that for her, it’s natural.

“I don’t really think about it… at all,” she says to me, with her characteristic pausing delivery. It’s funny, because Bee interrogates everything else with diligence—and has spent so much time thinking about and hashing out this show that her consideration comes through in even the most minor details. But in this, the most essential quality of the show’s appeal, she’s going with instinct.

Before going into acting, Bee considered law school, and she tells me she remembers arguing with her grandmother about Ronald Reagan at the age of 10, even though as a Canadian, she was discussing foreign politics. Her mother was political, too, in that “she was a big a food boycotter,” Bee said. “We definitely boycotted grapes.”

“And I thought she was crazy, of course, when I was growing up. But now I understand where she was coming from,” she said.

Her crew also feels the magic. “It’s hard to explain how good she is at this job,” Kahn said to me, describing her as “fearless.” He tells me a story of, on “The Daily Show,” Bee’s commitment to a segment imitating a viral video of David Hasselhoff, where he devours a burger while lying on the floor, drunk. Their conception of it was to do it on Sunset Boulevard, which meant eating a burger off of the sidewalk. The crew suggested putting a wrapper underneath it, but Bee insisted it wouldn’t be funny unless it was directly on the pavement. She ate the burger. The segment didn’t even make it to air. “You cannot be afraid to eat a hamburger off the sidewalk,” Kahn said, laughing. “This is your job.”

If I could hazard a guess at Bee’s appeal—and the appeal, specifically, of the way she interrogates elected officials and interviews people in the field—it’s that like Stewart, Bee understands that a significant part of being a newsy comedian comes from understanding and practicing journalism. This has been an issue that has specifically dogged Trevor Noah in his first few months in the post. Comedy isn’t supposed to have a goal beyond making people laugh, but it was hard to watch Stewart’s “Daily Show” and not see the integrity of it. Oliver and now Wilmore both bank on that same kind of trust from the audience; Colbert, if anything, has moved away from it since leaving “The Colbert Report.” Bee has a sense of mission, and it comes through, and that might be what makes “Full Frontal” a show you have to watch.

After all, speaking of mission: “Full Frontal” has already made headlines for its novel hiring process, developed by showrunner Miller. At “The Daily Show,” when she was for many years the only female correspondent, Bee felt like an “outlier,” as did Miller, who was one of the show’s writers. “We’ve had some success, but we’ve worked really hard… I always thought of [the show] as a place where we could develop talent.”

Both Miller and Bee made creating a diverse writers’ room a priority—and both rave about how successful the experience has been, in terms of creating a “mix of voices,” as Miller put it. The segment in Jordan came together in part because one of their new hires is an Arabic-speaker familiar with the area, who had traveled to Jordan before. This is their vision in motion, and it’s already getting results.

“We are reaping the benefits of [a diverse workplace] in more ways than are even calculable... the diversity of the pitches, alone, is worth getting up for, every day.” Bee said. As Miller said to me later, with the gimlet understanding hard-earned in the trenches of Comedy Central: “There’s no value in duplication.”

That’s a principle that could speak for the whole show. Monday night, “Full Frontal” debuts, taking its vision in both hands and putting it into the world. The risks are evident; TBS is a less-known network for a late show, it’s nearly impossible for women to survive in late-night comedy, and audiences are already overwhelmed with television options. But Bee is taking it in stride.

“Look, we may only have one kick at this can, we don’t know. But while we’re here, we might as well try to do something, you know?”