Sen. Marco Rubio had to fend off an assault from the Garden State bully. Instead, he nearly self-destructed 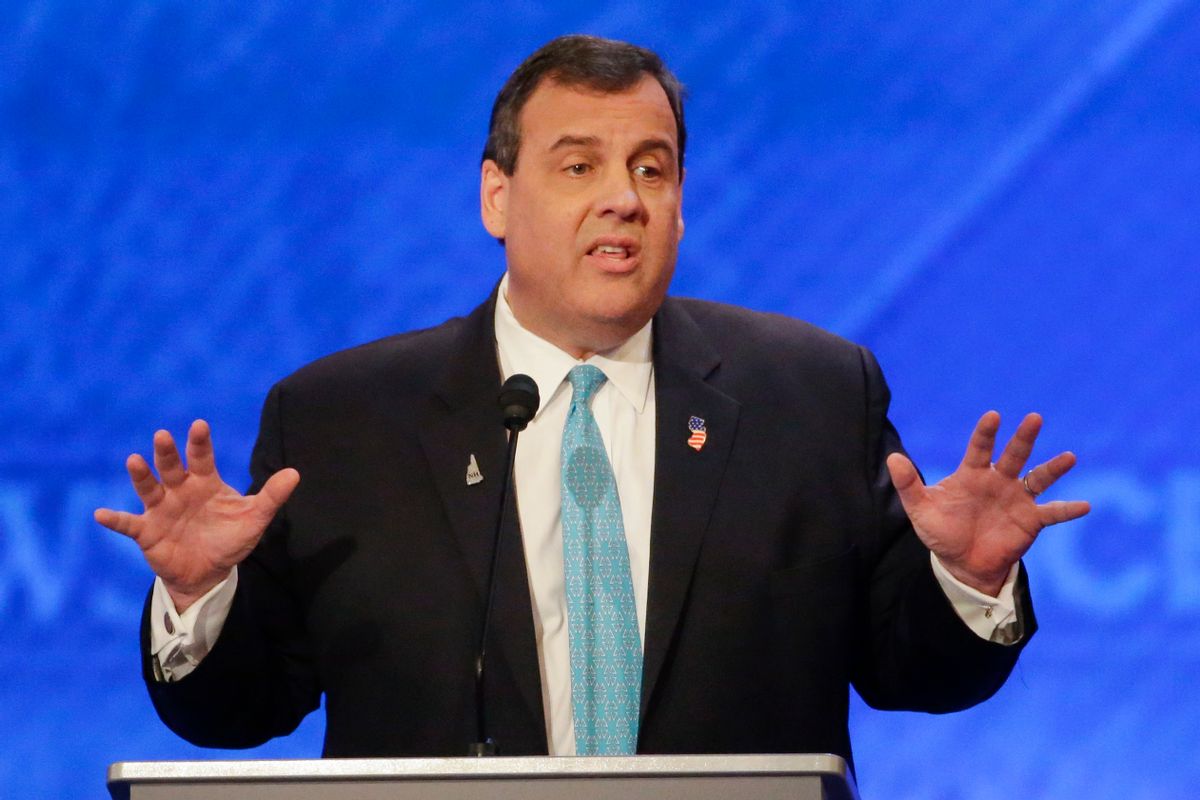 The moment when Saturday night's Republican presidential primary debate was effectively over came long before the seven candidates left the stage at the St. Anselm's College Institute of Politics in Manchester.

About 30-odd minutes in, ABC’s moderators, the frankly abysmal Martha Radditz and David Muir, turned the klieg lights onto Gov. Chris Christie and Sen. Marco Rubio. What transpired next was one of the best pieces of debate-stage political theater in recent memory (which isn’t saying much; although I’d bet guys like Carl Diggler had fun).

And if it’s possible for a moment from a debate to have a lasting impact on a presidential campaign — which recent history suggests is no small question — I’m guessing that the gleeful whooping Christie proceeded to administer to Rubio will be remembered as one such moment. Before I explain why, though, you’ll have to let me set the scene.

Going into the debate, neither Christie nor Rubio were especially likely to come out of next week’s New Hampshire primary with a win. According to the polls, overall, New Hampshire remains what it has been for much of this primary: Trump territory. The real game, then, was over which “establishment” candidate — Rubio, Bush, Christie, or Kasich — would finish second (or conceivably third, if Cruz was the runner-up).

After parlaying a third-place finish into first-place momentum in the Iowa caucuses — with a lot of help from the media, by the way — Rubio was the most likely second-place finisher. Which explains why Christie, who has basically been living in New Hampshire for the past year, started hammering the senator as a novice with no accomplishments; a nice guy, sure, but also a rookie. It explains Bush and Christie’s unofficial, temporary détente, too.

It was bound to be dramatic, therefore, when Christie and Rubio were first pitted against one another. Still, even if we acknowledge that the matchup of these two abnormally telegenic politicians (in the broadest sense of the term) was bound to make for better television than the somnambulant, passive-aggressive, I’m-not-mad-I’m-just-disappointed nonsense Dr. Ben Carson was laying on Sen. Ted Cruz, the results were extraordinary.

Things got started when Rubio was asked to respond to Christie’s allegation that, after experiencing the presidency of Barack Obama, who was elected as a first-term U.S. senator, it would be especially unfortunate if the Republican Party were itself to nominate Marco Rubio, a first term U.S. senator, for the White House. “Fool me once, shame on you. Fool me twice, shame on me,” Christie had said (bettering his former benefactor, George).

Rubio’s comeback was pretty good, if a little obvious in its intent: He argued that experience was overrated; if it mattered, Vice President Joe Biden would be a good candidate for commander-in-chief. He then argued that an unspoken premise of the criticism — that Obama has failed in part due to his inexperience — is faulty. Obama knows exactly what he’s doing, Rubio said. The president is not a fool; he’s a menace.

Christie wasn’t having it, dismissing Rubio’s Biden straw man and recommitting to his initial attack. Rubio’s a nice guy, a smart guy, Christie said; but the simple fact is that he’s never had to make an important decision. This got a noticeable round of applause from the audience. And perhaps that’s why Rubio then proceeded to self-destruct.

What Rubio’s next five or so minutes such a disaster wasn’t really what he said — but the fact that he had already just said it. Looking mighty flummoxed, Rubio tried to parry Christie’s second attack by pivoting once again to Obama, hoping to bring the crowd around to his side by using generous helpings of ideological red meat to help their tribal identification overwhelm their intellect. It had already failed, but he was doing it again. Worse still, his second answer was almost a verbatim repeat of his first.

Remember: The knock on Rubio has always been, essentially, that he’s a lightweight. He’s young, pretty good-looking, and he exudes the kind of Kennedy-esque earnest, “idealistic” machismo that seems to send a thrill up the legs of the Republican Party’s aged voter base (as well the aging ranks of the elite political press). As they once said of that cherubic whippersnapper Al Gore, Rubio is an older person’s idea of a young person. There may not be much there there, in short.

Well, it’s hard to imagine anything Rubio could have possibly done that would more immediately, and humorously, affirm the caricature. Here he was, really being challenged for the first time  — and by Christie, a world-class bully, no less — and he was wilting. He was like an artificially intelligent robot confronted with a logical question his programming couldn’t handle. I worried for a moment that my stream of the debate had begun to skip.

Whether due to incompetence or pity, the moderators tried to move on. But like a really big, mean, and sadistic shark, Christie was all over it. He mocked Rubio for falling back on his talking points — something all politicians do, but rarely so conspicuously — and continued to shred the senator’s (lack of a) record, as well as tout his own hands-on experience governing New Jersey.

Rubio tried to tu quoque Christie, noting that the governor had only grudgingly returned to the Garden State during a recent snowstorm. Christie all but rolled his eyes and laughed it off while the audience booed — at Rubio. And then, unbelievably, Rubio started to fall back into repeating the talking point (let’s not pretend Obama doesn’t know what he’s doing…) yet again. “There it is!” Christie interjected. The crowd was with him. Rubio’s emasculation was all but complete.

And, I swear to God, about 40 minutes later, he used the same line again.

Now, as I said at the beginning, this was far from the end of the night’s festivities. But I’m guessing that the whole rest of the debate put together won’t matter nearly as much as those five minutes. Because perhaps more than any other single traditional element of a presidential campaign, the response to debates — especially primary debates, and especially primary debates on a Saturday night — is influenced by the media. Sometimes it’s a negative influence, granted. But that’s influence all the same.

And the media, I promise you, is going to be obsessed with this first, most dramatic Christie-Rubio confrontation. Because not only does it make for good television and good copy (here I am, 1100 words in, and you’re still reading), but it’ll make for great late night jokes and “Saturday Night Live” skits, too. That’s thanks, in part, to its already fitting a pre-established narrative. Christie, the bully you like despite yourself; Rubio, the young, handsome and über-ambitious empty suit.

So expect Christie’s dismantling of Rubio to be the part of Saturday night's debate that people remember — if anyone remembers any of it at all. It does not rank among the United States’ most inspirational moments of civic engagement, admittedly. But if nothing else, it showed that professional bullies like Chris Christie can provide a valuable public service every now and then.