Mainstream Media is pushing this "catfight" narrative around female voters, and even some feminists fall for it 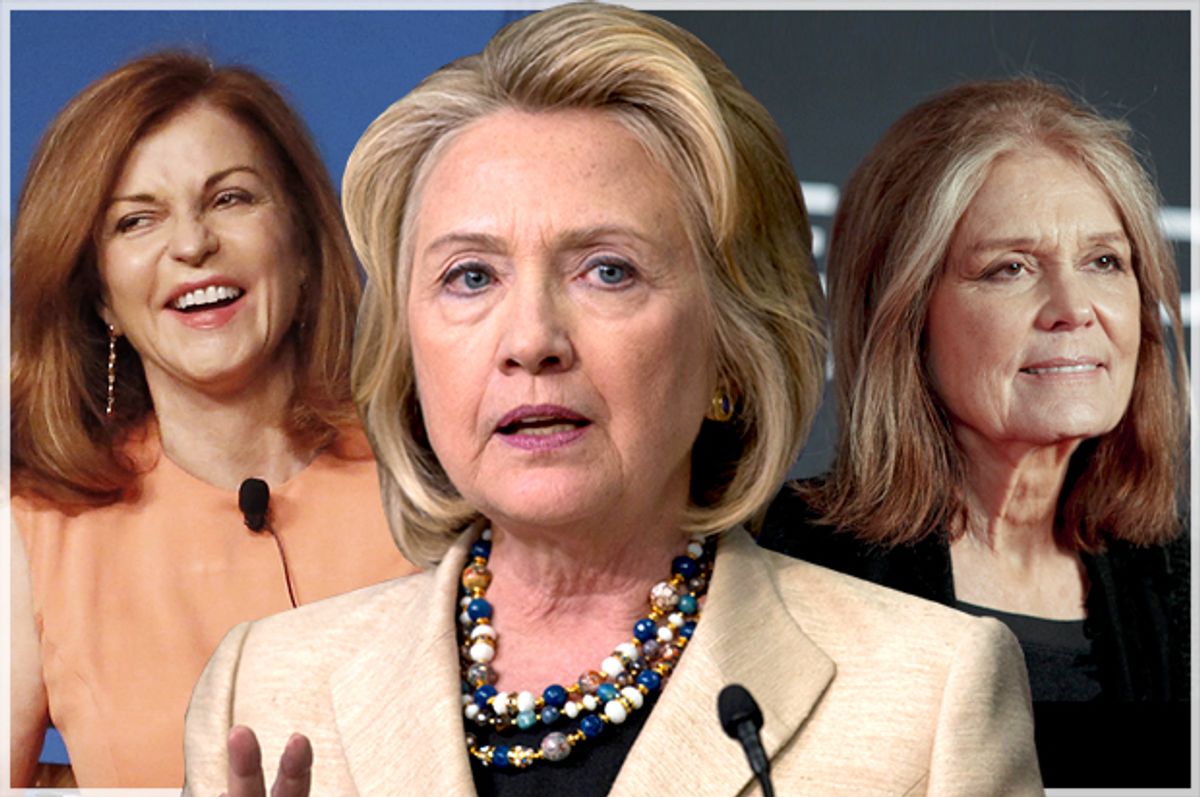 No one expected that Hillary Clinton could make a bid to be the first female president without things getting really ugly on the gender politics front, but the weekend before the New Hampshire primary, with the competition from Bernie Sanders getting fierce, things took an especially nasty turn. It's not just the sexist attacks against Clinton, either. A couple of feminist defenders of Clinton are being baited into following the mainstream media script that pits younger women against older women.

Younger women support Sanders in higher numbers than older women do. This is not surprising. Younger men also support Sanders more than older men do. The politics of idealism have always had more sway with younger people than with older, battle-hardened people. But rather than accept the simplest and likeliest explanation —that men and women tend to be more alike than different – much of the mainstream media has been eager to portray the age gap between women as a titillating catfight between jealous old hags and nubile bimbos.

Gloria Steinem took the bait on "Real Time With Bill Maher" on Friday night, when asked why the majority of young female voters support Sanders over Clinton. She argued that it's because women grow "more radical" as they age and added, "And when you’re young, you’re thinking, you know, ‘Where are the boys?’ The boys are with Bernie."

Steinem has since apologized, but she really should have known better in the first place. She's been around long enough to have seen how, every few years, the media latches onto these silly stories about how young women are abandoning the feminism of their elders, giving up the fight for equality and ambition because they want to be more popular with the boys. It was said about female Obama supporters and about '90s era "sex positive" feminists and during the anti-feminist backlash of the '80s and it was even a slur launched at the flappers in the '20s, who were said to be abandoning the hard-won battles of the suffragists.

Similarly, Madeline Albright has attached herself to the young-women-are-bubble-heads narrative. "We can tell our story of how we climbed the ladder, and a lot of you younger women think it’s done,” she said at a rally for Clinton on Saturday. “It’s not done. There’s a special place in hell for women who don’t help each other!”

That quote about women helping each other, which The New York Times reminds readers often adorns the sides of Starbucks quotes, has always grated on me, because, in the name of female empowerment, it actually lets men off the hook. Why is there a special place in hell only for the women who resist women's equality? Aren't men exponentially more responsible for holding women down more than other women? Why are women the only ones expected to do something about gender injustice?

While it's always tempting to reach for cheap explanations when other women disagree, feminists need to resist the hags-vs-bimbos narrative with all our might. It's sexist on its surface, reducing women's political disagreements to a struggle over male attention, and is clearly a narrative set up to demonize and shame all women. It also reinforces the toxic notion that men are irredeemable, that they can never be expected to support women's equality and so have to be written off completely while all the focus is put on why women aren't doing enough.

To see how this generational narrative pitting young vs. older women is being used by sexists, look no further than Maureen Dowd's ridiculous Saturday column, headlined "Hillary Battles Bernie Sanders, Chick Magnet." In case there's any doubt that this is another iteration of the hags-vs-bimbos narrative, there's a picture of young Hillary Clinton up top, who Dowd claims was "an idealistic young feminist, chiding the paternalistic establishment" but is now a member of "the paternalistic establishment."

It's complete nonsense, of course — Clinton has, if anything, become more resolutely feminist over the decades — but Dowd has never been one for consistency when it comes to spraying her irrational hatred for Clinton all over the pages of The New York Times.

Indeed, in the same piece, she does an about-face. After accusing Clinton of being too comfortable with conservative norms, she then castigates Clinton for being too rebellious against the patriarchy, er, the paternalistic establishment.

Bill could tell her not to shout her way through rallies, that it doesn’t convey passion but just seems forced, adding to her authenticity problem. Her allies think mentioning her shouting is sexist, and sexism does swirl around Hillary, but her campaign cries sexism too often. In 2008, Barack Obama used race sparingly.

So which is it, Maureen? Is Clinton too much of an establishment player, who disappoints young women because she plays by the rules? Or is she too radical, refusing to obey her husband and rejecting the paternalistic establishment instructions to pretend to be cool with stuff, like sexism, you aren't actually cool with?

The answer is "everything women do is wrong", especially in the eyes of Dowd, especially if the woman in question is Hillary Clinton. After all, she is demanding that Clinton — and feminists, by implication---unilaterally disarm in the struggle over women's political equality. Dowd doesn't offer any limits to Clinton critics on how much sexist vitriol they can aim at her---Dowd herself is fond of tossing out quite a bit---but feminists are supposed to be parsimonious in pushing back. You can dress it up however you like, but that's just demanding that Clinton and her supporters lay down and take whatever gendered abuse is dished out.

Of course, all the stupidity around gender isn't complete without the folks at Fox News weighing in. While discussing the Steinem/Albright controversy on "Fox & Friends," host Anna Kooiman absurdly asked, "is it fair for women to vote on issues other than just women's issues?"

It's a shockingly dumb question, but is it that big a surprise that such a reductive view of women would crop up in a media environment where women voters — who are literally the majority of voters — are treated in such a reductive manner? This is why so many feminists are eager to get a woman into the White House. It's not a cure-all — and certainly not the only thing to vote on, which is why Clinton supporters aren't going to vote for, say, Sarah Palin — but perhaps seeing a woman out there, every day, doing the hard work of being the President of the United States could go a long way towards showing that women really are more than these reductive stereotypes, that they are full human beings with the same complex, nuanced concerns that men are assumed to have without question.