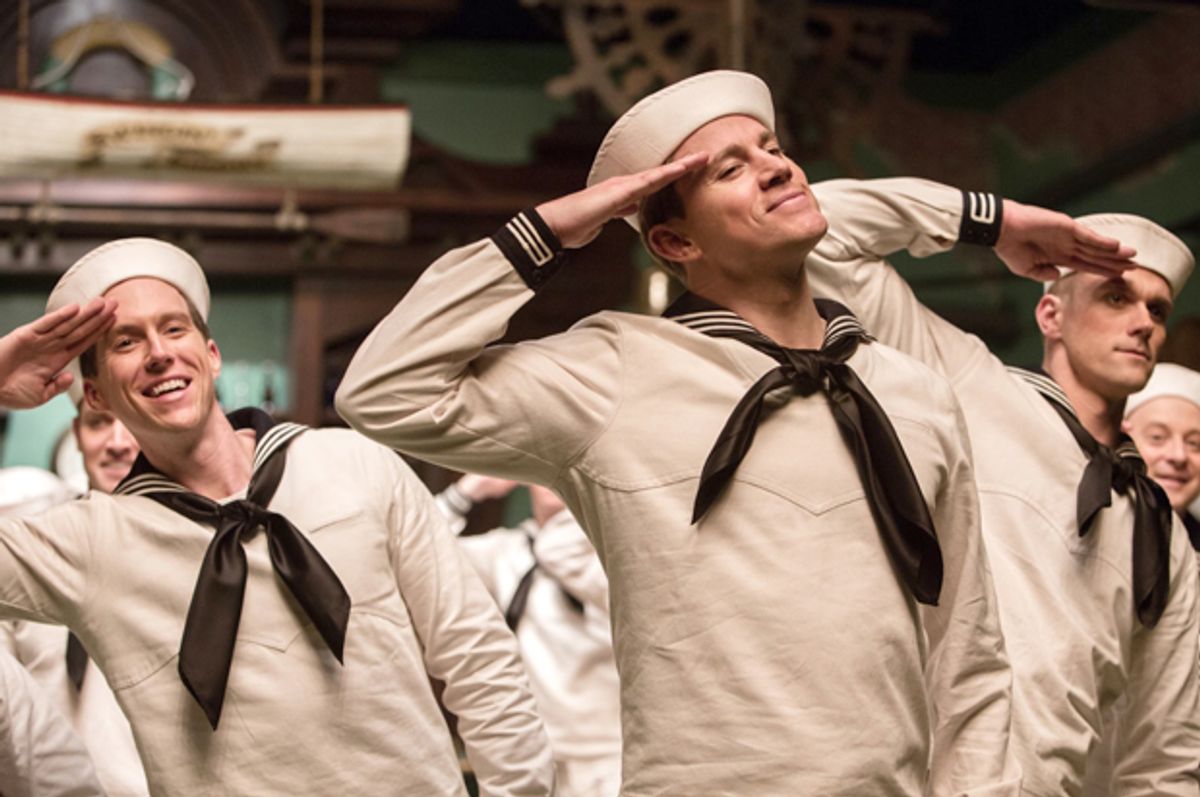 The Coen brothers put story first. They never let commercial considerations, or anything other than the demands of the story they’re telling affect their artistic choices. They always cast the very best actor for the part in every movie they make, and never worry, about, say, whether that actor is famous or not. Oh, wait.

After the Washington Post’s Ann Hornaday recently questioned the “pervasive whiteness,” of the new Coen brothers’ film, “Hail, Caeser,” the Daily Beast’s Jen Yamato asked Joel Coen to respond. He said: “It’s an absolute, absurd misunderstanding of how things get made to single out any particular story and say, ‘Why aren’t there this, that, or the other thing? It’s a fundamental misunderstanding of how stories are written."

Now, that’s the kind of dialogue that makes a movie like “Hail, Caeser” so enjoyable. That’s the kind of pretense to artistic purity the Coen brothers usually find gag-worthy, as in the kind of slipping-on-a-banana-peel fate they routinely dish out to characters who speak that way.

I’m sure that, if asked, the Coens would say they cast Josh Brolin as '50s Hollywood executive Eddie Mannix in "Hail, Caesar" because he was right for the part. I also assume that had he not been available there were other actors of necessarily varying heights, weights, ages, accents and skill, whom they would have considered — Brolin's character was based on real Hollywood fixer of the same name, but Brolin could hardly be mistaken for the real Mannix's twin. Yet apparently they would have drawn the line at a fixer with dark skin. Because that would be ... idiotic?

The Coen brothers are artists, they tell us. They don’t think about whether someone is black, Jewish or a dog (hmm) but they do—completely by weird coincidence—write characters who are right for their friends Josh Brolin and George Clooney to play. Three times and counting now, for each of them. Just a coincidence. A weird, flukey fluke!

Apparently, Joel and Ethan Coen never worry about, say, the cost of setting a movie in a particular location as they begin to create the story. They never concern themselves with budgets, or commerce or politics or anything other than an all-consuming aesthetic imperative. They never ask questions about how human beings react to their art, or how they get a sense of their place in the world through that art.

It’s an unshakable truism in Hollywood that our culture isn’t affected at all by the product—I’m sorry, the art—that the film industry produces, except in positive ways. Every year at the Oscars an actor, often Clooney, will justifiably laud the many ways in which movies have helped changed the world for the better — but if a critic dares to raise the most basic of questions about an all-white cast, she proves herself a Philistine.

Nobody is ever influenced in a negative way by what they see on a screen, say the people who put things on screens. Sure, we quote the movies to each other every day. We walk and talk and dance and kiss and dress and cut our hair like the people we see on TV. But we don’t, say, act violently because of the movies. We may quote the movies while we’re doing violence, we may dress up like movie characters when we do it, but only a rube would see some sort of connection there. Only an ignoramus would detect a worldview in the deliberate choice to write and make a movie with no black characters.

Which is really irritating, because one of the things I resent most about the selective moral obtuseness of Hollywood is that it puts me on the side of people I disagree with about pretty much everything. Why does the film industry want to alienate natural allies, people who actually agree with principals like artistic freedom that it so disingenuously appropriates? Defending an unfree social order on the grounds of artistic freedom is some twisted shit.

And don’t think you’re not doing that, Joel Coen. When a thirteen year-old black kid watches your film and sees, yet again, for the jillionth time, no one like her on screen, what do you imagine she feels? Do you imagine she understands your extremely circumscribed notions of artistic purity? Because I imagine she does. I imagine she sees a screen full of “stylized” representations of the world: exaggerated or shrunken or otherwise manipulated objects and words and sounds and people clearly meant to represent some essential truth about their real-world counterparts—and I imagine she knows exactly what’s up.

She knows that there was only so much room on your white page for black. She knows that your page is big enough for any untrue thing, as long as that thing is white. As long as all those characters speaking the way nobody speaks are white, because c’mon, nobody was black back then. There just weren’t any black movie stars or dancers or executives, except for like maybe a few thousand.

I don't think the Coens mean any harm. I don’t think they mean anything by making a choice to cast mostly white actors. It probably doesn’t feel like a “choice" at all — when they think of a face, the face they likely see is white, unless otherwise specified, like "Hail, Caesar"'s Latina actress Carlotta Valdez (played by Veronica Osorio). Imagine a '50s femme fatale, and the faces of Lena Horne or Diahann Carroll or Eartha Kitt do not appear — Esther Williams and Veronica Lake do instead. Maybe they don’t conjure the faces of Harry Belafonte or Sidney Poitier for the matinee idol, but those of John Derrick and Steve Reeves. I get it. I get it because as a white man of roughly the same age I grew up in the same world they did, where the first face, the default face, the only face, was white. Until proven otherwise. A black face in that world, before it was anything else, was a black face.

“Hey, what’s that black face doing on a character who should be white?” Joel Cohen, isn’t that what you’re worried your audience would think if they saw David Oyelowo playing Mannix? They probably would, many of them. But it’s obvious from your films that you became an artist to upend that sort of reaction — at least when it comes to other lazy pieties — not to indulge it.

The only way we are going to change what needs to be changed is for white people to consciously, intentionally, upend their imaginations. The way many of us do that is through art. Joel Coen, I know you remember pretending to be the people in the movies you watched as a kid. I know you remember how your thoughts and behavior were altered by those movies, how you walked like McQueen or talked like Connery. You remember how the movies changed you, how they opened your eyes to the truth of war, sex, love or mortality. Of yourself.

Your work affects others. You know this. You see it make people laugh and cry and think. That’s why you make it. Your work is good, it’s powerful, powerful enough enough to nudge the world a little, one way or the other.  You must know that when a black kid watches your movie she will see a world where she doesn’t exist, then walk out of the theater and catch her reflection in a window, and wonder what exactly it is that she is seeing.

Or can’t you imagine such a thing?