Yet another chump for Trump: The "make rape legal" guy says Trump "comes the closest to what I think is true" 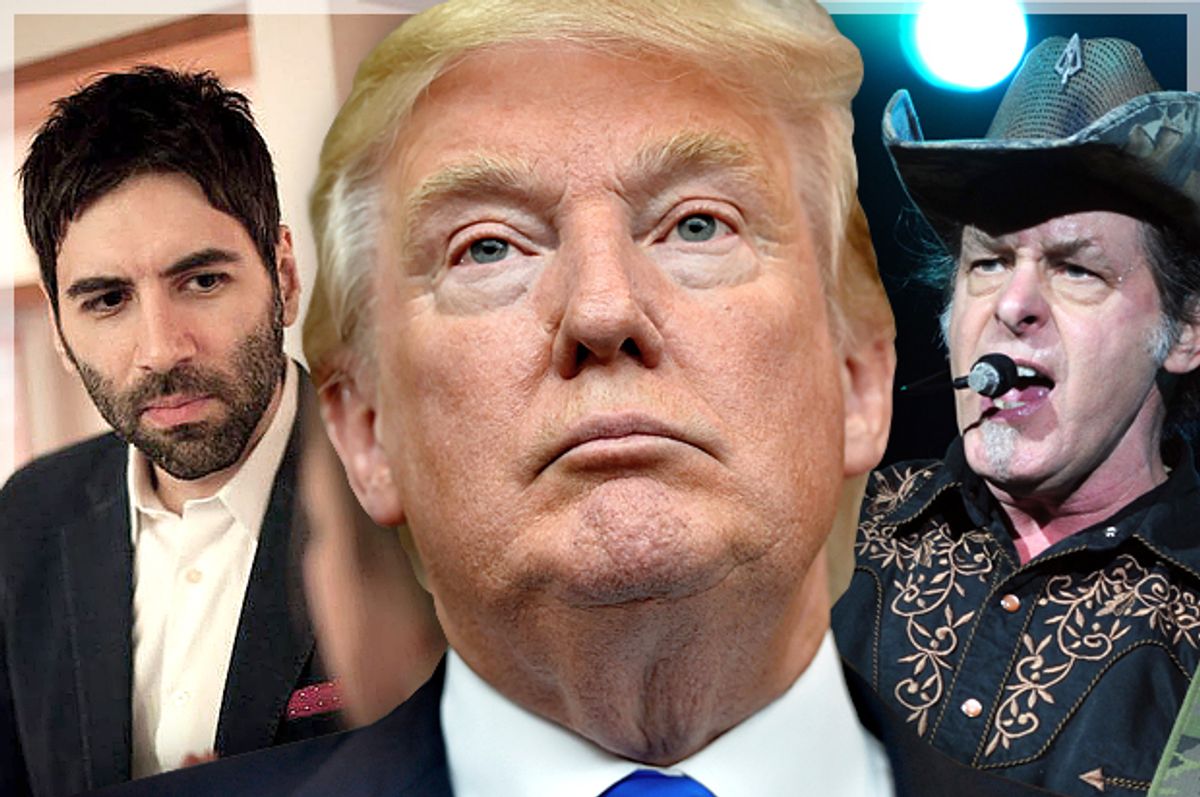 In a statement that will shock absolutely no one, Daryush "Roosh" Valizadeh — the so-called brains behind the misogynistic Return of Kings site and its sad community of persecuted baby men — revealed at a recent press who he likes for the next president of the United States. As you might expect, he's not a Hillary guy. Not feeling the Bern. And Rubio is definitely not his bae. Nope, just like plenty of other modern American dirtbags, this guy's with Trump!

While Roosh -- who only last week decided that a 2015 essay in which he advocated to "make rape legal if done on private property" was satire and who apparently lives in his mom's basement -- did not commit to a full fledged endorsement, he did assert that "Donald Trump comes the closest to what I think is true." Because just like Roosh, Trump is "anti-establishment."

It's quite the exciting array of supporters over there in the corner of the man who last week lost in Iowa. Last month, Liberty University head Jerry Falwell Jr. — who recently opined that "If more good people had conceal carry permits then we can end those Muslims" — backed him, calling him a "breath of fresh air." And of course, walking word salad Sarah Palin hilariously declared herself on his side in January, representing for the barely coherent "right wingin’, bitter clingin’, proud clingers of our guns, our God, and our religions, and our Constitution."

Trump's also got "Duck Dynasty" star Willie Robertson, who explained his support back in September by saying, "We’re both successful businessmen. We both have pretty big shows on television. We both have wives that are a thousand times better looking than us, so I like Trump." (Phil Robertson, however, says he's a Cruz man.) Convicted rapist Mike Tyson said in October that Trump "should be president of the United States. Let's try something new. Let's run America like a business, where no colors matter. Whoever can do the job, gets the job." The same month, person who was once famous on MySpace and flat earth believer Tila Tequila also threw her support in the Donald direction. And perhaps somewhat fancifully, full time crazy person Charlie Sheen has offered "If Trump will hv me, I'd be his VP in a heartbeat!" But he has competition: N word aficianado Hulk Hogan also wants the gig.

But it's not just washed up celebrities who love Trump. It's downright terrible humans. Ted Nugent, who was once known for something other than being a scary racist who wants to kill Obama, calls Trump "the hellraiser America has needed." Ann Coulter believes that "absolutely literally, thank God for raising up Donald Trump and giving us a chance to save the country." And former Ku Klux Klan grand wizard David Duke calls Trump "the best of the lot" running and says he "understands the real sentiment of America." So if Roosh, when asked who he's voting for, says Trump "comes closest to what I think is true," it would seem to confirm what you likely already suspected. The choice of hateful, basement dwelling trolls is Donald Trump.