"21st-century McCarthyism": NY bills would make a blacklist of those boycotting Israel over human rights violations

NY joins growing list of states that, under pressure from right-wing groups, are trying to punish supporters of BDS 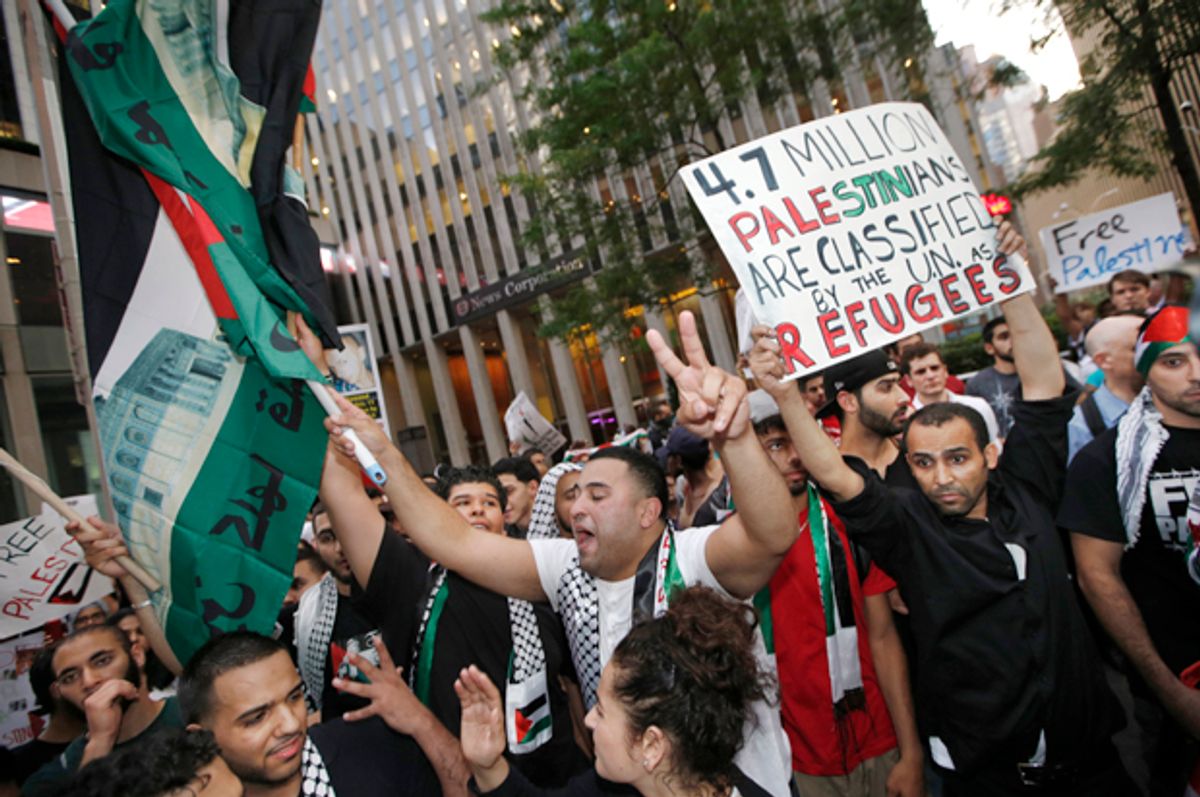 McCarthyism has re-emerged in U.S. politics, legal organizations warn, and its new targets are advocates for Palestinian human rights.

The first bill would prohibit making investments or state contracts with groups and individuals who boycott Israel and other U.S. allies; it was rushed through the legislative process and adopted by the New York State Senate in late January.

The bill, S6378A, essentially asks the government to create a blacklist of people, organizations and companies that support Boycott, Divestment and Sanctions, or BDS, an international grassroots movement that promotes nonviolent economic means to pressure Israel into complying with international law and respecting Palestinian rights.

Another similar bill, S6086, is being considered in committee. Both bills have bipartisan support. S6378A is sponsored by Republican Jack Martins, and S6086 is sponsored by Democrat Michael Gianaris. Each has co-sponsors from both parties.

The National Lawyers Guild, the Center for Constitutional Rights and Palestine Legal issued a legal memorandum to New York state legislators in response to the state senate's vote on S6378A. The legal organizations called the two bills "McCarthyist," noting they "harken back to the McCarthy era when the state sought to deny the right to earn a livelihood to those who express controversial political views."

"The courts long ago found such McCarthy-era legislation to be at war with the First Amendment," the legal organizations said, insisting the bills "unconstitutionally target core political speech activities and infringe on the freedom to express political beliefs" and requesting they be withdrawn.

The text of S6378A calls for punishing groups that boycott not just Israel, but all "American allied nations," which it defines as Israel, Ireland, Japan, Korea, all members of NATO (this includes most of Europe and Turkey), countries that signed the Southeast Asia Treaty of 1954 and any country that is a signatory of the Rio Treaty of 1947 — excluding Venezuela, which it singles out. The bill would allow Americans to boycott Venezuela, whose democratically elected socialist government the U.S. helped overthrow in 2002.

Rahul Saksena, a staff attorney at non-profit advocacy organization Palestine Legal, told Salon that, although S6378A tries to present itself as balanced, it "clearly targets those who support boycotts for Palestinian freedom."

"While it may be drafted to include a fairly bizarre list of 'allied nations,' the intent, as described in the official sponsor's memo and by legislators' public statements, is to punish BDS," he said.

"It's frightening to think there could be New York state employees scouring the internet for pro-BDS Facebook posts, tweets and news articles, and blacklisting individuals based on their political viewpoints," Saksena continued. "It's 21st century McCarthyism."

S6378A is being considered for a vote in the state assembly, and could technically be passed at any time, but could also potentially stall and end up taking months to make it to a vote.

There has been little reporting on the legislation. Palestinian human rights organizations have mobilized against it. The U.S. Campaign to End the Israeli Occupation created an action alert about the bills in late January.

The National Lawyers Guild, the Center for Constitutional Rights and Palestine Legal argue the legislation constitutes an attack on the freedom of speech, and is likely even unconstitutional.

"These bills are disturbing attempts to punish and chill constitutionally protected speech," Saksena told Salon. "The government cannot punish individuals and entities because of their speech and political views."

"We believe that under a court's scrutiny, these bills would be found unconstitutional," he added.

New York's two bills come among a series of other pieces of legislation that have been introduced, and in some cases passed, in numerous other states, including Illinois, Tennessee, South Carolina, Florida, California, Virginia, Pennsylvania and Indiana.

The legal groups see these bills as part of a larger pro-Israel campaign that stifles free speech in an attempt to beat back the gains of the growing BDS movement.

"Less than a year after billionaire and right-wing political megadonor Sheldon Adelson announced he was pouring tens-of-millions of dollars into anti-BDS efforts, we're seeing dozens of bills introduced in Congress and state legislatures aimed at suppressing our First Amendment right to engage in boycotts for Palestinian human rights," Saksena explained.

"These legislative initiatives are one tactic in a broader effort by Israel advocacy groups to suppress our right to speak out in support of Palestinian freedom," he said.

The Center for Constitutional Rights and Palestine Legal documented the larger anti-BDS campaign in their report "The Palestine Exception to Free Speech: A Movement Under Attack in the U.S."

Between January 2014 and June 2015, Palestine Legal says it responded to nearly 300 incidents of suppression, 85 percent of which targeted students and professors, on more than 65 U.S. college campuses.

There is little information available about what groups are lobbying on behalf of these pro-Israel bills, but right-wing organizations like StandWithUs and conservative Christian Zionist groups like Christians United for Israel and Proclaiming Justice to the Nations have publicly called for anti-BDS campaigns.

Eugene Kontorovich, a law professor and Washington Post blogger, testified before Congress in July 2015, demonizing the BDS movement and proposing a template bill pro-Israel groups have circulated. Kontorovich is also listed by the Jerusalem Center for Public Affairs as a settler in an illegal Israeli settlement in the occupied West Bank, although this is not revealed in his biographical statement in his congressional testimony or on his Washington Post blog.

A representative of social justice organization Jewish Voice for Peace told Salon that the backlash from elites shows BDS is having a big impact. "I think it's a sign of the growing power of BDS that there is such legislation," she said.

"Those who support human rights boycotts — like the boycott of Israel — see boycotts as a peaceful means of putting an end to injustice, just as supporters of the Montgomery bus boycott in the 1950s, of the California grape boycott in the 1960s, and of the boycott of apartheid South Africa in the 1980s saw those boycotts as a means of overcoming other forms of injustice," the National Lawyers Guild, the Center for Constitutional Rights and Palestine Legal wrote in its legal memo.

The legal organizations added, "While some may disagree that one or another of those boycotts addressed injustice, just as proponents of these bills presumably disagree with those promoting the Palestinian cause, the law is well settled that participation in and support of such boycotts is a form of political expression fully protected by the Constitution."