In New Hampshire, rallies and protests speak volumes about what's motivating Democrats and Republicans in race for White House 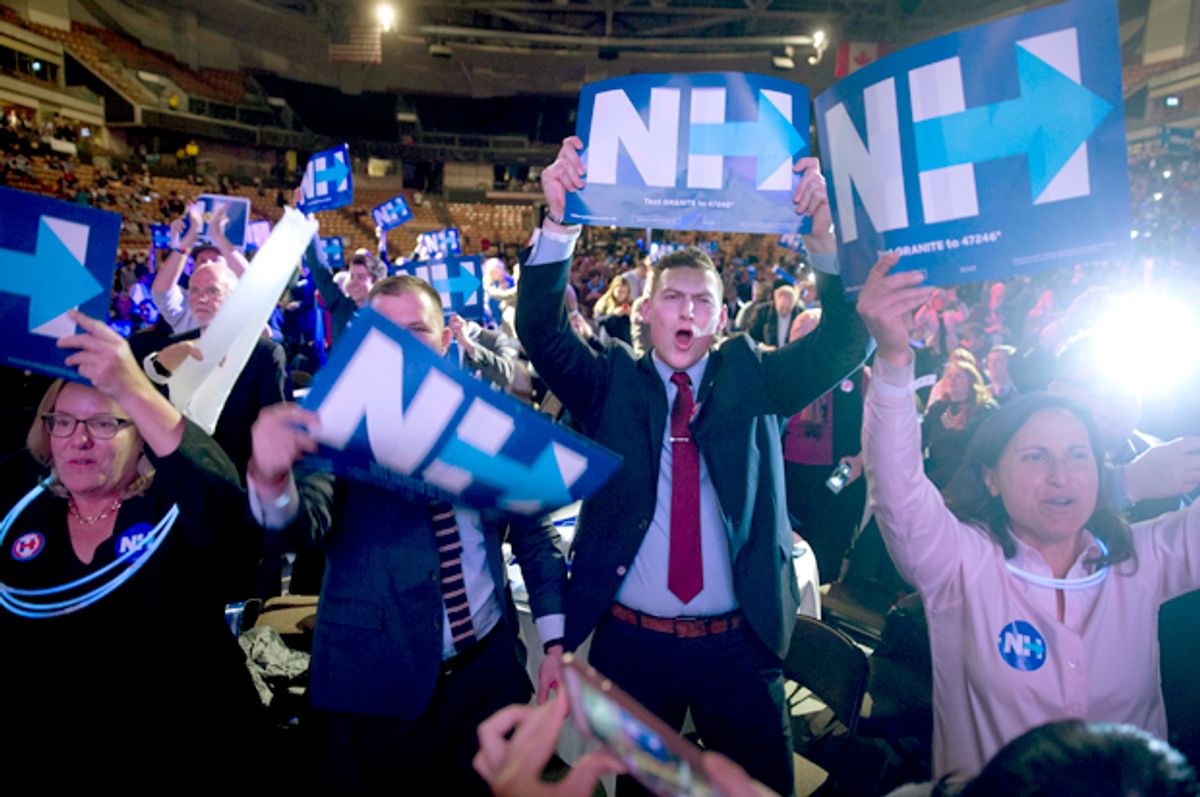 Outside the Paul Creative Arts Center at the University of New Hampshire’s campus, site of last Thursday night’s Democratic debate, something called the Leftist Marching Band is trying to entertain the crowd as it waited for the doors to open.

The Leftist Marching Band, out of Portsmouth, New Hampshire, is a 10-piece brass-and-drum-and-accordion ensemble that plays all sorts of old standards and folk songs. It is fronted by two women dressed like a cross between drum majorettes from an asylum house marching band and Carol Kane playing the Penguin’s mother on “Gotham.” That night their issue is climate change, and when the two frontwomen are not twirling batons and dancing, they are waving dolphin-shaped signs that read “Ark Builders Wanted!”

The antics of the Left Marching Band fit right into what feels like a low-key carnival here on debate night. The campaigns of Hillary Clinton and Bernie Sanders may have exchanged sharp criticisms in recent days, and their online supporters might have vehemently gone after each other. But at the University of New Hampshire, everything feels rather good-natured. Most of the students don’t even appear too interested in the debate. They are college students, after all, and it’s a Thursday night. There are classes to study for, and Coors Light is $2 a bottle all night at Libby’s Bar and Grill, a popular hangout just off campus.

The Leftist Marching Band loses an audience when the debate organizers open the doors to the theater. So the group heads up the street past the TV trucks to join the band of Sanders supporters at the corner of Academic and Arts Way. It’s not a huge gathering. There are maybe 75 people waving signs and bringing back some old chants from the Occupy Wall Street protests: “The people united will never be defeated” and “We’re unstoppable, a better world is possible!” both get plenty of run. There is a little confusion for a few minutes as the LMB doesn’t coordinate with the supporters, so at first the ringing of trumpets and drums drowns out the chants. Eventually, though, they get it sorted out.

Of course, any protest on the right or left will bring out characters pushing fringe issues. That night it was a group of Hasidim who are part of Neturei Karta, the anti-Zionist Jewish group that believes Jews cannot have a homeland until the Messiah returns. To that end, the group has long called for the Jewish state to be dismantled, which has led them to become an ally in the fight for the liberation of Palestinians and the re-establishment of Palestine. These men are a jarring sight next to the students, a half-dozen Hasidim in their trademark all-black outfits, their peyos (those long ringlets of curls of hair) dangling from underneath their hats.

Liberals of a certain age might wince at the sight of these men, recalling how the inclusion of adherents of any and all issues, no matter how wacky (few liberals pushing for Palestinian statehood also advocate the full destruction of Israel) may have kept the Occupy protests from coalescing around a clear and definable goal. Or, further back, how the left’s lack of focus helped derail protests of the second Gulf War in early 2003. It’s a problem with protests on the right as well, though arguably what used to be considered fringe has moved into the Republican mainstream. Which is how stuff like this happens.

Down the street, a smaller band of Hillary Clinton supporters has set up shop next to a parking lot. Since they are farther away from the debate venue, fewer onlookers have wandered down to gawk at them. There are lots of call-and-response chants of “Madam…President” and “I believe…that she will win” led by a couple of enthusiastic organizers. What’s striking is not the smaller size of the group – Sanders, after all, is still leading Clinton by at least 20 points. No, what’s jarring is the contrast between what the two groups advocate for. The Sanders folks might be a mishmash, but you can see the outlines of an agenda: fighting climate change (a big issue with New Hampshire voters), getting big money out of politics, breaking up the big banks. There may be a cult of personality surrounding their candidate, but it is in service of larger ideas.

The Clinton people, by contrast, say nothing about the issues, even though their candidate has well-documented positions that she will claim to fight for. It’s the difference between being the agent of “smashing the system” and the agent of cautious, transactional politics. Political observers might mostly think “Judicious use of the levers of power to manipulate the government and make incremental advances in progressive causes while fighting continued rear-guard attacks from Republicans against the successes of the Obama administration” is the more realistic approach to governance in this age of hardened polarization, but it just doesn’t fit on a sign or make for a nifty chant.

Just before the debate’s 9 p.m. start time, the Sanders people abandon their prime real estate location, allowing the Clinton supporters to move in and have a few minutes chanting in front of a larger group of onlookers. No one seems to know if this move was arranged by the leaders of the two camps, but if so, it’s a decent gesture and a reminder of something important. The Republicans are running campaigns of subtraction based on all the Obama achievements that the candidates will destroy on their first day in office – repealing Obamacare, ripping the Iran agreement to shreds, rolling back environmental regulations. Which is why every GOP rally I’ve attended this week feels like a scene Goya might have painted while zonked out of his gourd on mescaline and absinthe.

The Democratic candidates, by contrast, might disagree on just how far and fast they can push the party within the constraints of their not controlling all the branches of government. But they are both running campaigns of addition, not subtraction, and that makes all the difference.