It's a special club and you're not in it: Being in the same social class as the Wall Street bank you're borrowing from pays off -- just ask Timothy Geithner

Geithner's name and associations can get him a lucrative loan from a powerful institution. It's depressingly normal 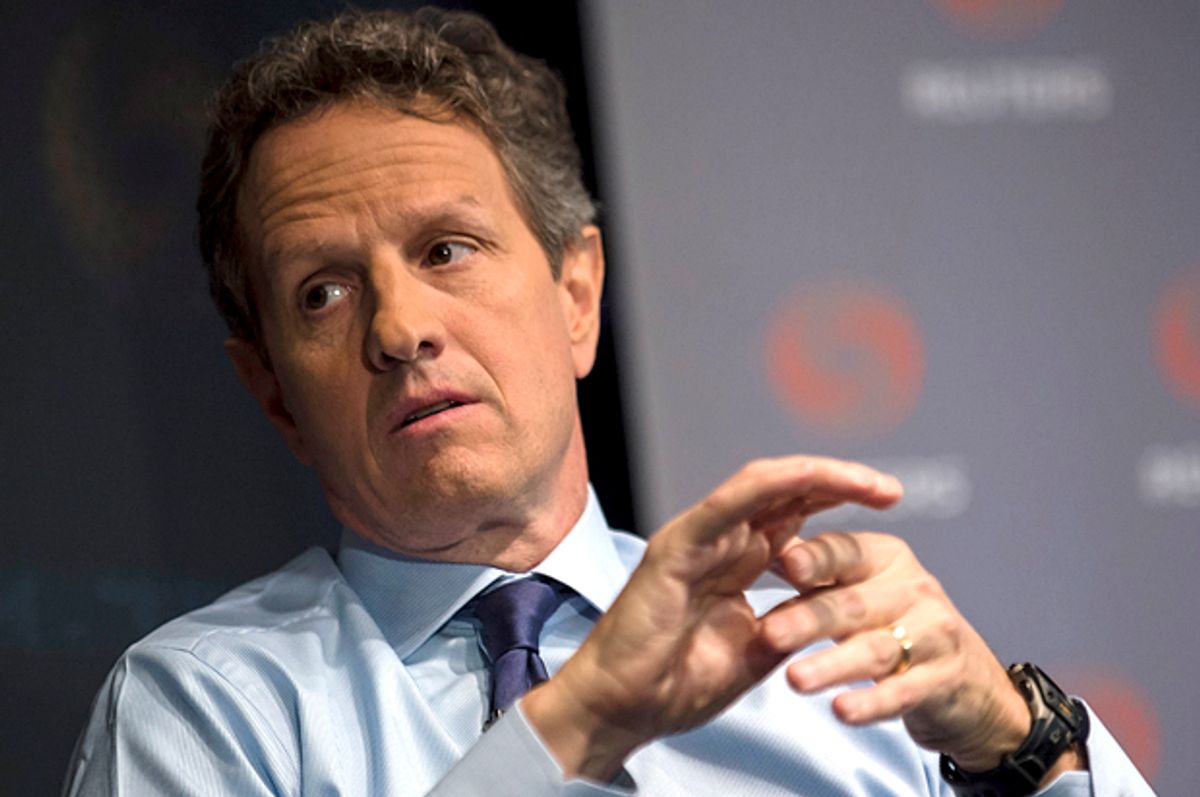 Among the takeaways from Timothy Geithner’s 2014 memoir "Stress Test" is his contention that the financial system is safer and more stable today. And central to that improvement are the stiffer capital requirements, buffers of liquid assets for financial institutions so they can absorb their own losses.

With stronger capital standards, banks must “hold more financial reserves against risk and to fund themselves more conservatively,” as Geithner said in a 2012 speech while Treasury secretary. This has long been a Geithner concern; he wrote in his book that he fretted about low capital levels as far back as 2003. Taking risks with borrowed money created the instability that magnified the crisis, Geithner believes, and financial firms should never fund themselves so greatly with other people’s money.

This concern does not extend to Geithner’s personal life.

Now out of government, Geithner serves as a top manager for private equity firm Warburg Pincus, whose entire business model is based on exploiting leverage to rake in large returns through borrowed funds. Warburg Pincus is starting a new, $12 billion private equity fund, which the managers plan to supplement by kicking in their own stake. And Geithner, instead of using his own cash, is borrowing the money.

He’s borrowing it from a mega-bank, JPMorgan Chase, one of the recipients of $25 billion in bailout funds administered by Geithner after the 2008 crisis. By using a line of credit with Chase rather than hard dollars to invest in the Warburg Pincus fund, Geithner will enjoy higher returns if the fund succeeds. But if it fails, he will not have the money to pay Chase back.

That is a miniature version of the bank capital standards debate: Should we allow greater instability and cascading risk by letting market participants borrow large sums of money to gamble instead of using their own resources? Geithner appears to disfavor such arrangements for the banking industry, but really likes them for himself.

The reason private equity partners use their own dollars when starting a new fund is to prove to investors that their interests match up. This way, partners looting the fund with high management fees would hurt their own positions in the fund as well as investors’. But Geithner borrowing the money gives him a perverse interest to make back that stake through whatever means necessary to pay off the loan. So there’s a financial instability and investor protection concern here, in addition to the double standard.

JPMorgan’s perspective is worth considering as well. If you or I walked into one of their branches and asked for a loan in the millions of dollars (the expected amount Geithner would be asked to pony up) for the explicit purpose of investing it in a high-risk “locked” vehicle, where the money cannot be extracted for several years (that is the typical arrangement for a private equity fund), I imagine they would laugh at you. That’s especially true if you, like Geithner, lived on a government salary for the bulk of your career, making 1 percent money but nowhere near the .001 percent needed to secure such a blatantly risky loan.

So something else would have to be part of the equation for JPMorgan to feel confident in lending into such risk. Payback for Geithner’s light regulatory touch is not an impossible scenario, but perhaps overstated. More likely, Geithner is an upstanding individual working for a very powerful private equity firm, and it doesn’t make sense for a big bank to anger anyone in the same social class. In fact, the links are explicit: David Coulter was vice chairman of JPMorgan before becoming managing director of Warburg Pincus, and the two firms have collaborated on multiple deals, as is true of virtually any two Wall Street giants.

In other words, a man with Tim Geithner’s financial profile can get a lucrative line of credit from a top Wall Street bank because of his name and associations. It’s a special club and you’re not in it. And when members of that club, in a previous life, regulate the institutions that can give them these special benefits, well, the word “unseemly” comes to mind.

It’s not the novelty of this, then, that reeks, it’s the depressing normality, as Matthew Yglesias points out. The typical course of affairs is that a Democratic Treasury secretary either comes from a Wall Street bank himself (sadly, the Department of the Treasury has never had a female secretary) or, upon appointment, becomes the type of person who can comfortably move in those circles. “It’s not a scandal, it’s just how the game is played,” Yglesias writes.

When I talked last week about the divide in the Democratic Party, this is definitely part of it. The talent pool for high-level jobs in Democratic administrations has been artificially narrow for far too long. Many liberals reject a status quo of seamless, cozy relationships between leading policymakers and the industries they regulate. And they reject this kind of elite glad-handing, the velvet rope separating those with power and those without.

People like Barney Frank call this the McCarthyism of the left, the idea that anyone who takes Wall Street money or accepts a job in the financial services industry has unclean hands. But that assumes that critics of the elite consensus have any agency to intimidate or bully. The real problem, from Frank’s perspective, is that outside pressure makes it harder to try on a cloak of populism every couple years to get the rubes’ votes, while running the country as they see fit in the meantime. I’m sorry to be so annoying, but given the elite track record of the past couple decades, I think the rubes have the right to be a little perturbed.

The question is not whether Tim Geithner should be disallowed from making a living of his choosing in the financial industry. The question is why the self-proclaimed party of the people cannot find men and women to represent it who would be the least bit embarrassed at such a spectacle.