Paul LePage demands credit for his racist rhetoric: "I had to go scream at the top of my lungs about black dealers coming in" to get more DEA agents 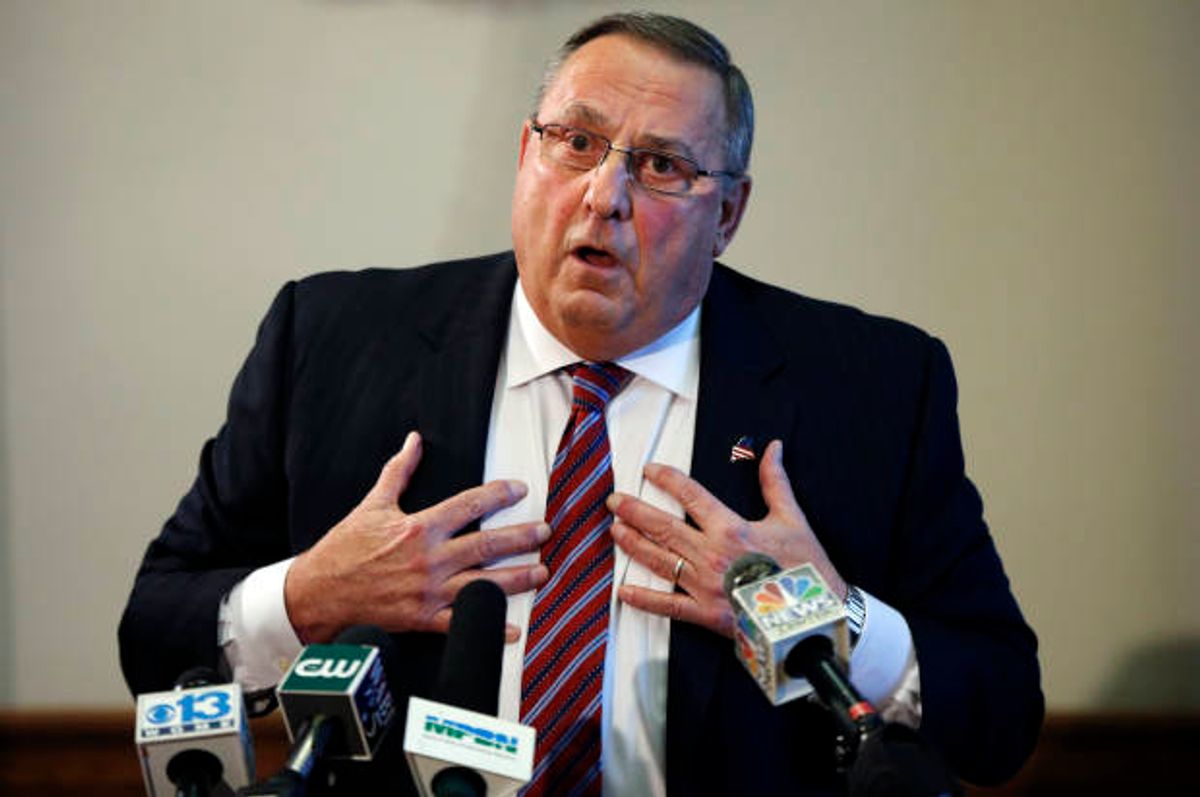 Gov. Paul LePage speaks at a news conference at the State House, Friday, Jan. 8, 2016, in Augusta, Maine. LePage apologized for his remark about out-of-state drug dealers impregnating "young white" girls, saying it was a slip of the tongue. (AP Photo/Robert F. Bukaty) (AP)
--

After initially denying that he used coded language to warn of black drug dealers entering his state and impregnating white women, Maine's Republican Governor Paul LePage now wants credit for heroically raising awareness "about black dealers coming in and doing the things that they’re doing to our state."

As the Huffington Post's Amanda Terkel reported, LePage made the comments on Tuesday during an interview on WVOM's "George Hale and Ric Tyler Show."

LePage, whose controversial statements have resulted in such a contentious relationship with his legislature that he skipped out on delivering his annual State of the State address recently, opened the interview defending his decision to send a supplementary letter to the Maine legislature instead, complaining that none of his legislative priorities have any chance of passing.

"Your confidence of getting much done is limited," LePage lamented. When pressed about his inability to effectively grapple with the state's immediate needs before the elections in November, LePage insisted that he had done his best to get additional resources when he with the state's heroin epidemic when he warned of out-of-state drug dealers "with the name D-Money" who" impregnate a young, white girl before they leave."

"I had to go scream at the top of my lungs about black dealers coming in and doing the things that they’re doing to our state," LePage said during his interview. "I had to scream about guillotines and those types of things before they were embarrassed into giving us a handful of DEA agents. That is what it takes with this 127th [legislature]. It takes outrageous comments and outrageous actions to get them off the dime."

Of course, LePage had previously denied that his statement that "guys with the name D-Money, Smoothie, Shifty ... come up here, they sell their heroin, and they go back home," was in any way a coded reference to black men. At the time, LePage added that the "incidentally, half the time they impregnate a young, white girl before they leave, which is a real sad thing because then we have another issue that we've got to deal with down the road."