Of course it's not over. But Bernie's big win has shifted political reality, and made conventional wisdom worthless 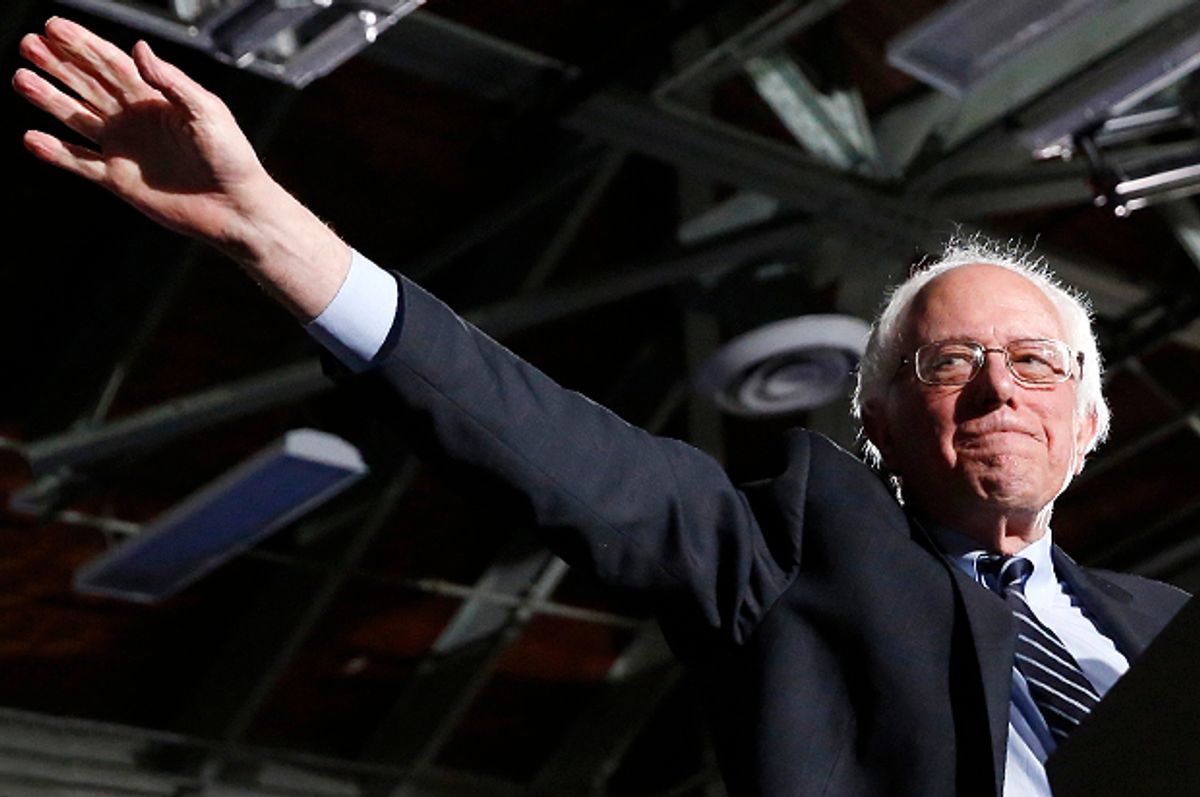 CONCORD, N.H. — I had barely made it past the Secret Service checkpoint and into the press room at Bernie Sanders’ election-night headquarters — said press room being, at other times, the cafeteria of Concord High School — when the polls closed and Sanders was declared the winner of the New Hampshire primary. Reporters were wandering around prodding the deli sandwiches, and the gym where Sanders would later give his victory speech was nowhere near full. People cheered and waved their “A Future to Believe In” signs for the cameras. (Let’s be honest: Not a great slogan.) It didn’t feel like a huge moment.

The historic scale of the moment took a while to settle in, as did the unexpected scale of Sanders’ victory. An hour and a half later, while the Vermont senator was delivering the same fire-breathing speech he’s been giving for the last several months — presumably to a national audience much larger than any he has addressed before — a group of his aides were clustered in the back of the gym, embracing each other and laughing and crying. And checking multiple electronic devices, of course, as the almost unbelievable data rolled in. Can we pause a second to consider the extraordinary fact in my first sentence? Bernie Sanders, who was viewed when he got into the race as a semi-endearing protest candidate, now has the Secret Service with him wherever he goes.

No self-described socialist has ever won a major-party primary election before. Neither has any Jewish candidate. (Nope, irritating Joe Lieberman never won anything, except every event in the Pomposity Olympics.) I think it’s important to take a moment and acknowledge those things, which would have seemed inconceivable even two or three years ago. Hillary Clinton’s supporters are already spinning this defeat furiously on social media, and that’s fair enough. Politics goes on and this race is nowhere close to decided. But even if political gravity is restored and Clinton wins out from here, New Hampshire 2016 was closer to an earthquake than a blip. It marks a Lazarus-like moment of rebirth for the American left in electoral politics, a historic breakthrough that most people my age thought we would never see.

The cantankerous Jewish socialist from Burlington by way of Brooklyn didn’t just defeat Hillary Clinton, which by now we had come to expect. He blew her out of the water, with roughly 60 percent of the vote and (at this writing) a 21- or 22-point margin. Sanders won in all regions of the state, which is not large but encompasses three middle-sized cities, some college towns and far-flung rural communities and the northern suburbs of Boston. He won the female vote overall, and nearly 70 percent of women under 45. He won every income slice except voters making more than $200,000, not a fact Clinton is likely to trumpet in the days ahead. (Clinton won among senior citizens and, more significantly, narrowly carried nonwhite voters, who were just 7 percent of the total.)

I don’t have any idea what will happen now. We have been in uncharted waters since the beginning of this campaign, in both political parties, and now we have sailed off the map into an unknown universe where the laws of physics no longer apply. In writing about this election season, I have tried to avoid becoming a cheerleader for Bernie Sanders or anyone else. There are many reasons for that, starting with the fact that I think that’s boring and is likely to impair my judgment. It feels like abdicating one of a writer’s principal tasks, which is not to feel too much sympathy for the people in your stories. In this fascinating Democratic two-hander, both candidates have abundant flaws. The question of who will win has seemed obvious all along, and the question of who should win didn’t much seem to matter.

But I couldn’t help getting caught up in the wave of emotion sweeping across the gym floor in Concord on Tuesday night. Lots of us in the press section were giving each other little looks, like: Wow, we’re here, and this actually happened. I took a selfie while Sanders was talking in the middle distance behind me. (I was not alone, I swear.) I shook hands with a few campaign staffers and told them they had done something amazing. Then I started to think about the way reality had just shifted. A friend of mine who favors Hillary Clinton has continually challenged me about whether I thought Sanders would actually be an effective president. I said I had no idea and it was academic. It might not be academic now.

I have repeatedly endorsed the conventional wisdom that Clinton has enormous institutional and political advantages and that the Democratic nominating process was constructed to favor her, or someone exactly like her. If you take a hardheaded look at the political calendar, it still looks that way. Both campaigns now have to move from local to national, from micro to macro. At least 24 states hold primaries or caucuses between now and March 15, and many of those are big, delegate-rich states where Clinton is well organized and well connected and Sanders remains largely unknown.

But as even Nate Silver will probably agree now, this is a fluid situation loaded with unknown unknowns. Chris Matthews unloaded several crates of political-science wonkery last night on MSNBC, much of it fairly dire for Hillary Clinton: She has never tracked upward in the polls, in any race she’s ever run, and appears to have an “electoral ceiling.” Clinton’s campaign has had months to prepare for the possibility that she might lose Iowa or New Hampshire or both. But there was no way to prepare for a 20-point blowout in a state she won eight years ago, where she is well known and well liked, or for extraordinarily volatile national polls that suggest her lead over Sanders has greatly diminished and may have disappeared. Those famous $27 donations are flooding in today by the thousands. Clinton's inner circle is feeling the Bern, and it's a distinctly unpleasant sensation.

As Clinton discovered in 2008, you can’t strategize your way out of the widespread perception that you’re on the wrong side of history. It is beyond bizarre that she faces that predicament now against a disheveled old guy with a discernibly ethnic accent, who comes from one of the smallest states in the nation and would be the most left-wing major-party nominee since forever. I don’t even know. Since FDR for sure, and maybe since William Jennings Bryan, but the eras are so different that comparisons don’t make sense. In case you hadn’t noticed, “beyond bizarre” has been the defining characteristic of this election to date.

If you believe that the pervasive sexism and misogyny that has clouded our view of Hillary Clinton throughout her career in public life has once again taken a toll, I agree. I would argue that it’s an insidious societal issue more than anything else; abusive online creeps do not speak for Sanders or his campaign, which has foregrounded feminist positions and features numerous women in prominent roles. His New Hampshire rallies have looked roughly gender-balanced to me and displayed no discernible frat-boy energy. I do not believe that sexism can account for what happened here on Tuesday, but as always Clinton faces a situation where any tactical decision she makes — to run a more aggressive and confrontational campaign, for instance — will be perceived through the lens of misogynistic stereotype.

There are big and obvious questions about whether Sanders can compete in states where the Democratic electorate is not largely composed of white liberals. Clinton’s visit to Flint, Michigan, last weekend was one of many signals that she hopes to shift the focus toward communities of color. Long before Sanders took the stage in Concord, his campaign strategist, Tad Devine, held an impromptu press conference to address this. Despite the Sanders campaign’s outsider image, Devine is a seasoned pro with deep roots in Democratic politics, going back to the Jimmy Carter campaign of 1980 (which I imagine he would rather forget).

He said exactly what you’d think he would say: They were doing intensive outreach in Latino and African-American communities, and those voters would love Bernie once they got to know him. Whether that will work I have no idea, but there is no doubt that the Sanders campaign has diversified intensely: There were a significant number of black and brown faces in Concord on Tuesday night. What I got out of it was that Devine thinks Sanders can compete in Nevada but is prepared to punt in the heavily African-American and Christian context of South Carolina, although I’m sure he wouldn’t put it that way.

In another room, press secretary Symone Sanders, the campaign’s most prominent African-American (no relation to the candidate), was telling a European radio reporter that Bernie’s troops were ready to take his message to the grassroots in the black South, to “the barbershops and churches and soul-food restaurants.” That's admirable, but it also sounds like an improbable hill to climb in the three weeks between now and Super Tuesday. How probable was it that we would find ourselves here, with a wild-haired geriatric socialist absolutely creaming Hillary Clinton in the first Democratic primary? I say again, Bernie Sanders has a Secret Service detail. As I worked my way to the exit, I saw a couple of his agents celebrating this historic night with a Concord High School delicacy known as “Bag-o-Tacos.” I assume they were off duty.