Even though his peers loved the dress and he wasn't bullied for it, the principal said the costume was "dangerous" 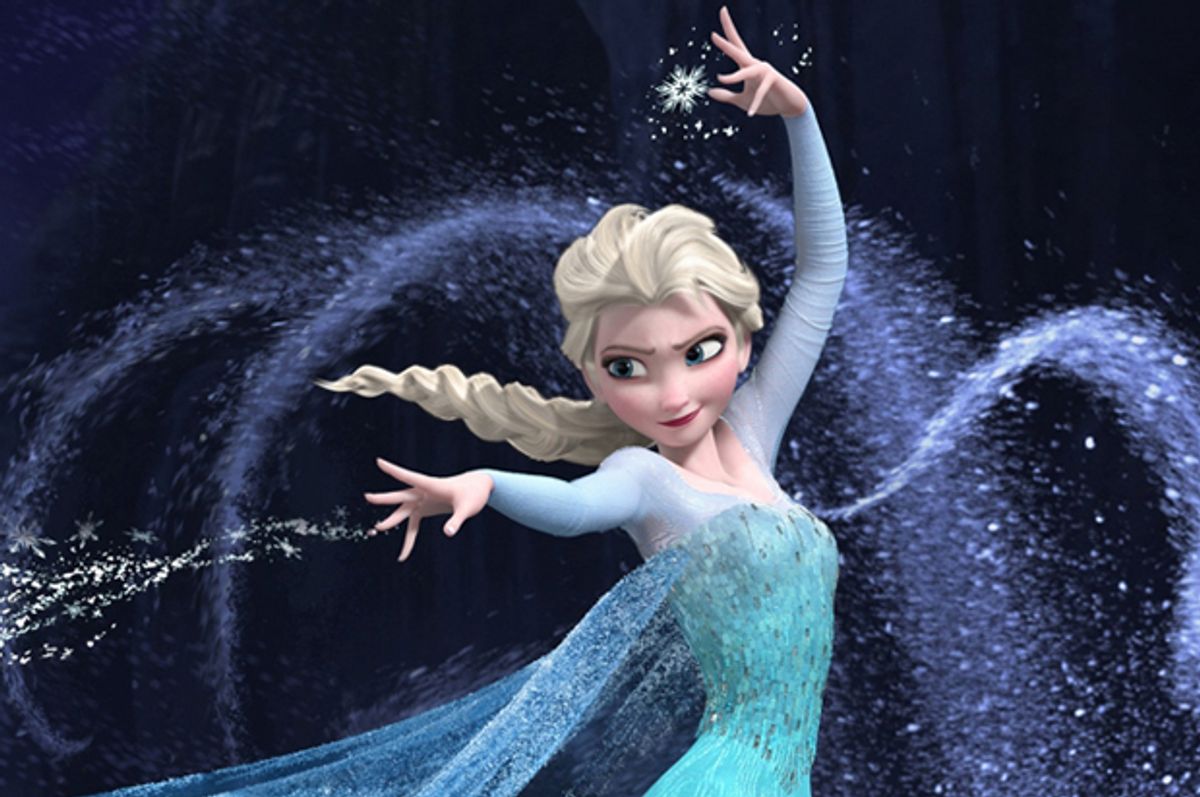 Last week, a 13-year-old male middle school student in Menifee, California named Austin Lacey was sent home from his school’s spirit day, where students were encouraged to wear Disney-themed costumes, because he dressed up as Elsa from "Frozen." Was he sent home because he was bullied? No. He told KTLA “his classmates loved the idea and asked him to pose for selfies.” But the school’s superintendent issued a statement declaring, “The Principal's action was based upon the need to stop a general disruption to the school environment.”

Think about that for a minute—it wasn’t his peers taunting him for daring to defy gender norms when dressing, but school officials codifying what’s acceptable attire during a day devoted to fictional characters, all in the name of not causing a “disruption.” Their own warped notion is what’s wound up causing a disruption, not a student who did what he was asked to do, and wore the outfit “for fun,” as he told KTLA.

In a Facebook post about the incident (via Buzzfeed), Lacey’s mother, Brooke Francev, wrote that the principal told her her son’s outfit was “dangerous” and that "[he] confirmed directly to me it was not okay for any child to dress as the opposite sex because it was too distracting. The statement made to me was, ‘It is not okay for boys to dress like girls or girls to dress like boys.’”

The school’s actions, in fact, are what’s dangerous, not to mention offensive and outdated. They have no business in an educational institution for today’s teens, and doing so only shows that they want to enforce sexist, rigid rules that have no benefit to students save for teaching them that judging people based on gender is acceptable. Thankfully, Lacey did not simply kowtow to the school’s sexist standards. In fact, he encouraged his fellow students to cross-dress in the name of supporting the LGBT community, according to another post on his mom’s Facebook page.

The school’s actions are out of touch with what the rest of society has figured out: that boys in dresses (and conversely, girls wearing traditionally “male” clothing) are not a threat to anyone. First, let’s talk about Elsa; the character has captivated little boys and little girls. Social media is full of posts about boys who are proud to wear their Elsa dresses—and those who are thrilled to see kids being true to themselves:

In November, Jen Simon wrote about her five-year-old son’s penchant for dresses fashioned out of household items, which blossomed into an actual Elsa princess dress, which she, after some consideration, let him where to school:

He was a child. A nonsexual, imaginative, creative little person who wanted to express his love for a character by dressing like her. And there was nothing wrong with that. After all, what are the arguments against getting him a costume? That kids would make fun of him? He was the most sought-after boy in his class — the girls literally lined up to play “Princess” with him at school. That wearing a dress would make him feminine or gay? Do people still think that nonsense? If my kid wanted to wear a dress so badly that he’d trip over a blanket, I don’t think denying him some taffeta would sway who he found attractive. If he’s gay or transgender, then he is — playing dress-up won’t make him gay, and forbidding him to won’t make him straight.

This issue is not of course, limited to "Frozen," but Lacey’s example is one of many in recent months proving that teens and young adults are moving past limiting notions of gender and embracing a far more open-minded view.

In January, Jaden Smith was chosen to model the latest in women’s clothes from Louis Vuitton. Louis Vuitton artistic director Nicolas Ghesquière told The New York Times, that Smith “represents a generation that has assimilated the codes of true freedom, one that is free of manifestoes and questions about gender. Wearing a skirt comes as naturally to him as it would to a woman who, long ago, granted herself permission to wear a man’s trench or a tuxedo.” The actor has shared images of himself wearing dresses before, and last year posted on Instagram one such image with the caption, “Went To TopShop To Buy Some Girl Clothes, I Mean ‘Clothes.’”

In Clovis, California, last week, students at Buchanan High School deliberately cross-dressed in order to protest the school’s dress code. According to the Fresno Bee:

“The reason we switched gender norms for the day was to make the statement that what we wear does not define us as students,” Sledd said. “Our district’s dress code should not favor or discriminate any gender.

“We believe everyone should be able to express themselves equally. A boy with long hair is no less of a hard worker than a girl with long hair.”

And on the fictional front, last week saw the release of young adult novel "The Symptoms of Being Human" by Jeff Garvin, which features a gender fluid protagonist who grapples with bullying at school.

In other words, those in charge at Menifee Middle School who made Austin Lacey take off his Elsa dress and wig not only owe him an apology, they need to educate themselves on why their behavior is what’s truly dangerous—and on shaky legal ground. According to the ACLU of Northern California, “Schools cannot discriminate against you based on your sexual orientation, gender identity, or gender expression. Even if your school has a gendered dress code policy, you should still be able to wear the clothing and hairstyle allowed any student.”

Perhaps they should take a page from the UK, where the Office of the Children’s Commissioner sent a survey to students in Brighton and Hove giving the 23 options to describe their gender, including “non-binary,” “demi-boy” and “gender fluid.”

A spokesman for the Brighton and Hove City Council told The Argus, "We want all our young people to feel comfortable with who they are, to understand that the notion of gender can go beyond the traditional idea of simply being either male and female, and to recognise that people can use a range of terms to describe their gender identity." Hopefully the public support for Lacey’s costume will help bring his school advance its policies around what’s acceptable attire into the twenty-first century.