In theory, Hey! VINA sounds great—but the more I think about it, the less I want algorithms making friends for me 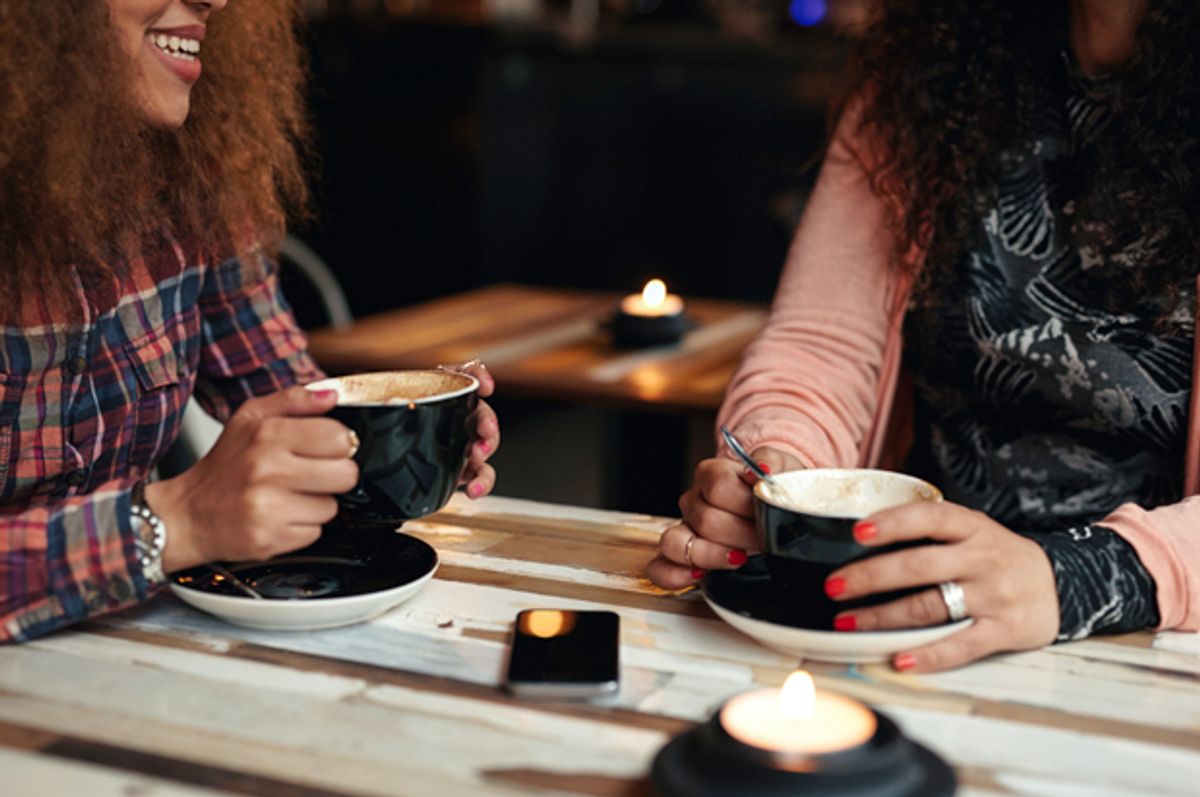 On the surface, I seem like the perfect candidate for the new helping-women-make-female-friends app Hey! VINA, which launched last month, the so-called “Tinder for girl friends.” In 2013, when I moved out of Brooklyn after 13 years to live with my boyfriend in suburban New Jersey, I left behind a wide network of friends and acquaintances. In a city of over 8 million people, I would generally run into someone I knew once a week on the subway or walking around or at a cultural event. I could call various friends if I wanted to have lunch or coffee during the day. I had friends whose children I’d visit, friends I went to see plays with, friends I went to movies with and filmed giggly video reviews afterwards—I pretty much had a friend for all occasions. Even if I wasn’t close with people, there were at least friendly faces at my usual haunts; I spent so much time at my local coffee shop, I was on a first name basis with the staff.

Whereas in New York I had multiple opportunities to make friends in various communities, from fellow comedy show attendees to trivia nerds, in suburbia, I’ve had more trouble clicking with people. I don’t go out as much, and since I work from home, most days the only person I see is my boyfriend. Often when he walks in the door at the end of a workday, I bombard him with every thought I’ve held inside for the last eight hours; he quickly goes from happy to see me to deer in the headlines at the barrage of random information I throw at him. I email and text my friends, augmented by occasional phone calls and even more occasional visits, but that’s not the same as looking into someone’s eyes. I’ve left my old friendships lapse to the point where I feel awkward calling people just to chat. In short—many days, I’m lonely.

So why won’t I be seeking a new BFF via this (or any other) app? Setting aside any logistical issues (Hey! VINA started out only serving San Francisco residents, with plans to expand to other cities), I simply don’t believe friendships, especially female friendships, can be crafted via algorithm. Hey! VINA cofounder and CEO Olivia June Poole told Fast Company, “We hope women find their new best friends, traveling partners, brunch dates, wing girls, mommy friends, workout partners, etc. on the platform.” That sounds great—in theory.

In real life, there are so many variables that go into making friendships click. Dating sites and apps work because we’re used to an often awkward, interview-like first date process. There’s more risk to our personal safety, and more uncertainty about what someone is seeking in the dating arena. It makes sense that there are various technological aids for people seeking everything from hookups to marriage. It’s assumed that you’ll have to slog through some basic getting-to-know-you questions before you get to the chemistry part of a date, no matter how you meet. But in my experience, female friendships aren’t like that at all.

With my female friends, I’ve often gone from saying hello to sharing some of the most intimate details about my life within minutes. By the end of a first meeting, I’m likely to know about a new pal’s family, relationship status (the kind that’s more complicated than a Facebook status update) and whether or not she plans to have kids. It’s a fast and furious process that feeds on itself, the type of energy fueling what Salon's own Kim Brooks called her “friendship affair.” We’re not evaluating each other based on traits we have in common, but going on intuition about whether we can trust this person to divulge our inner lives. That’s not a process that can be planned, however. I can’t tell just by looking at someone whether I’ll want to spill my innermost thoughts, but I can tell from hearing how they respond to me. It’s a spontaneous process I can never plan; that true connection either happens or it doesn’t.

For instance, I met one of my closest friends when she was interviewing me for a graduate school course. Within the next few hours, after the formal part of our day was done, we bonded over what I can only call “girl talk,” enough that the next time I saw her, I was helping paint her apartment.

But I highly doubt we’d ever be paired up by technology. I jokingly call her my “most conservative friend,” because she is, whereas I’m far more on the liberal end of the political spectrum. I haven’t asked her who she’s supporting in the Presidential election; I’m somewhat afraid of what the answer will be. We differ in other ways too — she had two wedding ceremonies, whereas I consider marriage a problematic institution; she wears designer clothes while I live in sweatpants. She often says things that flabbergast me, yet I appreciate that because she’s the only person I’m close with I can get that point of view from in a way I understand. Through her, I’ve learned you can be conservative on fiscal issues, and liberal on social issues, which has helped me be less judgmental and make fewer assumptions.

Despite our differences, though, I know she’d do anything for me and vice versa. We’ve talked through our worst relationship woes, family drama, and career issues. We’ve seen each other at our very worst moments and our very best. I’m never concerned about TMI with her. We never run out of things to say, both of us easily jumping from one topic to the next without the need to pause to catch up. It’s not that we’re unaware of our differences, but rather that we make them work for us. The things that make her a wonderful friend would never show up in a pithy survey. We aren’t friends because we’re both Natalie Merchant fans, though that’s a nice bonus; we’re friends because of whatever drew us to each other during those frenzied conversations whose details I can’t even remember that first day.

So I just don’t see how, for instance, a “six-question quiz detailing some of your personality traits, like whether you’re introverted or extroverted, or prefer coffee or wine,” can truly tell you what you want to know about someone you hope to form a lasting bond with. The factors an app can categorize are, I suspect, too superficial to contain the kind of chemistry I look for in a friend.

Hey! VINA is certainly not the first app to try to make us less lonely. There’s been previous iterations of friendship apps, including one designed to manage your friendships, and even an app for finding a cuddling partner. Last year, Fusion reported on people using dating apps to make friends, so clearly there’s a market for using some technical assistance when it comes to meeting new people. It makes sense that developers are looking for ways to help us form IRL connections at a time when many of us spend more time with our computers than perhaps any actual person, and I totally understand why people would flock to such apps. If you find a friend for life via swiping, I’ll be thrilled for you.

To be fair, the Hey! VINA isn’t promising it will create lasting friendships, simply facilitate them, but even that sounds questionable to me. The qualities I look for in a friend—loyalty, honesty, the ability to call them up at two in the morning, for them to hear the things I’m not saying as clearly as the ones I am, for them to share the things I don’t always want to hear, but still need to—don’t have to do with having hobbies or personality traits in common. They’re about something more magical, more abstract, the epitome of “I know it when I see it,” or in this case, feel it. And that’s something an app simply can’t plan.